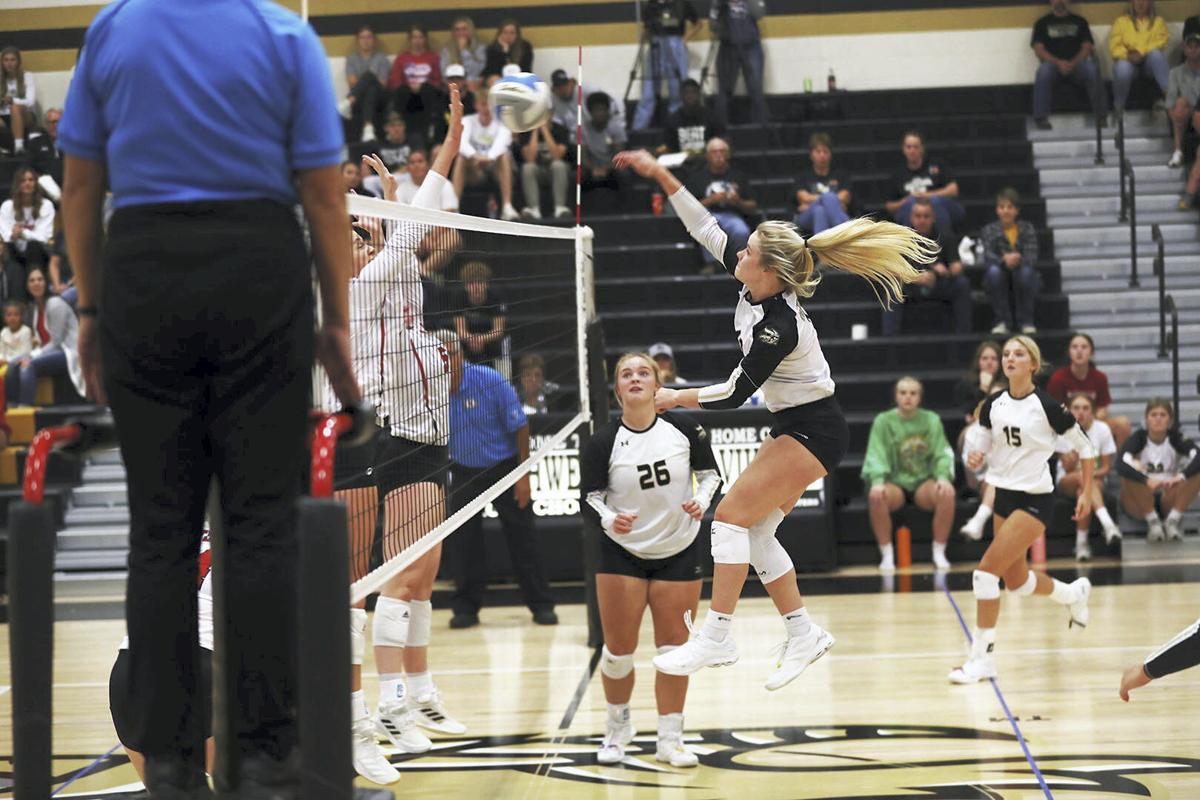 Northwest senior Chloe Mader goes in for the kill during the Viking's volleyball game against Elkhorn High on Monday Night. 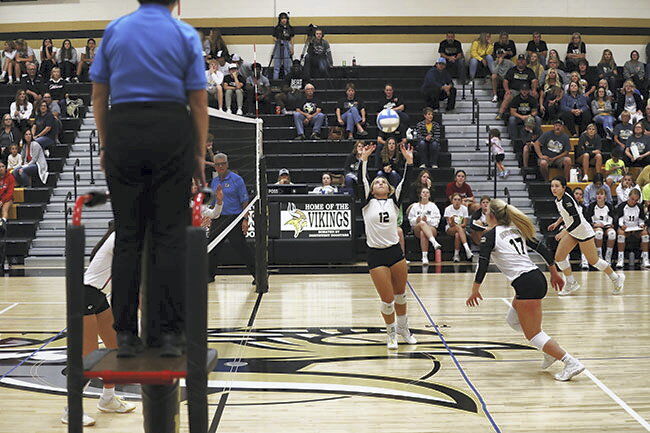 Macie Middleton of Northwest sets up the ball for teammate Chloe Mader to execute a spike. The Vikings played against Elkhorn High School at home on Monday. 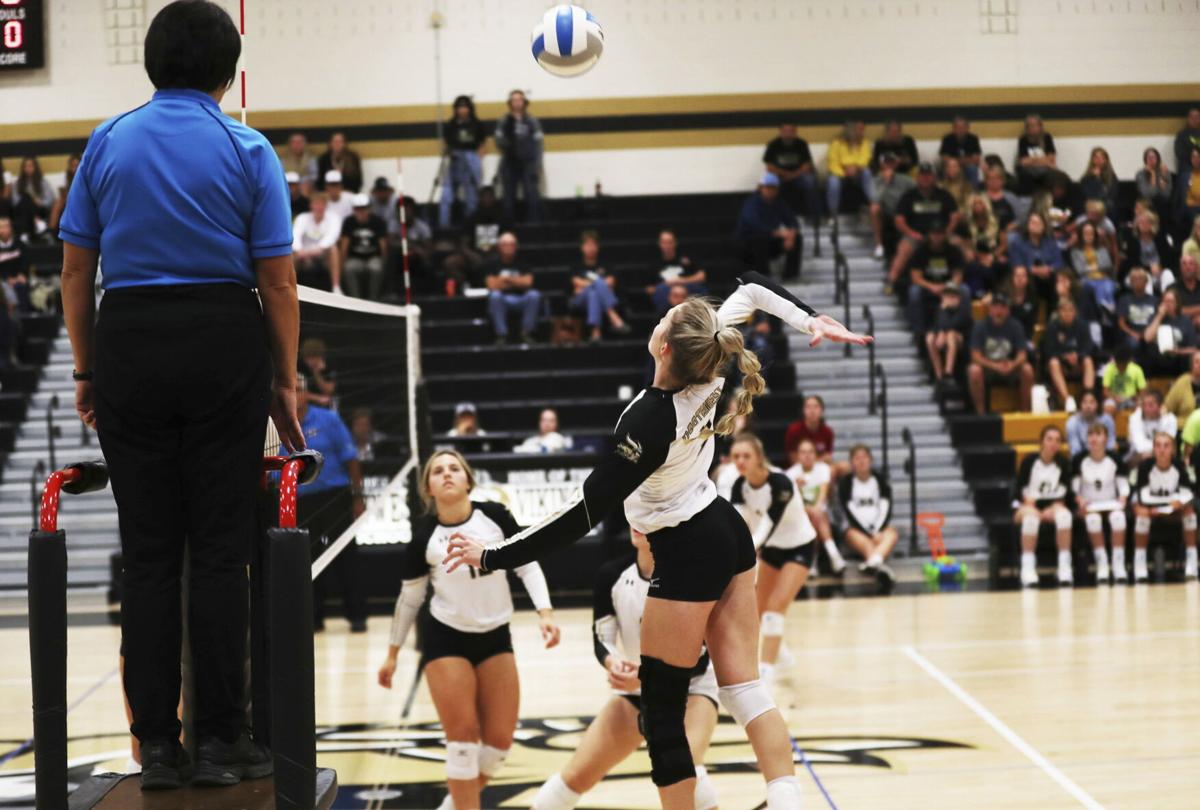 Senior Ashlynn Brown of Northwest High attempts to spike the ball across the net to earn her team a point. 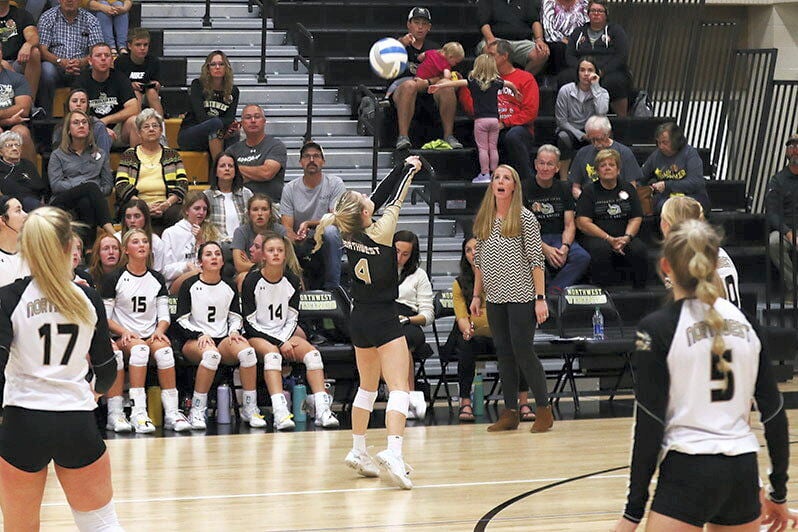 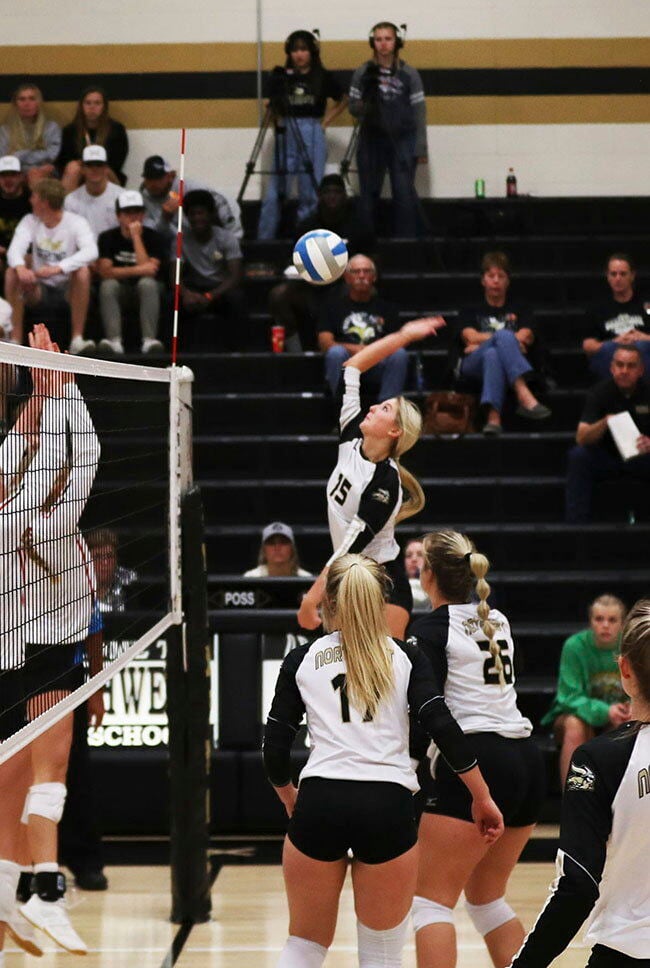 Northwest High School's Halle Palu catches air while attempting to spike the ball back to Elkhorn High for a point.

When Northwest had success Monday, it served tough enough to get Elkhorn out of system.

Unfortunately for the Vikings, they weren’t able to do enough of that during the match, especially in the later sets.

Middle attackers Taylor Bunjer and Haley Wolfe got involved in the offense and both pounded down 18 kills. Antler coach Morgan Johnson said that happened because they got back into system in the later part of the match.

Northwest coach Lindsey Harders felt the Vikings’ passing game broke down and that help lead to easy attacks for the Antlers. She agreed with Johnson that Elkhorn was able to handle Northwest’s serves better in the later part of the match. The Vikings did finish with seven ace serves but had only one in the final two sets.

“We served aggressively really tough in the second and third sets and that got them out of system. But in sets four and five, they served more aggressive and we weren’t in system and that hurt us,” she said.

In a back-and-forth first set, Elkhorn used a key 4-1 run that broke a 19-all tie into a 23-20 lead which ended on a Wolfe ace serve. A Macie Middleton ace serve help bring Northwest back to within 23-22, but after the two teams exchanged points, Elkhorn went up 1-0 on a Hannah Fast kill.

Ashlynn Brown powered Northwest to a 2-1 lead as she had eight of her team-high 17 kills in the next two sets.

Taylor Jakubowski served a 5-0 run that was keyed by three Brown kills to give Northwest a 19-11 set 2 lead.

In the third set, Whitney Loman served a 3-0 run that gave the Vikings an 11-7 lead early and then she closed out the set with a 4-0 run that ended with a Brown kill.

“We played really well in the middle two sets there,” Harders said.

But Wolfe helped give Elkhorn the early advantage in the fourth as she had two kills and three ace serves to give them a 9-2 lead. She later added two more kills to push the lead up to 19-11.

Elkhorn gained the early advantage in the fifth, thanks to four Northwest errors and a Skylar Mack ace serve for a 5-1 lead.

But Northwest scrapped its way back into the match, thanks to its defense. Sophia McKinney, Loman and Taylor Retzlaff kept plays alive and that allowed kills from Chloe Mader and Brown, along with a Halle Palu ace block, to tie the match at 9-all.

“We like to keep the ball in play a lot more and we did that a lot tonight,” Harders said. “I thought our back row made some outstanding plays tonight, especially Sophia and Taylor. They sacrifice their bodies a lot for us.”

However, a Wolfe kill gave Elkhorn the lead for good, then Ella Schutte served a 4-0 run to take it to match point. Palu had two straight kills to keep the match going, but a Wolfe kill off a Northwest overpass gave the Antlers the match.

Schutte dished out 46 assists for Elkhorn, while Anna Janvrin chipped in eight kills.

Johnson credited Elkhorn for hanging in against a strong Northwest defense that kept plays alive a lot during the match. She added that this was the first fifth set the Antlers had played in all year long.

“There was a resiliency from our girls tonight, just going after every ball. Northwest played great defense and put up a strong block against us. But we were able to making plays when we needed to,” Johnson said. “There was a lot of heart shown by the girls tonight as they had never played a fifth set until tonight. We got a lot of confidence when we got out to that early lead.”

Jakubowski and Palu each chipped in 12 kills, while Mader had 11 to go along with Brown’s kills. Macie Middleton had 31 assists, while Kinzi Havranek had 27. McKinney led the defense with 29 digs, while Loman added 24.

Harders said the Vikings were afraid to make errors in the later part of the match.

“When you gotta come down and try not to make an error, we struggled,” Harders said.

Northwest will be back in action during the Central Conference Tournament where they are the No. 3 seed. They will play at York Thursday against Schuyler at 6 p.m. and York at 7 p.m., then will head to Schuyler on Saturday and play Lexington and Aurora before the placement matches at either 3 or 4 p.m.

Here are the top hitters, pitchers and fielders who stood out on area diamonds throughout the past fall season.

Northwest senior Chloe Mader goes in for the kill during the Viking's volleyball game against Elkhorn High on Monday Night.

Macie Middleton of Northwest sets up the ball for teammate Chloe Mader to execute a spike. The Vikings played against Elkhorn High School at home on Monday.

Senior Ashlynn Brown of Northwest High attempts to spike the ball across the net to earn her team a point.

Northwest High School's Halle Palu catches air while attempting to spike the ball back to Elkhorn High for a point.