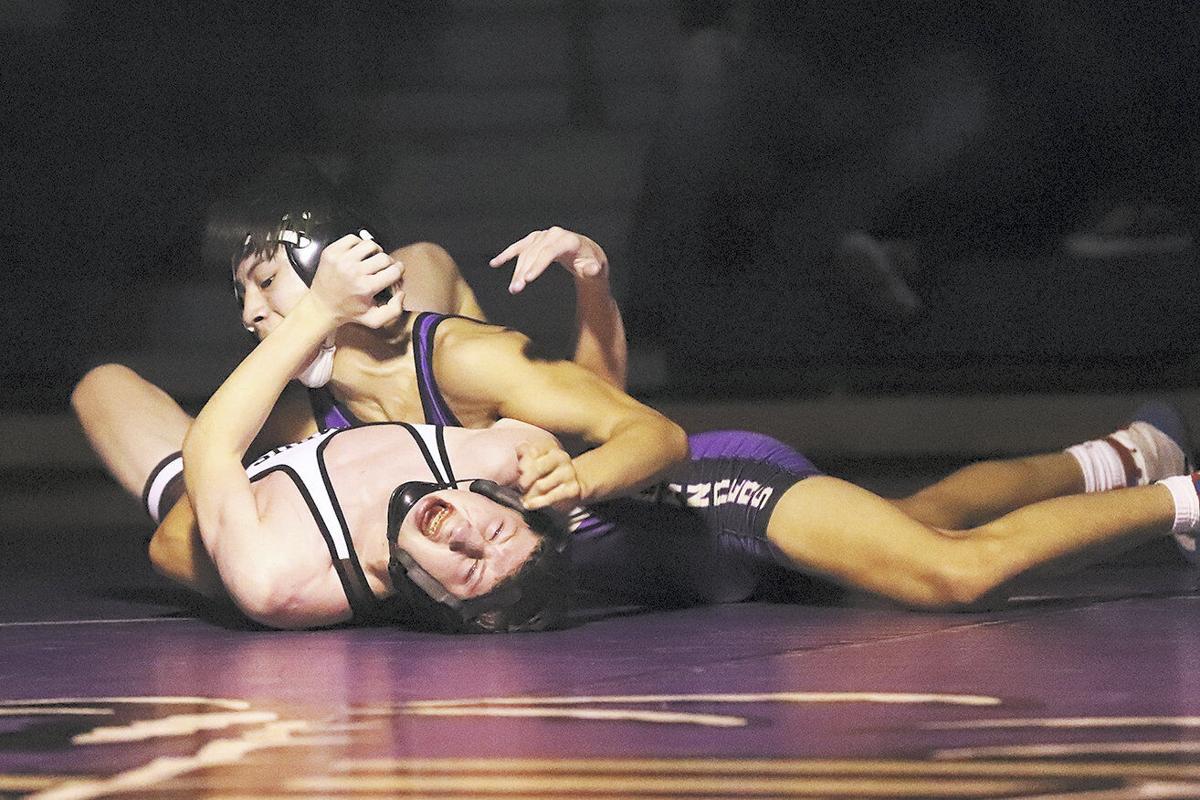 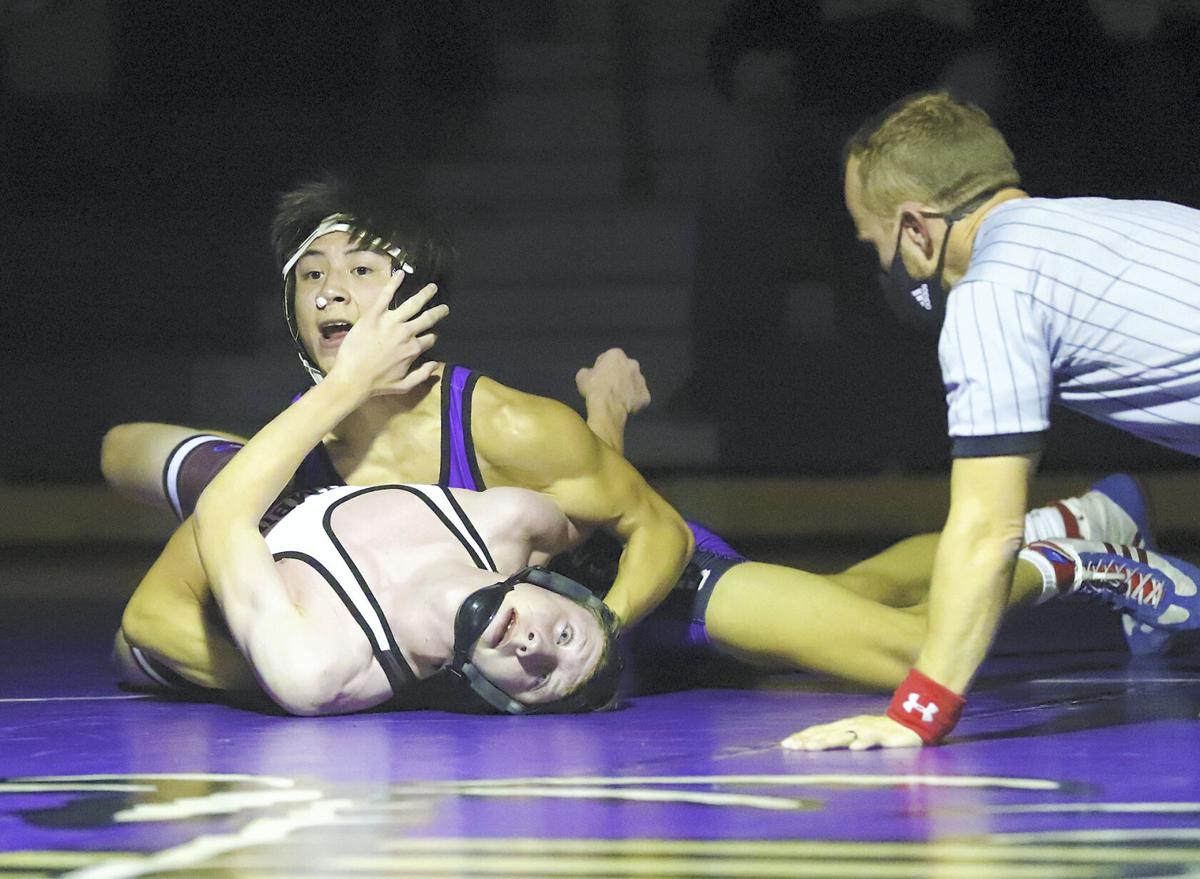 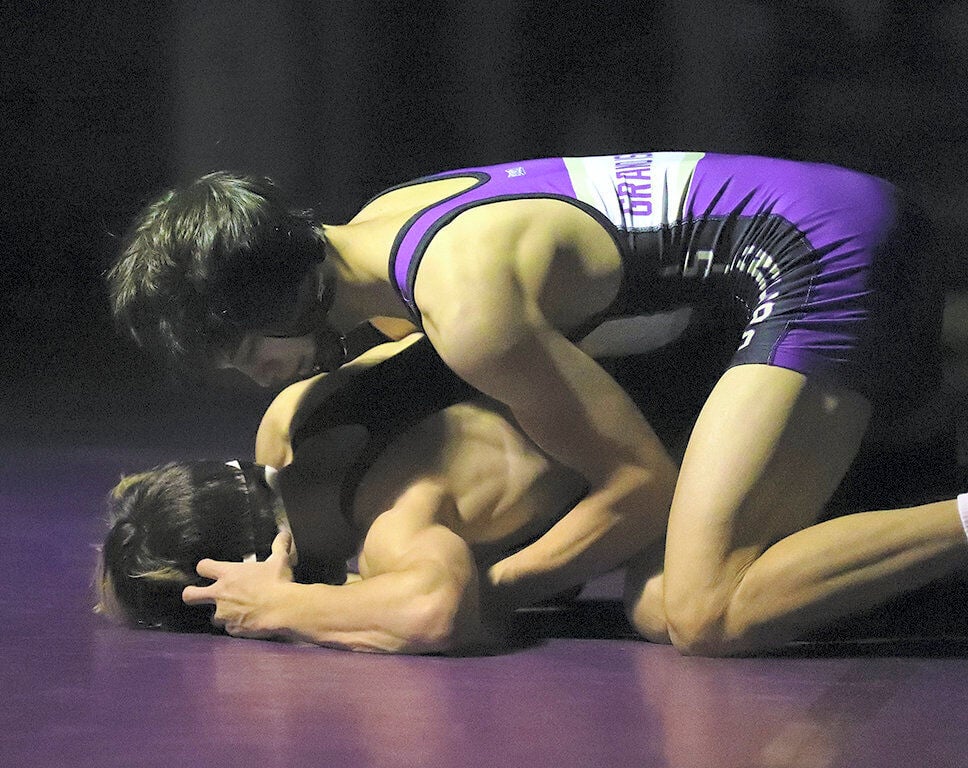 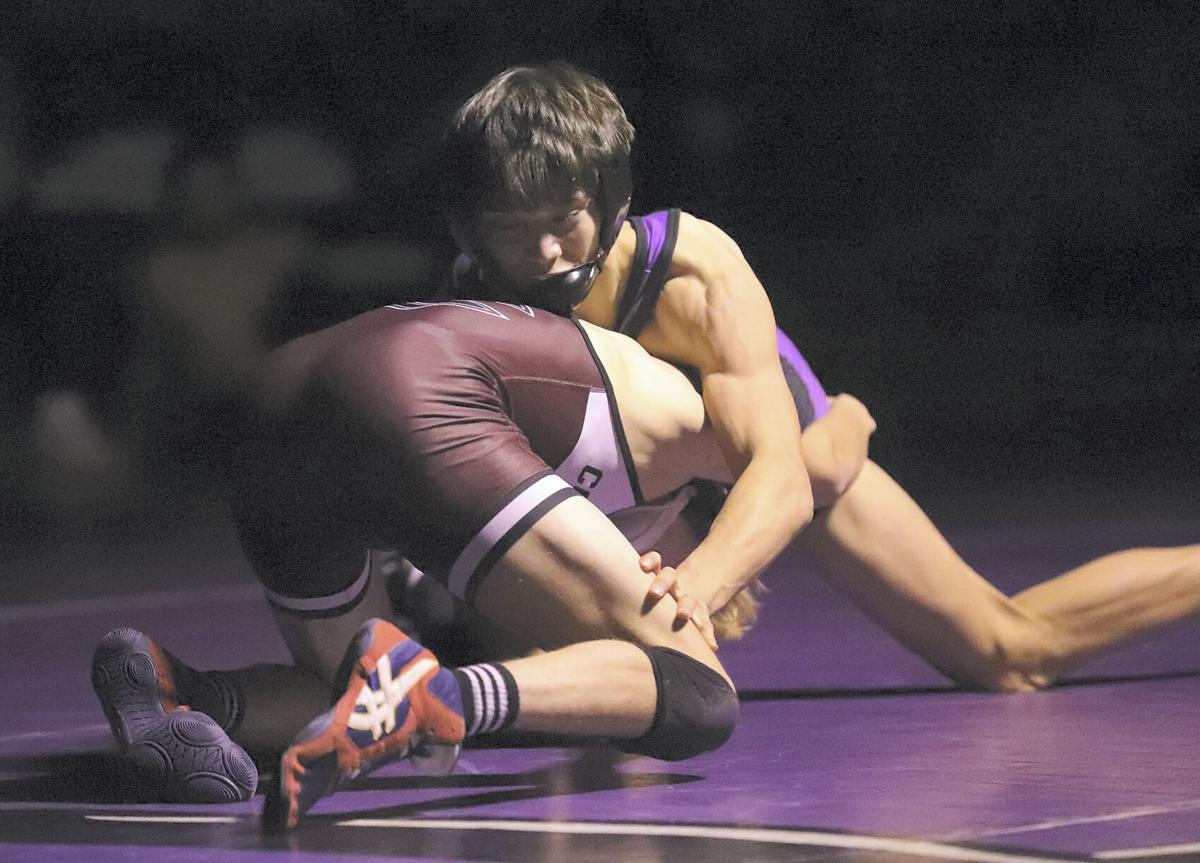 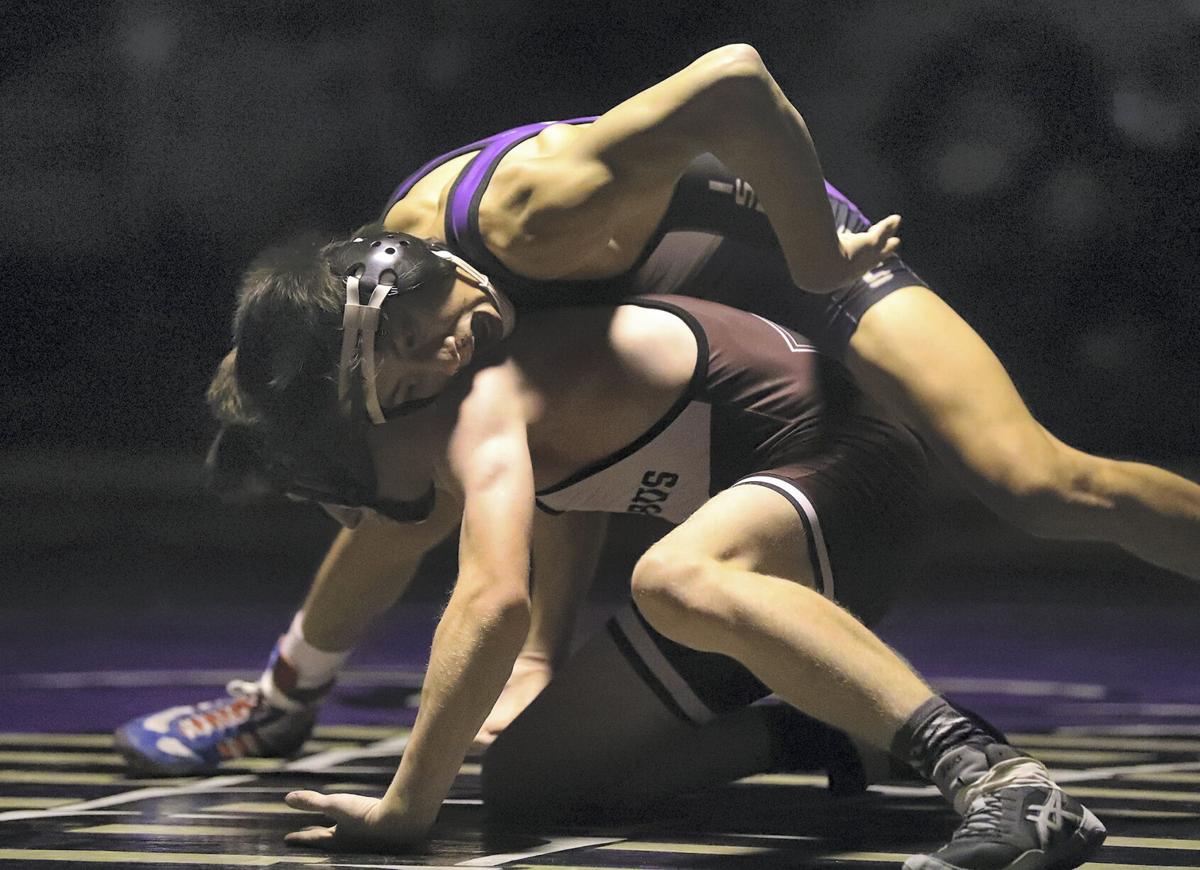 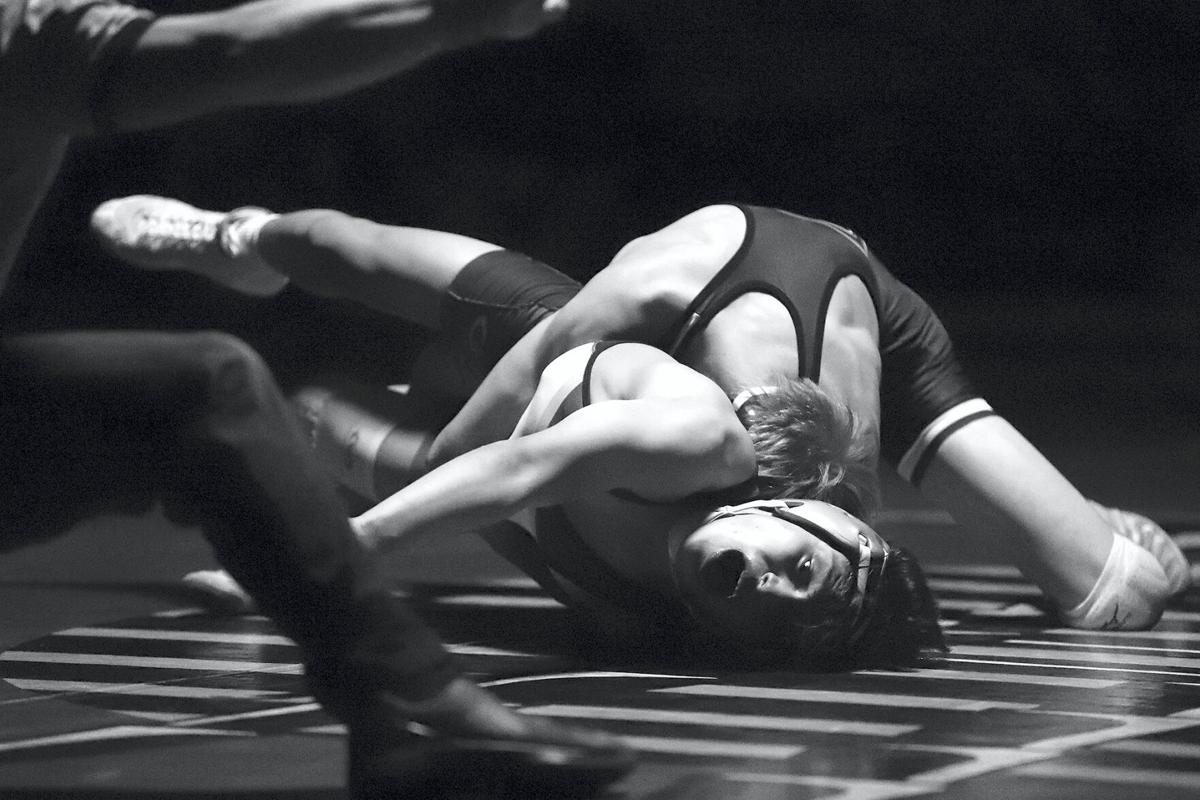 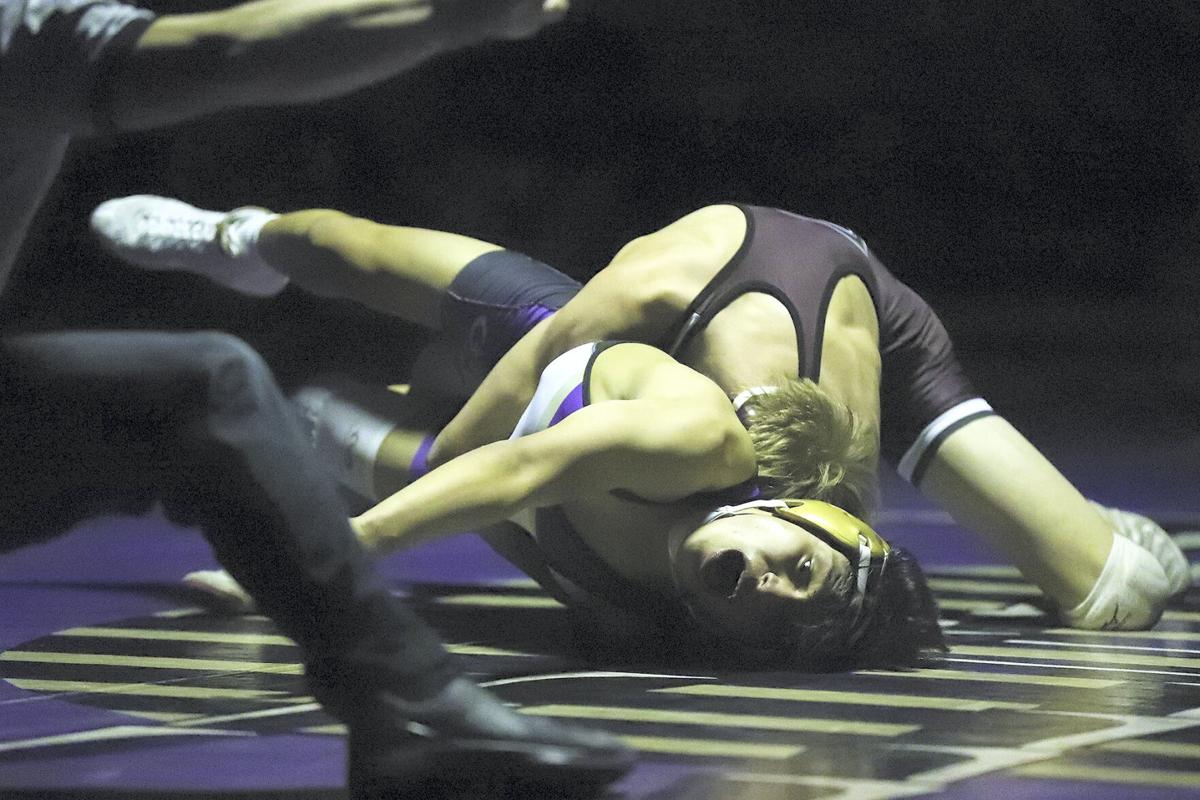 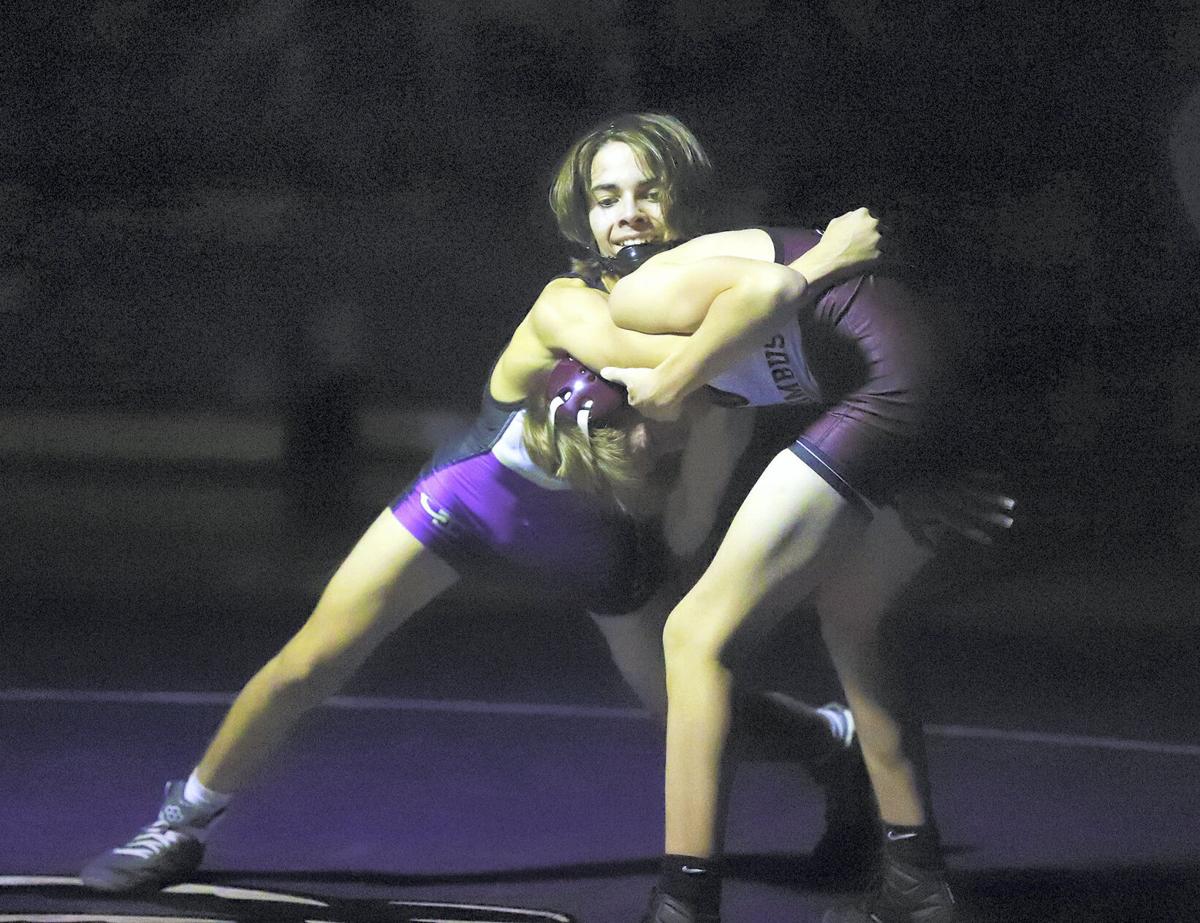 Grand Island Senior High wrestler Madden Kontos beat Kaden Brownlow of Columbus  in the 113-pound weight class during the Islanders’ season opener. Grand Island will host the annual Flatwater Fracas on Saturday although with an altered format and at different sites due to the pandemic. 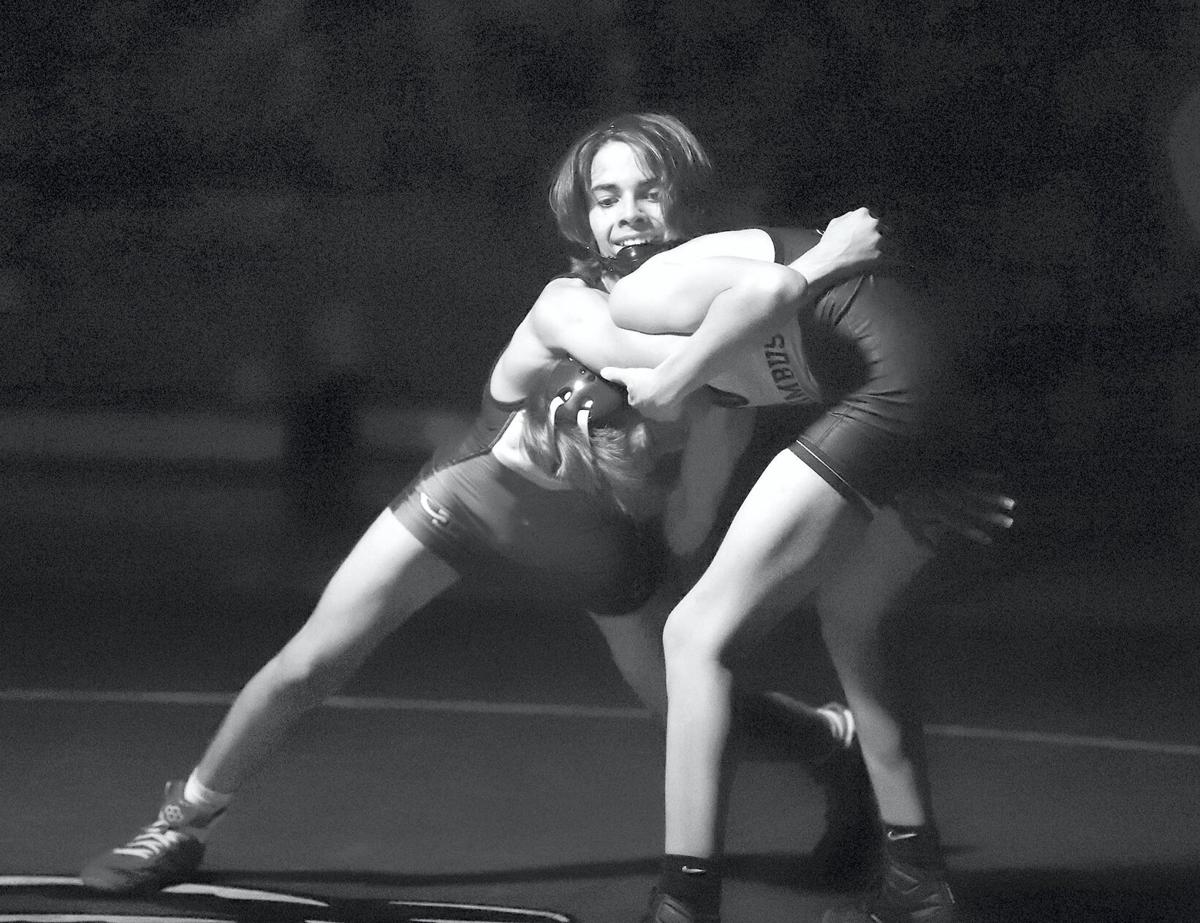 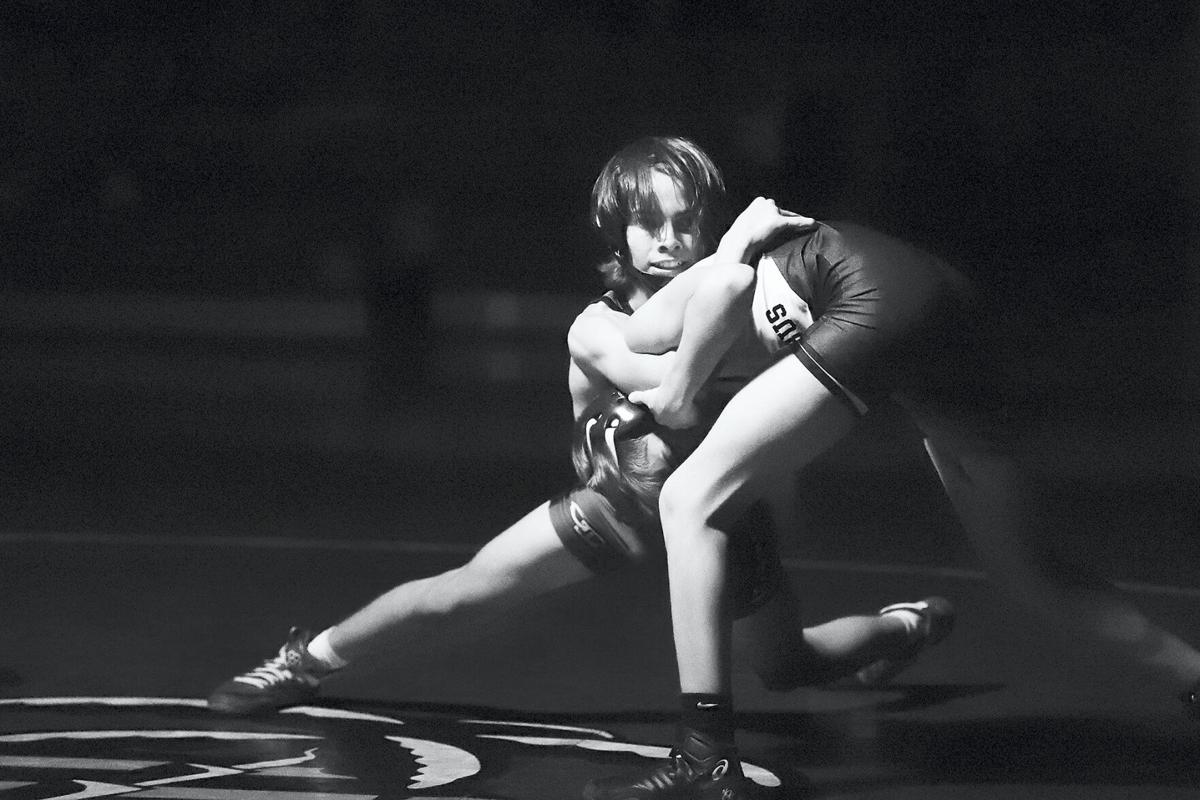 Columbus dominated the upper weights in the early going.

But Class A No. 2 Grand Island (Huskermat.com) returned the favor in the lighter weights to gain control.

After seeing the No. 7 Discoverers record pins from 160-195 pounds to take a 24-0 lead, the Islanders won six of the final seven matches to take a 43-33 win on opening night Thursday at Senior High.

Grand Island used a major decision, a forfeit victory and three pins in the final five matches to get the victory.

“There was a lot of great wrestling tonight,” GI coach Joey Morrison said. “We got off to a rough start but the kids hung in there and got the job done. I love this dual because Columbus is well trained and has some tough kids. It was a great win for our guys.”

It didn’t start well for the Islanders as Izaiah Deras (160) and Kolby Lukasiewicz (170) had leads in the second period but were turned to their backs and got pinned. In fact, Lukasiewicz had a 12-0 lead on Levi Bloomquist before getting reversed and put on his back.

“We had two matches where we were winning and we made some poor decisions and that came back to bite us,” Morrison said. “You just have to perform and we didn’t make good decisions in those matches.”

Columbus coach Adams Keiswetter said he wasn’t surprised with how Bloomquist just hung in there despite being down big.

“If there is a second left on the clock, I’m very confident that he’s going to do something to get the win,” he said. “I can never count that kid out of a match, no matter what the score is.”

Antony Navarro put Grand Island on the board as he recorded a 1:25 pin over Justin Gaston at 220. Navarro got put on his back for a second but rolled through and put Gaston on his to get the pin.

“Antony did a great job for us as that was his first time on varsity,” Morrison said. “He made a mistake in going to his back but he didn’t panic and rolled through and got the pin for us. That was nice to see.”

The two teams each got six points in the next two matches as Michael Isele got a forfeit victory at 285 for the Islanders, while Columbus’ Brenyn Delano pinned Coben Colson at 106.

Madden Kontos recorded a 2-0 win over Kaden Brownlow for Grand Island at 113. That win impressed Morrison.

“Madden wrestled one of our better matches tonight. He won the scramble and got a takedown for us,” Morrison said.

Both coaches were impressed with their winners in those matches.

Keiswetter said on Cerny’s win: “That was a revenge win for Blake because Juan beat him at the state tournament last year so that was nice to see him wrestle the way he did.”

Morrison said on Cushing’s win: “That was a matchup of two state finalists for the first match of the year and you really can’t ask for anything better than that. Blake really wrestled well in that match.”

Keiswetter said he was impressed with how the Discoverers wrestled.

“It was a lot closer than I thought it was going to be,” he said. “We got off to a great start with a lot of guys wrestling their first varsity actions and they got some big wins off the bat. That was cool to see.”

Morrison said he liked getting the win but knows there is room for improvement for the rest of the season.

The Islanders will be at the Kearney Invite Saturday.

From small-town Nebraska to Tokyo, Maggie Malone has chance at American history at Olympics

Only 10 years ago, Maggie Malone had never competed in javelin. Now, she has a chance at calling herself the best in the world.

The last time Aurora had a player compete in the Nebraska Coaches Association all-star volleyball match was in 2016.

College football teams were interested in Dane Pokorny. But rodeo is steering him another direction

Though Pokorny chose rodeo over football, the two have gone hand-in-hand for the 6-foot-3 running back, who is about to enter his senior season.

It took a longer time than expected, but the Central City/Fullerton seniors earned their way into another Class B state tournament late on Tuesday.

Maybe 50 years from now, the talk at some social gathering in Ord will turn to stories about that first football championship team from way ba…

This is Olson’s third appearance in reined cow horse at the national finals, and he qualified for the final short round in both his previous finals.

Being part of a sports team can form unique bonds that can’t quite be duplicated elsewhere.

HASTINGS — A strong start led Home Federal to victory on the first day of the Hastings/Kearney tournament.

Daylon Keolavone had quite the athletic year for Grand Island Senior High.

Grand Island Senior High wrestler Madden Kontos beat Kaden Brownlow of Columbus  in the 113-pound weight class during the Islanders’ season opener. Grand Island will host the annual Flatwater Fracas on Saturday although with an altered format and at different sites due to the pandemic.