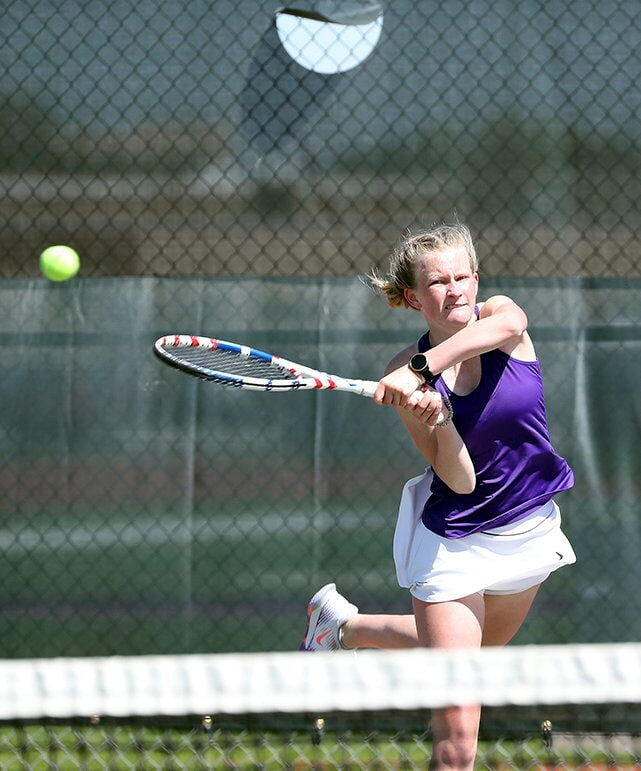 Macy McDonald of Grand Island senior high returns the ball on a back hand during Thursday's round one of the GISH invite. (Independent/Josh Salmon) 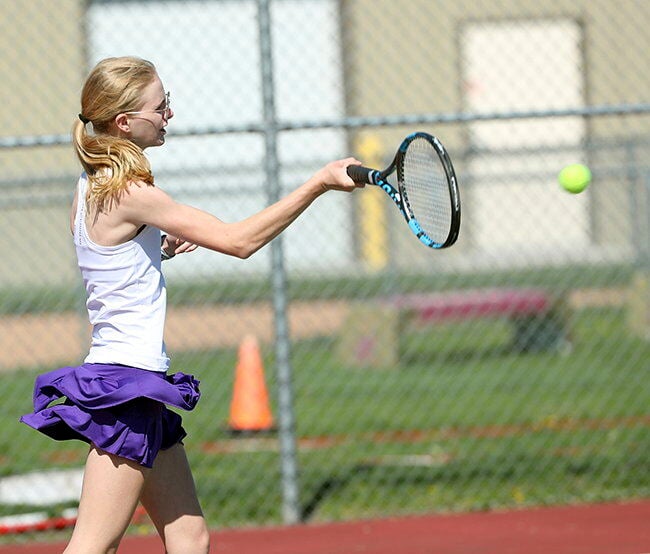 Annika Staab of GISH returns the ball to her Lincoln East opponent Thursday morning during the tennis invite. (Independent/Josh Salmon)

He said he felt the Islanders were going against three of the top teams in the state — Lincoln Southeast, Lincoln East and Lincoln Southwest.

Despite seeing the Islanders finished fifth with 11 points, Budler said he was very encouraged with their effort during the home meet.

“I thought we competed very well and basically did about as well as I thought we could,” Budler said. “I knew it was going to be tough today with three of the top teams in the state with Southeast, Southwest and East here. But we did some great things today.”

That included all of the Islander teams winning at least one match, so Budler said that was encouraging to see.

“That was important, especially since we were playing at our home meet,” he said.

Southeast won the meet with 25 points, while Lincoln East was second with 21 points.

Macy McDonald led the Islanders with second-place finish at No. 1 singles. She and two other players finished 3-2 on the day but was declared second based on the highest winning percentage on games won and lost.

“The No. 1 singles competition was just tremendous so her to finish second is big for her,” Budler said. “She could have easily gone 1-4 on the day but to get second is going to help her down the road, especially for state seeding and for her confidence. Her performance was so good and her level was very high.”

The No. 2 doubles team of Katie Wemhoff and Claire Kelly started 0-3 but won their final two matches to finish fourth. Both wins were close as they defeated Westside’s Lina Jouvenat and Bailey Hoig 9-8 and North Platte’s Tori Laubenstein and Raegan Douglas 9-7.

“I don’t think they played as well as they could have to start the day, even though they probably played three of the better teams in the state,” Budler said. “We had a feeling the final two matches were going to be winnable matches and they took care of business, especially since they were tight matches.”

The No. 1 doubles team of Emma Tennant and Kate Wilson, along with No. 2 singles player Annika Staab, went 1-4 to finish fifth. But Budler said he liked what he saw in their efforts.

“Emma and Kate basically did what I asked of them to do and that was their best, especially Kate because she was basically playing in her first varsity match and was thrown in against some of the best tennis players in the state. I thought she held her own,” Budler said. “Annika played well in every match she played in today. She had some up and down moments but her performance was still very good.”

Budler said the focus on the season has been improving every day. He feels they are doing that.

“That’s definitely 100% true,” he said. “The girls’ attitudes have been great all year. We are getting better every day and playing against this type of competition is only going to help us improve. I think we’re closing the gap day by day and match by match against the studs we are going against. Hopefully we can continue to do that.”

The Islanders will compete at the Lincoln East Invite Monday.

In a meet that featured a lot of the state’s best in many of the events, the Grand Island Senior High girls triple jumpers shined.

In the biggest game in the program’s brief three-year history, Central City/Fullerton/Centura received a big-time performance on the mound.

Class B No. 5-rated Northwest avenged two of its three losses in one fell swoop Tuesday.

Henry Kosmicki had never made a hole-in-one in his life.

Macy McDonald of Grand Island senior high returns the ball on a back hand during Thursday's round one of the GISH invite. (Independent/Josh Salmon)

Annika Staab of GISH returns the ball to her Lincoln East opponent Thursday morning during the tennis invite. (Independent/Josh Salmon)