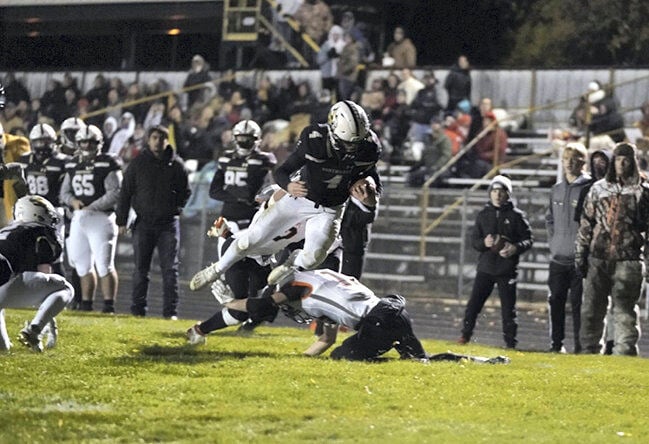 Northwest v Hastings 2020 @ Viking Field Hartman over a Tiger defender just short of the goal line. For The Independent by Ellis Collins 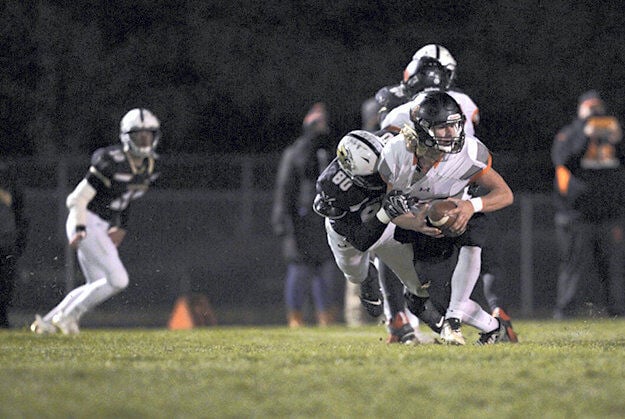 Northwest v Hastings 2020 @ Viking Field Isele with one of a few sacks on the night lat in the 2nd quarter against the Hastings Tigers. For the Independent by Ellis Collins.

The Class B No. 8-rated Northwest football team wrapped up its regular season at home Friday by losing to No. 5 Hastings 30-19.

Northwest received the ball to begin the game and turned it over right away when quarterback Sam Hartman got picked by Beau Dreher. That was just the first of five turnovers in the game for Northwest, with three coming in the first half.

“I was disappointed that we didn’t turn the three first half turnovers into any points,” he said.

Hastings did turn an interception into a touchdown on 38-yard strike from quarterback Jarrett Synek to Braden Kalvelage.

Northwest answered back two possessions later on a five yard TD run from Hartman. Northwest made the extra point to tie it 7-7 which is where it stood at halftime.

Hartman had 20 carries for 82 yards total.

The Vikings had seven penalties in the first half and Stein said they just hurt themselves on offense.

“First half we were OK but left points out there,” he said.

Stein credited his defense for a great first half.

“They really kept us in the game,” he said.

The Tigers were led in the half by Zaide Weidner who went 94 yards on 12 carries. Quarterback Synek was held to just 16 yards of offense in the half.

Hastings had a chance to jump ahead on its first possession of the second quarter but was stopped on the 1-yard line by the Northwest defense.

Northwest marched its way down field on its first possession of the second half and garnished three first downs before finally scoring on a 4-yard run from Brady Baasch to take the lead. The Vikings did however miss the extra point to make it 13-7.

It didn’t take Hastings long to answer back. In fact, it took just one play. Sitting on the 20-yard line,

Carson Shoemaker took a pass from Synek 80-yards for the score. The Tigers’ extra point was good to regain the lead 14-13.

Shoemaker said that single play changed the momentum of the game for his team.

“Absolutely it did. They just pounded us down the field and pushed us around,” he said. “We felt like we had that play and Jarrett put it right in the window and Carson made a great move out and around. We are kind of a big-play team so when we can get a big chuck play like that, it is important.”

Stein said the Vikings missed tackles and were just beaten on that play.

“I was baffled that we couldn’t get finger on him,” he said.

Hastings kicked a field goal towards the end of the third quarter to lead 17-13.

Northwest fumbled the ball early in the fourth quarter and Hastings turned it into a score on the next possession.

Synek ran it in from 28 yards out. The extra point was missed and Hastings led 23-13. They weren’t done.

Synek again found the end zone weaving through traffic from 28- yards out.

He had 75 yards on 11 carries and two TDs in the second half.

“That last touchdown, that is just our power read with the quarterback,” he said. “I was 100% sure he wasn’t going to read anything, and that he was going to keep the ball. It was the right read.”

Synek took a beating as he was sacked five times by Northwest but Charlie Shoemaker said he’s a trooper.

“He took some shots tonight and got up and kept going,” the coach said. “He is a great leader out there.”

It won’t get any easier next week for both Northwest and Hastings as both teams are awaiting to see the Class B seedings to begin the state playoffs.

Stein said his one hurt but the Vikings are trying to keep their chin up.

“If there is a silver lining we all get to go to the playoffs and we have a chance,” he said.

Spirited Islanders look to turn the corner in 2020-21 season

Northwest v Hastings 2020 @ Viking Field Hartman over a Tiger defender just short of the goal line. For The Independent by Ellis Collins

Northwest v Hastings 2020 @ Viking Field Isele with one of a few sacks on the night lat in the 2nd quarter against the Hastings Tigers. For the Independent by Ellis Collins.