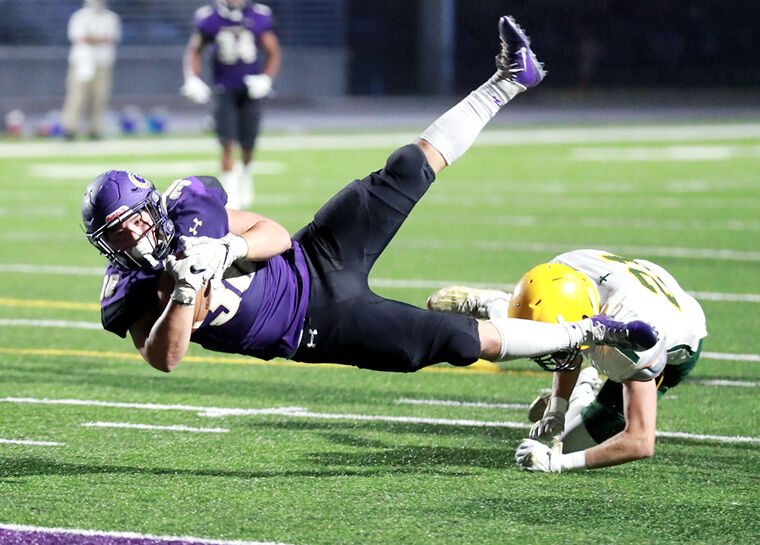 Grand Island Senior High's Daylon Keolavone is brought down near the goal line by a defender during the Islanders 24-7 win over the Lincoln Pius X Thunderbolts. (Independent/Carissa Soukup) 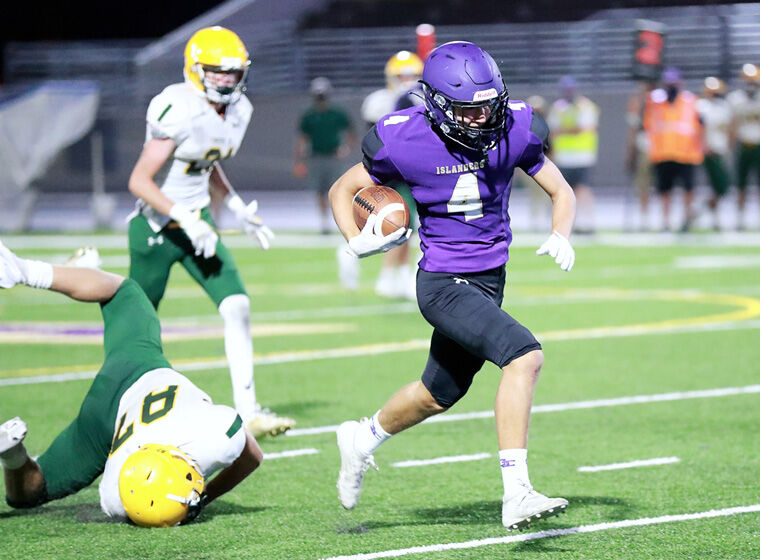 Some big plays in the passing game and a stout defensive effort allowed Class A No. 7-rated Grand Island Senior High to overcome some first-game mistakes and top Lincoln Pius X 24-7 Friday at revamped Memorial Stadium.

Jaden Jurgensmier made his first start at quarterback and finished 15-for-35 for 300 yards with two touchdowns and one interception.

“It went pretty good for a first game,” Jurgensmier said. “We have a lot of inexperienced guys skill position wise. They played good with good effort. Execution was pretty good, so all in all, it wasn’t bad.”

Jurgensmier’s touchdown strikes opened and closed the scoring, with both going to junior receivers. Brandon Fox scored on a 25-yard play with 1:03 remaining in the first quarter to give the Islanders the lead for good.

“It felt good. It took a lot of pressure off,” Jurgensmier said. “I was a little nervous coming into the game with my first start, so it felt good to get the first one.”

A 60-yard touchdown to Marcus Holling sealed the game with 6:35 to go. That came 47 seconds after Lincoln Pius X cut the lead to 17-7 on a 12-yard pass from Lolesa Sawtelle to Ben Mitchell.

“Our receivers are able to beat any DB in the state,” Jurgensmier said. “I have a lot of faith in them. I can throw to them, they’ve got good hands and we can make big plays off of it.”

Grand Island coach Jeff Tomlin said things went about how was to be expected in a season opener — even one delayed by a week when the Islanders had to quarantine due to COVID-19 cases among the coaching staff as preseason practices were set to begin.

“It’s kind of a typical opener — too many penalties and there’s a lot of things that we need to clean up, but the effort was outstanding,” he said. “I thought our kids really played hard.”

The Islanders did have nine penalties for 102 yards, but a stingy defense kept the Thunderbolts off the scoreboard until late.

Pius had as many first downs as punts (8) and threw three interceptions.

“Our defense played well enough for us to win the game tonight — big plays, big stands,” Thunderbolts coach Ryan Kearney said. “We just couldn’t get anything going on offense. That’s a credit to Grand Island. They’re tough, they’re coached well, they executed really well and our lack of execution was really their executing on defense what they wanted.”

Grand Island outgained Pius 248 yards to 36 in the first half. The Thunderbolts had a chance to score in the second quarter when they had a first-and-goal at the 5-yard line, but a 22-yard field goal try sailed wide left.

“I thought we showed some mettle with our backs up against the wall holding them out of the end zone and then they missed the field goal then with a couple of picks when they were driving on us,” Tomlin said. “I thought our defense did some pretty good things.

“There’s still some kinks we need to work out. Losing (senior linebacker) Jackson Sikes (to a shoulder injury) was big because he really, really does a nice job at that position. Hopefully it’ll be something that we can get him back in a week or two.”

While Grand Island’s offense was hit-or-miss at times, some of the hits resulted in big gains, especially in the passing game.

“We did get it in chunks,” Tomlin said. “We will take it however we can get them. Obviously we’re going to have to be able to run the ball more consistently, and the kids know that. I’m sure they’re disappointed in that.

“But I was impressed for the most part with the time Jaden had to throw. I thought our pass protection was good.”

As always after a first game, Tomlin saw plenty of areas to improve upon.

“We’ll build off this one,” he said. “I think most of the time you improve the most between weeks one and two. I hope that’s true for us. We have a short week. We play (Lincoln) Southeast on Thursday, so we’re going to have to quickly get the film graded and figure out how we can improve.”

The varsity football debut of the renovated Memorial Stadium had a different feel with limited fans spread out on the home side of the stands and the visiting east side of the stadium empty due to Grand Island Public School’s policy of not allowing visiting fans at home events during this fall sports season.

A few people in green shirts could be spotting scattered around the outside fence.

Kearney said he and his team focused on not being distracted by the environment.

“I pretty much zone in,” he said. “I didn’t notice any difference. I told the players it’s a different situation, but when we’re out on the field we’ve got to focus on what our job is. So I’m trying to do that same thing as the players are.”

St. Paul uses run game to down No. 2 Kearney Catholic

KEARNEY — St. Paul coach Rusty Fuller has been around enough football to know that defense and line play will keep you in plenty of games and …

Crusaders down Centennial in first game ever at GICC

It was far from a perfect performance for Class C-1 No. 4 Grand Island Central Catholic Tuesday night against Wood River.

Class B No. 7-rated Northwest continues to search for some consistency this season.

Heartland Lutheran had to deal with more changes to its lineup during its home triangular.

Grand Island Senior High's Daylon Keolavone is brought down near the goal line by a defender during the Islanders 24-7 win over the Lincoln Pius X Thunderbolts. (Independent/Carissa Soukup)