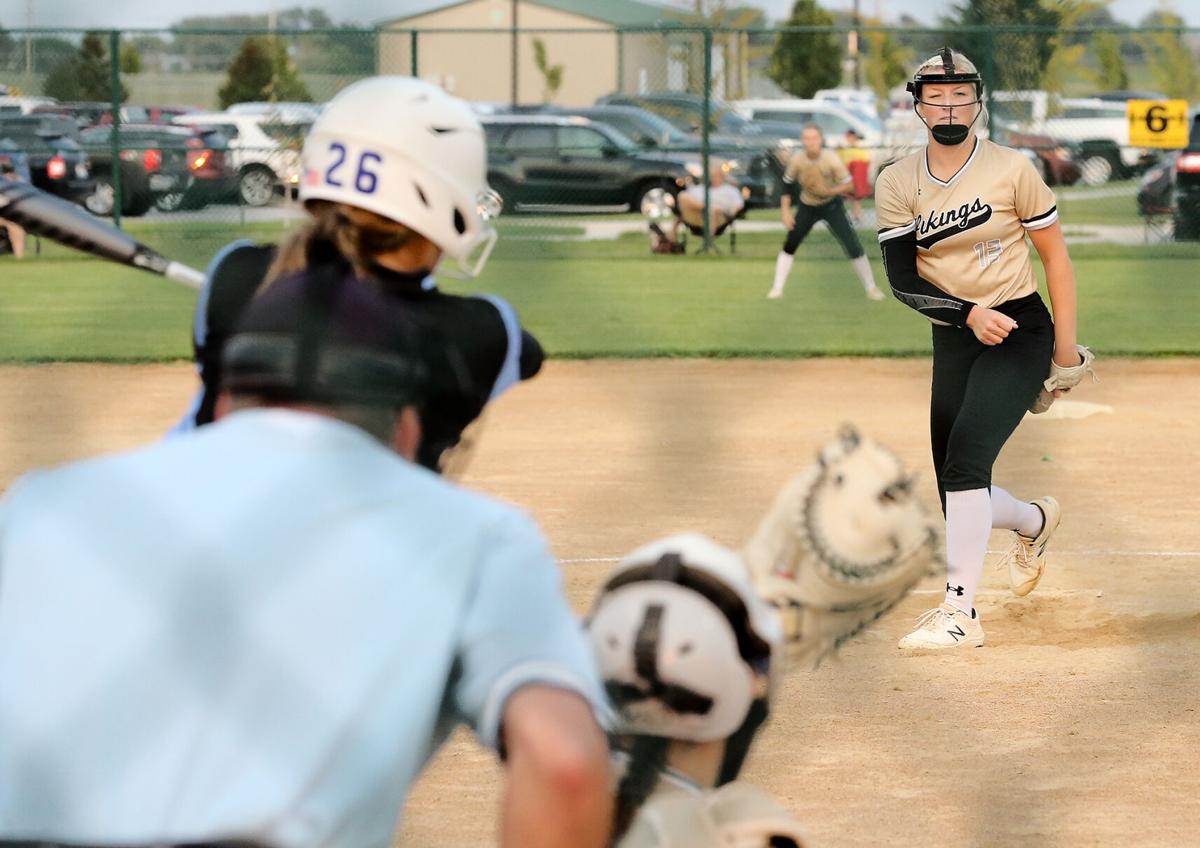 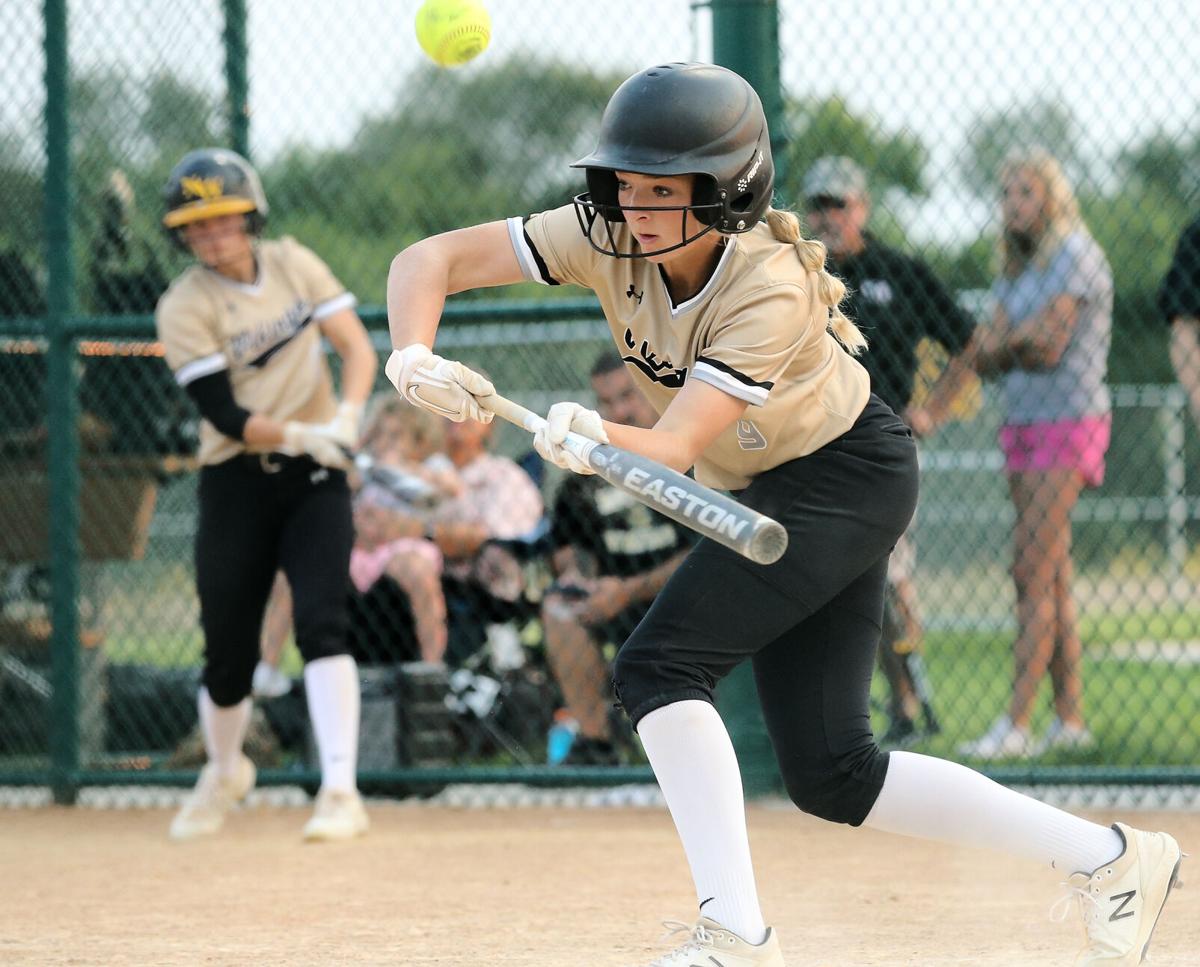 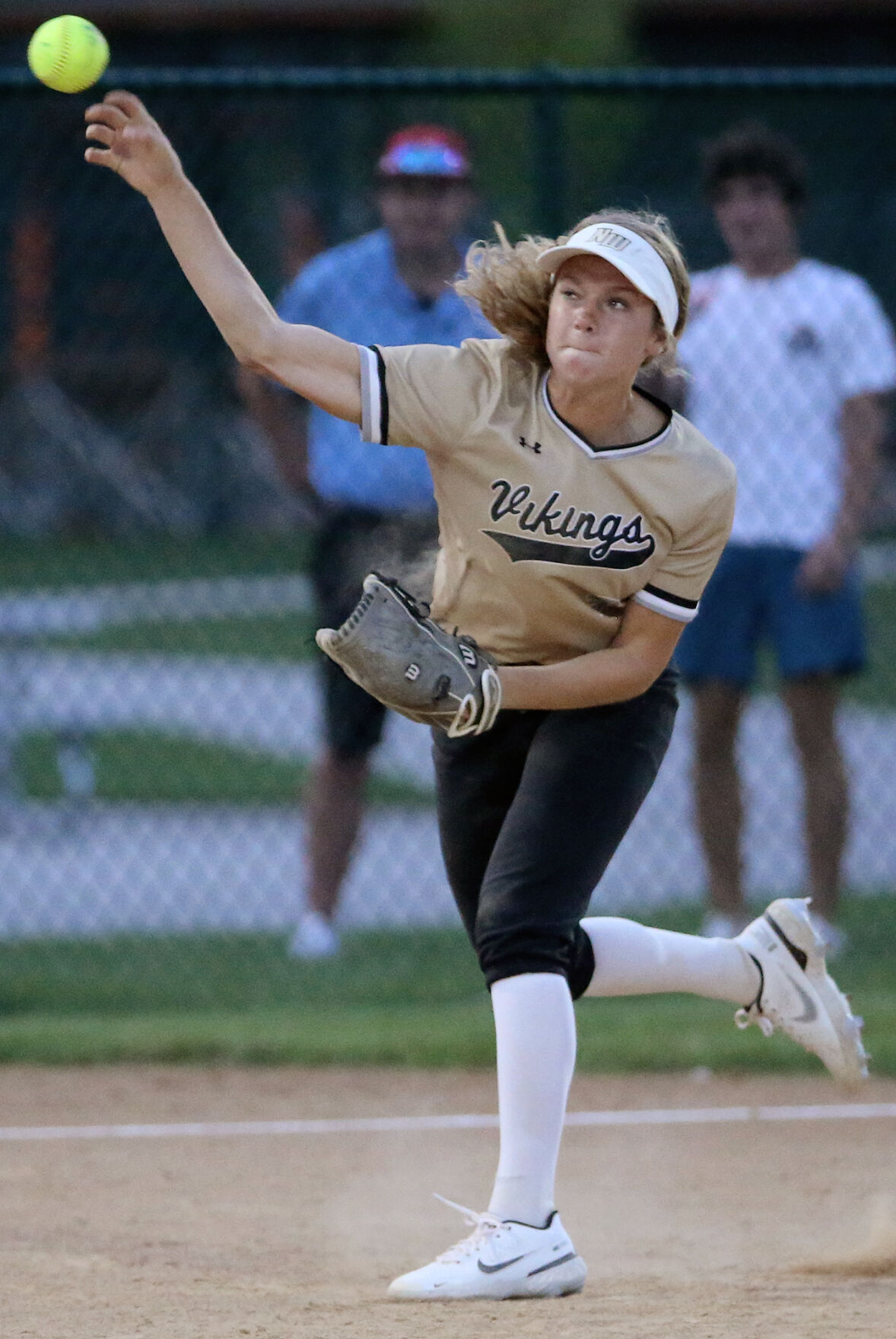 Northwest shortstop Reba Mader makes a throw from near third base to try and get a GICC runner out during Thursday night's game at Veteran's Park. The Vikings won 13-1 in five innings. (Independent/Josh Salmon) 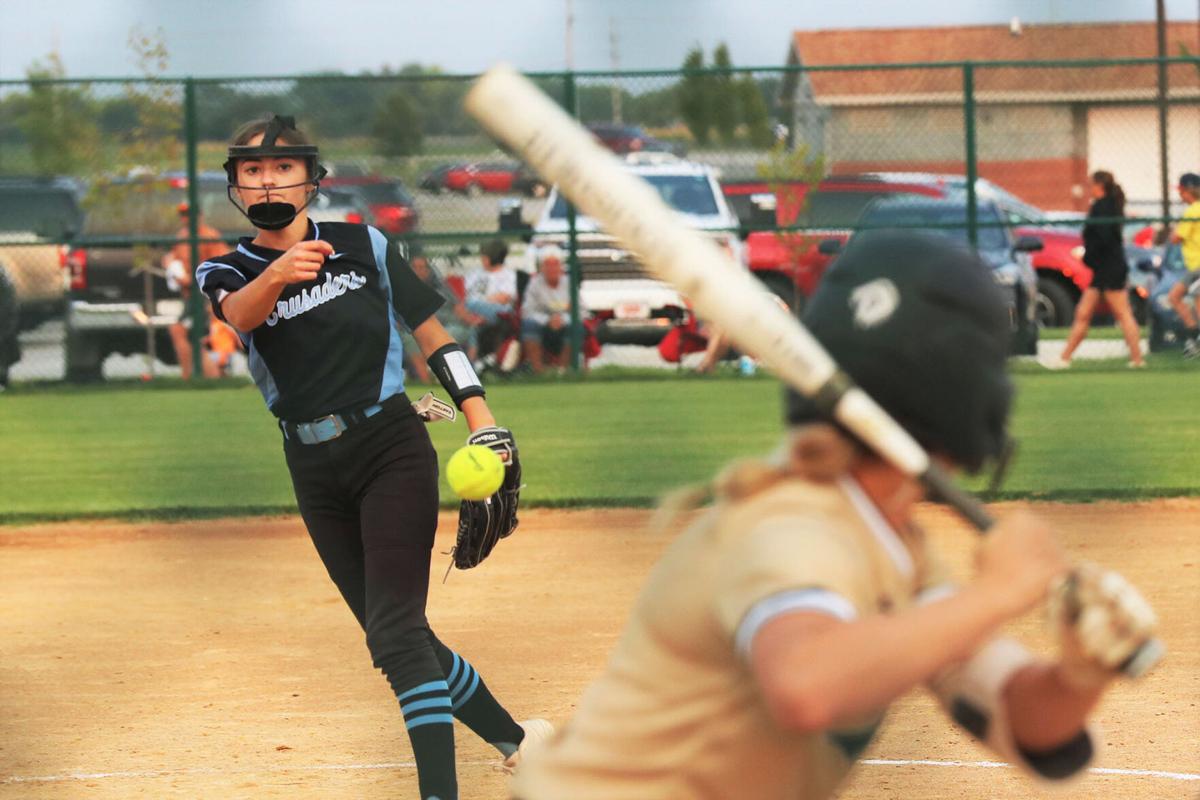 Grand Island Central Catholic's Mikah Culler throws a pitch to the batter in hopes for a strike. (Independent/McKenna Lamoree) 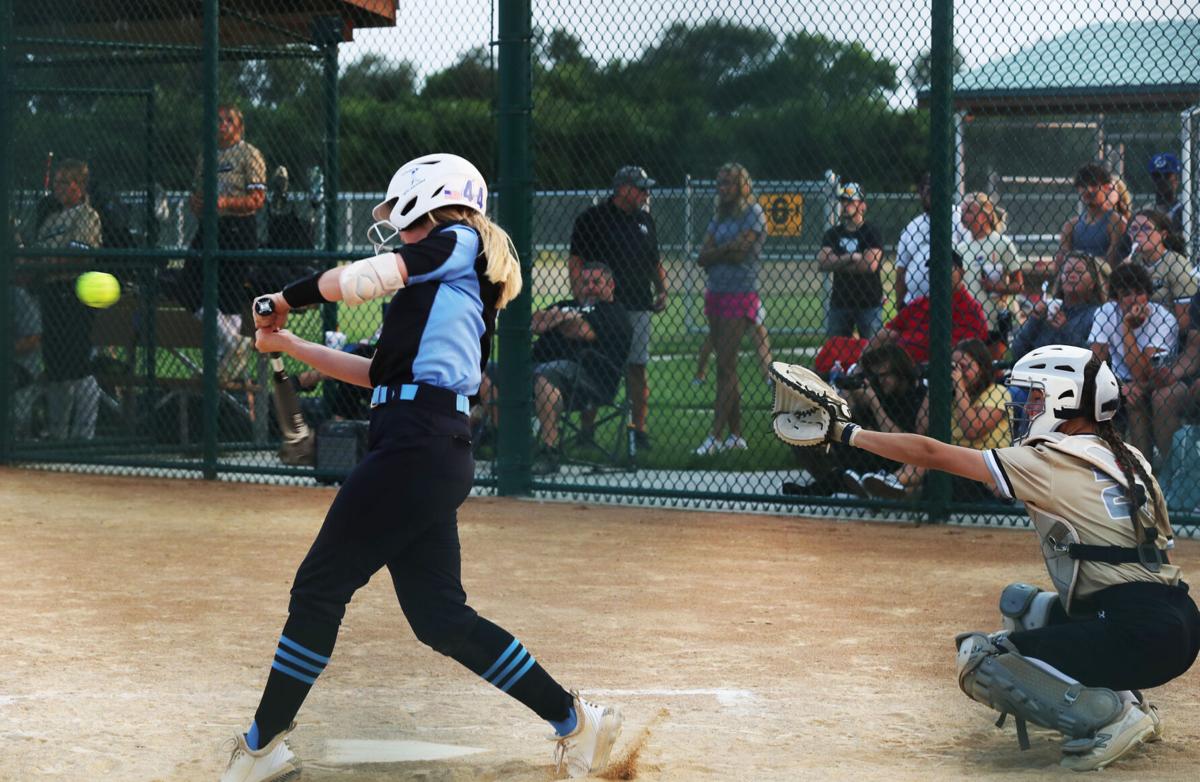 And that set the stage for an all-around strong outing by Class B No. 7-rated Northwest in its intra-city rivalry game against Grand Island Central Catholic

Laurent delivered a two-run, two-out single in the top of the first, then struck out the side in the bottom of the frame.

She went on to strike out the first nine batters she faced and the Vikings cruised to a 13-1 victory in five innings.

Last year, Northwest lost the regular-season meeting to the Crusaders before taking a pair of postseason matchups. The Vikings didn’t have a hiccup this time around.

“We made sure of that,” Northwest coach Mitch Sadd said. “We did a lot of hitting (Tuesday) just because we’ve seen a lot of speed pitchers lately, then we come back to this. That’s tough for these girls to adjust down to that.

“So we did a lot of hitting (Tuesday), adjusting speeds for them and doing different things. We hit the ball well and then we played defense just as well.”

No defense was necessary for the first three innings. Laurent’s nine strikeouts in a row came with 33 strikes on 37 pitches.

“Right now, she’s dominant,” Sadd said. “Her pitches, her spins, everything was working very well for her right now. We couldn’t ask anything more out of her.

“I just love where we’re at as a ball club right now and love what we’re doing.”

The junior said the support she receives leads to her success in the circle.

“The support that I have behind me is incredible – coaches, parents and most of all my teammates,” Laurent said. “They’ve done a lot for me, and having them behind me, I couldn’t be more grateful for them.”

She finished with one unearned run on two hits with 10 strikeouts and no walks over four innings.

“We didn’t do a good job being prepared for her. We thought we were prepared, but we didn’t look like we belonged out there tonight, especially the first time through the lineup. Then we started to get the bat on the ball. The energy level got better, and that was nice.”

Laurent helped her own cause in the top of the first. After GICC’s Mikah Culler walked the bases loaded with two outs – Brock Culler said he’s never seen her walk two batters in a row or hardly ever in an inning, let alone three – Laurent came through with a two-run single down the right field line.

“GICC is a big rival to us,” she said. “They’re in the same town as us, and they always come out to play. But we knew that we wanted it.

“Sometimes, we’re not the best at getting an early lead. Our bats are slow at the start, but then we can bring them. In this game, we got the momentum right off the bat.”

Sadd said Northwest (10-4) has been getting off to quicker starts while winning seven in a row.

“That’s been our last few games – we jump on them right away and then we manufacture what we need,” he said. “We’re hitting the ball well.

“Then they changed up pitchers on us and went faster, which helps us because we’ve been seeing this speed.”

The Vikings added two runs in both the second and fourth innings before exploding for seven runs in the fifth.

Central Catholic (9-8) had some success against Laurent in the fourth inning. Avery O’Boyle flew out to center field to end the strikeout streak.

Kylie Gangwish and Shaylin Kucera followed with back-to-back singles, and Gangwish scored on a passed ball.

Northwest won for the 10th time in 11 games.

“I love where we’re climbing,” Sadd said. “We just need to keep getting wins and then we’ll be right where we need to be at the end of the season.”

Laurent added: “We did have a rough start to the season losing twice to Norris and (once each to) Beatrice and Hastings. Coming together and working together, practicing together – that’s been the key.”

Central Catholic (9-8) has lost five of six, three of those against rated teams.

“This is what you want,” Brock Culler said. “For cryin’ out loud, if you want to be considered among the best programs in Class B, you have to play the best programs. So we’re not complaining about our schedule by any means.

“We just got to be better. We have a young group, and they’re trying. It stinks. It’s hard to stay mentally and physically on top of it when you don’t see a lot of success. But these kids are doing a great job of handling that.”

Here are the top hitters, pitchers and fielders who stood out on area diamonds throughout the past fall season.

Northwest shortstop Reba Mader makes a throw from near third base to try and get a GICC runner out during Thursday night's game at Veteran's Park. The Vikings won 13-1 in five innings. (Independent/Josh Salmon)

Grand Island Central Catholic's Mikah Culler throws a pitch to the batter in hopes for a strike. (Independent/McKenna Lamoree)