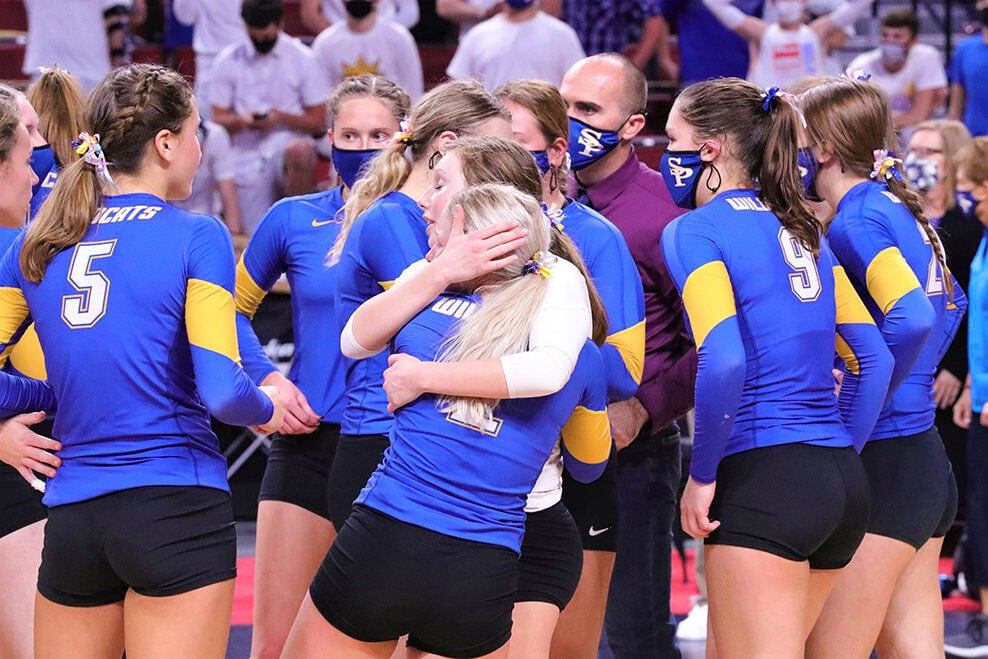 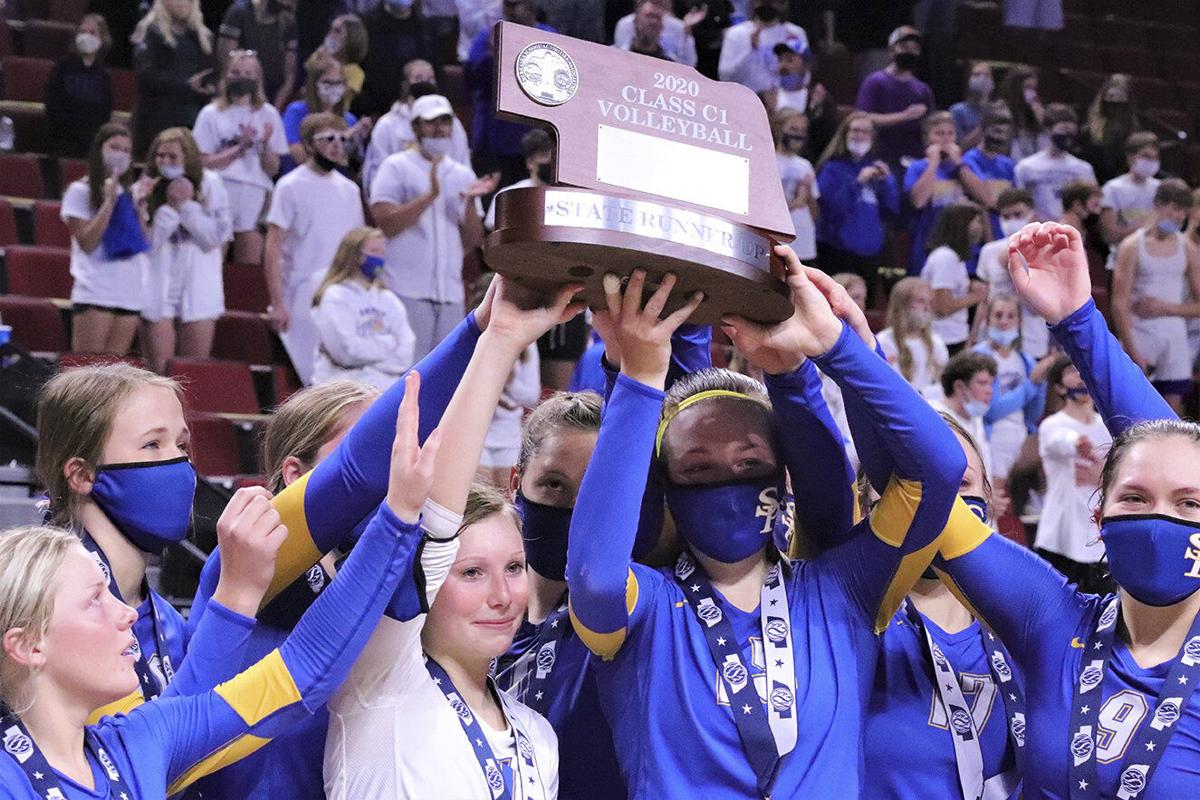 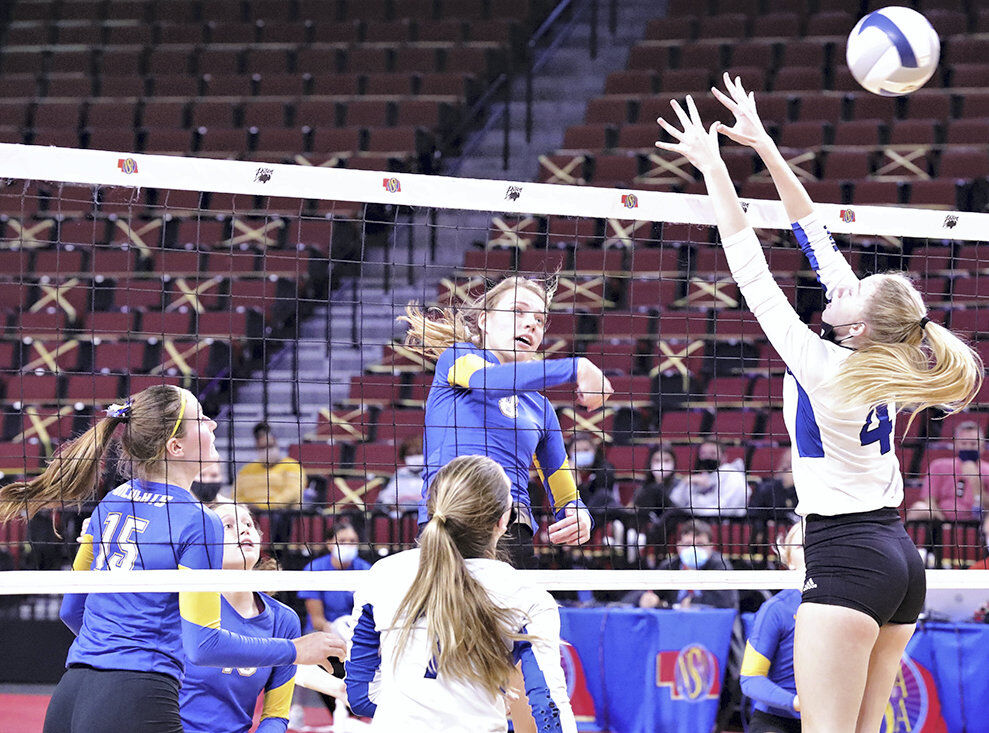 St. Paul's Abby Elstermeier goes for the kill against Josie Sutton of Wahoo during Saturday's Class C-1 championship game at the Pinnacle Bank Arena. St. Paul finished as runner up. 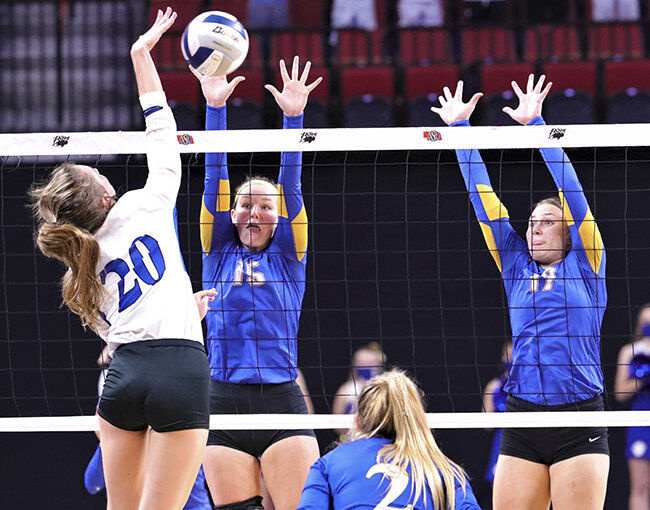 Olivia Poppert (15) and Teegan Hansel of St. Paul go for a block against Kelsie Sears of Wahoo during the Class C-1 championship game Saturday afternoon.. St. Paul finished as runner up. 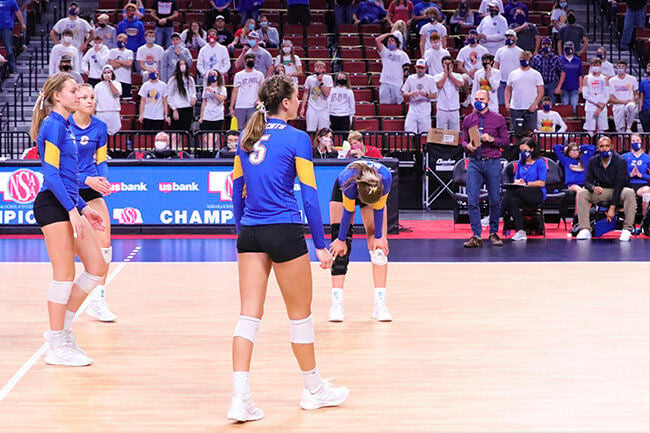 Olivia Poppert bows her head as St. Paul falls in set five of the Class C-1 championship game at the Pinnacle Bank Arena. St. Paul finished as runner up.

LINCOLN — It took a superstar performance from Mya Larson for Wahoo to claim a state championship Saturday at Pinnacle Bank Arena.

But it was a team effort that helped too.

It was the second-straight season the Wildcats finished as the Class C-1 state runner-up.

In a match that featured two teams that were 34-0 going into the state title match, Wahoo — which won its third C-1 title in four years — was down 2-1 in the match and trailed 11-7 in the fifth set before going on a 8-1 run to finish the match. Larson, who was one off of tying the C-1 state record in kills, had three during the run, including at match point.

Wahoo coach Trish Larson, Mya’s mother, said while her daughter’s effort was very key, it took a team effort to defeat the Wildcats. Kelsie Sears, who had 16 kills, had three kills in the late stages of the second set to turn a 24-22 deficit into a set win and evened the match at 1-all, then served a 6-0 run during the 8-1 run in the final moments of the match. USC recruit Elle Glock connected on 62 assists, just five shy of tying the C-1 record.

“That was hard,” Trish Larson said. “I’ve never experienced something like that. We had different players step up for us, whether it was hitting, serving or defense. It was very gutsy but these girls are competitors and will give it all they can.”

St. Paul coach Matt Koehn-Fairbanks said Wahoo just made the plays when they had to and Mya Larson was too tough to stop.

“We tried a couple of ways to stop her but we just couldn’t do it,” Koehn-Fairbanks said. “She is just an amazing player. And they have a bunch of other players that do a good job for them. We gave them a good run there but it just wasn’t enough.”

The first two sets saw both teams go on late runs. St. Paul broke a 21-all tie in the first with a 4-1 run, then Sears’ heroics in the second set helped Wahoo tie the match up.

St. Paul gained the upper hand in the third as Paige Lukasiewicz served a 5-0 run with three ace serves for a 12-4 lead.

Then the Wildcats rallied from a 10-5 deficit to take a 15-14 lead in the fourth. But Larson connected on four kills during an 11-3 run to help Wahoo force a fifth.

Josie Jakubowski, who led the Wildcats with 20 kills, had three early, while Abby Elstermeier added two and a block to help St. Paul gain the 11-7 lead in the fifth. But Sears had a kill to start her 6-0 run behind the service line to give the Warriors the victory.

Jenna Jakubowski and Teegan Hansel each added 10 kills, while Elstermeier chipped in eight. Olivia Poppert had 43 assists and Lukasiewicz and Josie Jakubowski each led the defense with 15 digs.

Coach Larson said St. Paul was a tough team to play against.

“They just don’t make errors. They serve tough and pass very well. They are just in system all the time and it was hard to get a kill against them. They are just great defenders,” she said. “They have a great setter who is a threat offensively and you have to keep an eye on her. And they have great hitters all around. They were just a great team all around.”

“The players had it in them to win today but just fell a little short and Wahoo had a lot to do with that,” Koehn-Fairbanks said. “Last year we were happy to get second and this year, we felt we could have had the gold but if a few breaks could have gone our way, we might have won it.”

But despite finishing second for the second consecutive season, Koehn-Fairbanks said St. Paul played with grit at the state tournament. The Wildcats were down 2-0 and 7-1 in the third set to rally and defeat Lincoln Lutheran in five sets in the semifinals Friday. He added he was proud of what they did during the season. The senior class went 130-11 during their careers, including 104-4 the past three years.

“I think the state tournament showed what my girls are made of,” Koehn-Fairbanks said. “They are not just physically tough but mentally tough. They could have easily just rolled over after trailing 7-1 in the third set but they didn’t. We fought today. We had our chances today but just couldn’t get it done.

“And it’s remarkable what the St. Paul volleyball team has accomplished because we don’t have the high-level Division I or II players on our team. We just have small-town farm girls who like to play volleyball and have fun together. I’ll miss the heart that this group showed, especially the seniors because they’ve done a lot for St. Paul over the years.”

Vikings hope for another top 10 finish

The Northwest wrestling team may have lost a talented senior class to graduation, but the goals remains the same.

St. Paul's Abby Elstermeier goes for the kill against Josie Sutton of Wahoo during Saturday's Class C-1 championship game at the Pinnacle Bank Arena. St. Paul finished as runner up.

Olivia Poppert (15) and Teegan Hansel of St. Paul go for a block against Kelsie Sears of Wahoo during the Class C-1 championship game Saturday afternoon.. St. Paul finished as runner up.

Olivia Poppert bows her head as St. Paul falls in set five of the Class C-1 championship game at the Pinnacle Bank Arena. St. Paul finished as runner up.