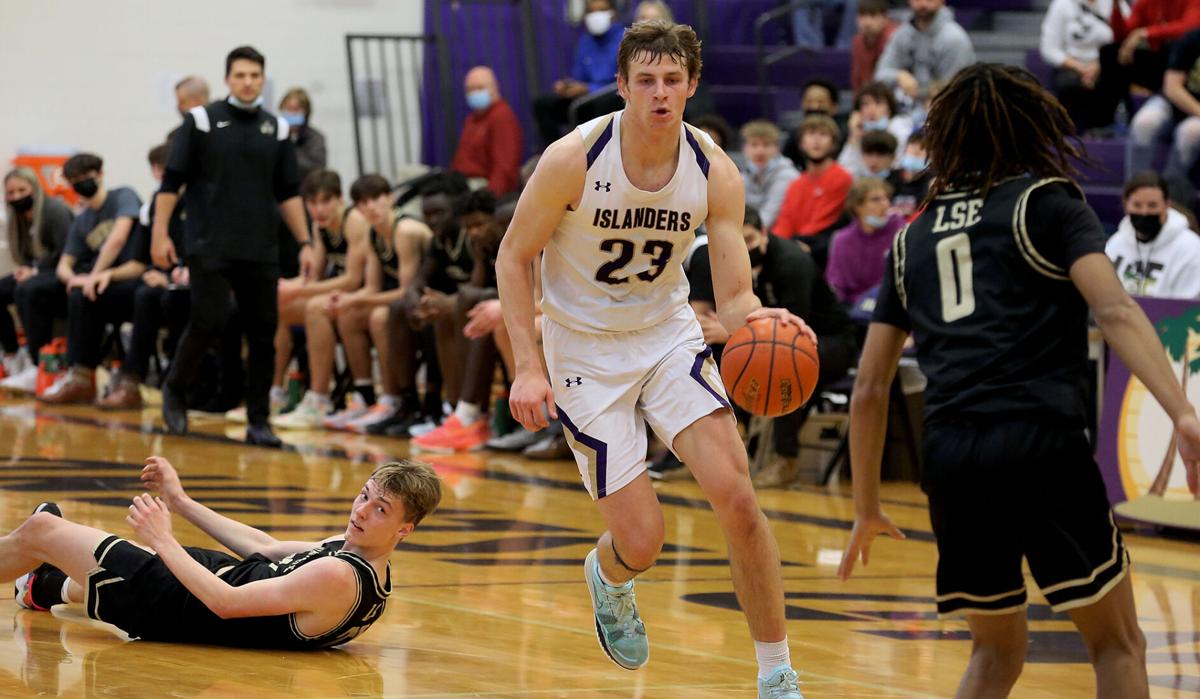 Lincoln Southeast's Wade Voss looks at Grand Island Senior High's Isaac Traudt after he failed to steal the ball away from Traudt early in the second half Friday night's game at GISH. (Independent/Josh Salmon) 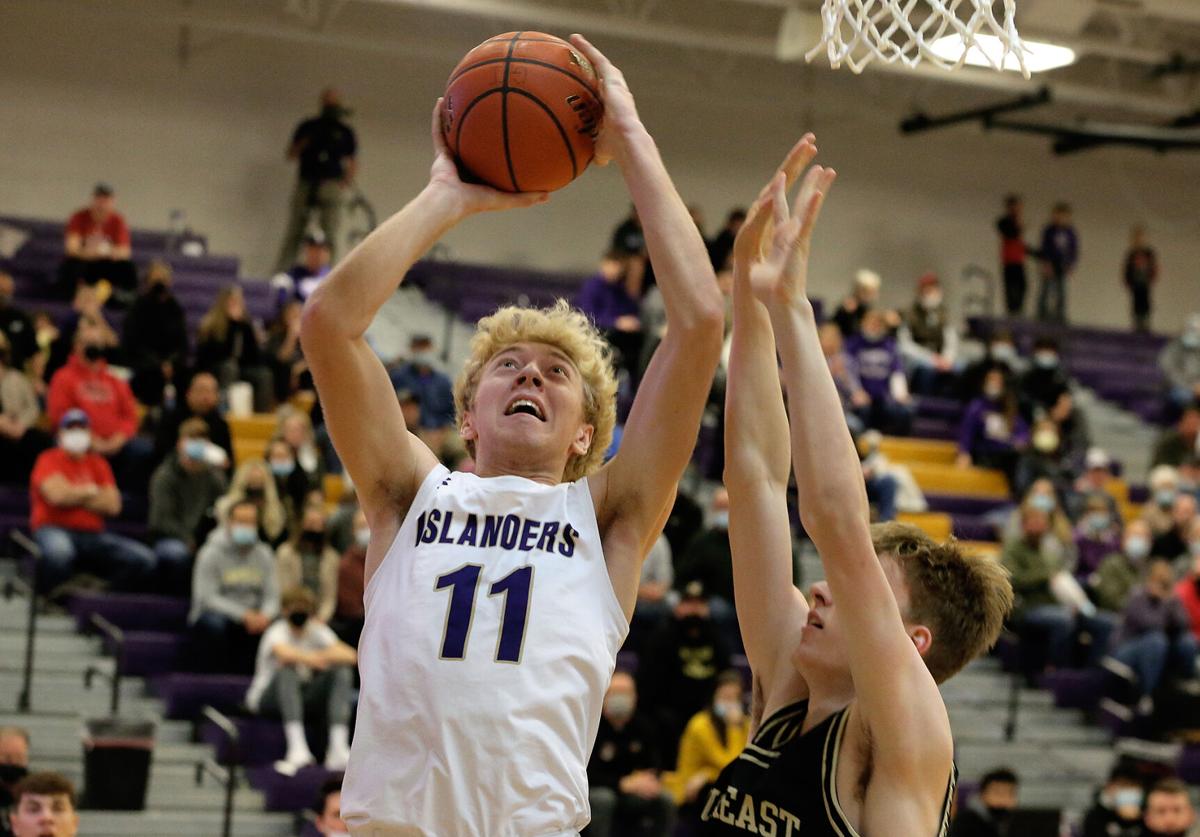 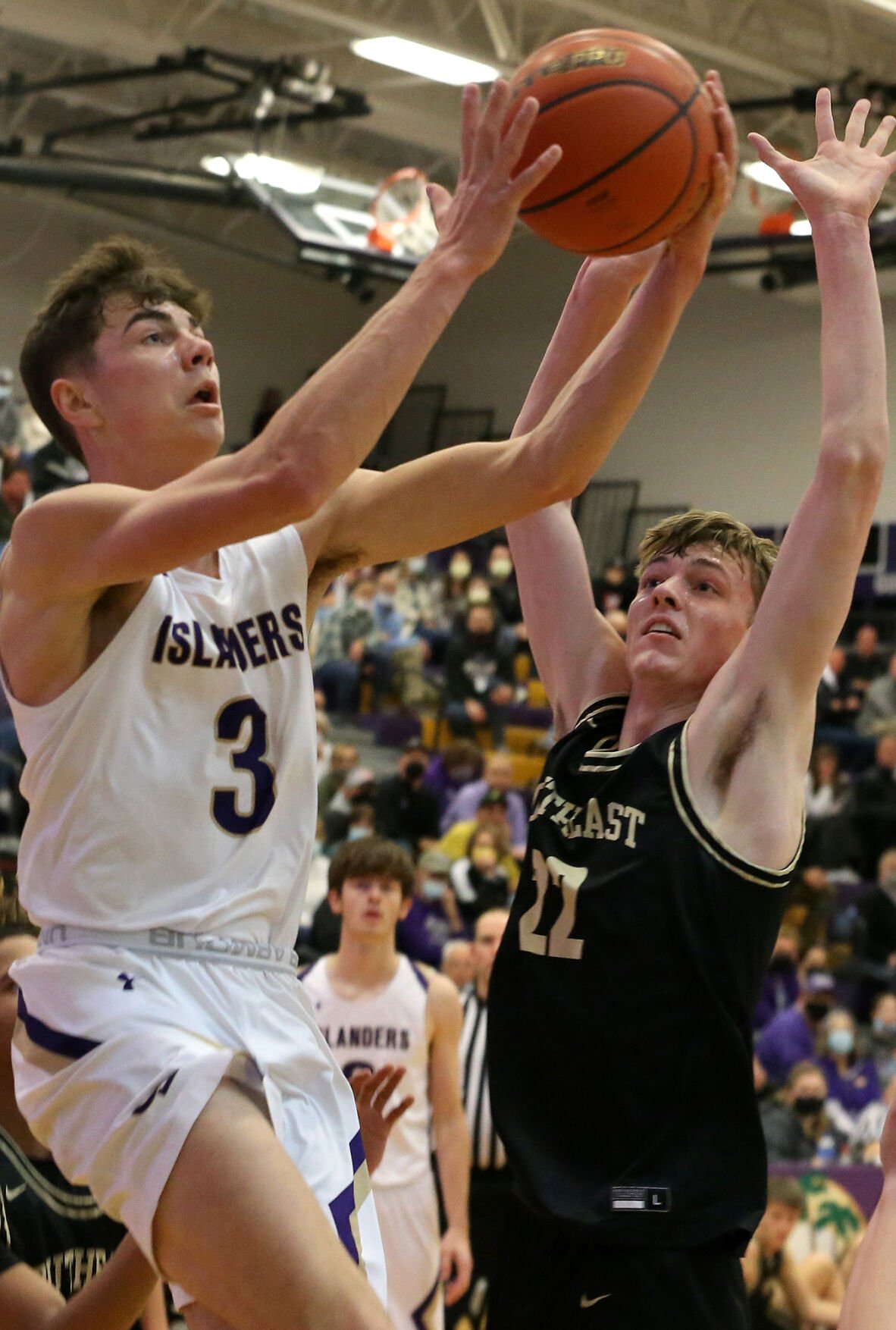 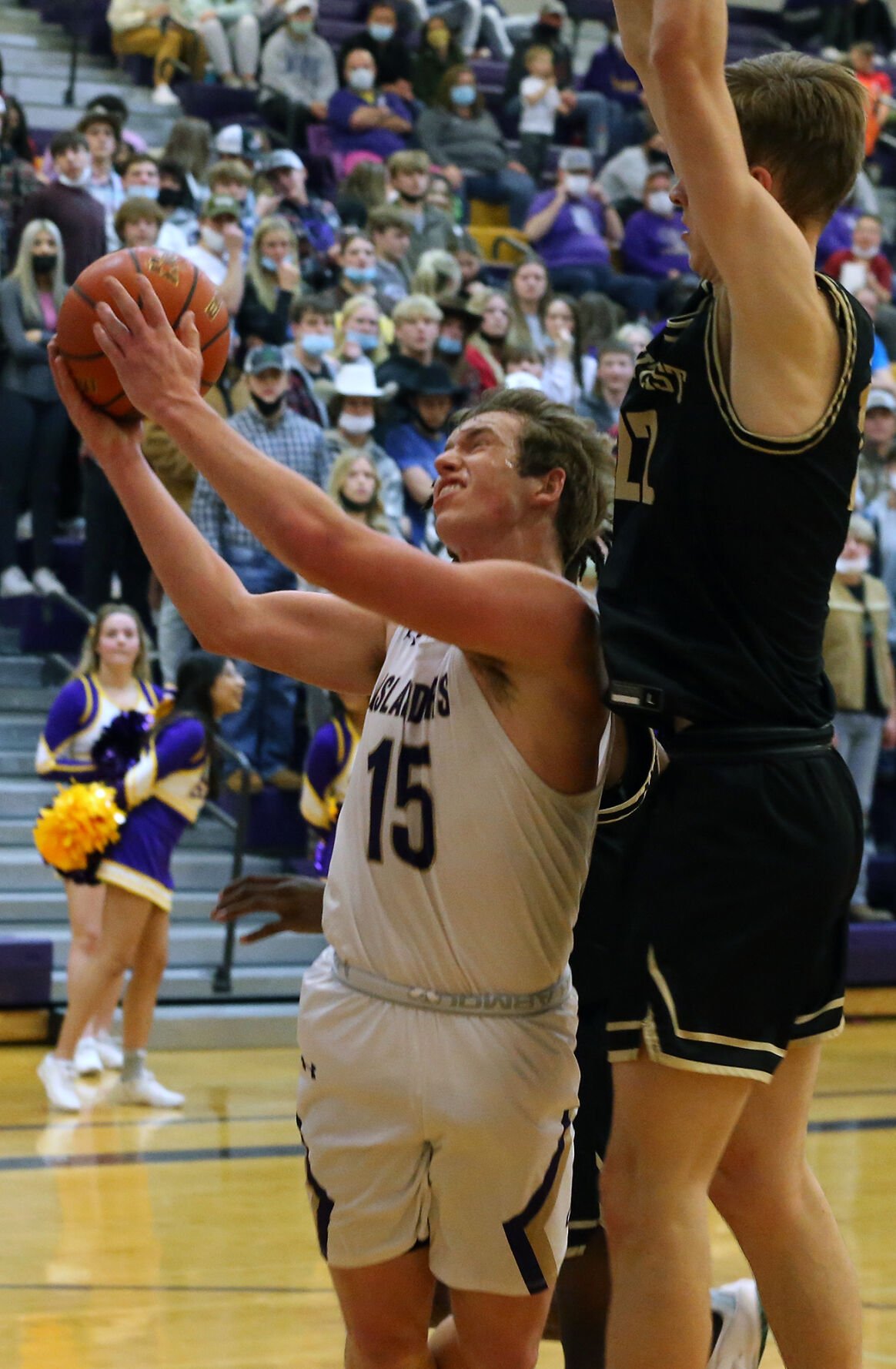 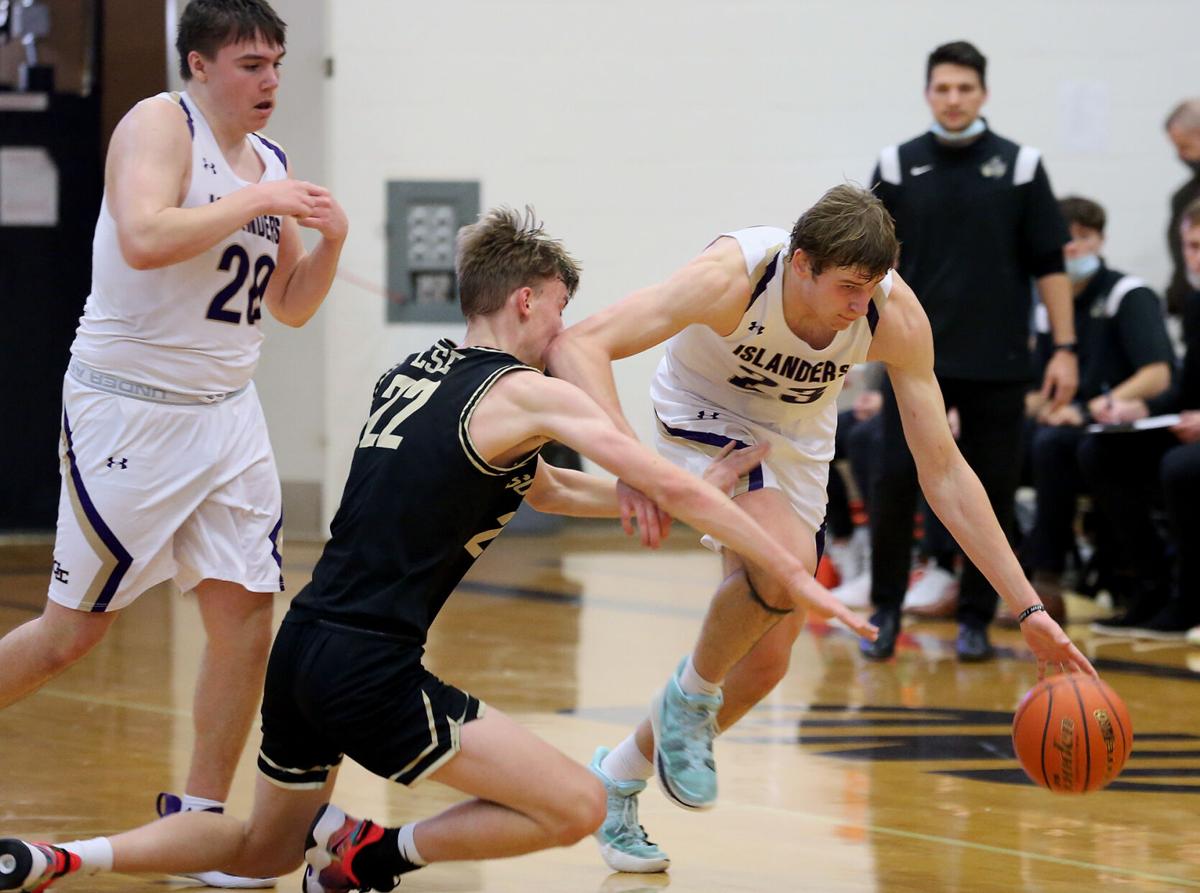 The spark Grand Island Senior High has been searching for all season might have ignited on Friday night.

The new-look Islanders got a game-high 22 points and 10 rebounds from Isaac Traudt and St. Paul transfer Andy Poss made his season debut with 13 points as Grand Island posted a 60-53 home-court victory over Lincoln Southeast.

“Sometimes you just need a spark,” Grand Island coach Jeremiah Slough said. “We’ve been in a situation where we’ve been struggling a little bit, but we had a light at the end of the tunnel — and our light just happened to be Andy. He came in tonight and just did what we wanted him to do.”

Poss scored seven of his 13 points in the third quarter, including a 3-pointer and a fastbreak basket that started a 13-0 run that gave Grand Island a 37-24 lead with two minutes to play in the third. Poss, a 6-foot-2 senior guard who had to sit out the Islanders’ first nine games of the season due to NSAA transfer rules, was 4 of 4 at the free-throw line in the fourth quarter as GISH hit 11 of 14 foul shots in the final eight minutes.

“Andy is a really solid player, offensively, and he’s a tremendous defensive player,” Slough said. “We were so much more dynamic, defensively, with him on the floor — we can do some things differently — and we really caused Southeast some problems for the first three quarters.”

“I pulled some film on him from St. Paul and I asked a couple of coaches about him and we knew he was a good athlete and a good player,” Werning said of Poss. “Watching some of the film, we knew he was going to be fearless and he’s a shot-maker.

“Poss really makes (Grand Island) a lot better. They’ve been in some close games and I think that if he had been playing, it might have pushed them over the edge in a couple of the losses that they had. GI was needing a little bit of scoring and he got it done for them.”

“We had a big-time reset and our practices were tremendously better this week throughout our entire program,” Slough said. “The JV played great and the varsity certainly played at a very high level. I credit it to a great week of practice.”

The Islanders took their largest lead at 44-29 on two Traudt free throws with 6:14 to play. But Southeast used full-court pressure to force four fourth-quarter turnovers and get back into the game, cutting Grand Island’s lead to 51-45 on a steal and layup with 2:43 remaining.

That was as close as the Knights could get. A Barrett Olson basket inside and two free throws by Kytan Fyfe stretched Grand Island’s advantage to 55-45 with 2:02 left and the Islanders maintained at least a seven-point lead the rest of the way.

“We put up a fight,” Werning said. “That’s one thing I love about our team is that there hasn’t been a game yet this season where we’ve given up. We’re probably the youngest team in the state and I’m proud of our guys.”

Slough expressed similar feelings about his squad. Despite a retooling of the starting lineup that now has seniors Jacob Nesvara and Tyler Fay coming off the bench, Slough said the Islanders’ team attitude has been impressive.

“Jacob and Tyler have displayed incredible unselfishness to come off the bench as seniors,” Slough said. “They just come in and play hard — no attitude, no ‘poor me.’ They’re putting the team first and come in and do exactly what we need them to.”

The added depth has Slough excited about Grand Island’s potential.

“Like we have talked about with our guys, in football if you start 2-7, you’re in big trouble,” Slough said. “In basketball, you just have to be playing your best at the end of the year and somebody has to beat you to end your season. There’s no such thing as not making the playoffs in this sport.

“I think this program has always done a good job of playing better down the stretch. I definitely know we have a much better team right now than we did in early December.”

The Grand Island Senior High Athletic Hall of Fame recognized the inductees of its 2022 class Friday night during halftime of the Islanders’ boys basketball game against Lincoln Southeast.

Emma Harb, Chloe Mader and Isabella Rivera made most of competing in the debut of the Northwest girls tournament.

The Hastings wrestling team were anxious to get going at the Northwest duals tournament Saturday.

Brayden Schropp scored a game-high 23 points to lead Class C-2 No. 9-rated Hastings St. Cecilia to a 49-46 road victory over Class B Northwest…

Lincoln Southeast's Wade Voss looks at Grand Island Senior High's Isaac Traudt after he failed to steal the ball away from Traudt early in the second half Friday night's game at GISH. (Independent/Josh Salmon)