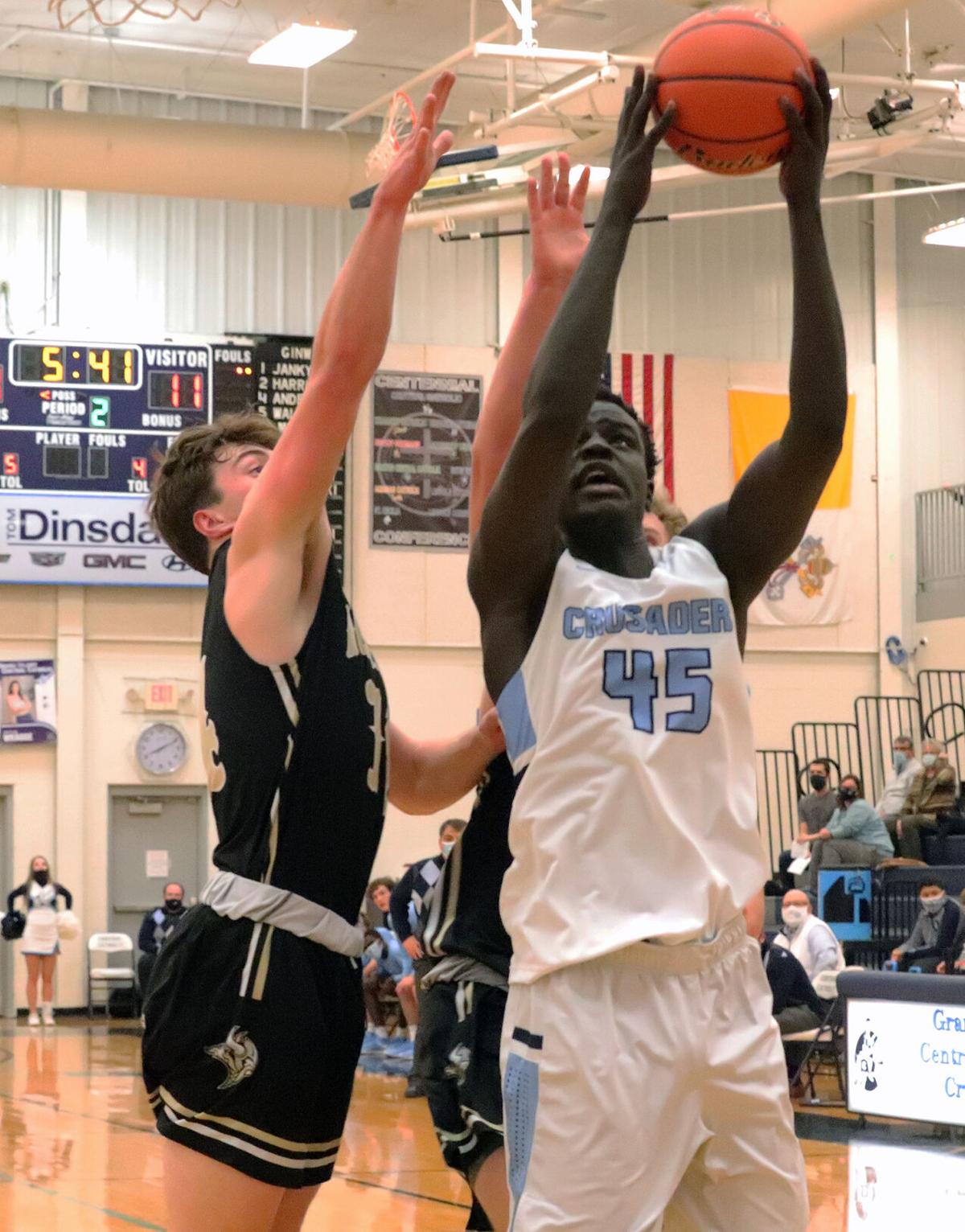 GICC senior Dei Jengmer drives to the hoop against Northwest defender Sam Hartman in the first half of Crusaders' 49-33 win Tuesday. (Independent/Josh Salmon) 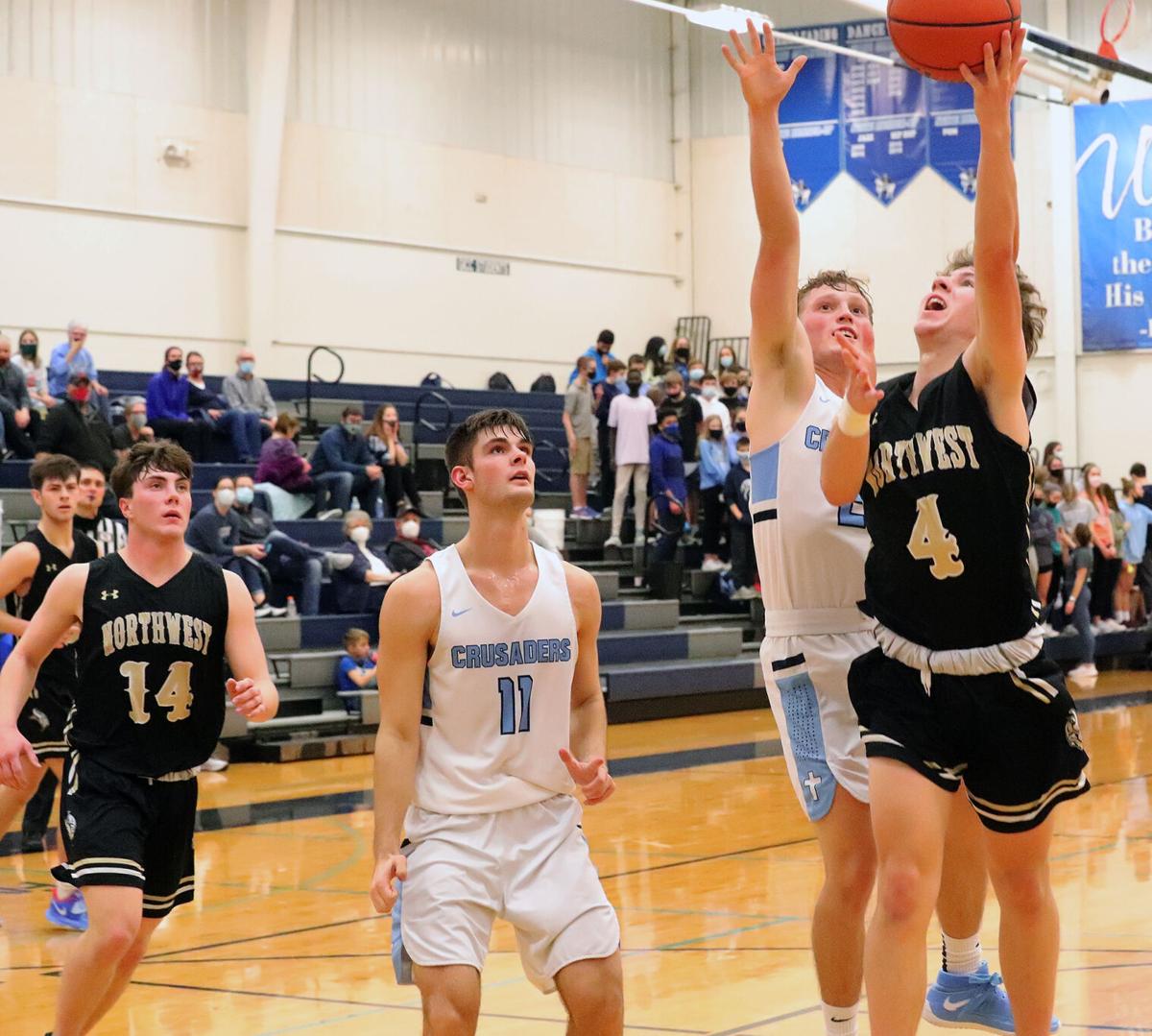 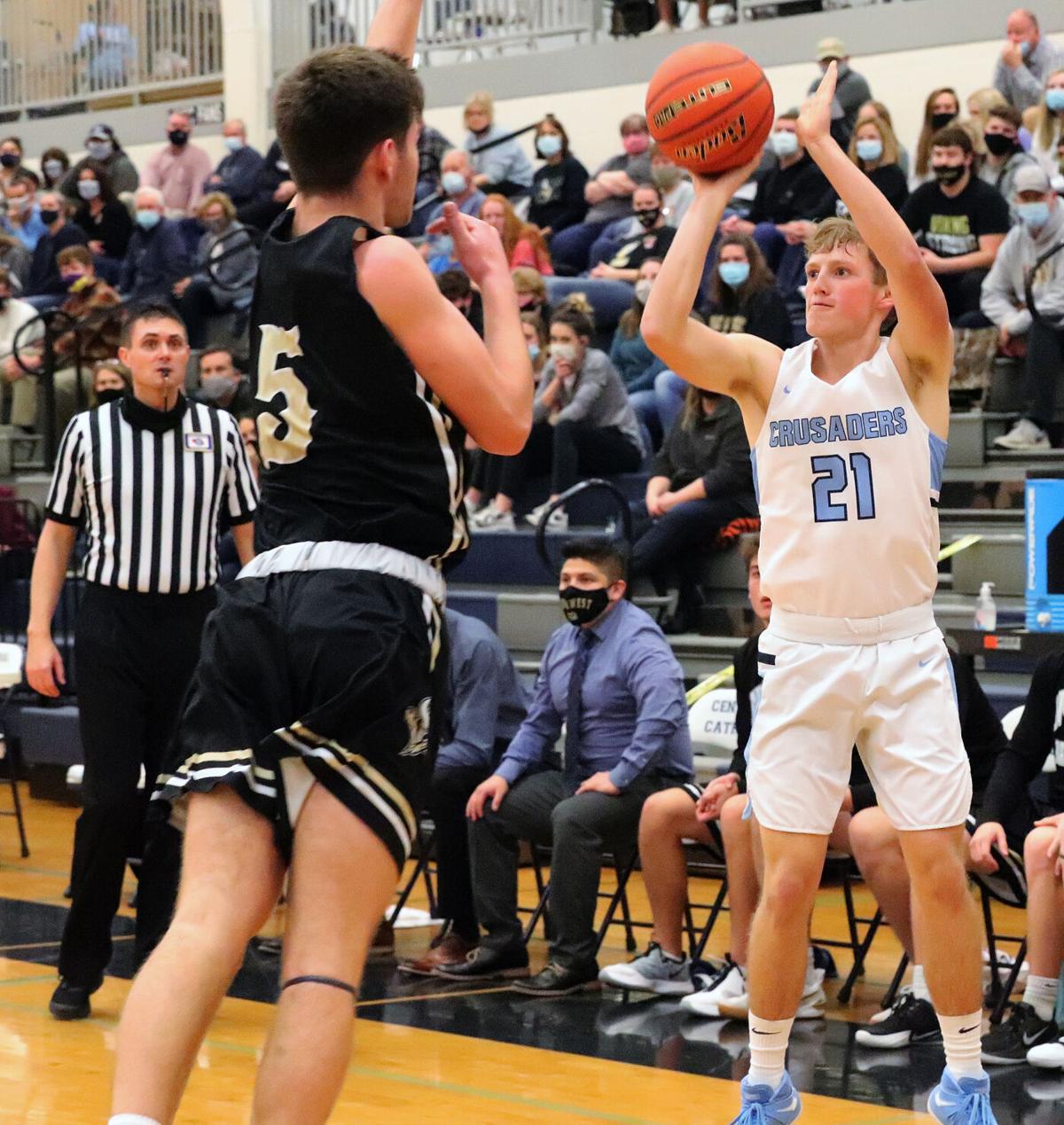 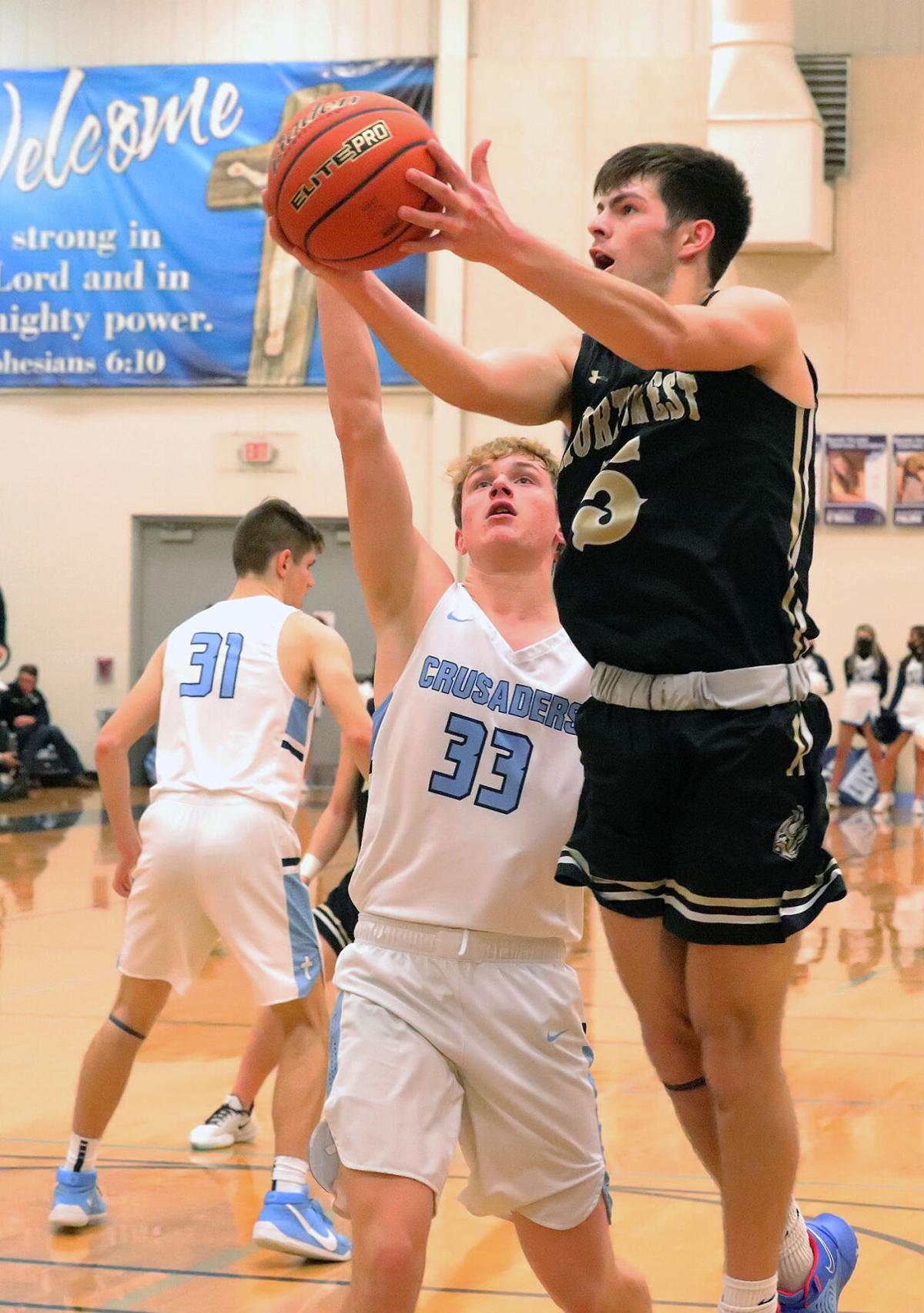 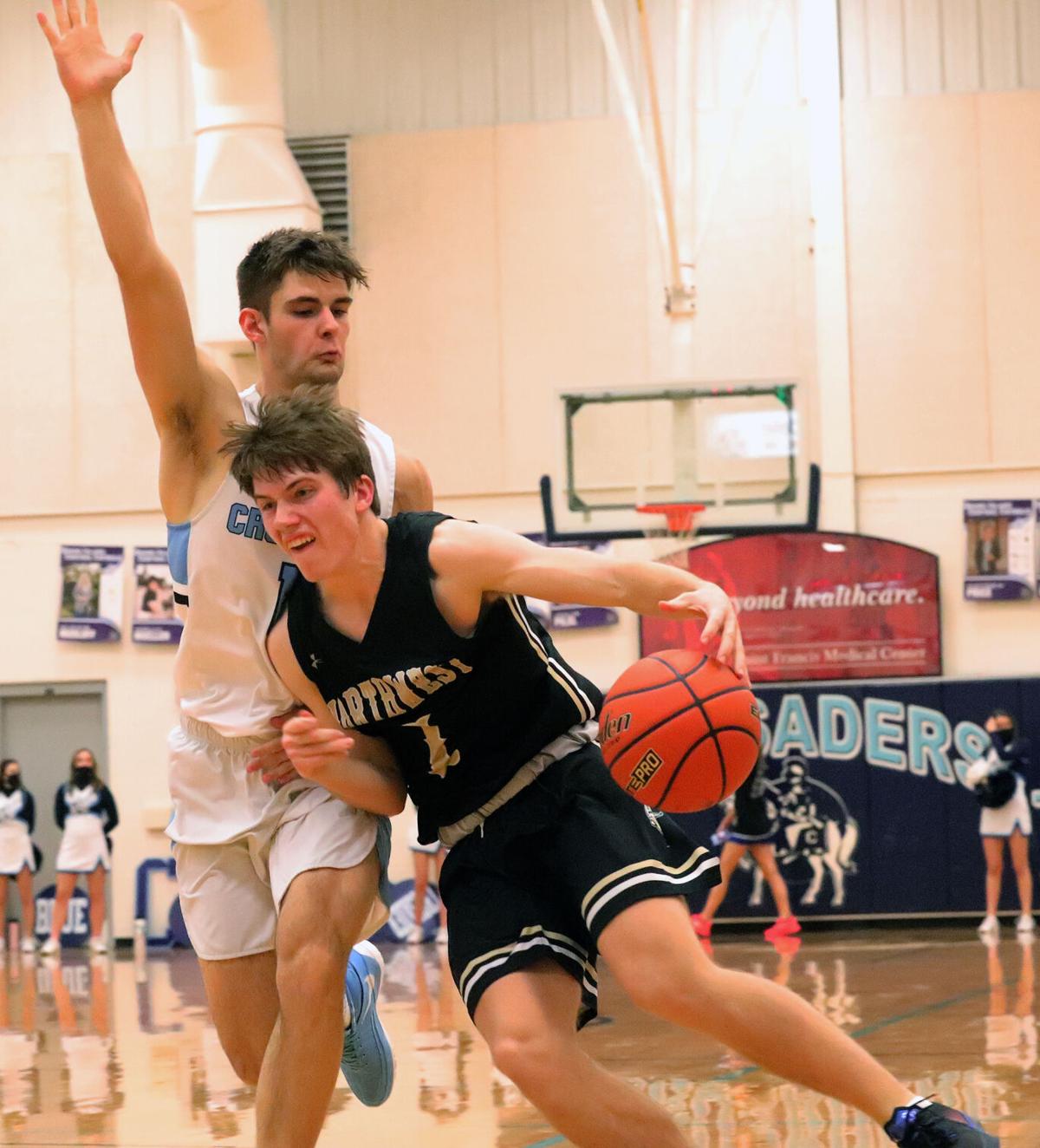 The stretch Class C-2 No. 1-rated Grand Island Central Catholic waited for and Northwest worried about finally arrived to start the second half Tuesday.

That was a much different look than in the first half, during which GICC outscored the Vikings 18-14 despite getting only nine points from its starters.

“We got the ball inside-out (in the third quarter), and that’s usually good to you,” Central Catholic coach Tino Martinez said. “I thought we settled for a lot of shots in the first half and lost our composure a little bit. But in the second half we cleaned that up, made some nice cuts, made some nice reads and Koby (Bales) made some nice passes to perimeter guys.”

Russ Martinez scored seven of his nine points during that run, and Northwest coach Chip Bahe said the senior guard finally getting some clean looks hurt his Vikings (5-4).

“They did what they’ve done all year,” Bahe said. “We talked that it was going to be a matter of squelching runs, and we just didn’t do it. We didn’t make a couple big shots and they did. They came out and did what they did. That’s why they’re playing well.”

That run came over the first 3:32 of the second half and followed up what Bahe said was a very encouraging first half for his team.

“I thought we had purposeful possessions and we really worked our tails off defensively,” he said.

GICC (10-0) navigated some foul issues and kept Northwest from scoring unanswered points until the fourth quarter.

“We were fouling way more than we usually do,” Tino Martinez said. “We were in the double bonus both halves, which is uncommon for us. We need to be more disciplined on some technique things, but overall we made it tough for them in the paint.”

Tanner Turek came off the bench to lead the Crusaders with 12 points on 4-for-8 3-point shooting. He hit six treys in last year’s game against Northwest.

But GICC did lose 6-foot-9 senior Dei Jengmer to an ankle injury in the second quarter. Tino Martinez said he hoped it was more of a bump than anything that would sideline Jengmer for a longer stretch of time.

That’s especially true as the Crusaders continue their January grind. That resumes Friday at C-1 No. 3 Kearney Catholic and Saturday at home against C-2 No. 5 Doniphan-Trumbull.

But with every starter back from last year, Central Catholic knows how to navigate this difficult stretches.

“The kids start talking about it when we get to this second third of the season,” Tino Martinez said. “They kind of say, ‘Hey, it’s the grind. It’s the NBA schedule.’

“I think experience is something we need to lean on to get us through that because the preps are short. You play and then we’ve got two days for Kearney Catholic. I’d like five or six for them.”

Northwest, which was led by Riley Anderson’s 11 points, knows something about grinding schedules. The Vikings will face Columbus Lakeview Friday in their home opener — in the 10th game of the season.

“Nobody’s been on the road nine straight times,” Bahe said. “To end a road run at Grand Island Central Catholic on a Tuesday is pretty fitting.

“I’m proud of these guys. They battled awfully hard but, boy, we have been on the road. It’s not just short ones. It’s two-hour trips. We’ll never made excuses. We’ve just got to continue getting better. We’re better now than we were game one and two.”

Other options were considered, but, in the end, “They definitely came through for us,” NSAA director Jay Bellar says of PBA and LPS.

Millard West shot about 51% while holding Grand Island to 34% and forcing 20 turnovers during a 53-26 win over the Islanders Saturday.

Results from Thursday including the Burwell boys barely remaining undefeated and the Wood River girls winning a C-2 top 10 battle with Sutton.

The Aquinas wrestling team showed why is a team to be reckoned with when the state tournament comes around.

Grady Arend's 150th career victory was one of the highlights during Northwest’s 64-12 victory over Seward Thursday at Northwest High School.

Here are the top players from the area in six different categories:

Central City wrestling coach Darin Garfield and the coaching staff couldn’t wait for the group they have now to get to the high school level.

Experienced Burwell one of five undefeated teams left in the state

Despite being one of the last teams to take to the court to begin practices this season (outside of Lancaster County) as usual, Burwell hit th…

In one week, there is no doubt that Wood River will fully qualify as “battle tested.”

GICC senior Dei Jengmer drives to the hoop against Northwest defender Sam Hartman in the first half of Crusaders' 49-33 win Tuesday. (Independent/Josh Salmon)