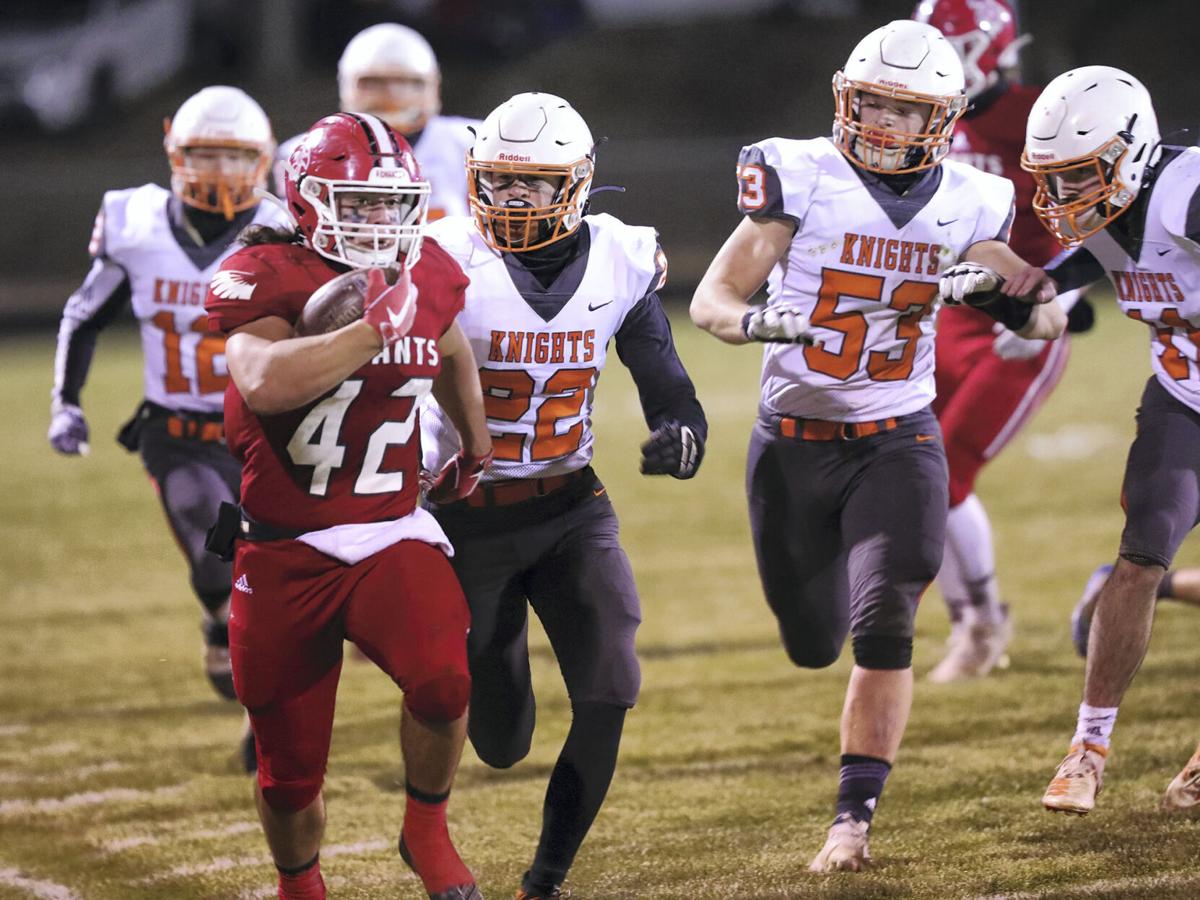 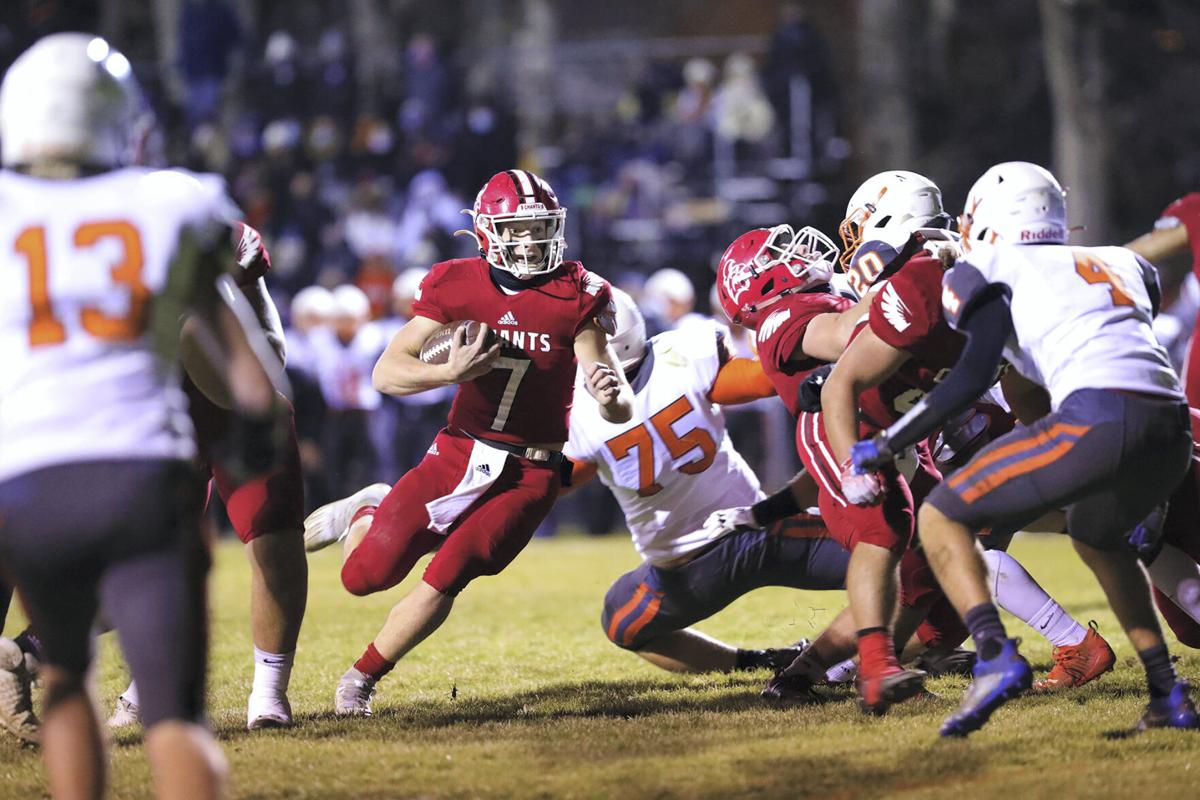 But that didn’t mean that the Chanticleers smoothly sailed into the championship game.

Ord saw the Knights rally for a 14-point deficit to tie the game early in the fourth quarter.

But a key run by quarterback Zach Smith along by interceptions by Smith and Kelen Meyer — the only two turnovers in the game — allowed the Chants to recover to post a 38-28 victory.

“We’ve put in so much work — so much work — in the offseason,” said Smith, who rushed for 173 yards and three touchdowns. “I’m just glad to see that it’s finally paying off.”

Then things started to turn. Oakland-Craig (9-2), whose only losses came to the two finalists, drove 80 yards in 13 plays to close within 28-21. Caden Nelson plunged into the end zone from a yard out on third down with 2:06 left in the third.

The Knights forced a three-and-out, and then disaster hit for Ord. The snap went high on Meyer, and after recovering the ball he didn’t have time to punt. He tried to scramble but was dropped for a 12-yard loss on the Ord 27.

Seven players later, quarterback Grady Gatewood pulled Oakland-Craig even with a 3-yard touchdown with 9:48 remaining in the contest.

“I said the other day that games like these are about the little things like turnovers,” Ord coach Nate Wells said. “That snap over the punter’s head, that could have been a killer for us because we kind of had all the momentum at that point. We get that punt off, pin them back deep there and score again, that thing’s over — or seemingly over.”

Ord seemed in potential danger of really seeing the Knights grab control of the momentum when it faced a third-and-4 at its own 26-yard line.

But Smith broke off a 57-yard run, and the Chanticleers went up for good on a 32-yard chip shot field goal by Meyer’s powerful leg with 7:17 to go.

“It was a huge momentum shifter,” Smith said. “Getting those three points, even though it was only three points, was huge. It just gave us that much more of a boost.”

Wells and the Chanticleers were looking for any positive momentum at that point.

“It seemingly went from we seem to have the game under control to...those kids are going to fight, scratch, claw, whatever, the whole game, and they ended up tying it up,” he said. “Zach made a big play there and we were able to go up by three. I’m just real proud of the guys. They just kept fighting.”

Smith made an equally big play when he picked off a pass to give Ord the ball back on the Knights’ 14-yard line.

“It just happened to fall right into my hands,” Smith said. “I had nothing to do with that.”

“They’ve got smart coaches and they’ve got really good players,” Wells said. “Being up by 10 there at the end gave you a little bit of comfort, but our kids kept stepping up and making plays.”

After the teams traded punts, an interception by Meyer — his eighth of the season — allowed Ord to run out the clock.

Smith said the Chanticleers didn’t panic when Oakland-Craig tied the game up.

“The mindset was bend, don’t break,” he said. “We knew that they were a tough team. They’ve been tough all season, and we knew that as long as we didn’t break, we’d be fine.”

Ord was fine thanks to its rushing game. Smith’s 173 yards didn’t even top the team in that category.

Senior running back Tommy Stevens had 184 yards and two touchdowns.

“Tommy’s really good and teams try to take him away a little bit,” Wells said. “That opens things up for Zach. But they both got it going tonight a little bit. Earlier we were just feeling them out a little bit. They were blitzing, and we were able to take advantage with some of the run concepts that we had there. We ended up busting off a couple of plays.”

Smith said the offensive line had a great game.

“Our big boys up front were making holes all night,” he said. “I can’t say how much I love and appreciate those guys. They do so much more than everyone knows.”

Ord advances to its second championship game appearance. It was the Class C-1 runner-up in 2018.

“Two years ago I don’t want to say was a surprise, but we got on a roll in the playoffs,” he said. “It was kind of an over-the-hump thing for the program. We went into that Aurora (championship) game, and we wanted to win. I don’t think any of our kids had a doubt in their mind that we were going to win that game, but Aurora was a little better than us, obviously.

Ord will travel to No. 2 Archbishop Bergan on Friday after the Nebraska School Activities Association announced that the finals will be held at the home site of the higher-seeded team and not in Lincoln’s Memorial Stadium.

That’s fine with Wells, who said the Chants would play in a sandlot or wherever they are told to show up.

All that matters to them is they found a way to stand one win away from a state title.