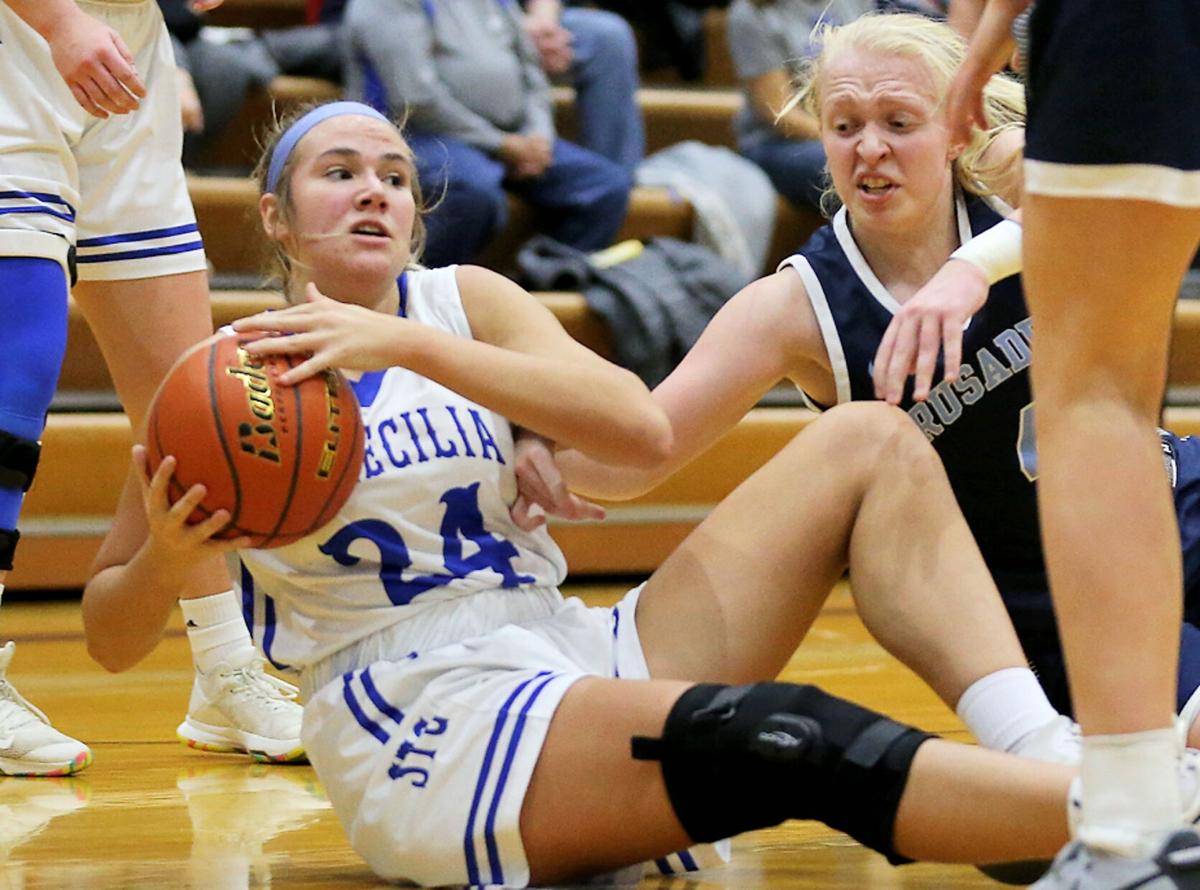 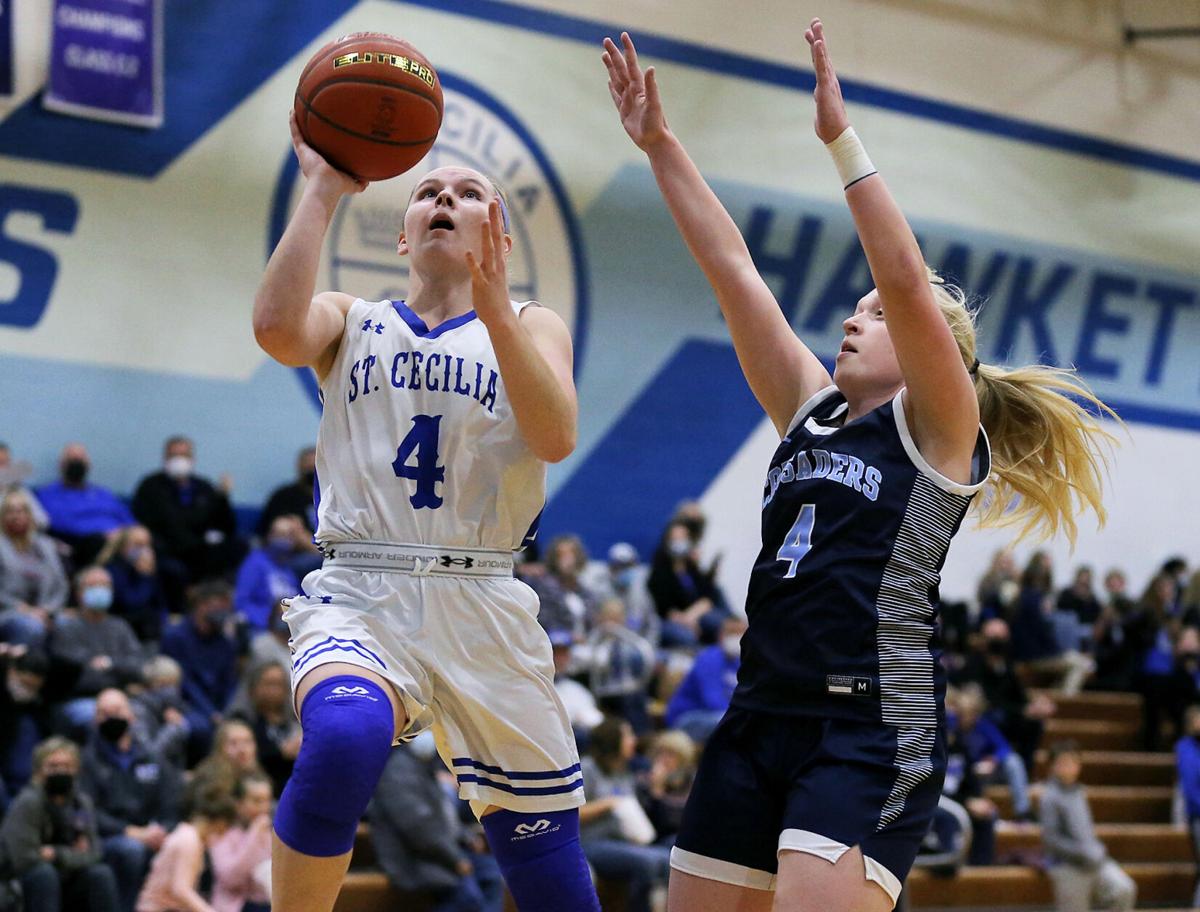 HASTINGS — Class C-1 No. 4-rated Hastings St. Cecilia did its best to eliminate any drama early during Thursday’s showdown with No. 3 Grand Island Central Catholic.

The Hawkettes opened the game by scoring the first 15 points and went on to win by that margin 41-26.

St. Cecilia coach Greg Berndt said he couldn’t expect that type of start, but it was certainly welcomed.

“It was the start we hoped for, definitely,” he said. “We came out really focused and determined on both ends. Jumping out like that alleviates any of the anxiety to start. Not only offensively but defensively, from the tip we said we’re ready to go and this is going to be a tough 32 (minutes) for you guys.

“I thought our kids played a whale of a game from the start.”

Bailey Kissinger scored six points, Katharine Hamburger five and Addie Kirkegaard four in the 15-0 run. That start was especially huge with St. Cecilia having not played since Feb. 2 after Saturday’s contest at Lincoln Lutheran was canceled by snow.

“First of all, St. Cecilia is a fantastic basketball team, and we knew that they were going to come out and punch us in the mouth – and they did,” GICC co-coach Kevin Mayfield said. “What I told the girls is we need to be able to take that punch and give it back to them.

“We just didn’t do it real well. We kind of played with deer in the headlights (looks). On a positive note, in the second half we made a few adjustments…and we did get a little better offensively.”

The Crusaders (18-2) missed their first eight shots before Carolyn Maser scored with 2:30 left in the first quarter.

And things didn’t get better for GICC until after halftime. It went scoreless in the second quarter, going 0-for-5 from the floor with 10 turnovers to fall behind 25-7.

The Crusaders have been a post-oriented offense in recent weeks, but St. Cecilia (19-2) was able to match up inside against GICC’s 6-foot-2 Chloe Cloud and 6-0 Lucy Ghaifan thanks to Kirkegaard (6-2) and Hamburger (5-11).

“I thought it was a pretty even match between Cloud and Ghaifan and our two down there,” Berndt said. “There haven’t been many times this year when our two have seen eye-to-eye with somebody. I thought that was probably going to be the key to the game, that battle there on the blocks.

Kirkegaard finished with 15 points and nine rebounds while Hamburger added 13 points and 10 boards. Kissinger chipped in 10 points and five assists.

Mayfield said things weren’t easy inside on the offensive end for the Crusaders.

“If we can get our posts to work a little bit harder, get our perimeter people to understand when they’re open and when they’re not open, I’m a firm believer we have two of the best posts in the state.”

Cloud had eight points for Central Catholic, which begins postseason play at home Tuesday against Doniphan-Trumbull.

The first state tournament appearance by a Wood River girls basketball team in 31 years is obviously a first in the lifetime of the current players.

Norfolk Public Schools has been placed on probation after a racial slur toward the Omaha Northwest girls basketball team came from the high school’s student section during a Feb. 12 game.

KEARNEY— It was just another night at the Cope Collesium for the Kearney Catholic High School boys basketball team.

The area’s four girls state basketball tournament qualifiers will see their bids to come away from Lincoln with a championship tip off on Wednesday.

LINCOLN – Bailey Kissinger sliced and diced her way through the Syracuse defense during Wednesday’s first round of the Class C-1 state tournament.

GICC top seed in C-2 field; other area boys state tourney qualifiers to face each other

ELKHORN — Class B No. 4-rated Elkhorn used a strong first half to propel itself to a 56-33 victory over Northwest in the District 7 championsh…

Hastings St. Cecilia’s bid for a third straight state championship begins with some unfamiliarity, which might not be a bad thing for the Hawkettes.