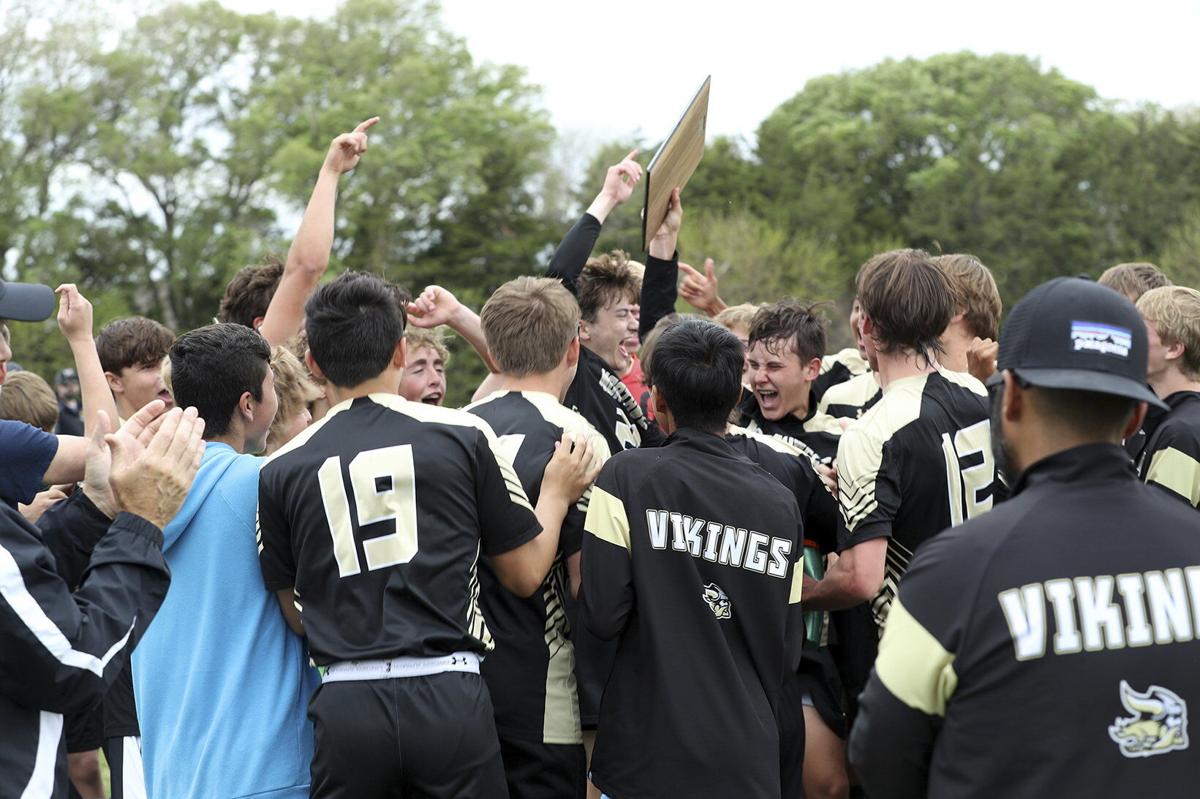 The Northwest boys soccer team celebrates its 1-0 Class B, District 6 win over Ralston Saturday at home. 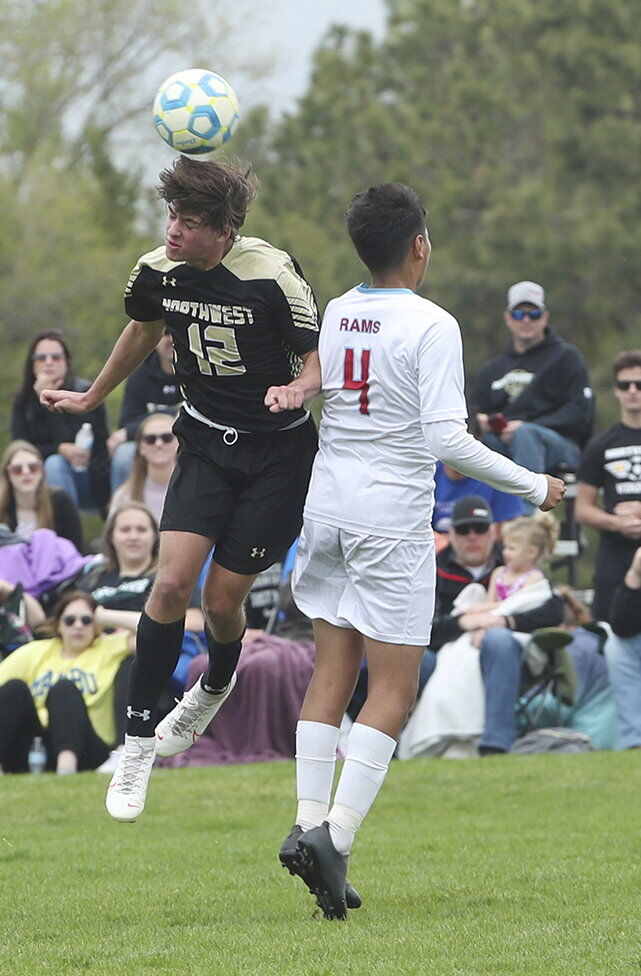 Northwest’s Caden Keller heads the ball before Ralston defender Hector Saqui can get to it in Saturday’s Class B, District 6 final. The Vikings won 1-0. 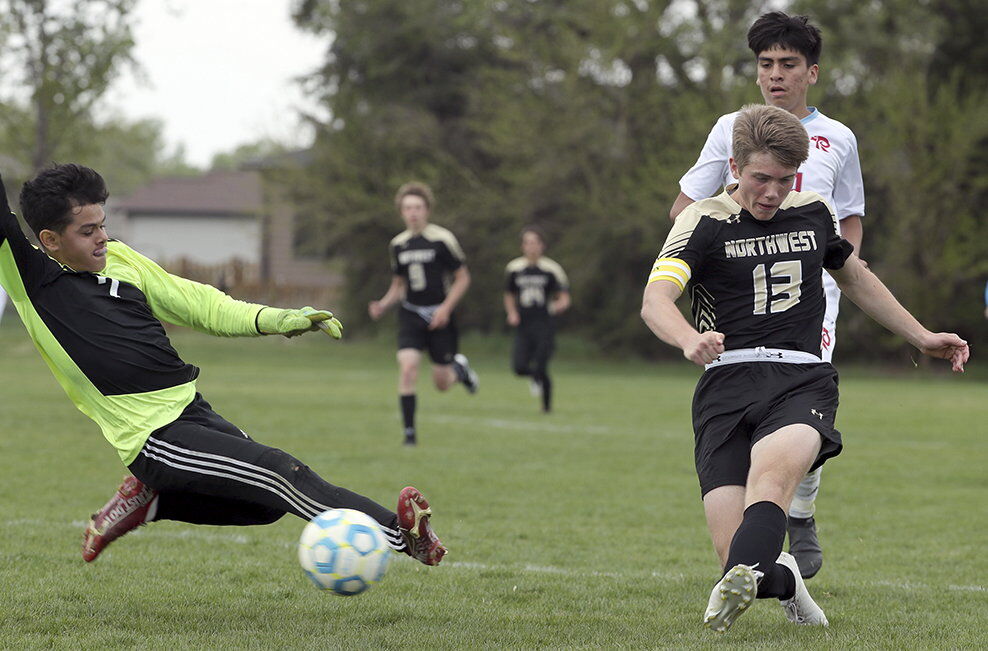 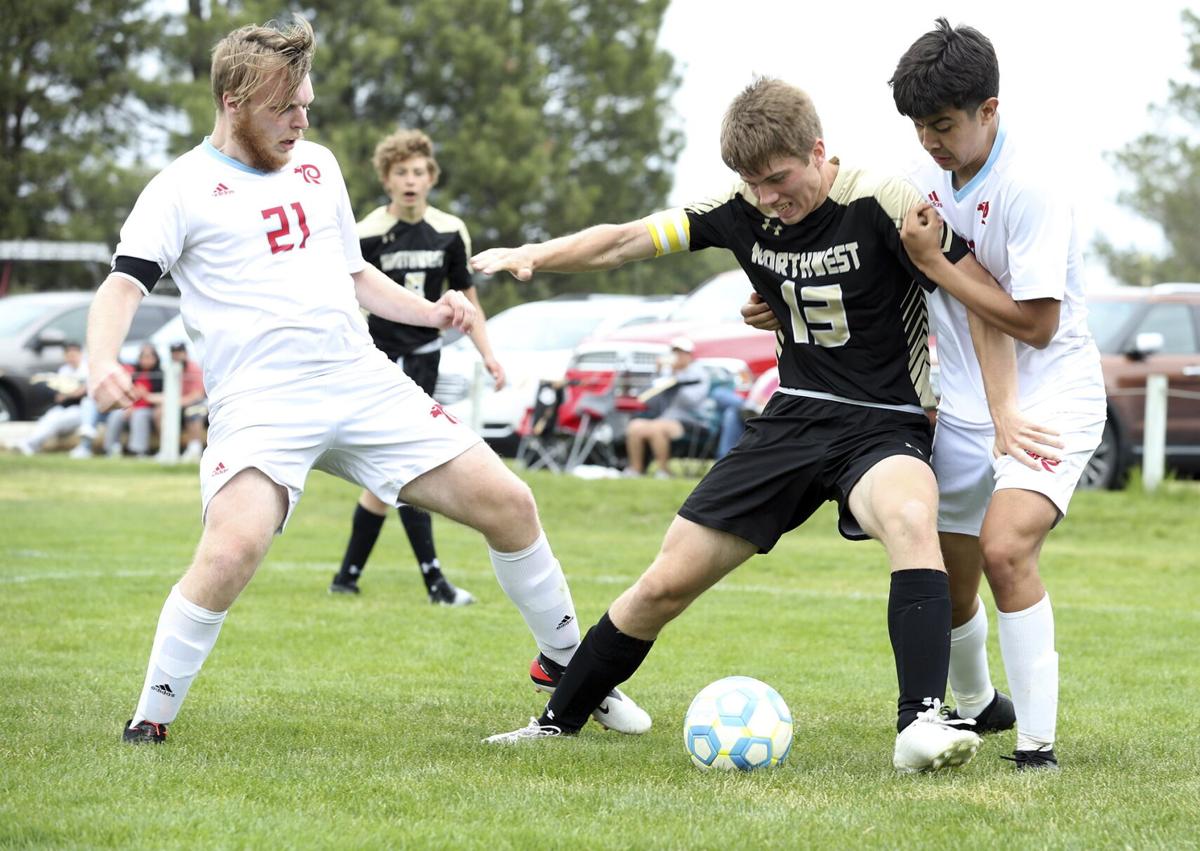 Northwest’s junior midfielder sent a 35-yard free kick on goal in the 30th minute. The ball eluded both Vikings and Ralston players trying to make contact with it during the Class B, District 6 final.

It also missed the keeper. But it didn’t miss hooking inside the post into the bottom left corner of the goal.

That proved to be the difference and allowed Northwest to qualify for a second consecutive trip to the Class B state tournament with a 1-0 victory.

“It’s surreal. It’s something you live for,” Ortiz said. “Growing up playing soccer, this is something I wanted.”

“I was trying to find Parker, but I guess it just kind of curled in,” Ortiz said. “That’s what we wanted, so it was all good.”

“That was a good little ping,” co-head coach John Kenna said. “We crowded that box and Parker ran right by it. I think he distracted the goalie a little bit, and that ball just found the bottom corner of the net. That was a 30-, 35-yard rip, so that was nice.”

“He’s so calm. He doesn’t get frayed,” she said. “He just gets out there and plays the game. We’ve got him playing exactly where he needs to play, and he can disseminate that ball wherever it needs to go. He is an awesome player.”

Ralston (10-9) generated some opportunities to tie, especially in the second half, but never found the equalizer.

No. 5-rated Northwest (13-3) thought it got an insurance goal in the second half, but Alex Lesiak’s score was disallowed by an offside call.

“We kind of thought for a little bit we had a cushion, but they called that offside,” Kenna said. “But they regrouped. They didn’t let that deflate them or cause them to lose their focus.”

Ralston pulled its goalkeeper up to help out on a late corner kick, but the Vikings were able to survive. The Rams were going to get another corner try when time expired.

“It takes everything,” said Ortiz of holding onto the lead. “You’ve got to put your heart on the field and leave everything out there.”

Northwest carries a seven-match winning streak into Thursday’s first-round of the state tournament at Morrison Stadium in Omaha.

“This is exciting,” Kenna said. “They deserve it and worked super hard. We’re now 13-3, which is phenomenal. It’s a good way to reward them by going to state. We can’t be prouder of them.”

Northwest makes its fifth state tournament appearance and second in a row after also qualifying in the most recent event in 2019.

The fifth-seeded Vikings will aim for their first state tournament victory when they take on fourth-seeded Bennington (15-3) Thursday at 7 p.m.

“What got us here was a lot of defense,” Purdy said. “Our back line did an awesome job. Those are a lot of our seniors – Eli Sattley, Connor Blackburn, Jacob Kaminski -- then (sophomore) Alex Korte. They all played a fantastic back line.

“(Goalkeeper) Zeke (Koenig) has 10 shutouts now, and if it wasn’t for our back line, that wouldn’t happen. Then we have some good midfielders like Trevyn Keene. They’ve all added so many parts and it has taken all of those players. We have 15 players who are key to our varsity team right now.”

NBA plans to start the new season in October

Lebron James changing his number because of Space Jam

Lebron James changing his number because of Space Jam

Why is the NFL expanding from London and Mexico to games in Germany?

Why is the NFL expanding from London and Mexico to games in Germany?

After leading Broken Bow to a state golf title and a state tournament appearance in basketball, Kelly Cooksley has been selected as the Independent's 2020-21 girls coach of the year.

It’s not how you start but how you finish.

Northwest to be well represented at NSWCA All-Star dual

Northwest will be well represented during the Nebraska Scholastic Wrestling Coaches Association all-star dual on Saturday.

Three city athletes will be on hand to represent Grand Island at the Shrine Bowl.

Much like his fastball, Drew Christo knows only one speed. The Super-State captain will soon see where it takes him

Drew Christo has 15 to 20 pro scouts showing up for games. He's likely to be drafted next month. Then it's decision time: college, or pro ball?

he Grand Island Unified Track and Field team found success from some of its athletes at the state track meet recently.

The Northwest boys soccer team celebrates its 1-0 Class B, District 6 win over Ralston Saturday at home.

Northwest’s Caden Keller heads the ball before Ralston defender Hector Saqui can get to it in Saturday’s Class B, District 6 final. The Vikings won 1-0.