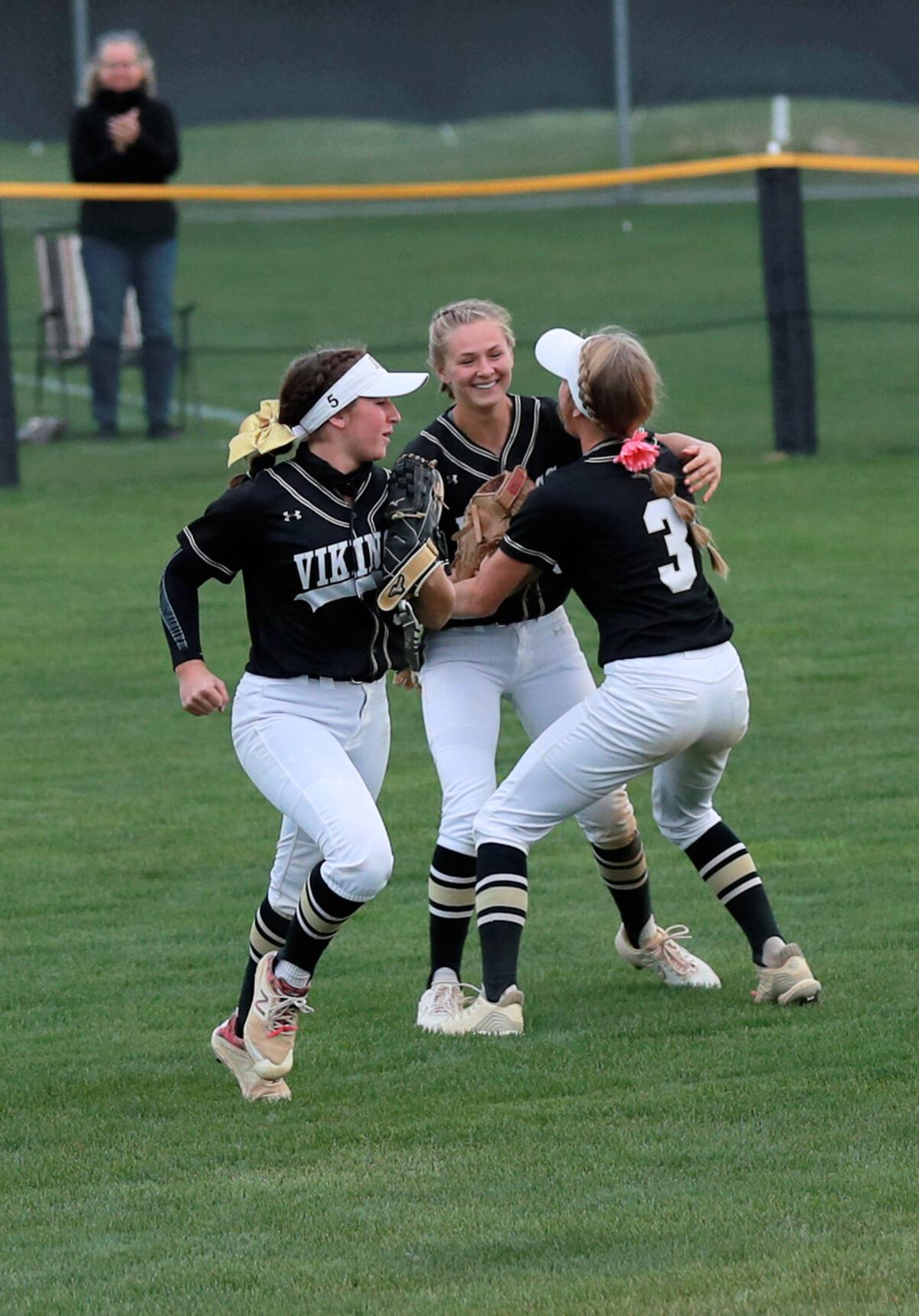 Emma Sundberg and Reba Mader celebrate with Avyn Urbanski after she caught a fly ball, making it the final out in the Northwest's 8-7 victory against Seward. (Independent/Carissa Soukup) 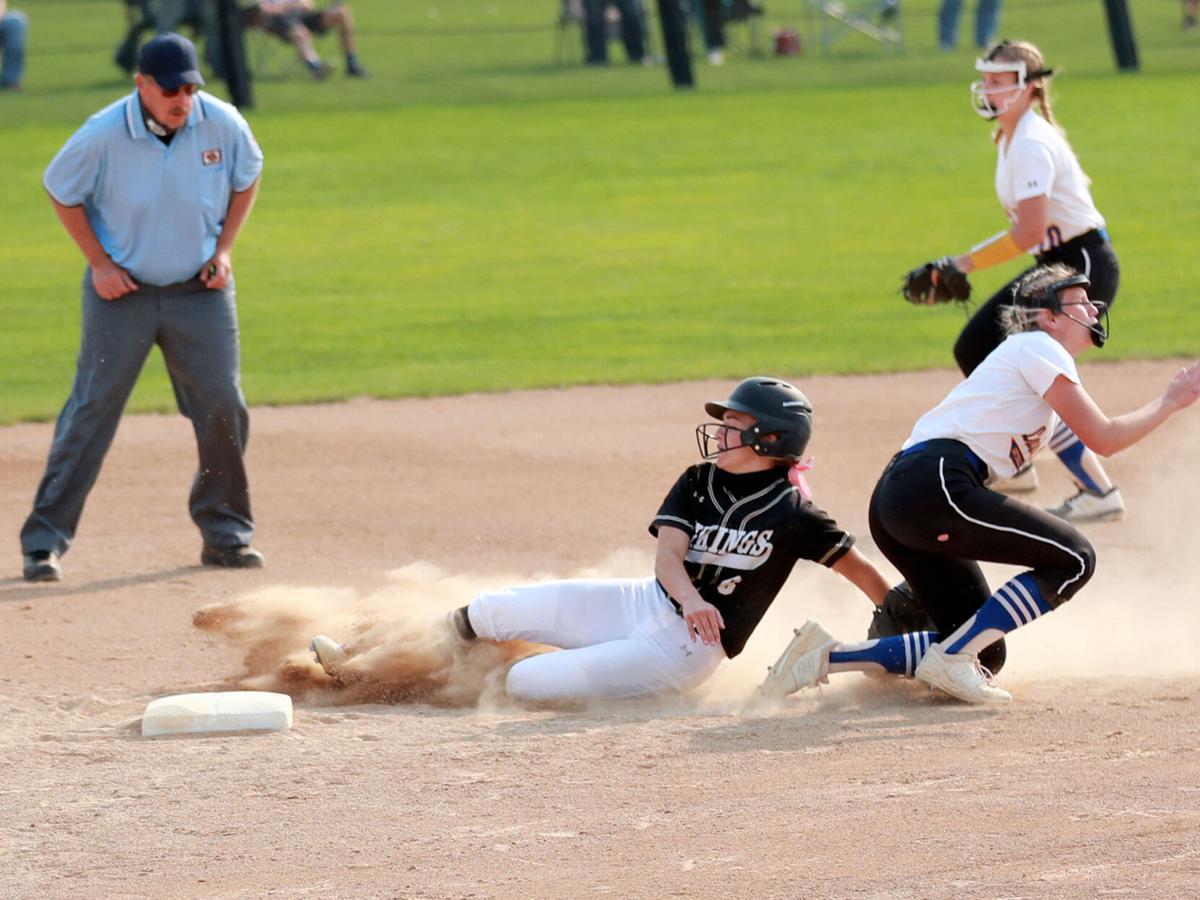 Grace Baasch slides into second base during Northwest's 8-7 victory over the Seward in the first game of state softball in Hastings. The Vikings fell to Omaha Skutt 8-1 later in the day. (Independent/Carissa Soukup)

HASTINGS – Northwest hopes to earn another shot at top-seeded Omaha Skutt in the Class B state tournament.

It will take at least two wins in the losers bracket to do so.

The fourth-seeded Vikings fell to the SkyHawks 8-1 Wednesday in a winners bracket semifinal at the Smith Complex.

Hannah Camenzind limited the Vikings (26-11) to four hits while striking out 13 and walking one. She also hit a home run.

Skutt (30-3) struck for a couple of runs in the bottom of the first with two outs. Sophia Hoffmann had an RBI double while Alexa Rose singled in another run.

Camenzind tacked on a solo home run in the third and Ruby Meylan added a two-run blast in the fourth.

In the first round, Northwest held on to take an 8-7 victory in a back-and-forth battle against Seward.

The game was tied at 5 going into the sixth when the Vikings struck for three runs. Avyn Urbanski hit a two-run single and another run scored on an error off a hot shot by Reba Mader off the glove of the third baseman.

Mader also had a three-run home run in the third inning that gave Northwest a 4-3 lead.

“My girls don’t have any letdowns,” Sadd said. “They never gave up. They kept hitting the ball. They knew we could hit (Seward pitcher Sydney Parra). We just had to get on it, and we finally did.”

Seward wasn’t done following the Vikings’ big sixth inning. The Bluejays closed to within 8-7 on Grace Hamling’s second homer of the game. But pitcher Ava Laurent got a pair of pop-outs to close out the win.

“We made the lessor mistakes,” Sadd said. “We had the one off the glove of the third baseman and had two more (runs) besides that. We just did the little things right to win that.”

“We’re going to have to win two tomorrow,” Sadd said. “We’ll face the winner of GICC and Crete, and we know that we can play with either of them. We’ve just got to play Northwest softball and get this one out of our head.”

GICC's Zach Cloud made the most of his first -- and only -- season of high school cross country.

The Class C-2 playoffs started a week early for Centura.

WOLBACH — Class D-2 No. 6 rated Central Valley gets plenty of attention for its balanced and explosive offense.

C-1 No. 4 GICC set up a subdistrict championship showdown against No. 2 St. Paul after Monday's first-round sweep of Doniphan-Trumbull.

Northwest, Grand Island Central Catholic go on the road for playoff opening round

Northwest and GICC drew road games when the playoff brackets for classes B, C-1, C-2 and six-man were released on Saturday morning.

Nebraska Christian used a balanced offense to get past Giltner and move into a subdistrict championship match.

Aurora got past Northwest in four sets to advance to a subdistrict final.

Emma Sundberg and Reba Mader celebrate with Avyn Urbanski after she caught a fly ball, making it the final out in the Northwest's 8-7 victory against Seward. (Independent/Carissa Soukup)

Grace Baasch slides into second base during Northwest's 8-7 victory over the Seward in the first game of state softball in Hastings. The Vikings fell to Omaha Skutt 8-1 later in the day. (Independent/Carissa Soukup)