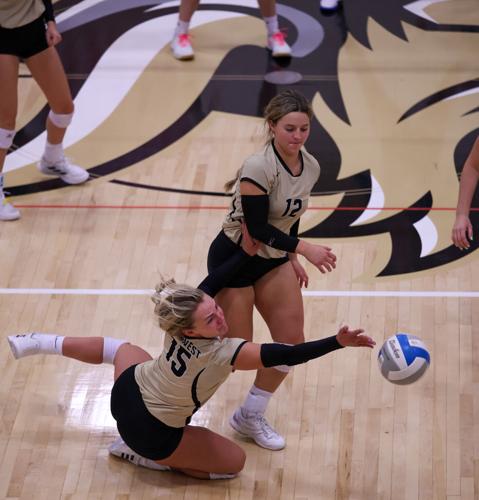 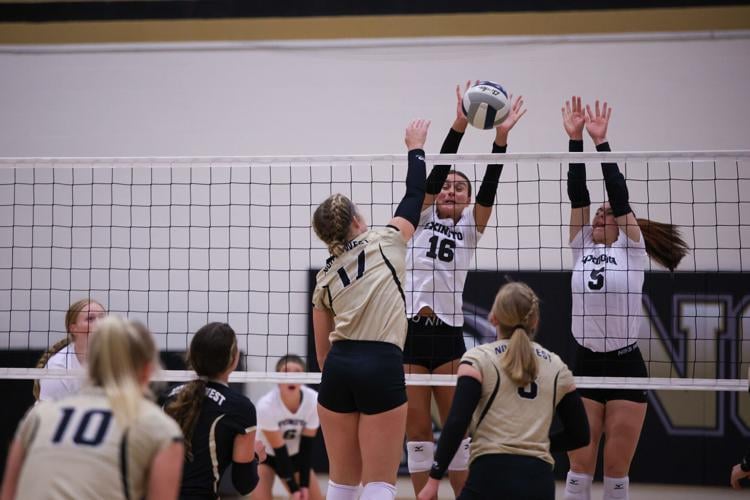 Northwest's Chloe Mader sneaks the ball past Lexington's Sierra Wagner and Reese Kuecker  to expand the lead during the first match of the Northwest triangular.

Lindsey Harders wanted the Northwest volleyball team to get off to a strong start against Kearney Catholic.

Unfortunately for the Vikings, that didn’t happen in either set.

The Vikings fell behind 4-0 to start the match and then 11-6 in the second, forcing them to play catch up.

“You can’t play from behind when play a team like Kearney Catholic,” Harders said. “I told the girls that we wanted to be the first to five, 10 and 15 and we didn’t do that in either set. We need to get off to better starts.”

The Vikings did come back to tie it the score around the midway point of both sets, but Kearney Catholic always had the answers.

In the first, Northwest took the lead at 14-13. But after a service error, the Stars went on an 11-3 run to take the opening set. Kearney Catholic’s serving kept the Vikings out of system a lot in the first set that Northwest only managed four kills, three by Whitney Loman.

The score was tied at 15-all in the second set before a Londyn Carnes kill broke the tie. Then Jenna Bosshamer delivered back to back ace serves to take the lead to 18-15.

The lead grew to 23-18 on a Payton Dzingle kill, but the Vikings got back into the match with a 5-1 run to cut the deficit to 24-23 before the match ended on a service error.

The Kearney Catholic block did enough to disrupt the Northwest attack throughout the night, even though the Stars had only six blocks. Carnes had four blocks but also had a team-high seven kills. KC coach Kris Conner said she was pleased with that.

“Landyn (a 6-3 junior) is a big block for us and she reads the ball very well to get a good block up there,” Conner said. “And Payton (Dzingle) has a nice block form and she loves to block. You don’t really find many kids that like to do that.”

Harders said she felt that was a factor.

“They got some touches on their block and there was a few that came back on us that we either covered or went down,” Harders said. “I think that part of the game frustrated us.”

Against Lexington, Northwest fell behind early in both sets but took control around the midway of each.

Loman led the Vikings with 10 kills, while Stoppkotte added five. Caspar had 11 assists and Middleton had seven.

The matches featured the return of Chloe Mader. The Viking senior contributed with two kills in both matches. Harders said Mader is slowly getting back to 100 percent.

“She needs to trust herself because I think she wants to go in and be what she was before she got hurt,” Harders said. “She wants to pound the ball as hard as she can. She took some good swings tonight and got some kills. She needs to get that confidence rebuilt. Her ankle is 100 percent but as a volleyball player, she’s not there yet, but she’s getting there.”

The previous two seasons, Northwest was a combined 1-6 against Hastings.

Following in her big brother’s footsteps might not be the easiest thing for Grand Island’s Tia Traudt.

After battling an illness during the Central Conference Meet on Friday, Olivia Ottman was feeling much better during the Class B, District 3 M…

Northwest's Chloe Mader sneaks the ball past Lexington's Sierra Wagner and Reese Kuecker  to expand the lead during the first match of the Northwest triangular.