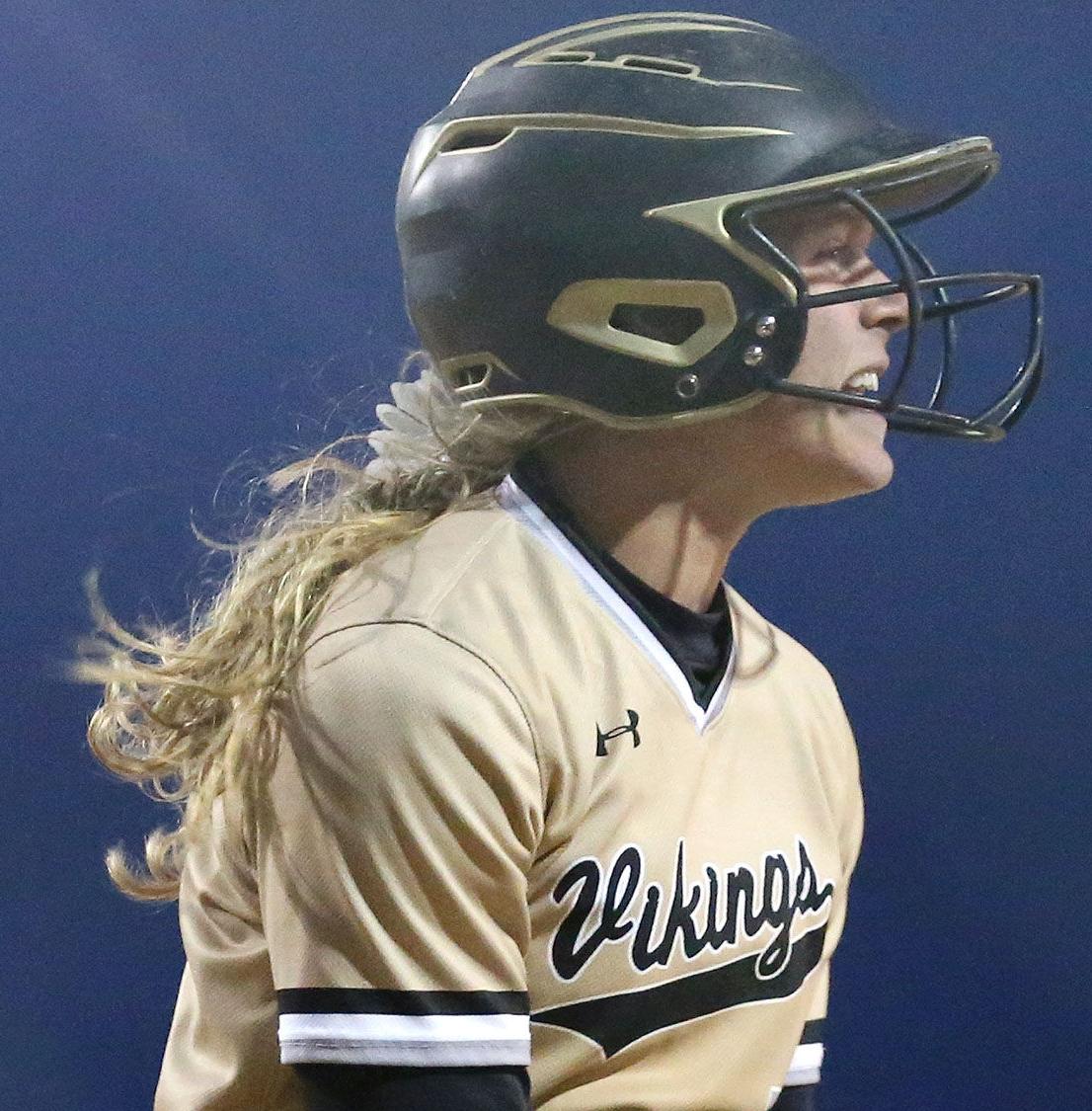 Northwest's Reba Mader celebrates scoring the go-ahead run in the sixth inning during the Class B state softball tournament against Bennington. The Vikings won the elimination game 14-12. The win was one of three elimination games won by the Vikings, who will play Friday.  (Independent/Josh Salmon) 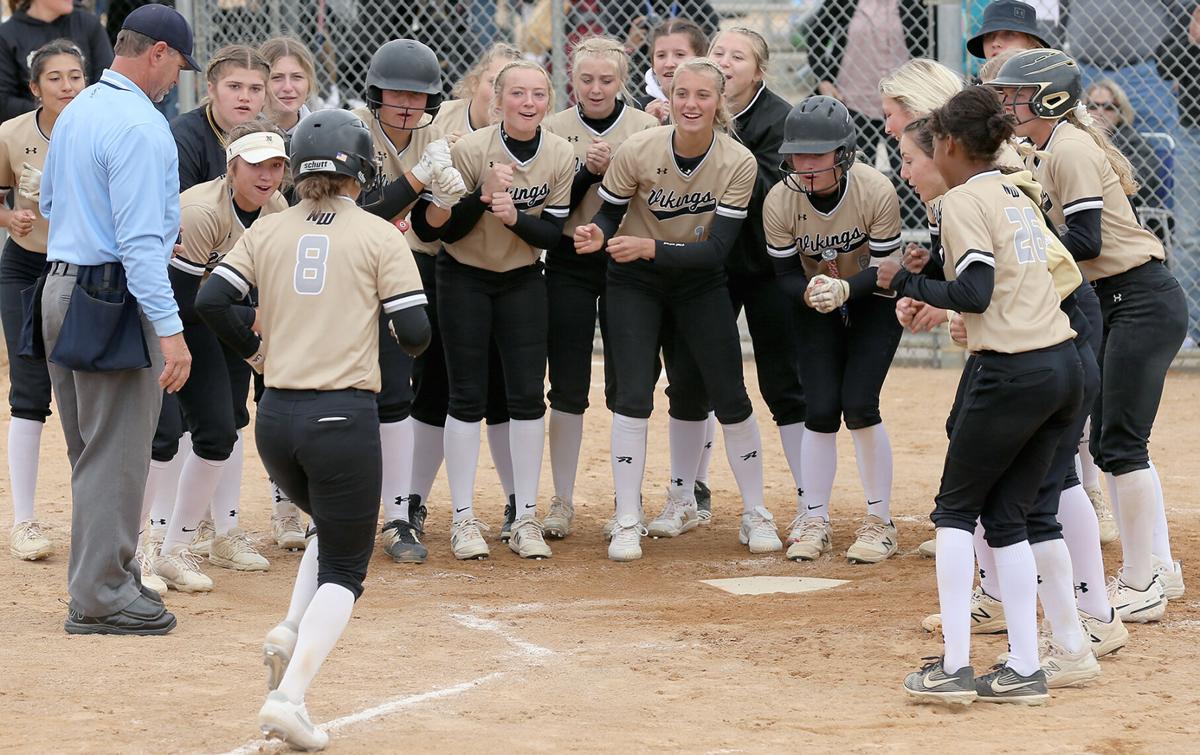 The Northwest softball team celebrates while greeting Avyn Urbanski after her home run against Wahoo in the Class B state softball championships in Hastings Thursday. (Independent/Josh Salmon) 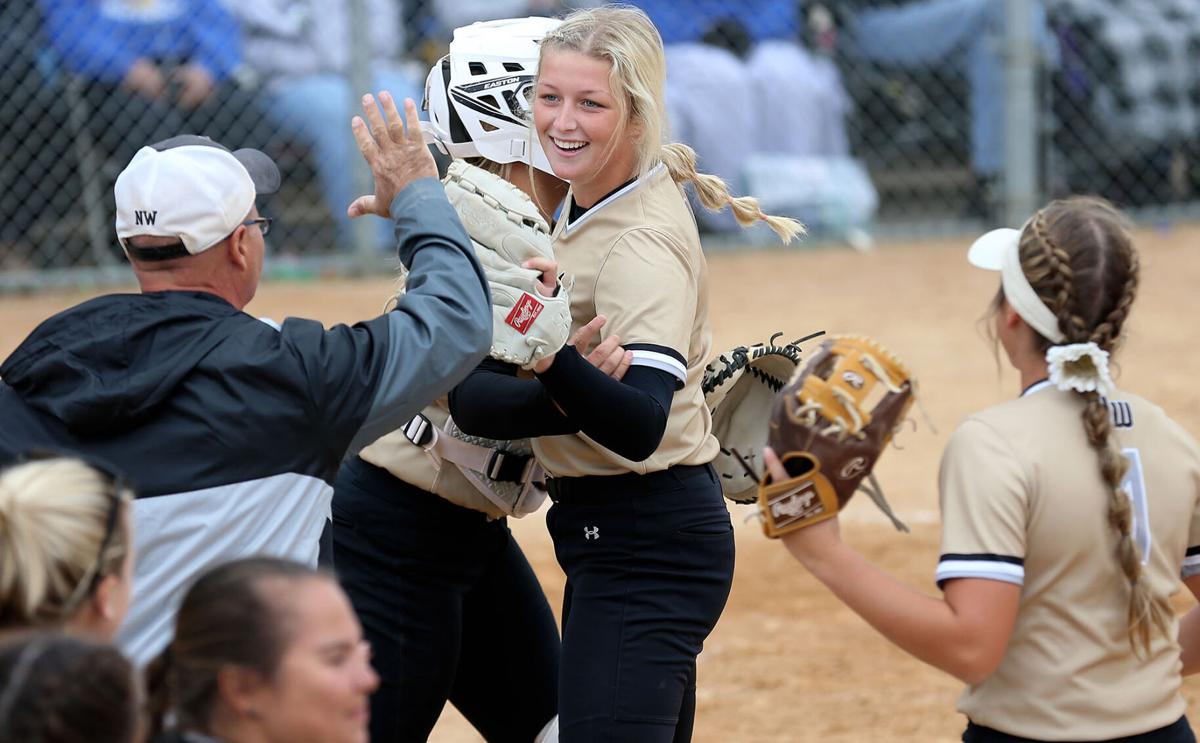 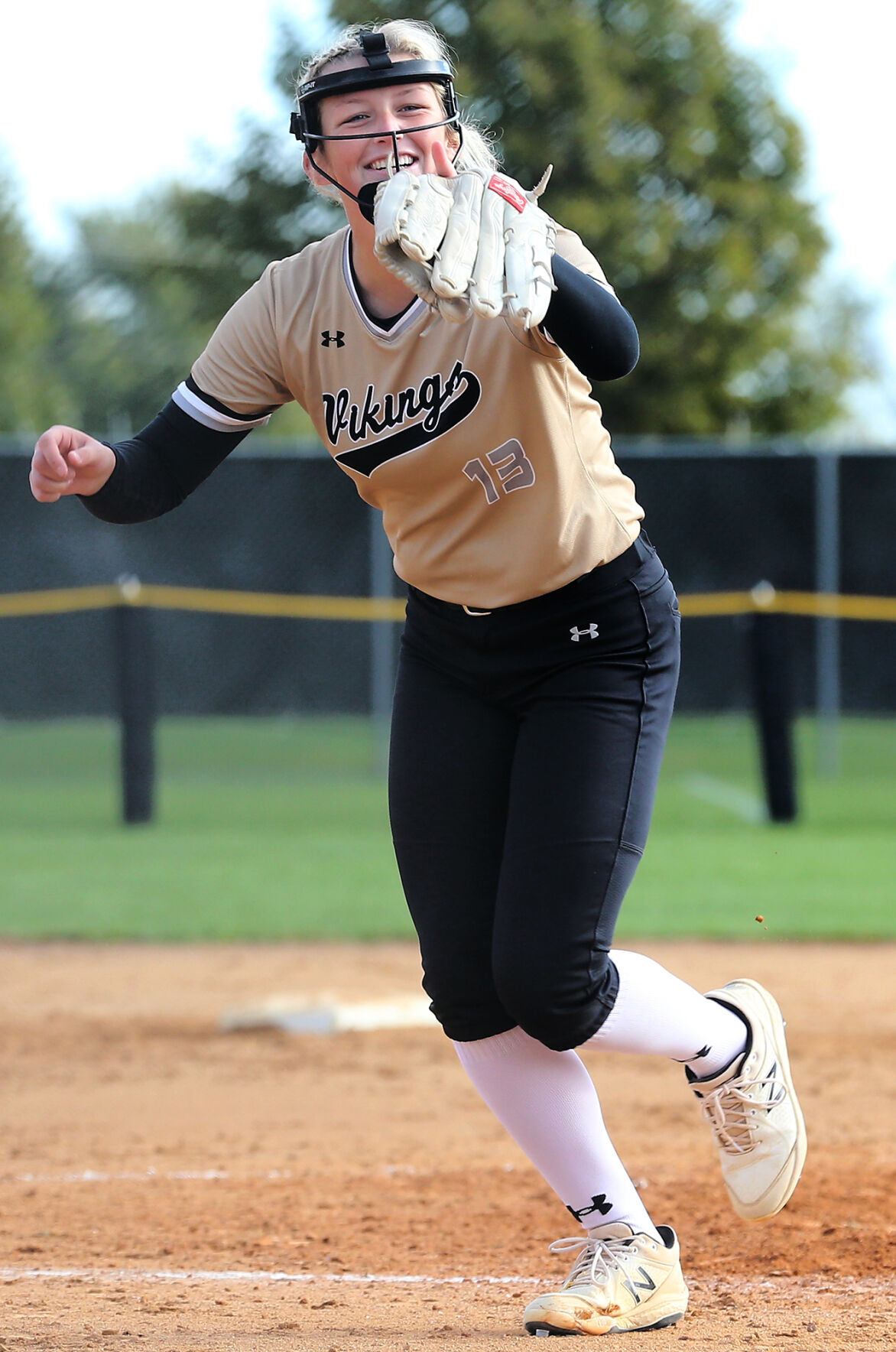 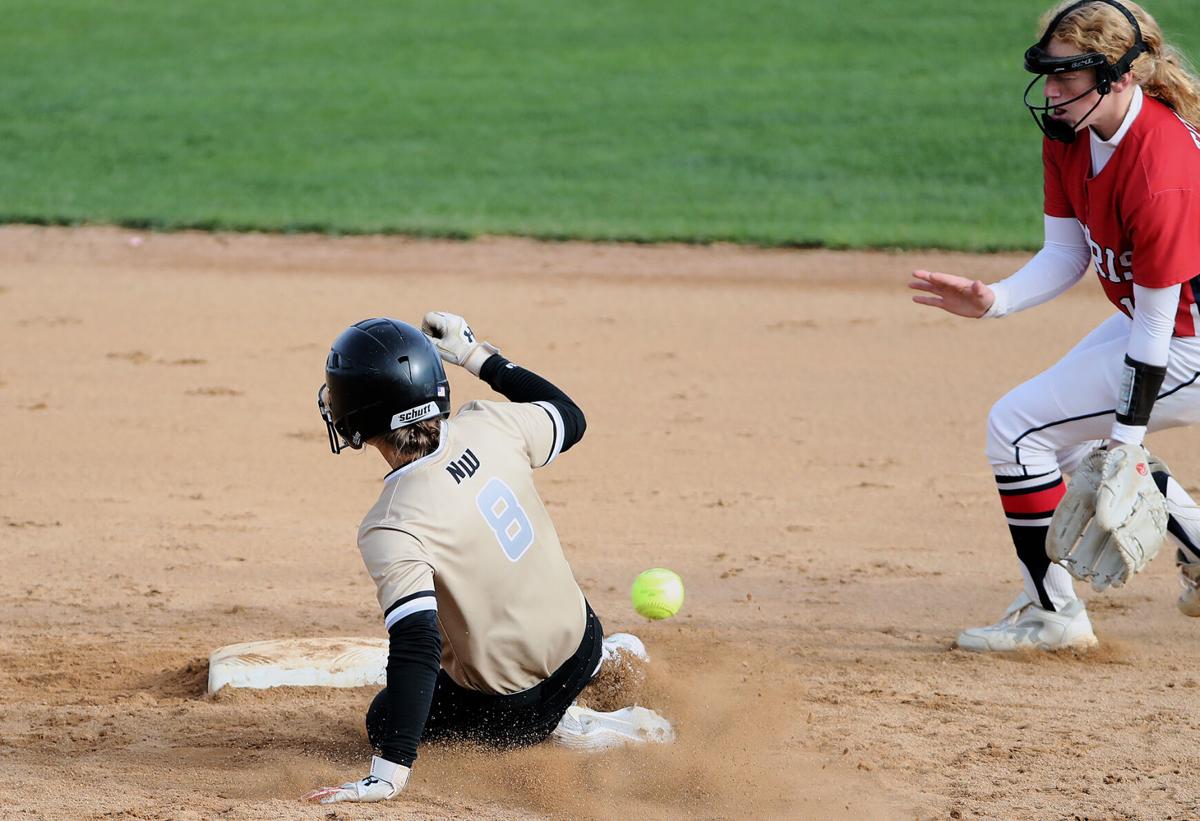 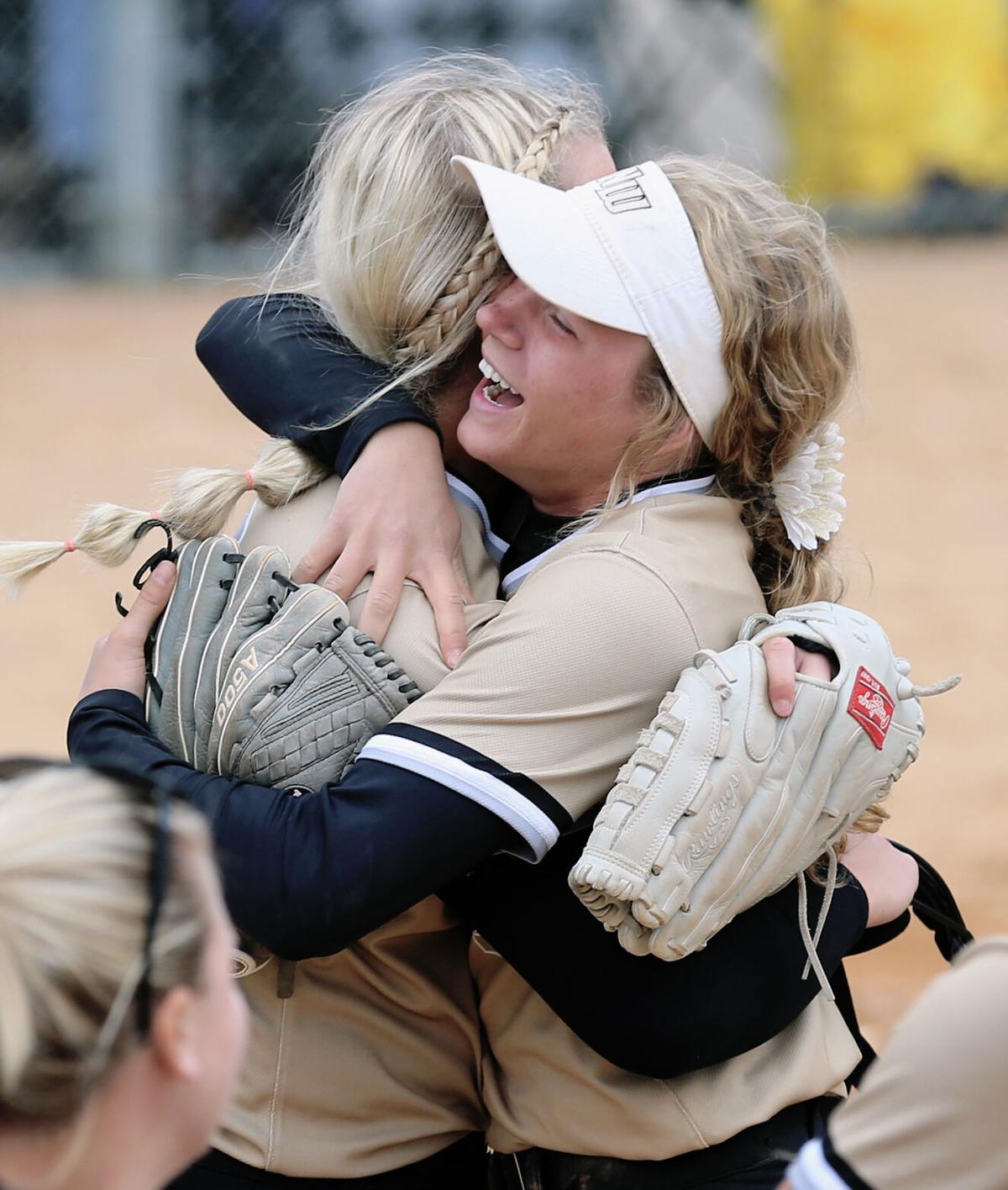 Northwest's Reba Made hugs tea mate Ava Laurent after their 4-1 win over Wahoo in the Class B state championships in Hastings Thursday afternoon. (Independent/Josh Salmon)

HASTINGS – Through five innings, Northwest must have suffered from a sense of déjà vu playing Bennington for the second straight day at the Class B state tournament.

Just like in Wednesday’s win by the Badgers, the Vikings took a lead in the top of the first but trailed before their next at-bat Thursday in a Class B state tournament elimination game.

Just like in the first meeting, Northwest kept creeping closer only to miss out on posting a big inning due to the lack of one key hit.

That all changed in the top of the sixth.

Northwest exploded for eight runs to rally past Bennington 15-12, capping off a three-win day in elimination games and advancing to Friday’s final three for the first time in program history.

“It’s so exciting – something new,” said senior first baseman Ahdri Medrano, who went 3 for 4 with three RBIs against Bennington. “We’ve never made it this far, so we’re just going to keep fighting from here.”

Junior second baseman Maddy Cushing, who went 4 for 5 with two RBIs and three runs, said it is a thrill.

“Making it to Friday is just incredible for us,” she said. “It is so much to accomplish already.”

It was an emotional 180-degree turn for Northwest from a year ago when the Vikings lost on a walk-off to Hastings in the final elimination game of Thursday’s play.

“It’s been a phenomenal ride,” coach Mitch Sadd said. “We got fourth last year, and that’s the best Northwest has ever done. We come here and get down, but my girls didn’t ever break. We bent, but we went right back at them.

“It’s a much different feeling. We’re going onto championship Friday. Northwest has never done it. I’m happy to be on that ride.”

Trailing 8-6 entering the sixth, Northwest’s offense came through with the huge inning it had searched for over two days against Bennington.

Reyse Zobel got an RBI single with one out, and Kylie Caspersen singled home a pair to put Northwest up 9-8.

But the Vikings weren’t done. Cushing doubled home a run and Medrano added a two-run single as they gave the Vikings a big boost from the No. 7 and 8 spots in the order.

“The environment gets you going and then the dugout gets you excited,” said Cushing, who finished 6 for 9 on the day.

“Maddy was finally hitting the ball well and they finally had to play her back because she was hitting it over their heads,” Sadd said. “Maddy Cushing came out and had a great game.”

Grace Baasch’s two-run single capped off the eight-run outburst and her 4 for 5 game with three RBIs and two runs.

Bennington wasn’t done, though. After walking Taylor Sedlacek – who homered twice earlier in the game – to load the bases, the Vikings got a second out before witnessing Abi Brown hit a grand slam to pull the Badgers back within 14-12. But they never got any closer, and Northwest was able to celebrate its first trip to the championship.

“It means everything to us. We’re so excited,” Medrano said. “We just need to keep our spirits up and keep our teamwork together, and then we’ll be fine.”

Northwest couldn’t figure out a way to cool off Bennington’s bats early on.

For the second straight day, the Badgers hit three early home runs to lead to an early exit for Northwest ace Ava Laurent.

Laurent dominated Bennington during a 4-1 win on Sept. 25 in the Crete Invitational. She gave up one run on two hits with nine strikeouts and one walk over six innings.

But the Badgers turned the table during the two state meetings, scoring 13 runs (nine earned) on 10 hits with six home runs and four strikeouts over 3 1/3 innings against.

Sadd said a pitching switch to Caspersen set up the comeback.

“Bringing in Kylie slowed them down,” he said. “They had seen Ava twice because they saw her in Crete and they saw her yesterday. We decided to change it up because they were hitting Ava pretty well. My gosh, Kylie threw a great game.

“Did she give up a grand slam? Sure, but at that point it didn’t really matter. That’s why we walked the girl because she had already hit three (homers in the tournament) against us already.”

Northwest waited for two days for that one big inning.

In Wednesday’s contest, Northwest took a 3-0 lead in the top of the first only to trail 4-3 by the next time it came up to bat.

This time, the Vikings led 2-0 after the top of the first only to trail 3-2 by the next time they came up to bat.

Sedlacek led Thursday’s home run derby with solo shots to lead off both the first and second innings. Maddie Scobee gave the Badgers consecutive homers in the second and a 5-2 lead.

Northwest (30-7) trailed by five before starting a comeback.

“We came in and told our dugout we needed to stay up and do everything we can in the dugout,” Medrano said. “Then we took that energy and put it on the field. I couldn’t have done it without my teammates, either.”

Cushing added: “It took having energy all around and having the want and drive to do it. You have to all want it. The whole team came together and got the bats going.”

Northwest’s bats woke up early in the day to pound out 13 hits in a 15-1 three-inning rout of Norris. That avenged two early-season losses to the Titans.

Senior Emma Sundberg, who had nine hits and three RBIs in 36 at-bats this season, drove in six runs and had a grand slam.

She finished the day with four hits and eight RBIs.

“I told Emma on the bus, ‘Hey, kid, you get to go today’ and she hasn’t hit much this year,” Sadd said. “But she hit that first double and hit a grand slam in that first game, then the second game does the bunts we needed.”

Laurent went 3-for-3 with a home run and four RBIs while retiring all six batters that she faced, including five via strikeout. Caspersen and Avyn Urbanski each had a pair of hits.

The Vikings followed that up with a 4-1 win over Wahoo. Laurent shut out the Warriors after allowing a run in the top of the first, scattering eight hits with 12 strikeouts and one walk.

Northwest successfully used small ball to beat Wahoo. An error on a Baasch bunt set up Zobel’s sacrifice fly in the bottom of the third to give the Vikings the lead for good.

Urbanski added some long ball with a homer to lead off the fifth, and an error on a Sundberg bunt allowed another run to score in the sixth.

“My team from top-to-bottom is good,” Sadd said. “We’re doing some great things now. We’re hitting the ball well. Defensively we’re making some heck of some plays. Going three games in a day at any level in a tournament is tough. Doing it at state when the competition is up, winning three games is unheard of.”

Now Northwest faces rival Hastings in Friday’s 11:30 a.m. losers bracket final. The Tigers own wins of 9-8 in nine innings, 8-3 and 12-1 over the Vikings this season.

“In the huddle I said the word ‘Hastings’ and I said to the girls I’m tired of us getting Hastings on the brain and then just falling apart,” Sadd said. “Tomorrow that’s not going to happen. We’re going to go right at them.”

The Northwest-Hastings winner advances to the championship game and would have to beat undefeated Omaha Skutt twice to win a state title.

Northwest's Reba Mader celebrates scoring the go-ahead run in the sixth inning during the Class B state softball tournament against Bennington. The Vikings won the elimination game 14-12. The win was one of three elimination games won by the Vikings, who will play Friday.  (Independent/Josh Salmon)

The Northwest softball team celebrates while greeting Avyn Urbanski after her home run against Wahoo in the Class B state softball championships in Hastings Thursday. (Independent/Josh Salmon)

Northwest's Reba Made hugs tea mate Ava Laurent after their 4-1 win over Wahoo in the Class B state championships in Hastings Thursday afternoon. (Independent/Josh Salmon)