Hastings St. Cecilia's Shaye Butler celebates a home run against Freeman in the Class C softball state tournament Thursday morning in Hastings. St. Cecilia won the game but later lost to Malcolm and is eliminated from the state. (Independent/Josh Salmon) 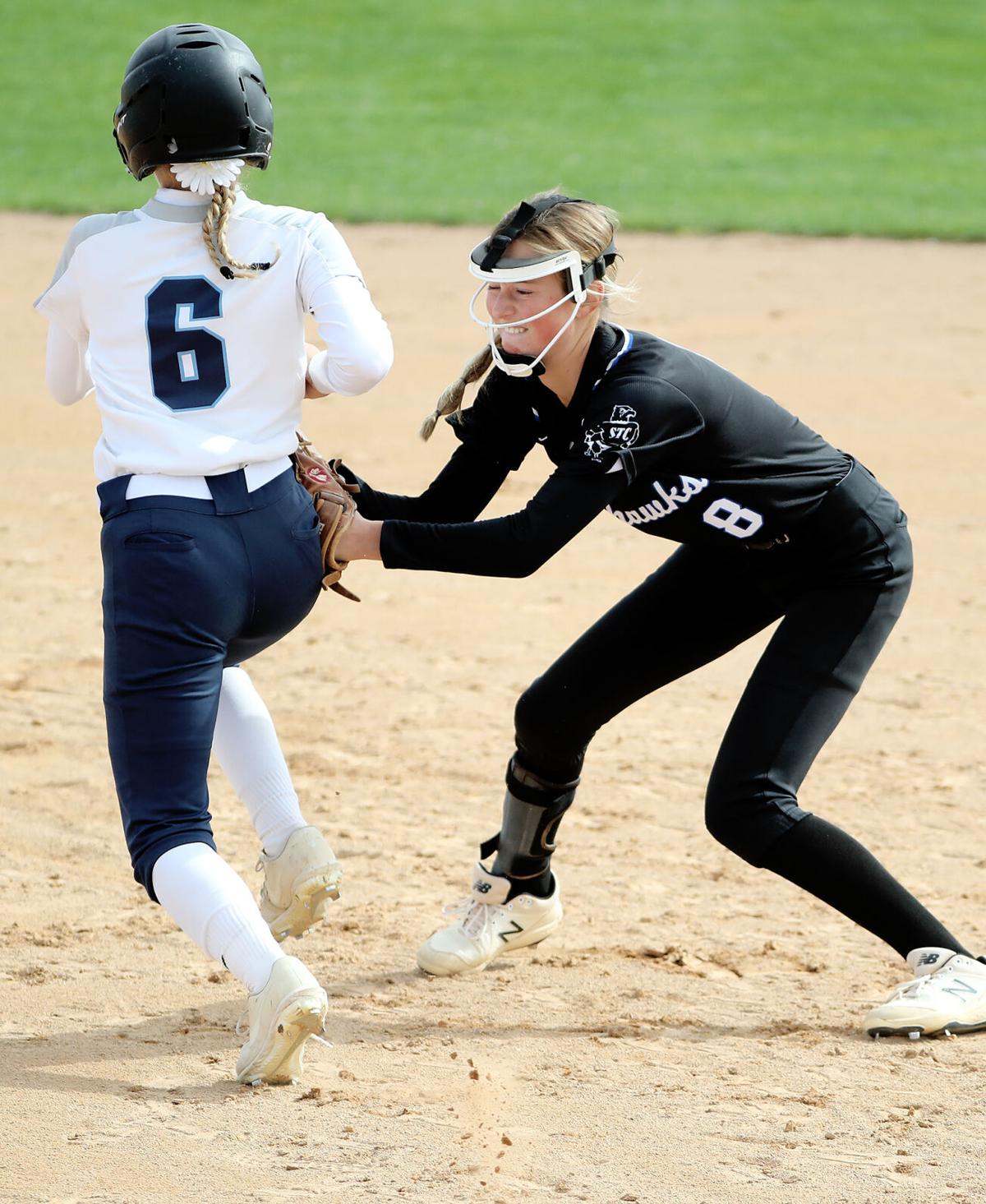 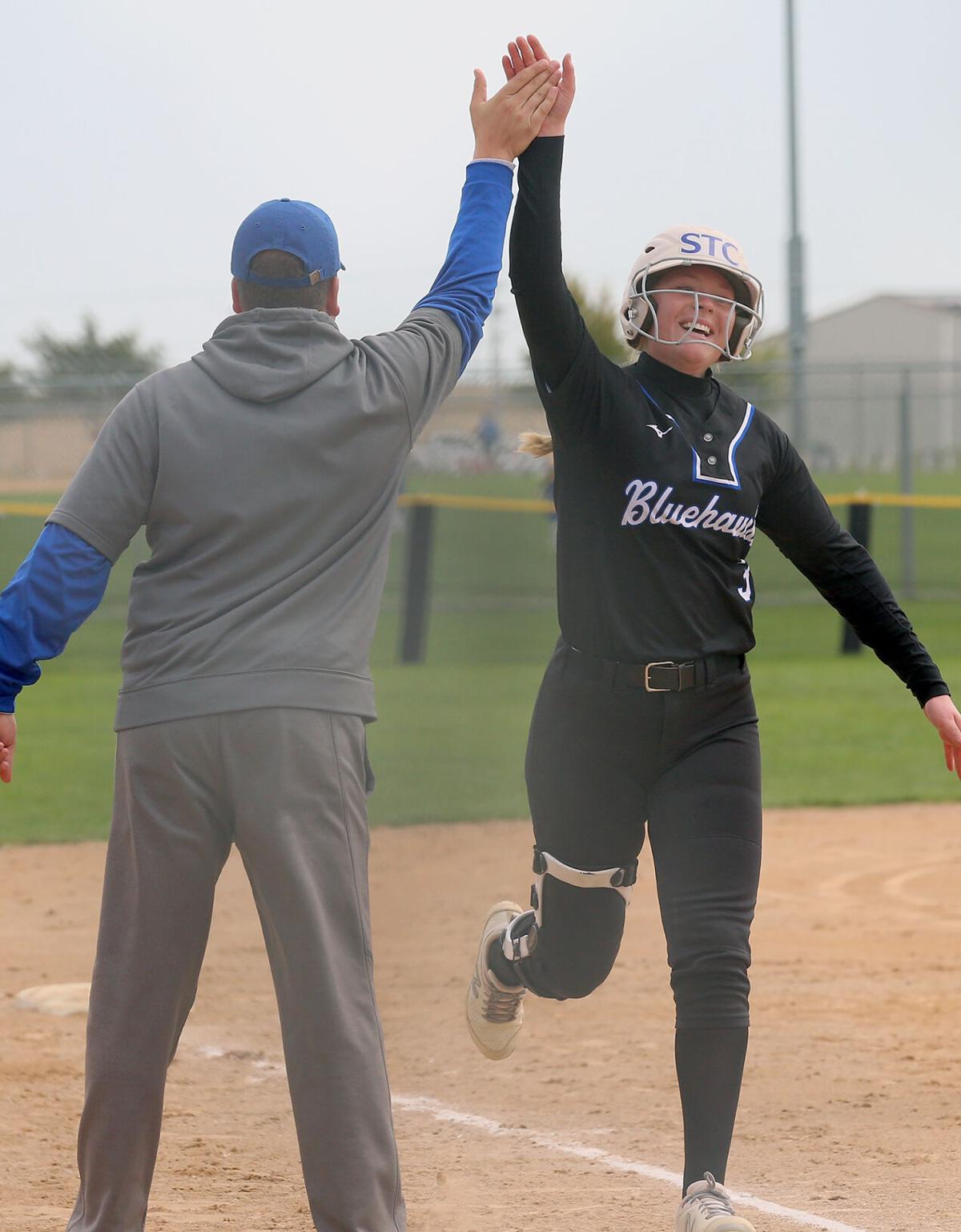 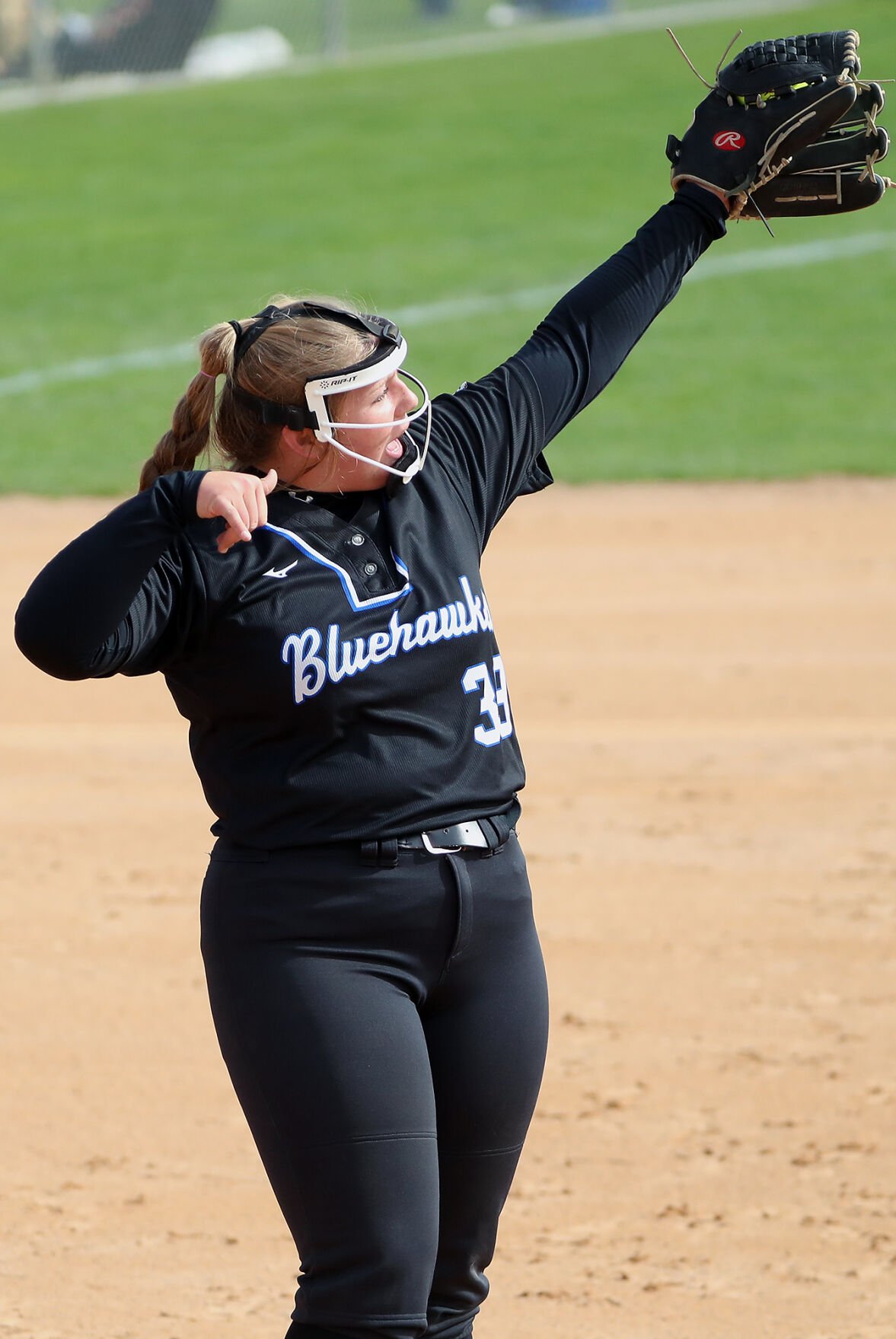 HASTINGS – Hastings St. Cecilia got the monkey off its back.

The Hawkettes saw a six-run lead shrink to one only to explode for eight runs to defeat Freeman 14-5 in five innings in a Class C state tournament elimination game Thursday.

St. Cecilia earned its first win in six tries at the state tournament. But it couldn’t get win No. 2 and saw its own rally fall short in a 12-11 slugfest against Freeman.

“We were trying to get that first win in the state tournament for a long time,” Hawkettes coach Ryan Ohnoutka said. “We got the bats rolling in the first game, and that was big momentum for us. Then I felt we played loose in this second game, and it just allowed us to relax a bit and not have so much pressure on us.

“We gave Malcolm all they wanted, and that’s a good softball team. That’s the best defensive team I’ve ever seen in Class C softball.”

In its first elimination game of the day, No. 2-rated St. Cecilia raced out to a 6-0 lead over No. 6 Freeman after three innings.

The Falcons stormed back with five runs in the top of the fifth and stranded the tying run at first base.

The Hawkettes responded with an 8-spot in the bottom of the frame to end the game via the 8-run rule. Tayelor Butler started things off with a two-run homer and Kiersten Kober finished it with a grand slam after Freeman intentionally walked Shaye Butler to load the bases.

“That’s a credit to our girls,” Ohnoutka said. “They’re so resilient, and our schedule prepared us for this moment. We played some tough teams in Class B, and our dugout’s the loudest dugout in the state no matter if we’re down six runs or up six runs. That’s just a credit to our girls and how much they care about each other.”

No. 7 Malcolm took a 10-3 lead over the Hawkettes after three innings in their elimination game. But St. Cecilia came storming back with eight runs over the fourth and fifth innings to close within 13-11.

Olivia Kvols brought the Hawkettes within one with an RBI double with one out in the top of the seventh, but the tying run was stranded at third.

“About the middle part of that game when it was going back-and-forth, you just look around at how many people are watching the game and you’re proud of the girls that they get to play in an opportunity like this in front of hundreds of people,” Ohnoutka said. “That’s just the word that I’ll say – I’m extremely proud of this group.”

The loss marked the end of the careers for five seniors – Kober, Tayelor Butler, Kvols, Bailey Kissinger and Shaye Butler – who helped start the program when they were freshmen.

“They’ve played in every single softball game that we’ve ever had in the four years, and they’ve put a lot of time into it,” an emotional Ohnoutka said. “You hope that you can go out with a championship. A lot of teams aren’t able to do that, but these girls are outstanding in their character and how they carry themselves in this school, in the classroom, and I’m really going to miss them. This whole softball program’s going to miss them. The last four years have been a lot of fun.”

Nebraska Christian advances to next round, defeats Arcadia-Loup City

The Islanders are the No. 11 seed in Class A, which was determined by a coin flip with No. 12 seed Lincoln East.

An early break, a lucky bounce or a big play could loom especially large when Nebraska Christian takes on Arcadia-Loup City Thursday in the fi…

All four city volleyball teams hit the road on Tuesday with Northwest and GICC coming back with wins and GISH splitting in HAC tournament play.

Nebraska Christian's Hannah Swanson had a pretty fun day while competing at the state cross country meet on Friday.

With the success Bonifas has had this season, he is currently No. 2 behind two-time champion Carson Noecker of Hartington/Newcastle.

“I’ve been in that situation before and it really does suck,” Brandon Schutt said of his decision to help a fellow runner to the finish line.

The top two seeds in the Class C-1, Subdistrict 9 tournament came out and took care of business on the opening night.

Hastings St. Cecilia's Shaye Butler celebates a home run against Freeman in the Class C softball state tournament Thursday morning in Hastings. St. Cecilia won the game but later lost to Malcolm and is eliminated from the state. (Independent/Josh Salmon)