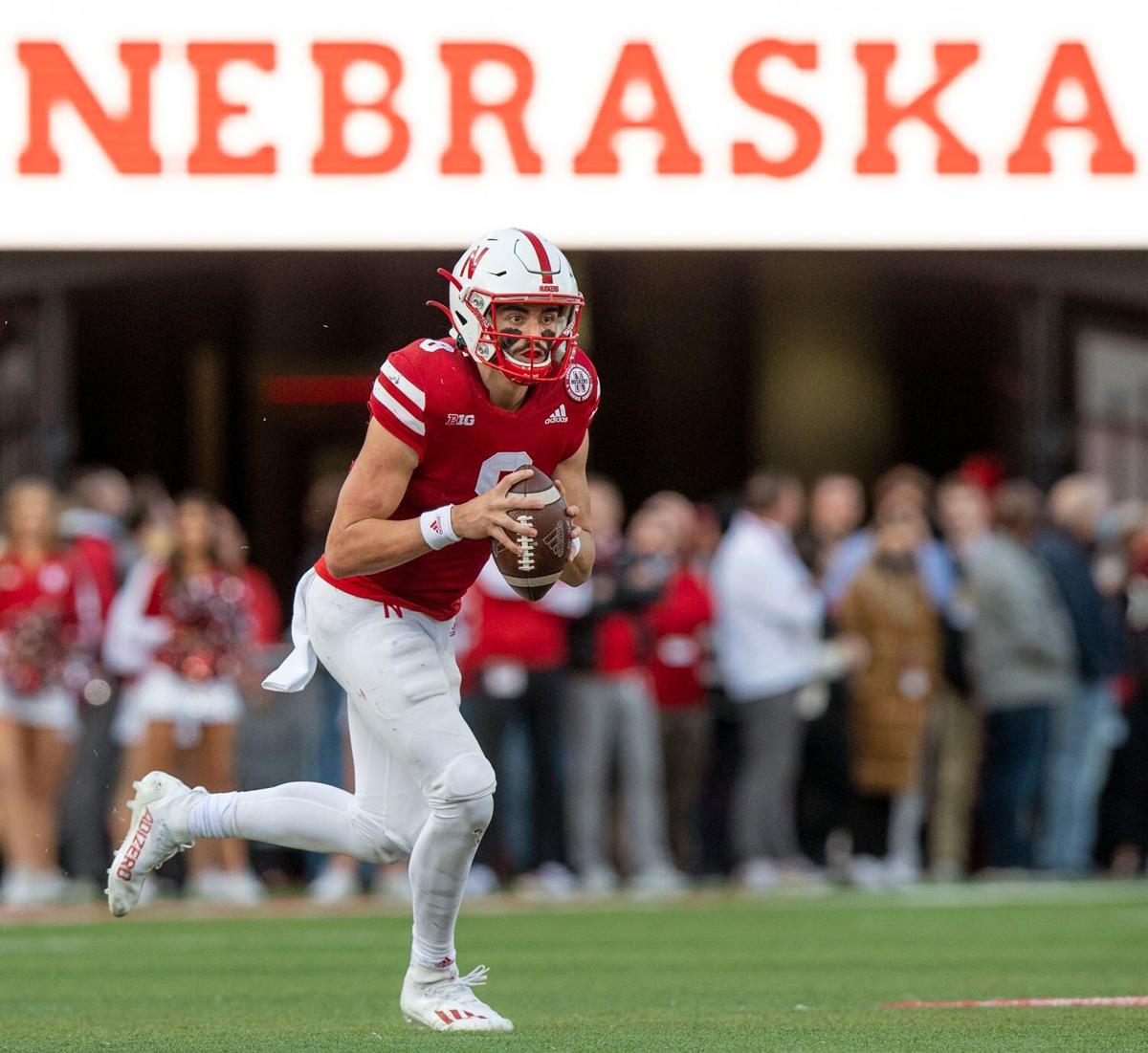 Nebraska quarterback Logan Smothers rolls out looking for a receiver late in the fourth quarter against Iowa on Friday at Memorial Stadium. 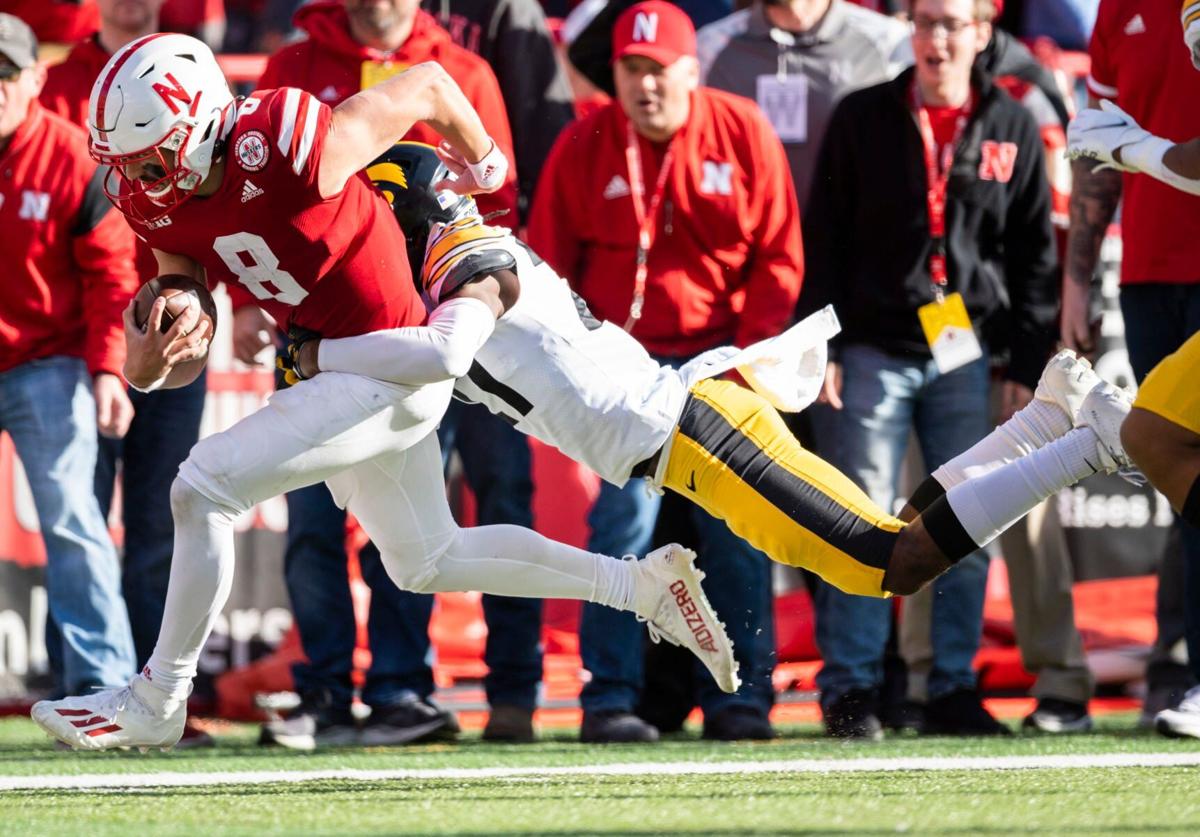 Scott Frost's message to Logan Smothers was the same as it would be to any Nebraska quarterback.

"Go out there and make plays, and don't turn the ball over," the Nebraska football coach said Friday.

Then Smothers, in his first career start, in Nebraska's rivalry game for the Heroes Trophy, went out and did just that for the first 40 minutes of the game.

Steven M. Sipple: It all feels far too predictable as Nebraska falters late in season finale

The Muscle Shoals, Alabama, native orchestrated NU's offense like Lynyrd Skynyrd sang about his hometown — with precision, and ready to provide a memorable performance that would be talked about for years to come.

"This is what I've dreamed of my whole life, you know?" Smothers said afterward. "What more can you ask for, playing here at home against Iowa?"

The storybook was being written as Smothers confidently stepped up and hit receiver Samori Toure in stride on Nebraska's first play of the game. The chapters added up as he led touchdown drives of 75, 75 and 94 yards against one of the nation's top defenses.

"I think he played really well. Surprised me with his confidence. Because most freshman quarterbacks, they won’t come in with confidence. They’ll be nervous, especially in a big game like this," Toure said. "But he handled the whole week of preparation really well, and he came out today with confidence, and I’m proud of the kid."

Nebraska's continued insistence on shooting off its own feet eventually won out over Smothers' attempts to write history. The freshman fumbled near midfield to set Iowa up with good field position early in the fourth quarter.

Though the Hawkeyes didn't score on the ensuing drive, a punt that was fair caught on the 7-yard line eventually led to an intentional grounding call and a safety.

Smothers finished 16-for-22 for 198 yards, throwing an interception on NU's final play of the game after a miscommunication with receiver Levi Falck. The quarterback carried the ball 24 times for 64 yards and two scores.

"I think Logan played a really good game for the circumstances he was in. I guess you could say a couple bad choices here and there, putting the ball on the ground and stuff like that," NU running back Brody Belt said. "But Logan stepped in, he knew the game plan really well, he knew what he had to do today, and I think he played really well."

Smothers prepared like a "professional," said tight end Chancellor Brewington, after Smothers learned on Sunday he would be the starter after Adrian Martinez's season-ending shoulder surgery.

After a week of buildup, Smothers trotted onto the field and completed his first seven passes for 125 yards while piloting Nebraska to a 21-6 lead.

"I think that’s a true testament to someone who’s just stayed faithful throughout the whole process, and just knowing his role and making sure that he’s been locked in the whole year," said Brewington, who delivered a pair of crushing blocks on Smothers' scoring runs. "Because we ran stuff that we put in Week 1, and you have to be dialed in. So, man, I’m proud of him, especially being a younger guy, but he doesn’t act like it."

In the end, like so many of Nebraska's players in this unbelievable season of finding ways to lose, Smothers largely did his job before the team as a collective came up short.

"He did enough for us to win," Frost said.

Photos: Check out the sights from Nebraska and Iowa's latest Black Friday clash

Busy recruiting weekend on tap for Huskers: See who's set to visit NU and who's not

Check out Nebraska's official visitor list as the holiday recruiting dead period comes to an end.

"Every school that I've gone to, I've gotten a 'Go Big Red' as soon as I walked in," Bryan Applewhite says of life on the recruiting trail.

Nebraska veteran inside linebacker Will Honas will attempt to play his seventh year of college football elsewhere.

The former Nebraska QB revisited some Husker memories (some good, some bad) when previewing his first playoff game as an NFL head coach.

Johnson, listed at 6-foot-2 and 180 pounds, is one of the top-rated quarterbacks in the Midwest for the 2023 cycle.

Current defensive coordinator Erik Chinander made $800,000 in 2021 and could earn a raise that would match or approach Whipple's salary.

Several players have entered Nebraska's 2023 picture at quarterback, and we take a look at some of those prospects along with a preview of junior day.

Decoldest Crawford on radio: Husker receivers coach Joseph 'is going to keep it real with you'

Chinander has overseen a Blackshirt defense that has steadily improved since he arrived in Lincoln with head coach Scott Frost in December 2017.

Nebraska quarterback Logan Smothers rolls out looking for a receiver late in the fourth quarter against Iowa on Friday at Memorial Stadium.