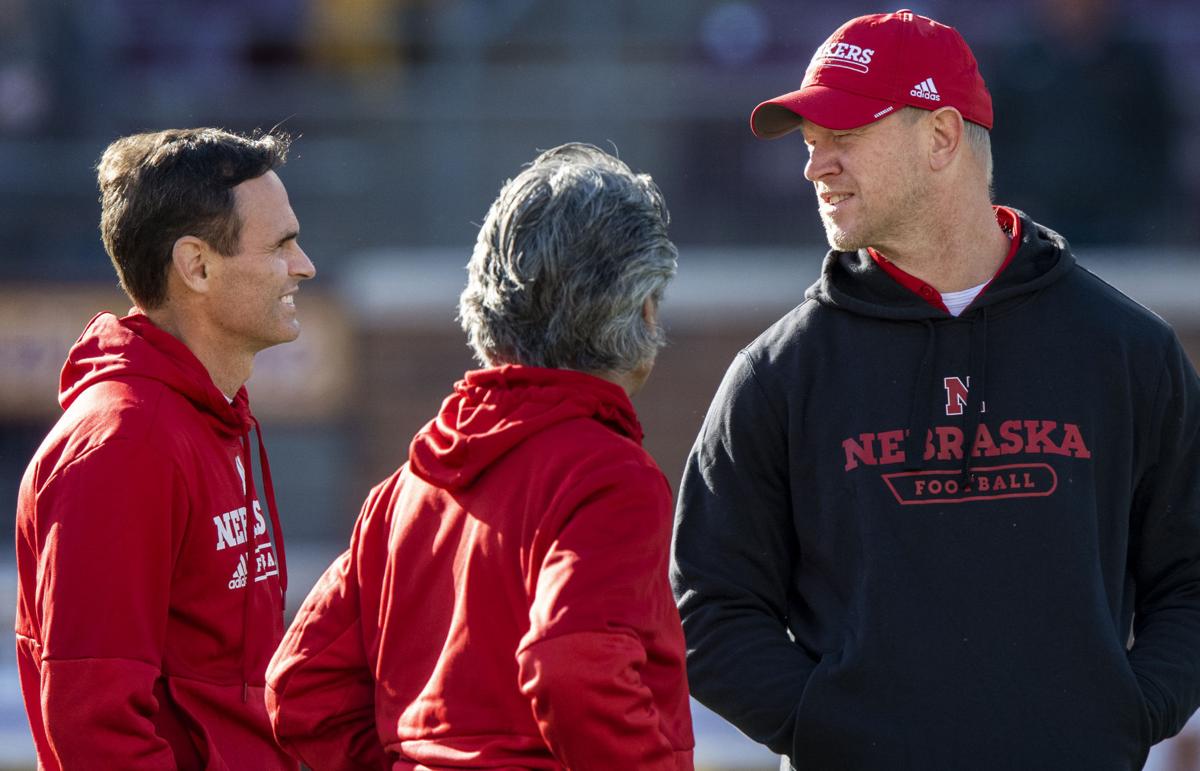 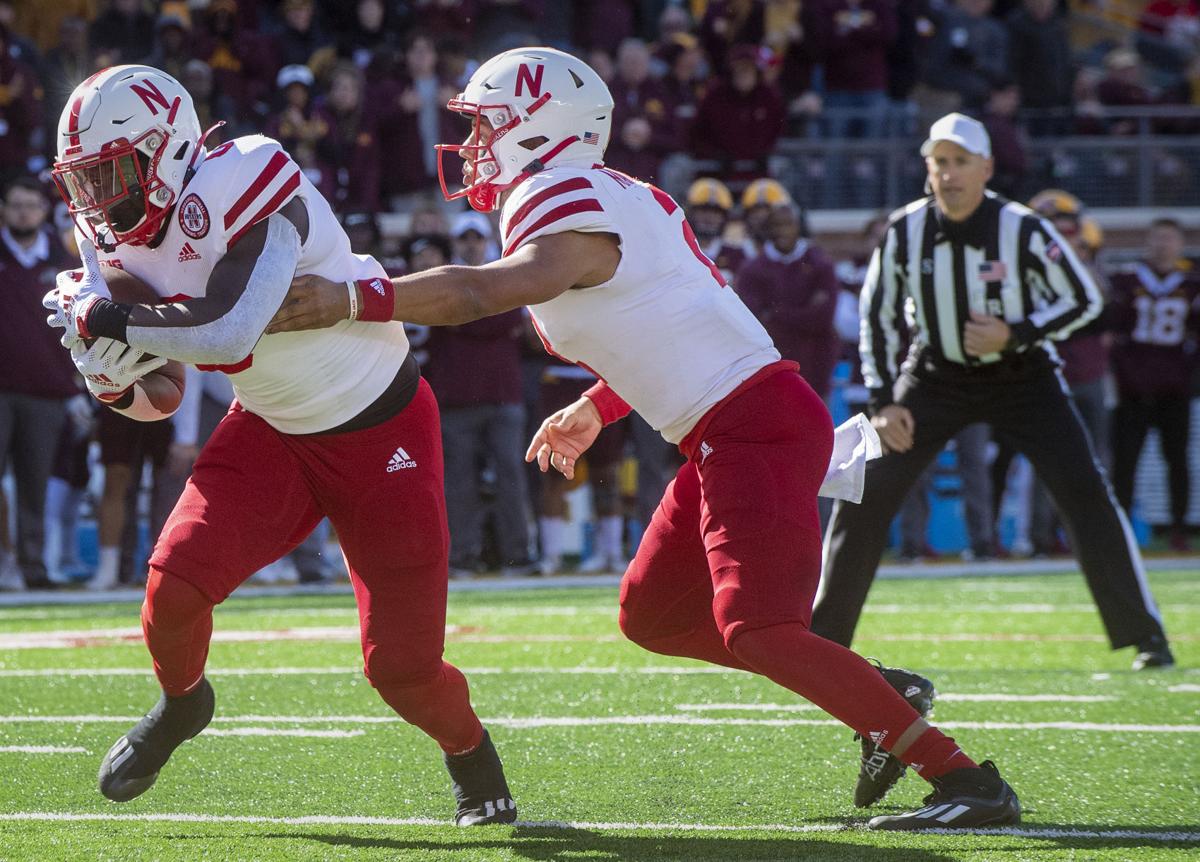 Nebraska quarterback Adrian Martinez (right) hands the ball off to Husker running back Jaquez Yant (0) before he gets stopped before the goal line by Minnesota's Tyler Nubin on a fourth down in the third quarter Saturday at Huntington Bank Stadium in Minneapolis.

Nebraska head coach Scott Frost on Wednesday said that he and the offensive staff had to adjust the plan for the run game on Saturday in a 30-23 loss to Minnesota because of junior quarterback Adrian Martinez’s health.

Martinez had taken a hard shot to the jaw on Sept. 25 against Michigan State and also is dealing with some kind of lower-body injury, as well.

“We took it into account before the game,” Frost said. “Some of the option stuff and quarterback run stuff that we might have added to the game plan just wasn’t going to be available to us. We’ve got to play better around him, and I’ve said that a bunch. We lead the Big Ten in sacks and that’s got to get better. He’s got to trust protection a little bit better.”

Martinez has started all eight games for Nebraska and threw for 241 yards and a touchdown against the Gophers, but he also finished with eight carries for minus-17 yards. Take away two sacks, and the Fresno, California, native had six carries for 2 yards. NU did run several option plays and Martinez carried the ball at the goal line on third-and-goal in the third quarter before Jaquez Yant tripped at the goal line on fourth down.

After averaging 4.6 scrambles on designed passing plays over Nebraska’s first five weeks according to Journal Star stats, Martinez has scrambled just one time in the past three games, a key 20-yarder in the third quarter against Michigan to pick up a first down on third-and-11.

Frost did have positive news about Martinez, though.

“He came out of the game clean, so he’s going to be as healthy as he’s been in several weeks on a week from Saturday,” Frost said.

Williams’ injury 'minor:' Sixth-year safety Deontai Williams avoided serious injury to his left knee on Saturday after his fourth interception of the year.

Frost termed it “minor” on Wednesday, but did suggest that Williams is unlikely to play against Purdue next weekend.

“He’s going to be day-to-day, week-to-week,” Frost said. “He’ll probably be out for a little bit, but he’ll definitely be back this year.”

In Williams’ absence, redshirt freshman Myles Farmer will step into a starting role and Frost said there are several candidates to get into the rotation behind Farmer and Marquel Dismuke.

“I just love the kid, first and foremost,” Frost said of Williams. “He’s a leader, he’s tough. He can play the run, play the pass. We feel good about our young guys behind him, so we’ll miss him, but I know he’ll help those guys get ready.”

Johnson in 'protocol': Also on the injury front, redshirt freshman running back Rahmir Johnson was in meetings and around the team this week after suffering an apparent head injury Saturday against Minnesota.

“Rahmir was in meetings and everything,” Frost said. “He’s got to pass protocols to get back into play, but we feel good about it.”

Talent isn’t enough: The coach was asked a question about freshman receiver Zavier Betts’ playing time and production. Betts has played in the Huskers’ receiving rotation and against Minnesota had a 27-yard reception and a 27-yard run, plus a key third-down conversion as his three touches, but he has dropped out of the rotation or seen limited reps in key situations at times this year, too.

Frost gave a general answer but tied Betts to it as well.

“We’ve got some guys that are really talented that I wish were out there more,” Frost said. “I’m not talking about one specific guy, but some of the guys that I wish were out there more just miss too much time. They’ve missed reps. You start playing at a high level, particularly in this league, when you get a lot of repetition and you get a lot of experience. Then the coaches know and the team knows that you can count on those guys in key situations. So some of them get their chance and go in and bust an assignment and it’s tough to keep guys on the field when that happens. But you’ve got to be practicing. Every time, you’ve got to get the reps, you’ve got to build up that experience.

“Zavier’s come a long way. He needs more of those reps so that we can rely on him every play, and he knows that.”

Frost said there is “no substitute” for time on the practice field.

A light work week: Nebraska practiced Tuesday and Wednesday this week and then has the rest of the week off. Because the Huskers played Week 0, they have to work in extra off-days over their two bye weeks.

“We have a unique bye week because of playing Week 0, we had to have seven days off between our first bye week and second,” Frost said. “We’re only going to practice twice this week. Practiced yesterday and today. Going to try to get the guys back early and get some game-planning ready and then have pretty much a normal week for Purdue. I think the next bye week we’ll practice three times. But that’s how many days we’ve had to have off.”

MLB lockout: What you need to know

Parker Gabriel and Chris Basnett break down Huskers-Gophers, and field your questions

Nebraska quarterback Adrian Martinez (right) hands the ball off to Husker running back Jaquez Yant (0) before he gets stopped before the goal line by Minnesota's Tyler Nubin on a fourth down in the third quarter Saturday at Huntington Bank Stadium in Minneapolis.