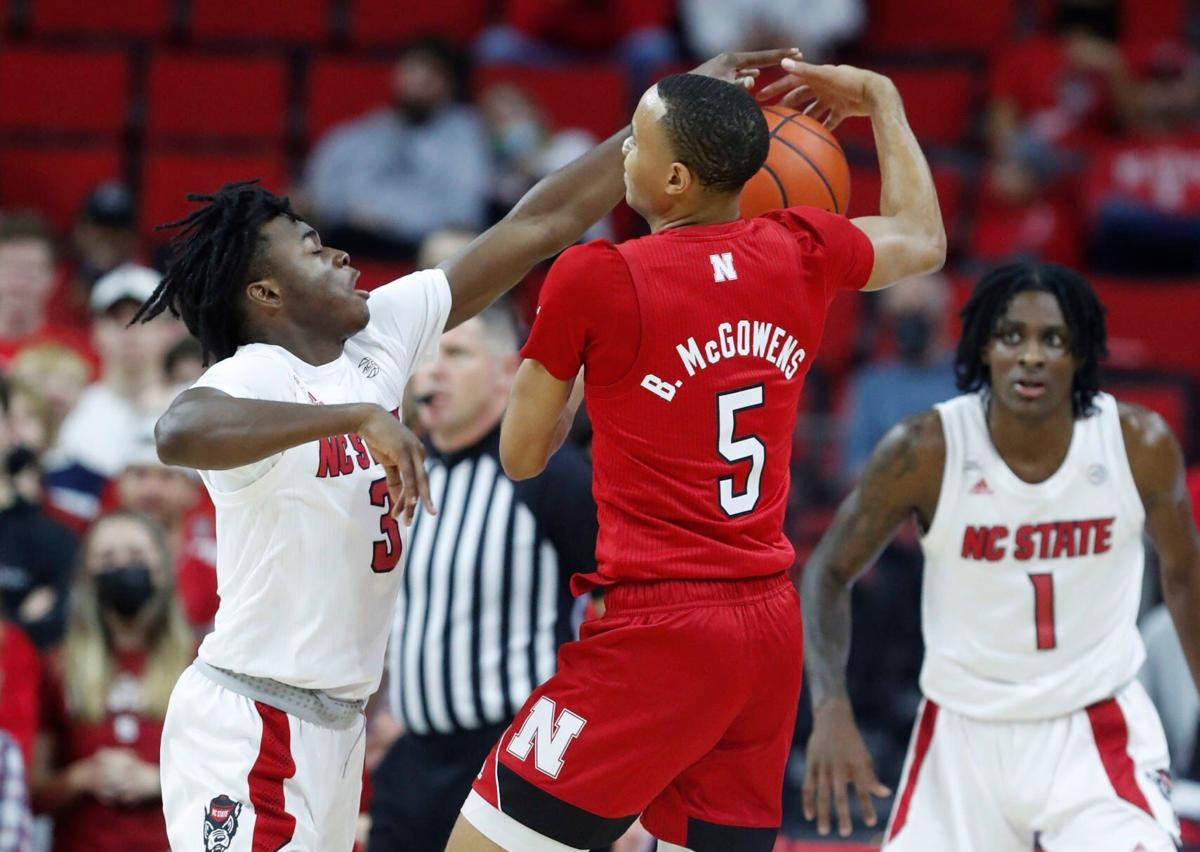 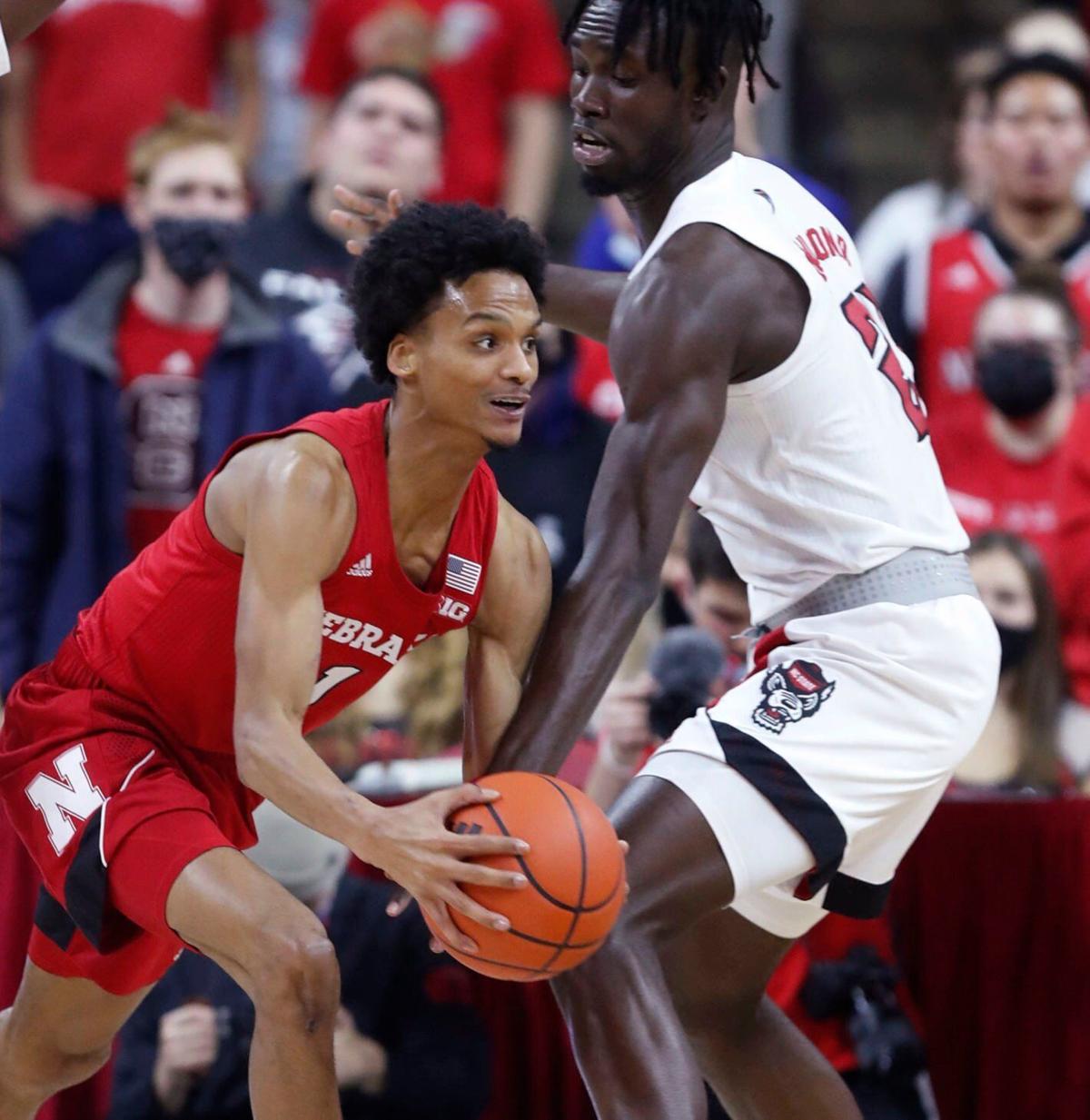 Nebraska's Alonzo Verge (1) gets around the pressure by NC State's Ebenezer Dowuona (21) during the first half Wednesday.

There are plenty of ways to win and lose basketball games, and Nebraska has experienced just about all of them.

Heck, the Huskers might have experienced just about all of them Wednesday night.

From trailing by nine points early to leading by 14 late to playing 60 game minutes of basketball stretched out over three hours, Nebraska fell to North Carolina State 104-100 in quadruple, yes, quadruple overtime in Raleigh, North Carolina.

Husker hoops ready to take show on the road, seeking to reverse fortunes away from Lincoln

It was the second quadruple-overtime game in Nebraska history, with the first coming Dec. 22, 1979, against UAB.

Dereon Seabron scored 39 points and pulled down 18 rebounds for the Wolfpack, finishing 17-of-20 at the free-throw line while the Huskers were 11-for-15 at the stripe as a team.

NC State finished 32-for-42 at the free-throw line overall.

The free-throw disparity was just one of what felt like a hundred storylines in a contest that saw Nebraska (5-3) rally from a nine-point, first-half deficit to lead by one at halftime, and extend that advantage to 14 with 9:51 left after a Kobe Webster jumper.

From there, all hell broke loose.

“A lot of adversity out there,” NU coach Fred Hoiberg said on his postgame radio show on the Husker Sports Network. “I thought Alonzo had a great take to the basket there right before that first overtime. Unfortunately, we didn’t get the call. And we had several chances to win it, just couldn’t capitalize.”

Nebraska’s best chance, perhaps, came before the game even got to extra time.

After Seabron made one of two free throws to tie the game at 70 with 7.2 left, Alonzo Verge attacked the basket on the other end.

Replays showed Verge was clearly hit on the arm as he went up for the layup, but a whistle never came from the officiating crew of Ted Valentine, Bill Covington Jr. and Tony Henderson.

Last play of regulation.
Looks 100% clean.
Except for the part where Alonzo Verge had his arm hacked. pic.twitter.com/bjTpWfLVu3

A livid Hoiberg was nearly out to half-court as the teams went to their benches to prepare for overtime.

“We just continued to go at it, show resiliency, go at it, keep fighting,” Hoiberg said. “Had a couple things go against us there that I can’t talk about, unfortunately, but just a really gutty performance by our guys.”

Still, Nebraska had blown a 14-point lead. The Huskers held a lead in each of the first three overtimes, too.

In the first extra period, Verge, who finished with 25 points, 10 rebounds, and eight assists, made a layup with 18 seconds to go put NU up 74-72. Seabron, though, made a pair of free throws with six seconds left to send it to a second overtime.

In that second extra period, Nebraska led 85-80 with 1:44 left and managed just one point the rest of the period as NC State rallied again to go ahead 86-85 on Seabron’s layup with 4.6 seconds to go.

After a timeout, Nebraska got the ball to freshman Bryce McGowens, who was fouled 80 feet from the basket. An 86% free-throw shooter coming in, McGowens calmly drained the first. His second was a third of the way down before popping back out, and NC State nearly threw in a three-quarter-court shot before the game went to a third extra period.

McGowens played 58 of a possible 60 minutes, scoring 24 points to go with nine rebounds.

In the third overtime, Nebraska once again took a two-possession lead, going up 90-86 with 3:09 to play on C.J. Wilcher’s only bucket of the game.

The Huskers scored just two points the rest of the period as NC State’s Ebenezer Dowuona’s layup with five seconds left sent the game to overtime No. 4.

The Wolfpack (6-1) led the whole way in the fourth overtime, closing it out with a free throw from former Husker Thomas Allen.

We haven’t even gotten to the near-fight and multiple ejections yet.

With about six minutes remaining in regulation, NC State’s Jericole Hellems made a three-pointer over Lat Mayen in front of the Wolfpack bench to cap NC State’s 14-0 run that tied the game at 61.

As the teams turned to head up the court, Mayen gave Hellems a forearm shiver that led to both benches emptying.

After everything was sorted out, three Huskers — Mayen, Eduardo Andre, and Oleg Kojenets — were ejected, as was NC State’s Cam Hayes.

From there the teams traded figurative punches in a contest that lasted approximately 3 hours, 20 minutes.

Nebraska will now have to find its legs again before traveling Saturday to Indiana to take on the Hoosiers in a game that tips at 11 a.m.

“We’ve got to learn from what we didn’t do well," Hoiberg said. "And again, I thought we made plays, we just didn’t capitalize on it at the end there. And guys were exhausted. They left their hearts out there on the floor.” 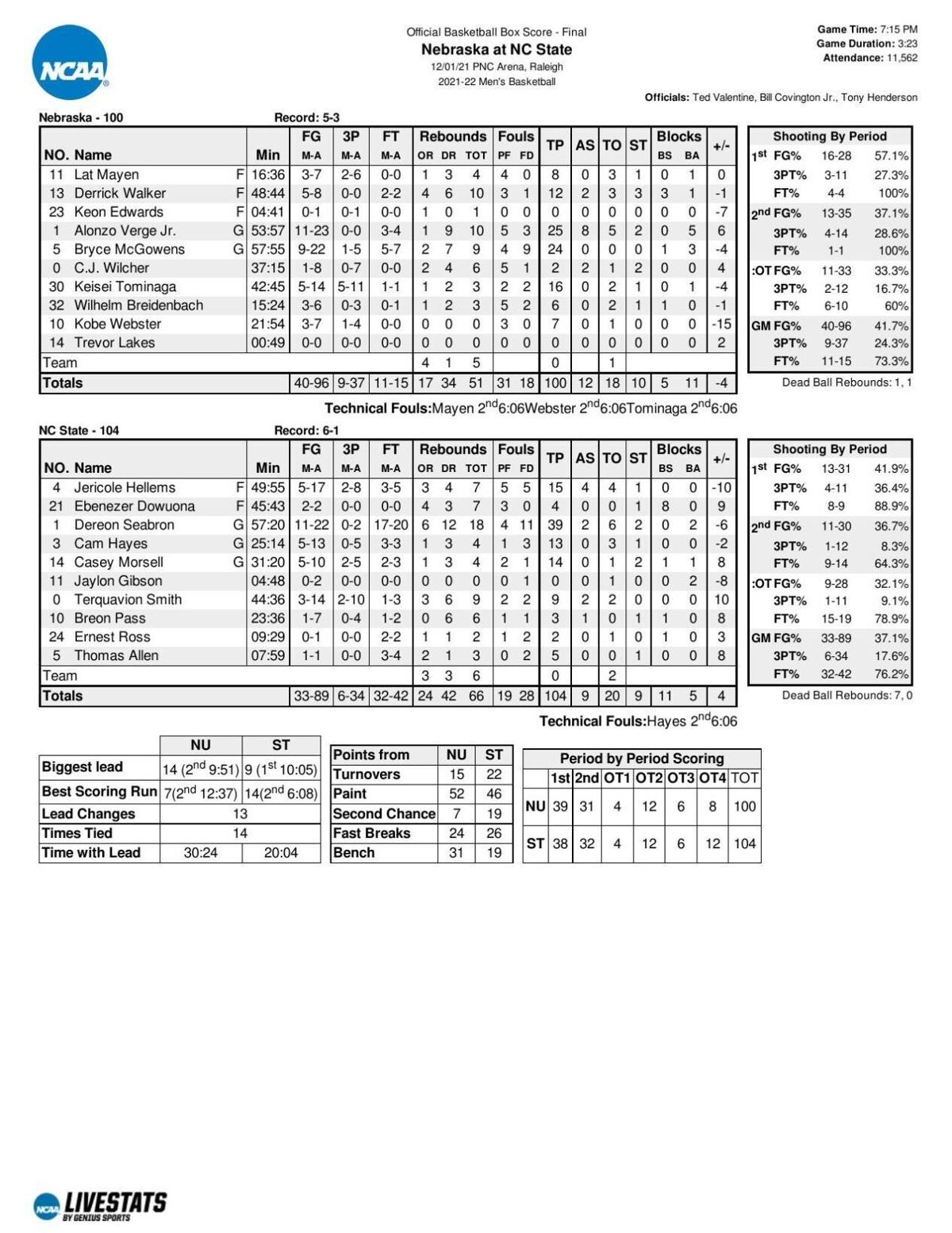 Innovative insulation unveiled for Team USA ahead of Winter Olympics

'You've got to capitalize:' Trey McGowens returns, but Huskers can't get past Hoosier hurdle

Indiana never trailed, but Nebraska was never out of it. In the end, Fred Hoiberg's crew couldn't get over the hump in a sixth straight loss.

The Nebraska veteran guard spoke about player accountability during an hourlong radio appearance, which led to a chat between player and coach.

Nebraska currently has fewer than seven scholarship players available, which is the Big Ten minimum for a team to play a game.

The Nebraska men's basketball team appears to have a little bit more time to recover from its COVID-19 issues than it originally thought.

The Nebraska men's basketball game originally scheduled for Tuesday has been moved to Thursday at 4 p.m., the school announced Saturday.

The "break" in the Nebraska men's basketball team's January schedule arrives Monday. That break includes playing one of the best big men in the country.

There's a decent argument to be made that McGowens could have been the difference in at least a few of NU's close losses over the past two months.

What's the 'bottom line' for Fred Hoiberg and the Huskers as they gear up for Big Ten road trip?

If the Nebraska men's basketball team truly feels that it has made progress, the next few days could show how far that belief stretches.

Nebraska's Alonzo Verge (1) gets around the pressure by NC State's Ebenezer Dowuona (21) during the first half Wednesday.