It probably speaks to the level of talent that Bryce McGowens possesses that he can put together the stat line he did Saturday and still not be the top story from Nebraska's 83-70 win over South Dakota.

The five-star freshman finished with 22 points, eight rebounds, four assists, a steal and a blocked shot against the Coyotes, and largely made it look like a routine afternoon at the office.

The increased playmaking role has come both as McGowens has grown more comfortable in the college game and after his older brother Trey went down with a broken foot nearly two weeks ago against Creighton.

Since that game, the younger McGowens is averaging 16 points per game on 49% shooting while going 25-for-28 at the free-throw line. He's pulling down eight rebounds per game, and has 15 of his 16 assists on the season over Nebraska's last four contests while playing 27, 31, 31, and 33 minutes.

"Having everybody else around me that can make shots, everybody can do that a lot on this team," McGowens said of taking on more of a playmaking role. "So I feel comfortable knowing that the next player is going to make a play out of the play I made. I'm feeling real comfortable."

Mr. Reliable: Derrick Walker quietly went about his business once again Saturday, going 6-for-7 from the field to score 13 points while pulling down five rebounds.

The Nebraska junior forward made his first shot against South Dakota, giving him 15 consecutive made field goals dating to Nov. 21. That tied the program record set by Ade Dagunduro in 2008.

Walker has four-straight double-figure scoring games. He had three such games in his career prior to this season. He's given the Huskers a reliable option when NU needs a basket, including a post move and a score to open the second half Saturday.

"Derrick gets us baskets when we need them. And he's doing a great job rolling to the rim," NU coach Fred Hoiberg said. "So he's just a big presence for us out there when we need baskets. And when we're not hitting shots, we need somebody to score it at the rim, and Derrick's been doing that for us."

Over his past four games, Walker is an astounding 25-for-27 from the field.

Ball control: When Nebraska goes to its bench, the Huskers are finding they won't have to worry much about giving the ball away.

Kobe Webster and Keisei Tominaga have combined to play 207 minutes this season — and the duo has combined to turn the ball over exactly once.

The lone giveaway belongs to Webster, against Tennessee State. Since entering the rotation two weeks ago against Creighton, Webster has played 111 minutes with 12 assists and one turnover. Tominaga has played 96 minutes this season without a turnover, and added his first two assists of the year Saturday.

Schedule update: Nebraska will get an early start to Big Ten play next week.

The Huskers' league opener at Indiana, the first of two Big Ten games NU will play in December, will tip off at 11 a.m. next Saturday.

The contest against the Hoosiers was the only remaining game on Nebraska's schedule without a start time. The matchup will be televised on BTN.

NU will host Michigan at Pinnacle Bank Arena on Dec. 7, with that game beginning at 6 p.m. and being televised on ESPN2. 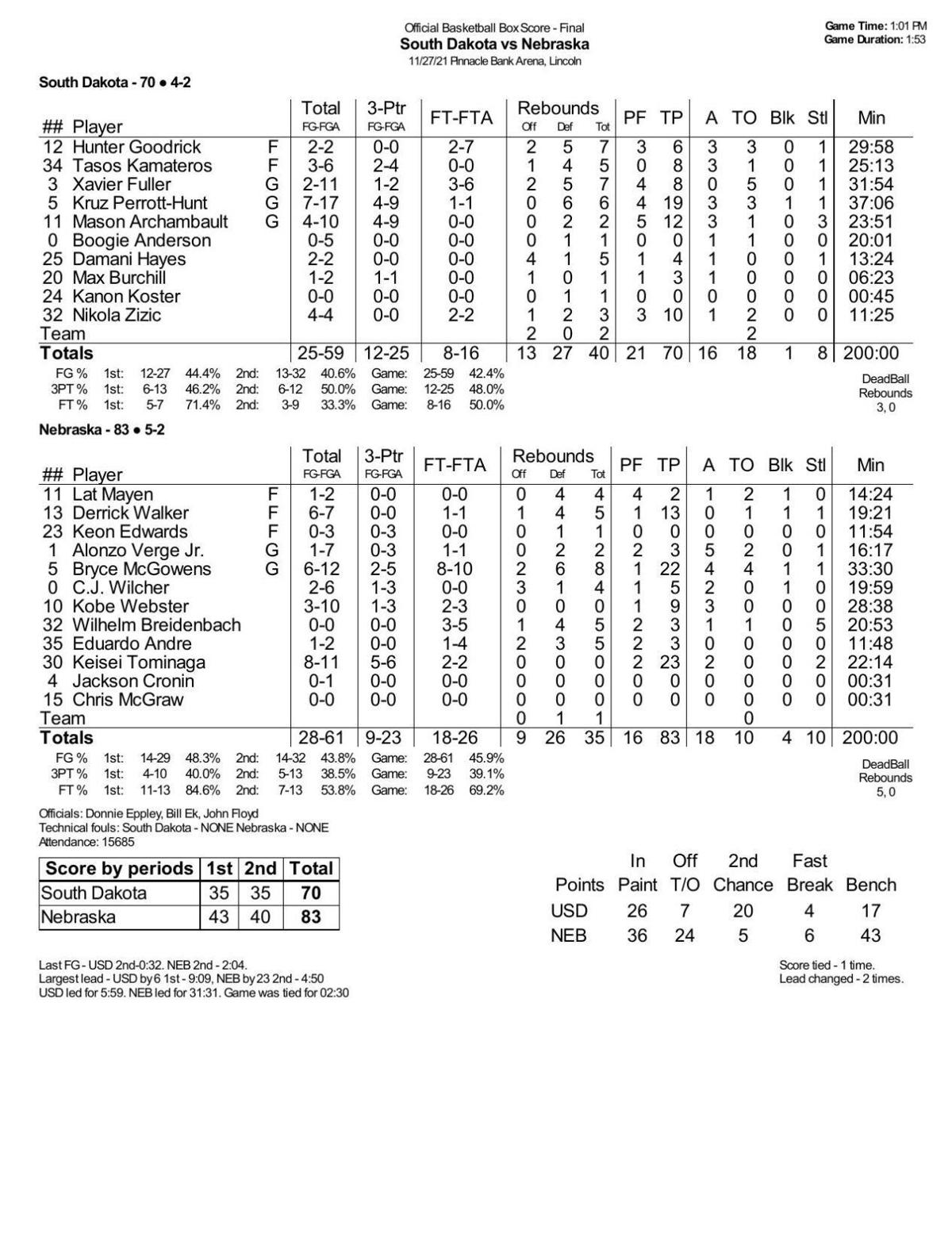 'You've got to capitalize:' Trey McGowens returns, but Huskers can't get past Hoosier hurdle

Indiana never trailed, but Nebraska was never out of it. In the end, Fred Hoiberg's crew couldn't get over the hump in a sixth straight loss.

The return of Trey McGowens is imminent, and not a moment too soon for Husker hoops

Nebraska has sorely missed its leader, who has returned to practice after a leg injury kept him out nearly two months. When will he return to action?

Four minutes, and a few comments, show the gap between Husker hoops and competing in the Big Ten

The route Brad Underwood chose with Illinois is to build with freshmen and keep them in the program, a contrast to Nebraska's transfer-heavy approach.

Extension, hefty buyout, part of Hoiberg contract that was quietly revised in 2020

If the Huskers wanted to move on from Fred Hoiberg, an unannounced contract extension signed by Bill Moos makes Hoiberg's buyout costly.

The final result was an 81-71 Illinois victory that showed once again, when it wants to, Nebraska can play with anyone in the conference.

The "break" in the Nebraska men's basketball team's January schedule arrives Monday. That break includes playing one of the best big men in the country.