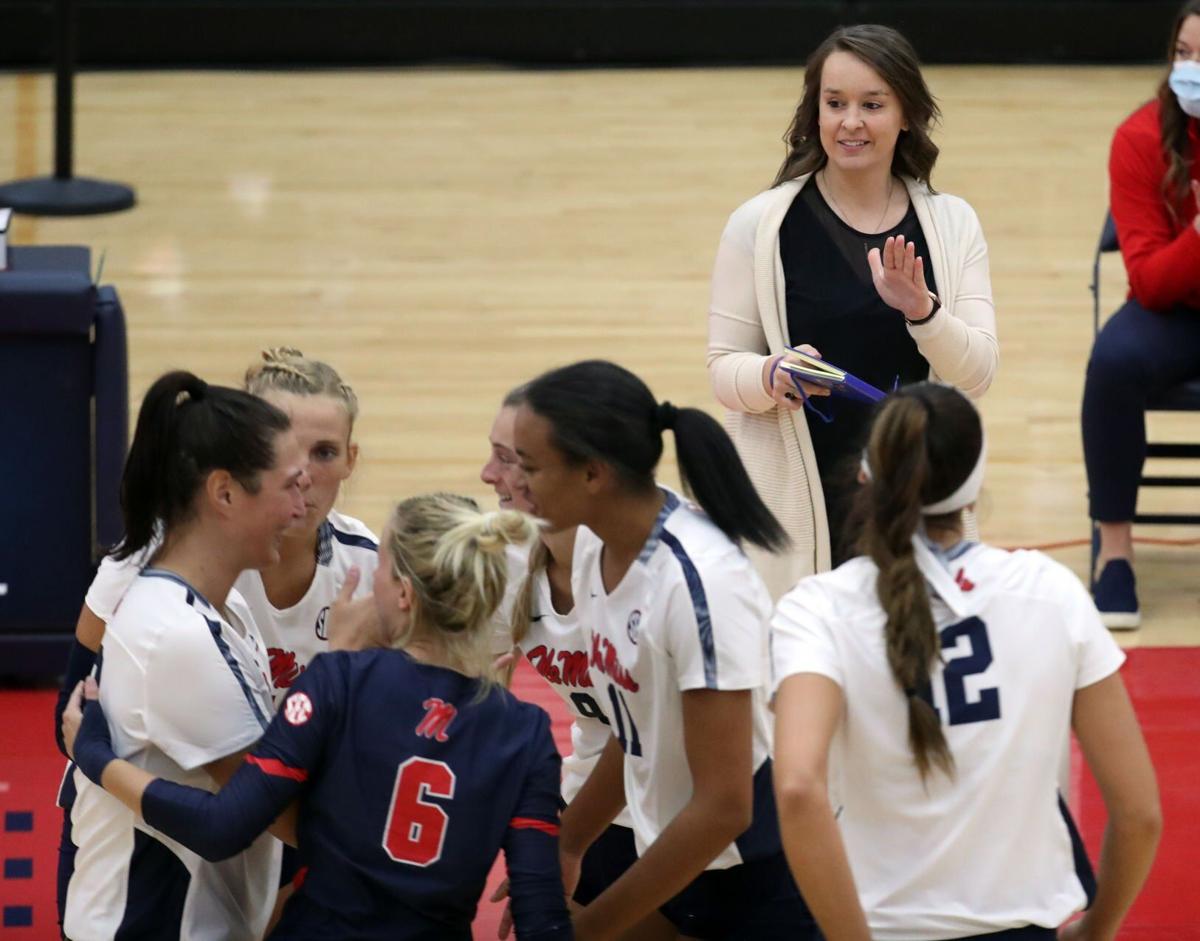 Mississippi coach Kayla Banwarth cheers on her team after a point against Mississippi State on Oct. 17 in Oxford, Mississippi. Banwarth is in her second season running the Rebels' program. 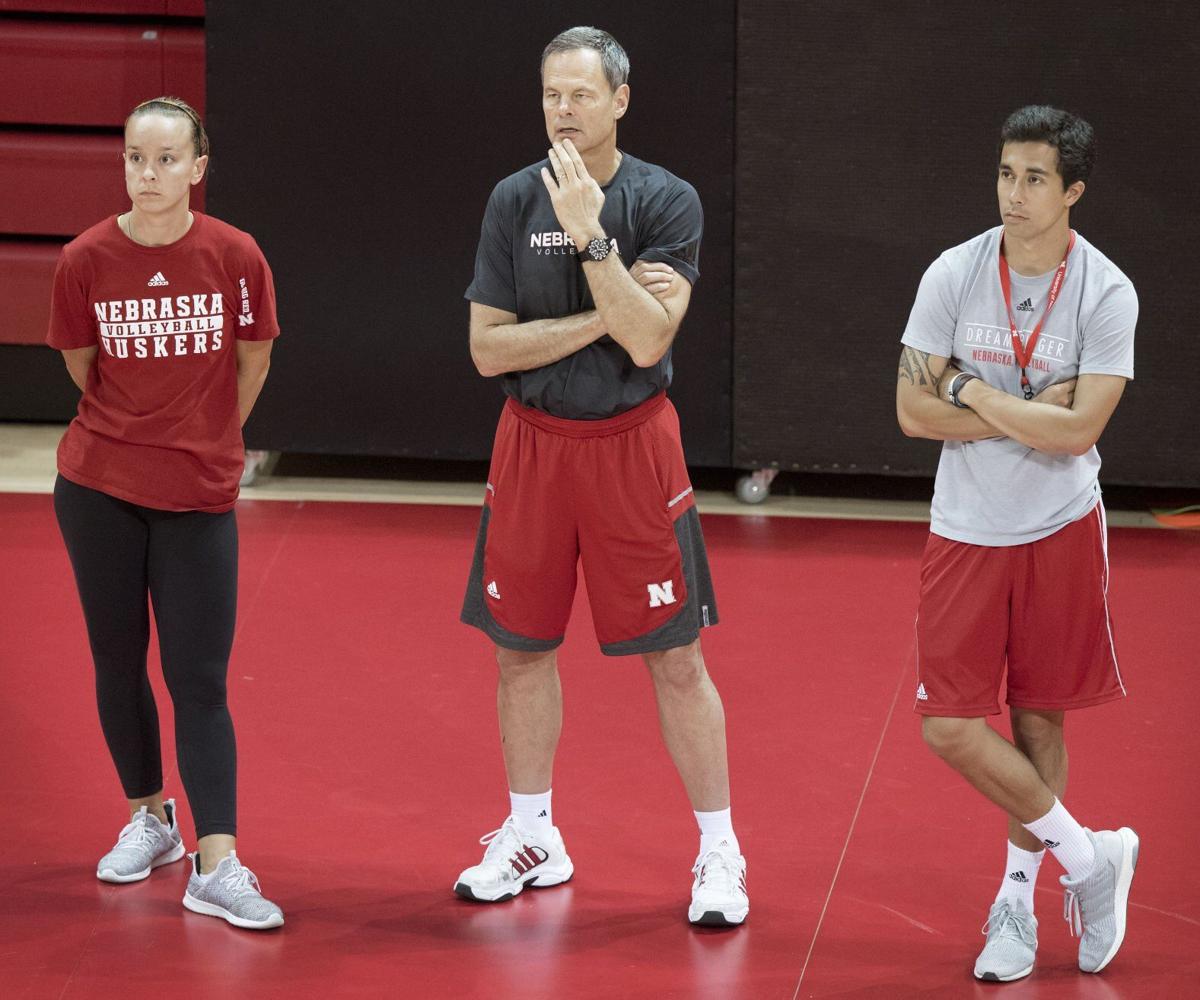 No matter where Kayla Banwarth is in the world, the sport she loves seems to always pull her back to Nebraska.

The Dubuque, Iowa, native was a four-year starting libero for the Huskers, played matches for Team USA in Nebraska and was an assistant coach under John Cook.

And when Banwarth watched the NCAA Tournament selection show on Sunday night, not only was she excited to see her Mississippi team selected to the field, but she immediately spotted the Rebels' first-round destination.

John Cook on the radio: Coach questions three conference champions (and Nebraska) being in same region for NCAA Tournament

Mississippi, following a remarkable 13-month turnaround, will play at Creighton in Thursday's opening round.

"Playing with USA, bringing Ole Miss back to Omaha for the NCAA Tournament, I just keep having these full-circle moments with volleyball continuing to bring me back to Nebraska," Banwarth said ahead of her team's Wednesday practice at D.J. Sokol Arena. "It's pretty cool and a special journey for me."

Special may not be a strong enough word to describe what Banwarth's team has accomplished this year, the former Husker's second season at the helm in Oxford.

The Rebels are 21-8. They were 1-19 in Banwarth's first season. The lone win came in five sets against LSU, and the Rebels were swept eight times.

It was a trying season for the players competing during a pandemic and for a coach who, before 2020, won wherever she played or coached.

"It was really tough," Banwarth said. "Losing a lot is obviously no fun, but then you add COVID on top of it and what the SEC did with the fall-spring hybrid schedule, it made for a really long, really hard season. But in hindsight, I'm really glad we went through that because competing in a really tough SEC conference and losing a lot and getting whipped on forced us to raise our level and forced us to have to adapt and figure out how to compete with really good teams every night."

How did Banwarth and her staff turn it around so quickly?

It was her niche at Nebraska, and it's working at Mississippi.

There are nine new players on this year's team, including four transfers. Liberos Sam Burgio (Maryland) and Riley Fischer (Florida) provided instant help, and then Banwarth wooed Kylee McLaughlin, the Big 12 setter of the year last season at Oklahoma, to come to Ole Miss as a graduate transfer.

"She knows how to win, she's very competitive, she's very driven, and to have that experience this year has been a game-changer," Banwarth said of the all-SEC first-teamer.

The Rebels won their first 12 games of the season and won eight of their final 11 matches to earn an at-large bid for the NCAA Tournament.

Yes, the goal is always to make the NCAA Tournament and everyone wants to win a bunch of matches, but even this was hard to imagine.

"This is definitely ahead of where I thought we were going to be," Banwarth said. "My vision for Year Two was to finish in the top half of the SEC and maybe start talking about the tournament, but realistically probably not.

"But it's definitely ahead of where I thought we were going to be in our timeline."

Though the NCAA Tournament will be new to many of the Rebels and the program — the team is making its first NCAA appearance since 2010 — the players can turn to their coach, who played on four NCAA Tournament teams, including a Final Four squad, and was on Cook's staff when NU won the 2017 national championship.

When Mississippi takes the court at 7 p.m. Thursday against Creighton (30-3), it will be a familiar feeling and setting for Banwarth, who wouldn't mind seeing some one-day Rebel fans in the crowd.

"Maybe some Husker fans can pretend that their Husker red is Ole Miss red for a couple hours," she joked. "Husker fans just love volleyball, they just love good volleyball and they love supporting the Huskers and former Huskers, so I'm hoping we'll get quite a bit of Husker fans to hop on the bandwagon on Thursday night, and obviously there will be a lot of Creighton fans there, so I think it could make for a pretty exciting environment."

Reach Clark Grell at 402-473-2639 or cgrell@journalstar.com. On Twitter at @LJSSportsGrell.

If NCAA approves it, Kayla Caffey plans to play for Nebraska volleyball in 2022

Jordan Larson will wrap up her playing career then jump right into a full-time gig with the Longhorns. Here's how it all came together.

The TV numbers are in for Nebraska-Wisconsin, and yes, it drew a big rating

The top 10 Husker games from 2021 (and, yes, volleyball dominates the list)

Mississippi coach Kayla Banwarth cheers on her team after a point against Mississippi State on Oct. 17 in Oxford, Mississippi. Banwarth is in her second season running the Rebels' program.