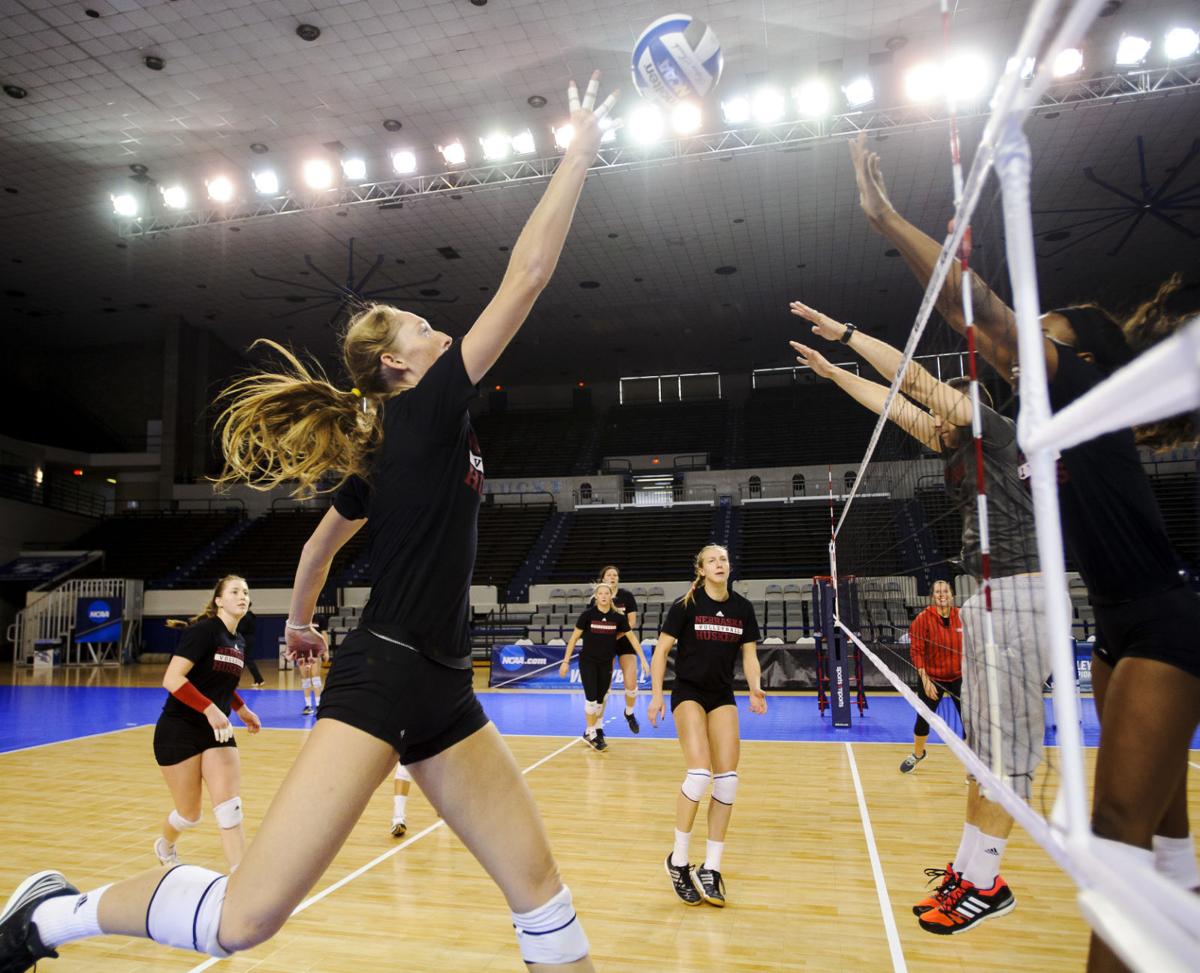 Nebraska outside hitter Kadie Rolfzen (6) tips the ball over outside hitter Tiani Reeves (far right) while practicing on Thursday, Dec. 10, 2015, for the NCAA Division I Tournament at Memorial Coliseum in Lexington, Ky. 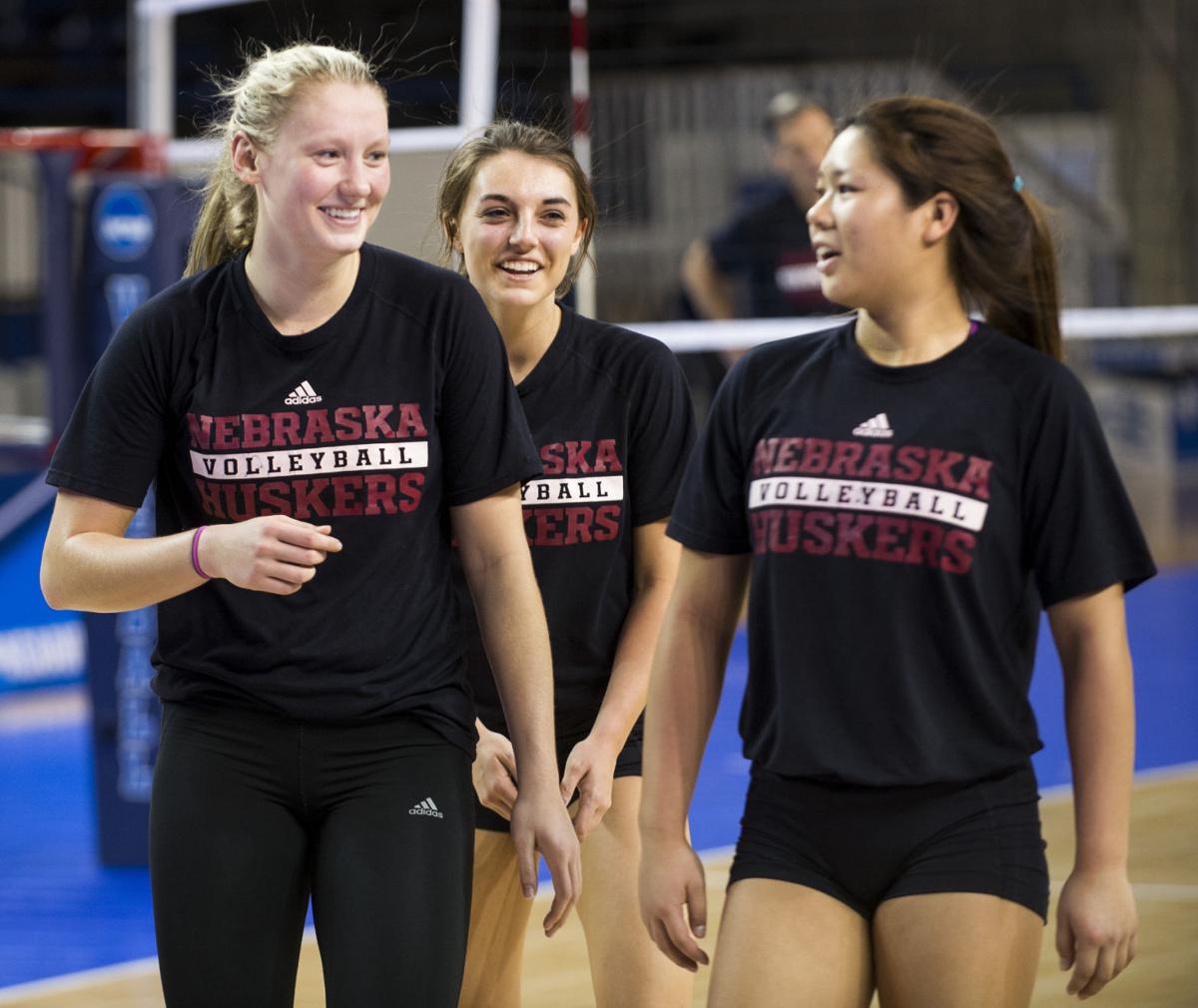 Nebraska setter Kelly Hunter (from left) defensive specialist Kenzie Maloney and libero Justine Wong-Orantes have a laugh after practicing on Thursday, Dec. 10, 2015, for the NCAA Division I Tournament at Memorial Coliseum in Lexington, Ky.

LEXINGTON, Ky. — It was about one year ago that Nebraska volleyball coach John Cook sat in the lobby of a Seattle hotel. Just a few hours earlier, for the third consecutive season, Nebraska had come up one win short of reaching the Final Four.

Cook said in that interview that the Huskers had let a great opportunity to reach the Final Four slip away with a three-set loss to BYU. Cook wasn’t dejected, though. He already had his eyes on Omaha, the site of the 2015 Final Four.

“We’ve got to do everything we can to get to Omaha,” Cook said that day.

Since then Cook has said "Omaha" more times than Peyton Manning does at the line of scrimmage during an NFL game. Cook said Omaha during individual player meetings, team meetings, pre-match meetings, post-match meetings, radio shows and news conferences.

At a program such as Nebraska, the Final Four is always the goal, anyway, so Cook decided it was better to embrace the goal of playing in a Final Four at home.

“Everybody (says), ‘Hey, I got my tickets to Omaha.’ I can’t tell you how many thousands of times I’ve heard that,” Cook said. “So I just felt like, why not embrace it. It’s there, embrace it, and we’ll use that to give us an edge.”

Twice this season, against Oregon and Penn State, Nebraska trailed 2-0 before coming back to win in five sets. The Huskers’ confidence is at a season-high now with a 12-match winning streak.

Now the season-long goal comes down to one or two matches in the Lexington regional. In the Huskers’ way are BYU and then possibly top-ranked Washington. Nebraska didn’t get a free pass to Omaha.

Here are a few things that will need to happen for the Huskers to reach Omaha:

Nebraska has lost three close matches, including 15-11 in the fifth set at Texas and 15-10 in the fifth against Ohio State.

Sometime this weekend, NU will be in a close set, and the Huskers have to win it.

“I told them it’s going to come down to us making some great plays in two-point games to get it done,” Cook said.

Nebraska prepares to be great in the biggest moments of the season by practicing fundamentals each week and working on what Cook calls national championship points.

“The national championship points are can you serve under pressure, can you take a swing against a big block at 24-24, can we stay disciplined with our game plan and stay on their tendencies and things like that,” Cook said. “That’s how we train all year, so I’d like to think we’re training to be great in the defining moments of big matches and when you get to the NCAA Tournament.”

The Huskers are feeling great now, but when adversity hits, will they push ahead or go soft?

“Playing fearless is if you’re a hitter going up just swinging at it as hard as you can, or just going for it rather than tipping or hitting a roll shot,” setter Kelly Hunter said. “And with serving, you’re not scared you’re going to miss it. You’re back there thinking you’re going to get an ace every time.”

One bad weekend, with back-to-back home losses against Minnesota and Wisconsin, cost the Huskers a chance to win the Big Ten championship. That was a defining moment, Cook said. Nebraska hasn’t lost since. But if there truly were lessons learned from those losses, it will have to be revealed this weekend.

What does Cook hope were the lessons learned from the Minnesota and Wisconsin matches?

“That we have to stay aggressive and trust our training, and that’s what we didn’t do,” he said. “We played not to lose, and that’s the lesson learned.”

Win the serve and pass game

Nebraska’s serving and passing was up-and-down last year, and that's one reason why the Huskers lost against BYU in the Elite Eight.

One of the Huskers’ four keys before the most recent match against Penn State was serving, and it probably always is.

“If you win that, you win the match,” Amber Rolfzen said.

Close matches can sometimes come down out-of-system plays, or, when a perfect set doesn’t go to a hitter. The Huskers strive to win long rallies, libero Justine Wong-Orantes said.

In a match against Wichita State in the second round of the tournament, the Huskers had a highlight out-of-system kill.

Late in the third set, Wong-Orantes set a ball from the back left corner of the court all the way to right front, where Kadie Rolfzen hit through two blockers for a kill. Kadie’s jaw dropped. They’d pulled it off.

“Justine’s play there at the end to Kadie, that’s like, I live to coach for those moments,” Cook said.

Get help from the middles

Opponents are probably going to try to slow down the Huskers’ outside hitters, so some consistent production from the middle blockers would be helpful.

When NU upset Washington last year in the Sweet 16, Cecilia Hall had a career match with 14 kills on 17 attempts.

“Anytime we can pass great and get the middle going, that’s great, because it just holds those blockers and makes them think about what’s going on,” Hunter said.

Nebraska probably has to play one or two of its best matches of the season to reach the Final Four.

Cook has asked the players to focus all season on winning the next point in the match.

“Our talk is you’re focused on the next point, and we’re going point by point on the way to Omaha,” Cook said. “I’ve given them analogies, like back in September we’re up by the (Gretna) outlet mall, now we’re to Papillion, now we’re coming into Omaha. The main thing is I said we’re going to put our heads down this whole season and we’re going point-by-point until they tell us we’re not playing anymore.”

This weekend, we’ll see if the Huskers can play two more great matches, and in doing so cruise into downtown Omaha, where 17,000 fans will be waiting.

NCAA volleyball: Huskers one win from Omaha after sweeping Cougars

John Cook was very familiar with the BYU volleyball team even before he began studying the Cougars for Friday’s NCAA Tournament regional semifinal match.

A look at the four volleyball teams competing Friday in NCAA Tournament Sweet 16 matches in Lexington.

The scene from Nebraska volleyball practice at the Lexington regional

The scene from Lexington, Kentucky, with the Nebraska volleyball team

You’ve probably seen in a basketball game when a player who scores points a finger at the player who had the assist on the play, as a show of thanks?

Nebraska outside hitter Kadie Rolfzen (6) tips the ball over outside hitter Tiani Reeves (far right) while practicing on Thursday, Dec. 10, 2015, for the NCAA Division I Tournament at Memorial Coliseum in Lexington, Ky.

Nebraska setter Kelly Hunter (from left) defensive specialist Kenzie Maloney and libero Justine Wong-Orantes have a laugh after practicing on Thursday, Dec. 10, 2015, for the NCAA Division I Tournament at Memorial Coliseum in Lexington, Ky.