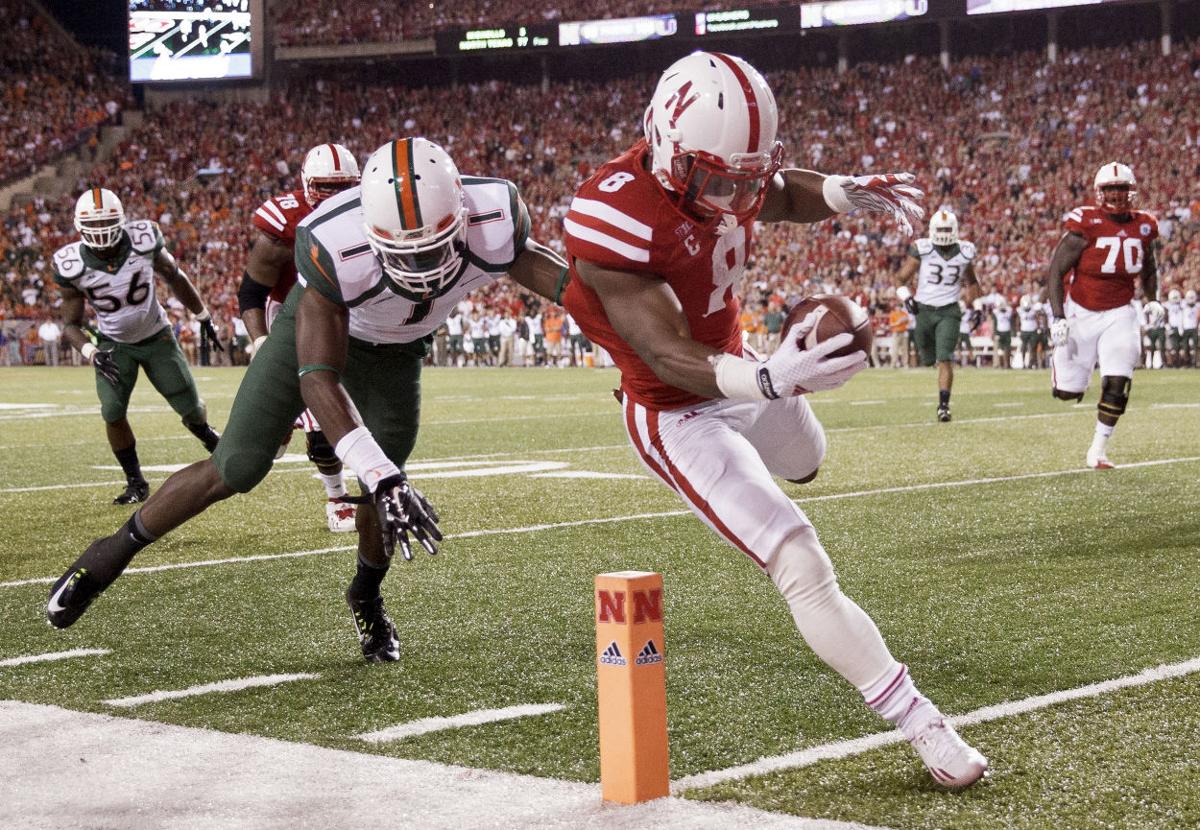 Nebraska I-back Ameer Abdullah (8) rushes into the end zone past Miami defender Artie Burns (1) for a touchdown with 7:10 left in the second quarter of Saturday’s game at Memorial Stadium in Lincoln. Abdullah had 35 carries for 229 yards in Nebraska’s 41-31 win. 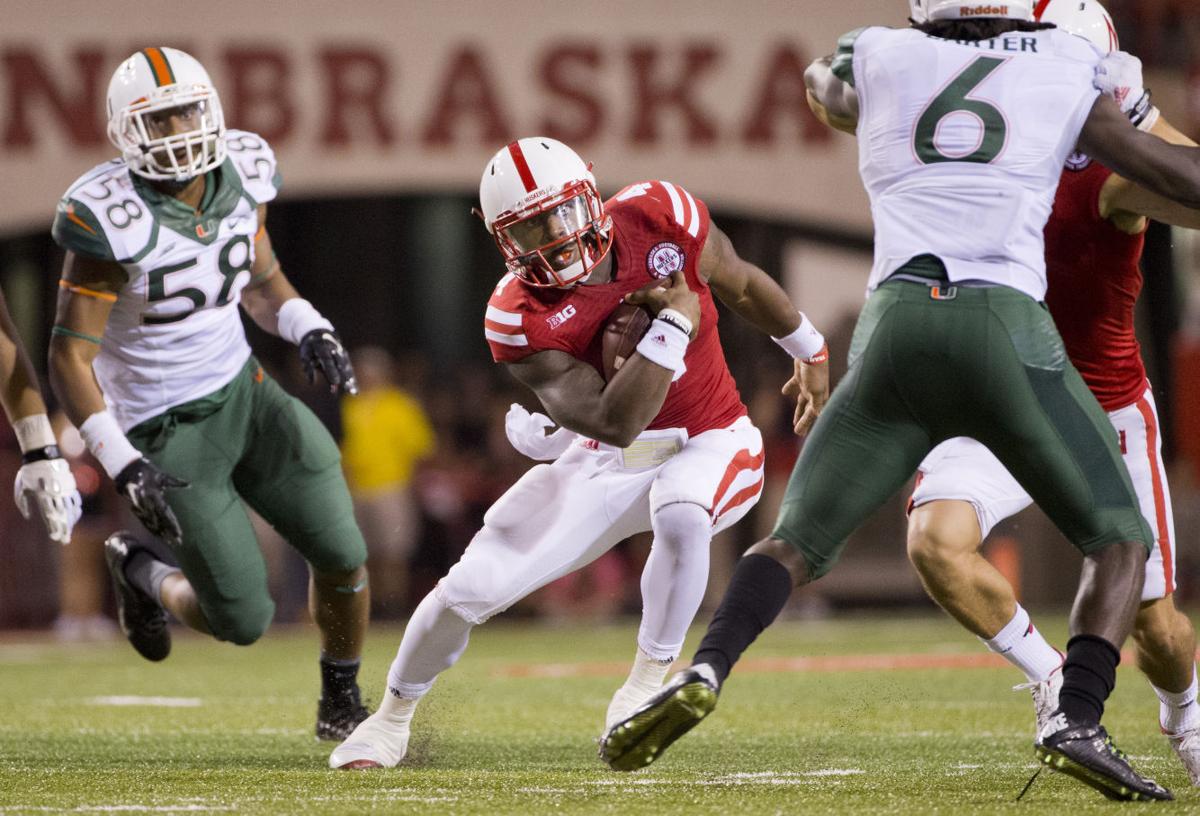 Nebraska quarterback Tommy Armstrong Jr. (4) carries the ball in the fourth quarter of Saturday’s game against Miami at Memorial Stadium in Lincoln. Armstrong ran for 96 yards in Nebraska’s 41-31 win.

LINCOLN – Ameer Abdullah was the workhorse for the Nebraska football team.

The Husker senior became the school’s all-purpose yards leader, passing Heisman Trophy winner Johnny Rodgers. He carried the ball a career-high 35 times for 229 yards with two scores, along with a touchdown reception to help No. 24-rated Nebraska come away with a 41-31 victory over Miami (Fla.) Saturday at Memorial Stadium.

“I’ve been around a lot of football and No. 8 showed why he’s special,” Nebraska coach Bo Pelini said. “He ran like a man possessed. But that doesn’t happen if the offensive line doesn’t step up. They, along with the receivers, I thought all stepped up. The running game was what won it for us and Ameer was a big part of that.”

Abdullah agreed with Pelini about the Husker offensive line. They helped the ground game come away with 343 of their 459 total yards.

“Those guys played like people who are possessed as well,” Abdullah said. “I couldn’t be prouder for them because they work their tails off every single week. They try to be so physical in practice so that they can play like that in games. I don’t think I would expect anything else from those guys.”

Nebraska quarterback Tommy Armstrong, Jr. also contributed with 14 carries for 96 yards. He also was 9-of-13 for 113 yards with two touchdowns. Pelini said he liked what he saw from Armstrong.

“I thought he managed the game pretty well,” Pelini said. “Miami had to make a choice of who they were going to take and Tommy read it pretty well the whole game.”

The game was a back-and-forth affair in the first half. Brad Kaaya helped the Hurricanes get on the board first with a nine-play drive. He was 5-for-6 for 54 yards, while Duke Johnson took it in for a 1-yard run with 10 minutes, 26 seconds left in the first.

Nebraska responded as Armstrong found a wide-open Kenny Bell for a 40-yard strike to tie the game.

And just like the last time, Nebraska responded, this time with a 14-play drive. The Huskers found themselves in a 3-and-11 situation, but Armstrong found Bell for a 17-yard reception. Nebraska drove down to the 3-yard line and Armstrong threw a 3-yard strike to Abdullah to tie the game at 14-all.

After that, the Huskers used another long drive to take the lead. Nebraska went 52 yards in 11 plays. But Miami held them to a 19-yard field goal by Drew Brown.

Nebraska didn’t stop after that. Abdullah carried the ball six times for 31 yards on its first possession of the second half. He put the Huskers up 24-14 on a 6-yard run, completing a 12-play drive.

Pelini said he thought Nebraska’s pace on those three drives got to the Hurricanes.

“I thought our tempo kind of got to them a little bit at that point,” Pelini said. “When you get the ball run at you like that, it can demoralize you and it did that with them.”

And just like Nebraska did in the first half, Miami responded when Kaaye threw a 9-yard strike to Malcolm Lewis to bring the score to 24-21.

The Hurricanes appeared to have momentum when Tracy Howard picked off an Armstrong pass. But four plays after the interception, the Nebraska defense came through when Trevor Roach caused Johnson to fumble and Josh Mitchell took it back 57 yards for a touchdown.

The Huskers appeared to have another interception on the next possession. But they were called for roughing the passer during the play, which kept the Hurricanes’ drive alive. Miami drove all the way to the six-yard line.

But Nebraska’s defense came through. Randy Gregory sacked Kaaya for a 10-yard loss and Johnson was stopped for a 2-yard loss on back-to-back plays. Michael Badgley connected on a 34-yard field goal.

After Brown added a 39-yard field goal, the Huskers got the ball back on a Joshua Kalu interception in the fourth quarter. But they got the ball further down the ball thanks to two Miami personal foul penalties. A facemask was called after a 3-yard run by Abdullah.

Abdullah got the ball on every play on the six-play drive and he took it in on a 10-yard touchdown run.

Kaaya did pass for 359 passing yards with three touchdowns through the air, but was picked off two times. The defense also limited Miami to 76 yards on the ground, along with getting a fumble recovery on the touchdown.

“I thought we played well in some spots defensively but not good enough to our standards,” Pelini said. “We did miss some tackles and they isolated us a couple of times. But I do like what this defense can be. It’s a process. But at the end of the day, we made enough plays to win the ballgame.”

With the victory, Nebraska improves to 4-0. The Huskers open Big Ten Conference play with Illinois at 8 p.m. Saturday at Memorial Stadium. Abdullah said even though they are undefeated at this point of the season, Nebraska still needs to work on getting better every week.

“It was a good win for us but we start conference play next week. From week to week, anything can happen,” Abdullah said. “We have a long journey ahead of us. We still need to get better. We can’t believe the hype right now. Just because things are going well, it can go downhill pretty quick. We just need to take every game very seriously. Every week is a new challenge. We got to take the same approach as last week and go into next week.”

Nebraska I-back Ameer Abdullah (8) rushes into the end zone past Miami defender Artie Burns (1) for a touchdown with 7:10 left in the second quarter of Saturday’s game at Memorial Stadium in Lincoln. Abdullah had 35 carries for 229 yards in Nebraska’s 41-31 win.

Nebraska quarterback Tommy Armstrong Jr. (4) carries the ball in the fourth quarter of Saturday’s game against Miami at Memorial Stadium in Lincoln. Armstrong ran for 96 yards in Nebraska’s 41-31 win.