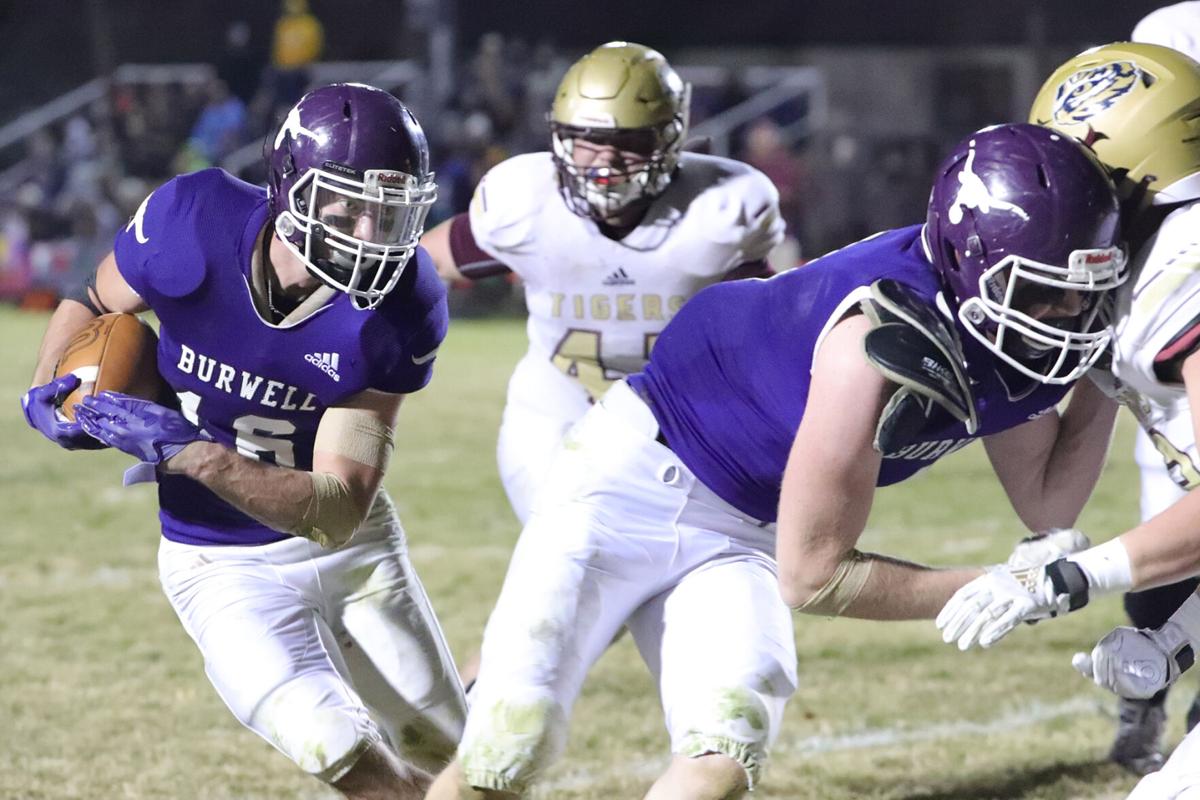 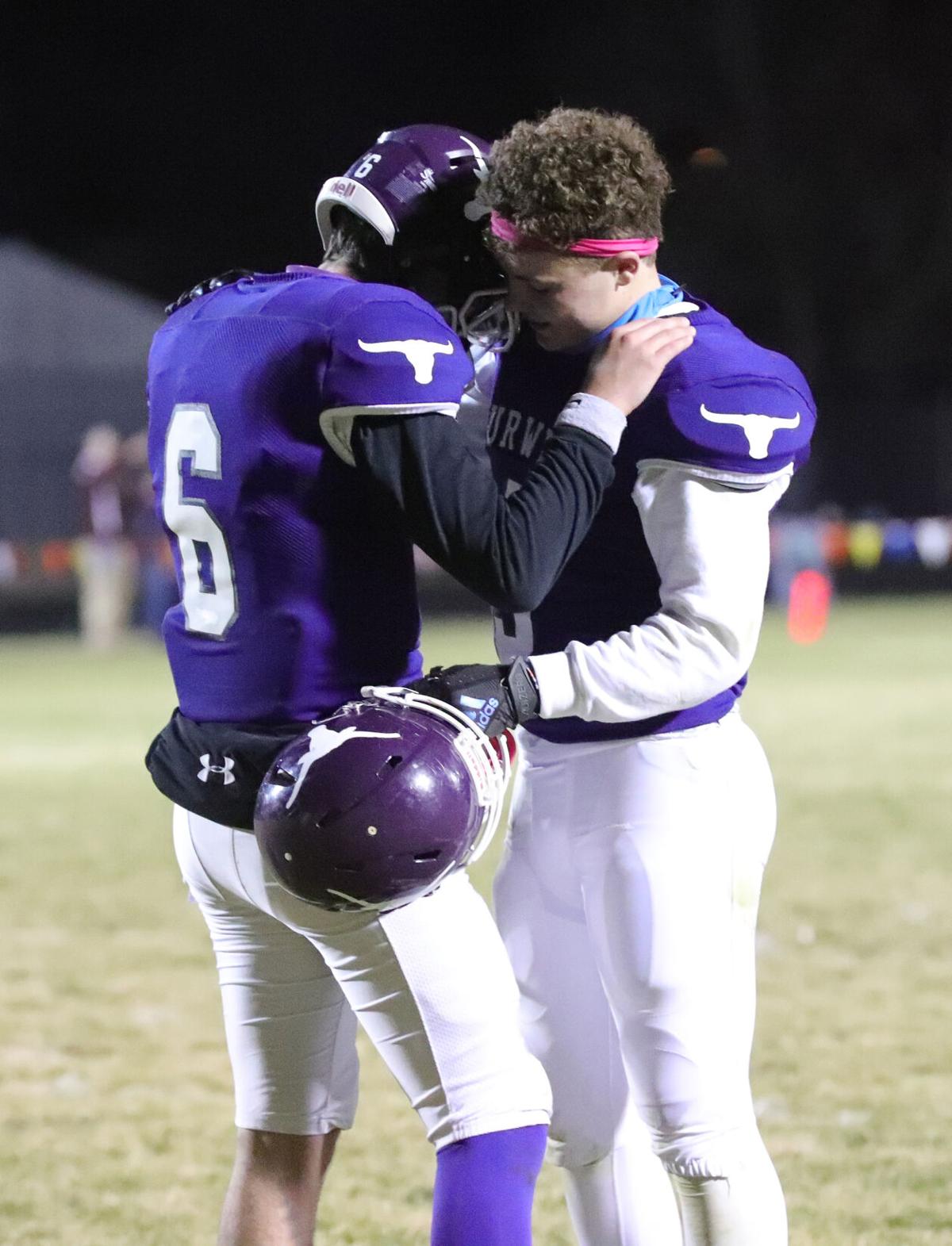 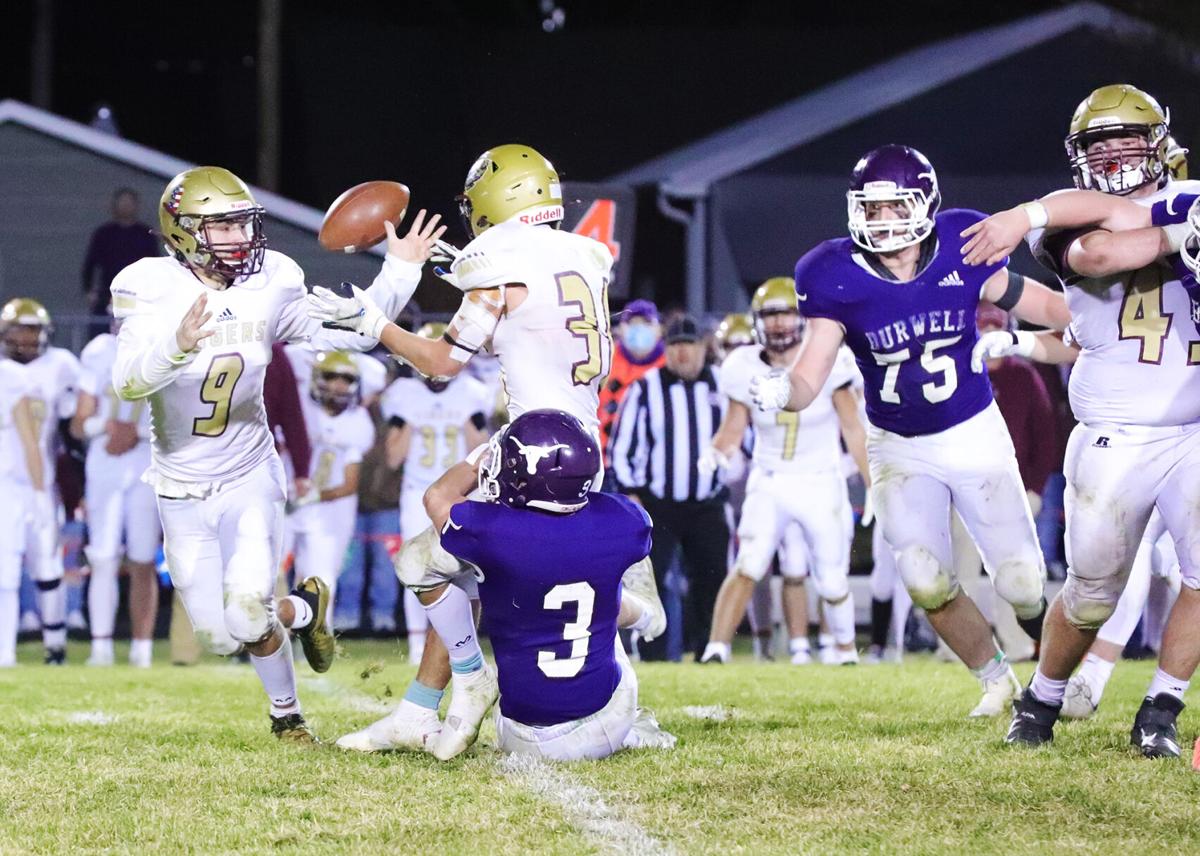 Last season – 368 days ago – the Tigers lost to Burwell in the Class D-1 semifinals.

But Friday’s bus ride home turned out to be a much happier one after a return trip to that same field.

Dundy County-Stratton stopped the Longhorns on fourth down in the second overtime period to claim the D-1 title with a 42-36 victory.

It was the final big stop in a game that had more of them than one would expect with the teams combining for 551 yards rushing and 40 first downs.

The Tigers (12-0) also stopped Burwell (12-1) inside the red zone twice in the first half, so coach Michael Spargo felt it was appropriate that was how the game ended.

“Coach (Chris) Watt, our D-coordinator, does a great job with these guys,” he said. “All these coaches do a great job – Brandon Zetocka, Chance Raichart, Matt Jarzynka. Those guys do a fantastic job with our defense, and that’s something that has gotten better over the last couple years – our defensive play. I’m proud of these guys.”

DCS took the quick lead in the second OT period when quarterback Quade Myers went in from 10 yards out on the first play. But the PAT pass failed, leaving the door open for Burwell to win.

But a holding penalty on first down backed the Longhorns up into a first-and-goal from the 17. On fourth down from the 5, running back Caleb Busch was bottled up on the left sideline near the 3 before Mark Nelms knocked him out of bounds, igniting a Tigers celebration.

“We had to find a way to get the ball into the end zone there on fourth down and just didn’t do it,” Burwell coach Luke Gideon said. “It’s not that our kids didn’t try hard the whole entire game. We got some penalties there on that last overtime drive that hurt us. You can’t get penalties and get set back like that especially when you have four downs to make it.”

Dundy County-Stratton’s first state championship came in a fashion that reminded Spargo of a playoff win from two years ago.

“It feels like South Loup from a couple of years ago when we were able to beat South Loup in a couple overtimes in kind of the same fashion – fourth-down stop in double overtime when we were up six,” he said. “Just to kind of recapture that feeling again is outstanding.”

The Tigers had to battle back with a late drive to get an opportunity to recreate that feeling.

Burwell was able to overcome a holding penalty on first-and-goal from the 10 late in the fourth quarter. Quarterback Barak Birch hit Dillon Critel crossing the front right corner of the end zone for a 26-yard score on fourth down to put the Longhorns up 28-20 with 3:32 remaining.

But Dundy County-Stratton converted on fourth-and-4 from midfield and successfully drove 65 yards to tie it up.

Serbando Diaz, who ran for 169 yards on 36 carries, scored from 3 yards out with 47 seconds remaining.

A delay of game penalty backed the Tigers up five yards for the PAT attempt. Myers was forced to scramble, but he bought time before sneaking a pass over a defender and into the hands of Diaz in the end zone to tie up the contest.

Spargo said he wanted his team to not panic in that situation.

“Just be ourselves (and) don’t get caught up in what’s going on,” he said. “Just be who we are. That’s what we wanted to focus on this whole week.”

Gideon said the Longhorns were confident after going up by eight late but DCS did exactly what it needed to do.

“We felt we were right where we needed to be or wanted to be,” he said. “We felt in control of the game, but we didn’t get a stop when we needed one. Credit them, they made some plays.

“They kept making plays, got down and scored. Even their two-point conversion play, their quarterback bought some time and made a great throw across the field. The kid made the catch, so to overtime we went.”

In overtime, Busch – who had 218 yards on 40 carries – scored on the first play. A PAT pass from Birch to Cash Gurney gave the Longhorns a 36-28 lead and put the pressure on the Tigers.

Dundy County-Stratton answered. Myers, who rushed for 116 yards on 24 carries, had a 2-yard TD on third down and passed to Corbin Horner for the tying PAT.

The Tigers used a big stop to take a 14-6 lead into halftime. Burwell had a third-and-goal from the 2-yard line late in the first half but saw the drive end inches short of the end zone.

But the Longhorns gained momentum by putting together a scoring drive to open the second half with Busch converting on a 9-yard run to cut the lead to 14-12.

“We felt in the first half we were moving the ball,” Gideon said. “A couple of drives that we didn’t finish in the first half hurt us a little bit score-wise. We left the ball on the half-yard line that one time, but putting that drive together right after halftime gave us some momentum.”

Alex Gideon’s 17-yard touchdown catch gave Burwell its first lead with 3:03 remaining in the third, but the Tigers tied it up 20-20 on a 6-yard score by Diaz on the second play of the fourth quarter.

Burwell played in the Class D-1 championship game for the fifth time in six years. This was its fourth runner-up finish.

“This one’s tough, like the other ones,” Luke Gideon said. “We got it into overtime, and it was a good game between two good football teams that just battled it out. Neither one of us would give up anytime during the game, so it goes into overtime. We just didn’t make a couple extra plays there when we needed to and just didn’t get the job done.

“Hats off to that team over there. It’s a good group, very well-coached and very deserving of what they did there. That was a hard-fought game that somebody had to lose, and tonight it was us.”

'That's what it's all about': Huskers have fun and score points in season-opening win

LINCOLN — With arms raised and a big smile, Nebraska guard Teddy Allen jogged onto the court Wednesday in an empty Pinnacle Bank Arena and ack…