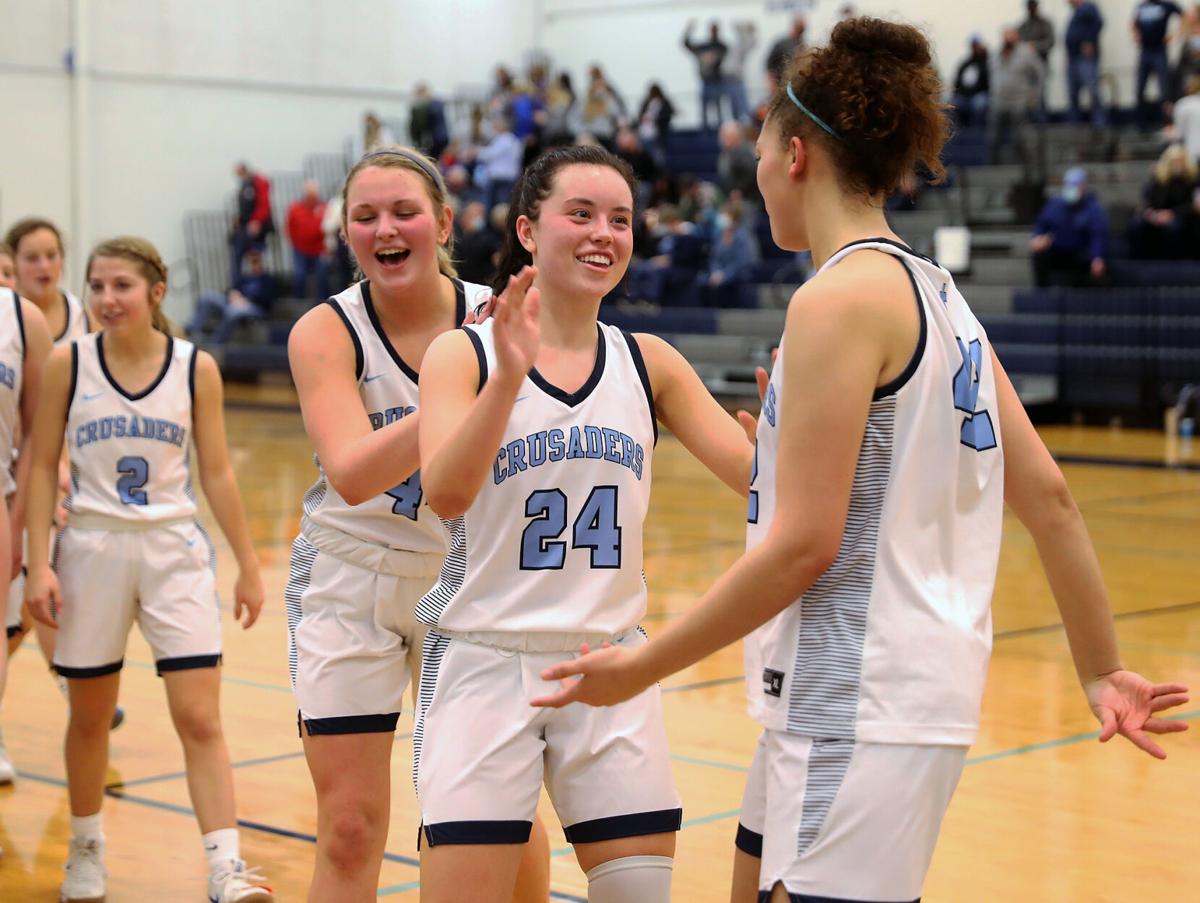 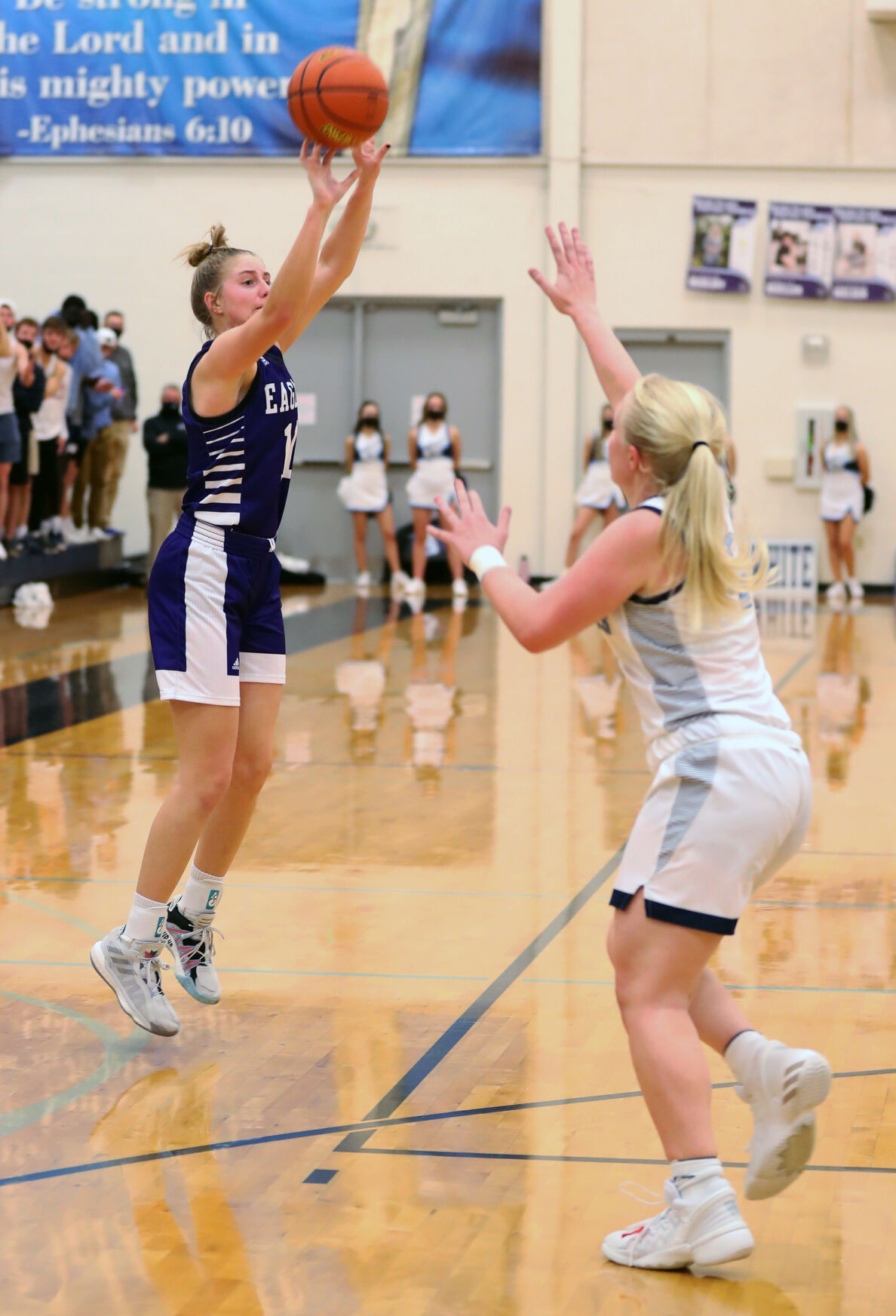 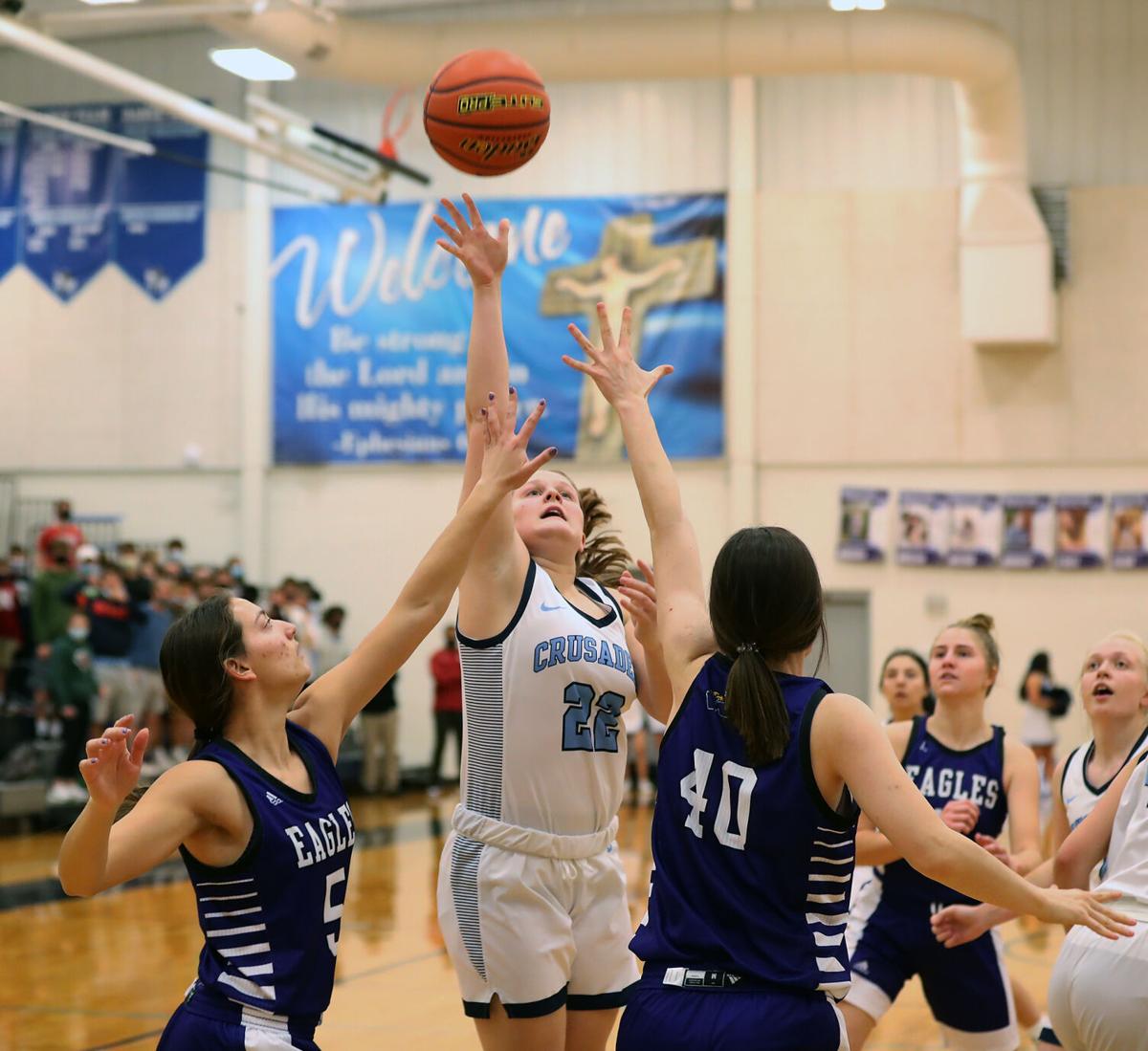 Grand Island Central Catholic's Alyssa Wilson drives in for a lay up over Wood River's Kiernan Paulk (5) and Hannah Paulk in the first half of GICC's 43-34 win. (Independent/Josh Salmon) 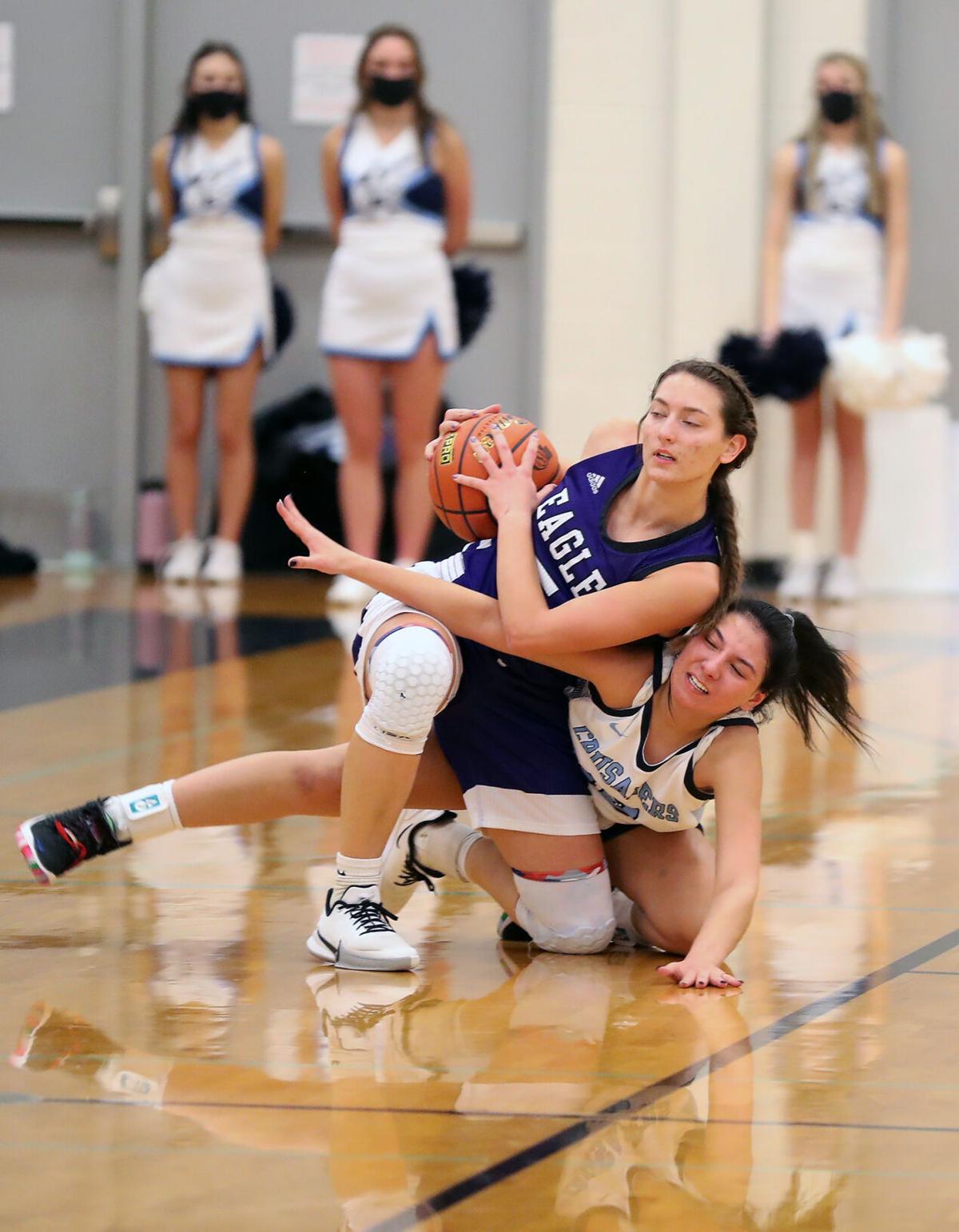 Freshman Carolyn Maser’s first of back-to-back baskets gave the Crusaders their first lead of the game with 5:31 remaining, and they made enough free throws down the stretch — barely — to eventually pull out a 43-34 victory.

Wood River (13-2) led 28-22 entering the fourth quarter, but GICC went on a 12-2 run over the first 3:13. Half of those points came inside from Maser or Chloe Cloud, who led the Crusaders with nine.

“With that diamond-and-1 (defense), that high/low was there all night,” Central Catholic coach Stacia Rice said. “We were just a little timid on scoring from the post area. Once we got going with that a little bit, things loosened up for some other shooters.

“We didn’t have a good shooting night. Wood River is a good basketball team, and I think they’re going to go really far this year.”

Maser, who finished with seven points, hit her second bucket within 44 seconds to give GICC a 34-30 advantage with 4:47 remaining.

“Carolyn stepped up so big for us tonight, and I’m so proud of her,” Rice said. “We’ve been working on a lot of things with Carolyn, and for her to come in as a freshman as a post against a really good basketball team and be able to do those things, I was just really, really proud of her.”

The teams then proceeded to go scoreless for the next 3:40, which worked to the advantage of the Crusaders (13-0).

But it still wasn’t easy closing things out.

GICC entered the game shooting 73.0% from the free-throw line as a team. But the Crusaders went 10-for-19 in the fourth quarter and missed the front end of all three 1-and-1s.

Wood River, which started the fourth with four straight turnovers, couldn’t take advantage while shooting 1-for-11 in the period.

“I felt like we played a little passive like we didn’t want to make a big play,” Wood River coach Phil Smith said. “They had a great start to the fourth quarter. Man, they had a good run. I think they got up by six and then we had to foul them. That’s the game where you have to hope they miss some and we get some finishes.”

Central Catholic overcame plenty of obstacles to pick up the win.

% Second-leading scorer Lucy Ghaifan (10.2) was still absent due to a month-long family trip to Africa.

% Gracie Woods, who was one of the team’s top scorers last year as a freshman, has missed the entire season due to an injury.

“In a diamond-and-1, things are going to be open for other people, and we have to take advantage of that. We’re not just a one-person scoring basketball team, so we’ve got to get more confident with that and be able to score, especially with the posts that we have.”

Smith said a few defensive mistakes allowed GICC to get key baskets inside while the Eagles couldn’t get inside attempts to fall on the other end.

“We had a couple lapses on defense where we got sealed behind or we came up instead of staying back like we planned,” he said. “But they made some good plays and finished when they needed to.”

Smith said senior Sage Gideon did an excellent job shadowing Rylie Rice for most of the game.

Wood River also struggled to score. Boston Boucher was held to eight points — her second-lowest total of the season — on 3-for-13 shooting.

“I thought Alexis Mudloff played a heck of a game on Boston,” Stacia Rice said. “I just thought she really bought into her role on the defensive end, and I thought she did a really good job of going through all the screens.”

Wood River fell to 2-1 in a stretch of four straight games against rated teams after picked up a huge road win at C-1 No. 3 Broken Bow last week.

Kiernan Paulk had a game-high 14 points and was 10-for-10 from the free-throw line.

“You’ve got to weather the storm,” Smith said. “This is something that is great for us to learn from moving forward — just being tough with the ball and going and finishing games.”

Martinez finds his own path in family business

In his younger days, Damian Martinez thought about following in the footsteps of his father Armando who has been a successful jockey for years.

Love At Night going after another Bold Accent win

Trainer Terry Hemmer has won his share of blankets over the years.

NORFOLK — Isaac Traudt scored 57 points Monday night, and Grand Island needed every one of them.

Look at who from the area qualified to the state wrestling tournament, that will take place next week in Omaha.

Grand Island Central Catholic's Alyssa Wilson drives in for a lay up over Wood River's Kiernan Paulk (5) and Hannah Paulk in the first half of GICC's 43-34 win. (Independent/Josh Salmon)