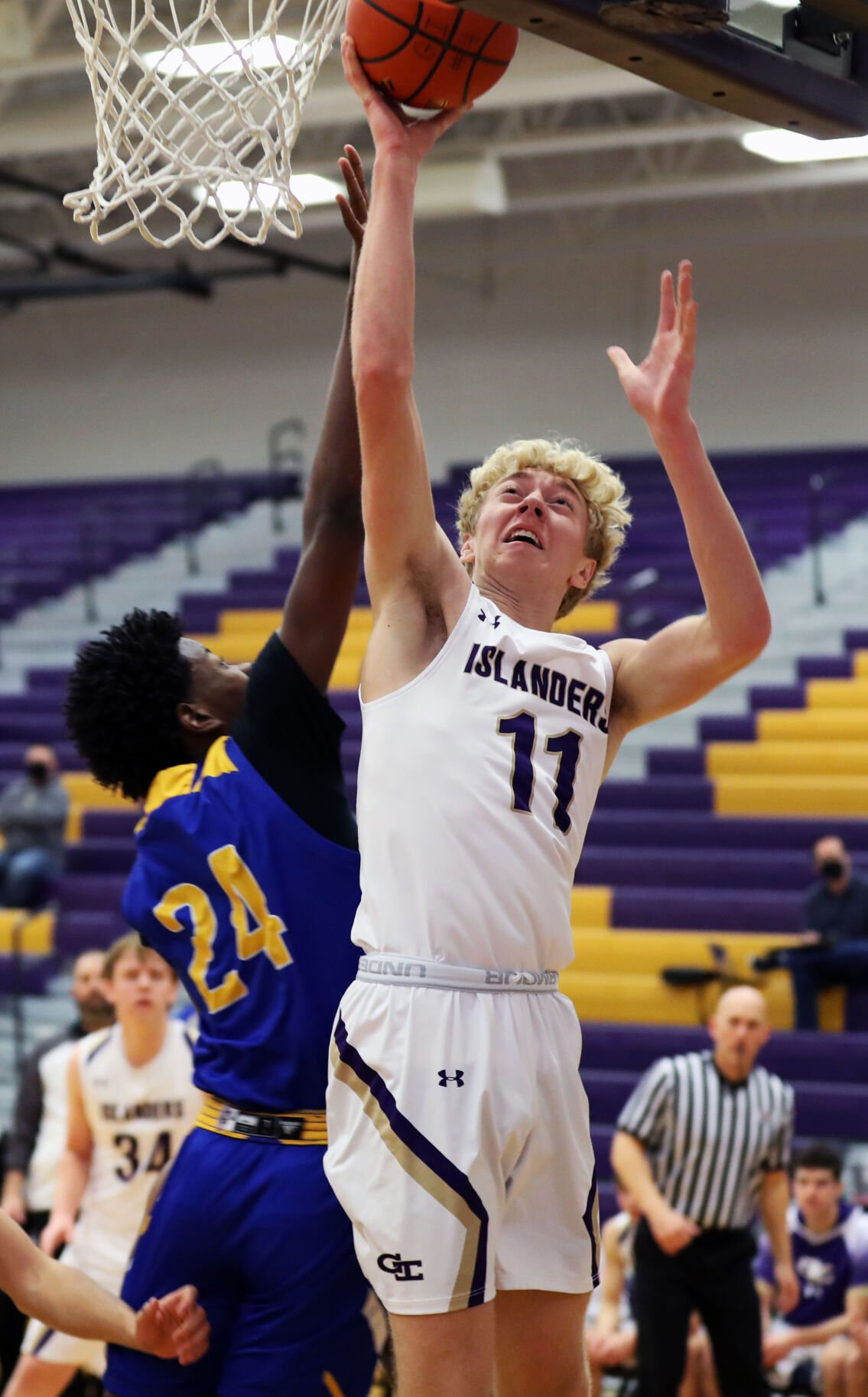 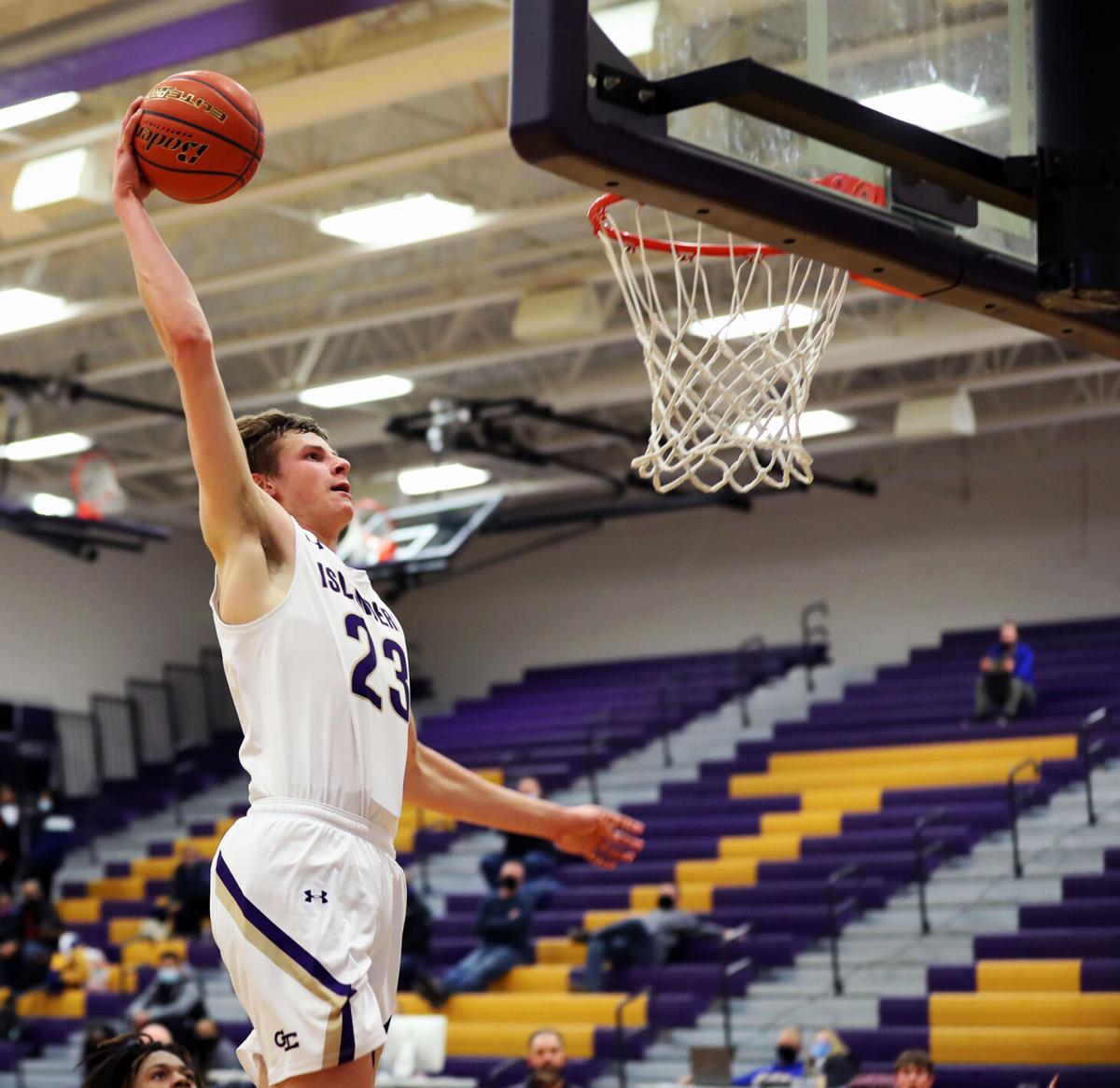 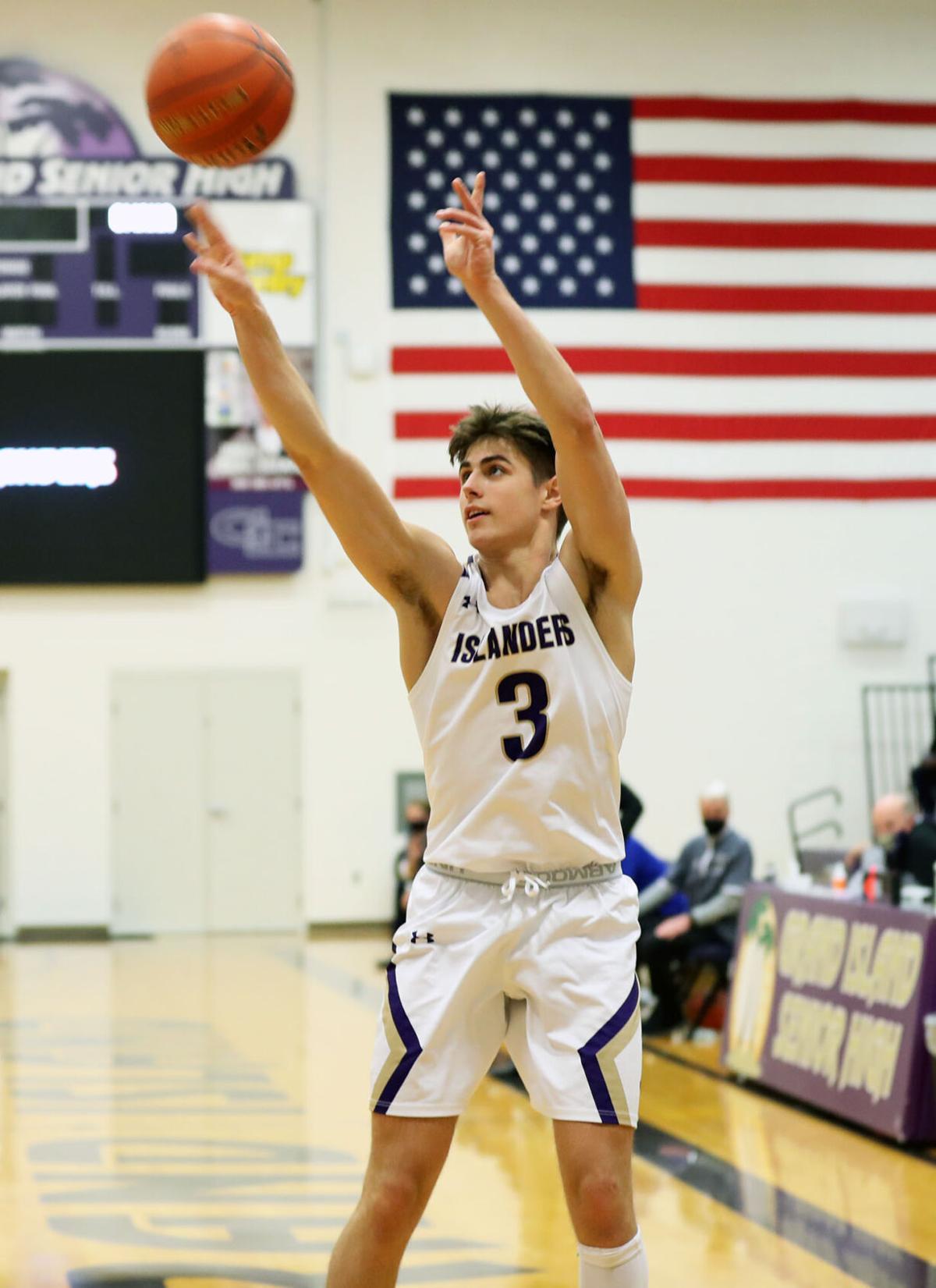 Aiden Klemme attempts a 3-pointer in the second half of Friday night's OT win over Omaha North. (Independent/Josh Salmon)

Grand Island Senior High seems to finally have this winning in overtime thing figured out.

After feeling snakebit in OT games for much of his coaching career with the Islanders, coach Jeremiah Slough saw his team come through and post its second extra-period win of the week by outlasting Omaha North 48-44 on Friday.

“I know we lost 12 in a row in overtime or something crazy,” Slough said. “We’ve won our last couple, which is nice. It never should have got to overtime. We didn’t do a good job the last couple minutes of the game of taking care of the basketball. We just kind of panicked.

“But thankfully we have an all-world player that bailed us out.”

That all-world player is Isaac Traudt, who forced overtime by hitting a 3-pointer with 11 seconds left after Omaha North (9-11) had held the Islanders scoreless for three minutes. That allowed the Vikings to go on a 9-0 run to take a 40-37 lead.

Tying the game wasn’t even the focus for Grand Island (11-9) at that point.

“We actually wanted to get (Traudt) to the rim and get a two,” Slough said. “We told him, ‘If you get stopped, you can step back and shoot your three. But we have a timeout and plenty of time, so let’s get you to the rim.’

“He liked the look that he got, so he just went ahead and pulled up.”

Omaha North’s Keshaun Williams drove the lane but couldn’t score at the buzzer, so the game went to overtime.

He said the team played with a different attitude in overtime, and that made the difference.

“We played together and played tough,” Traudt said. “They out-toughed us over the first four quarters for sure, but I felt like in overtime we did the opposite. We out-toughed them.

“We played super hard the entire game. We did a good job defensively. We just need to do a better job handling the pressure on offense.”

Things went well for Grand Island on the offensive end in overtime. Things were more inconsistent during regulation. As Slough pointed out, turnovers hurt the Islanders down the stretch with three in the final 75 seconds of regulation.

“When we’re comfortable offensively, we’re pretty good and we have rhythm and get great shots,” Slough said. “When people get up into us with ball pressure, we’re just not handling that very well. It’s knocking us out of tempo and out of our timing. So we just have to do a better job of figuring out how to handle that ball pressure.”

The victory marked what could be the final home game for the seniors.

“I’m proud of my three seniors in Alex Hinken, Aiden Klemme and Aidan Keyes that have been instrumental in our program over the last four years,” Slough said. “Also Caleb Coslor who tore an ACL, and he stuck around and gave us great leadership from a practice situation. I’m really proud of those guys, and I’m glad I got to coach them.”

Grand Island faces a quick turnaround to play Class B No. 1-rated Mount Michael Benedictine Saturday at 1 p.m. in the Heartland Hoops Classic.

“It’s tough,” Traudt said. “It’s the No. 1 team in Class B tomorrow and it’s an early game. We’re going to have to be here early for a shootaround. It’s going to be a different atmosphere than tonight. There are going to be way more people, so I feel like we’ll be amped up and ready to go. It’ll be a fun time.”

Slough agreed that the Islanders will enjoy the experience.

“We’re exited for the opportunity, more so than anything to play in an event like that,” he said. “With everything that’s gone on over the last year, there are going to be fans in the stands. There’s going to be a buzz.”

We are a month into the track and field season.

The Tri-City Storm saw its bid to win a Clark Cup end early.

Aiden Klemme attempts a 3-pointer in the second half of Friday night's OT win over Omaha North. (Independent/Josh Salmon)