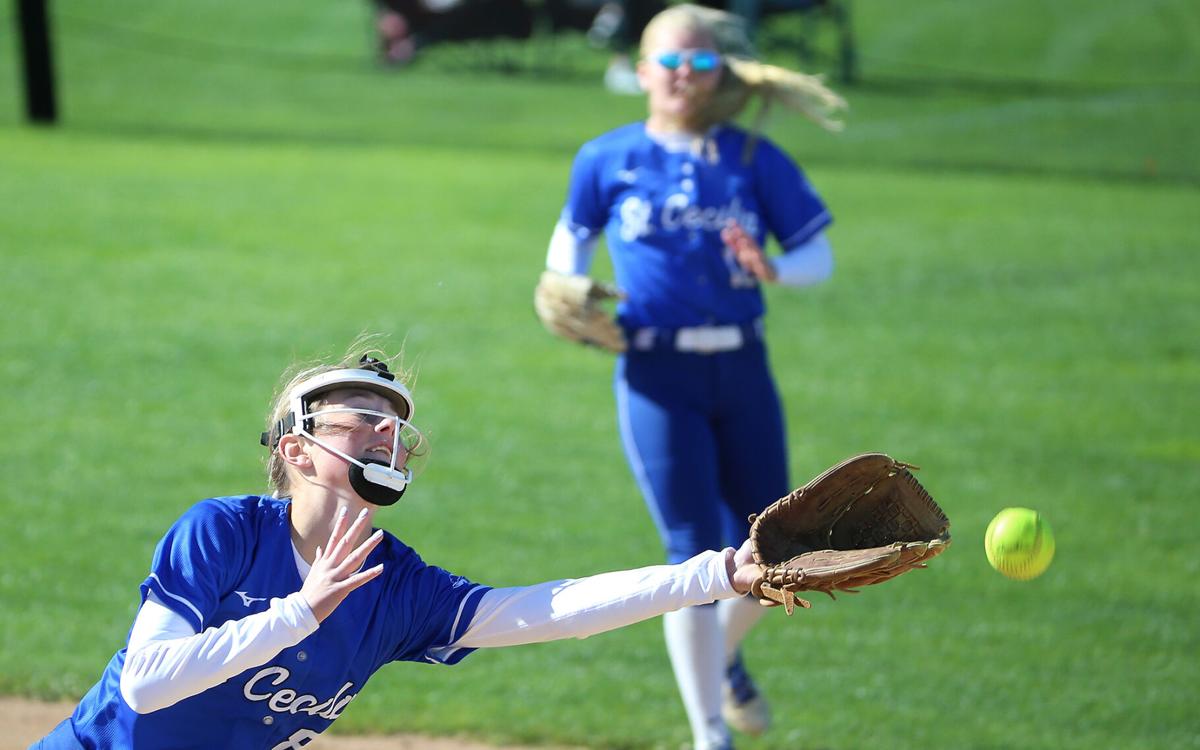 Hastings St. Cecilia's Olivia Kvols has a hard time catching a ball against the high winds in round one of the Class C state softball championships in Hastings. St. Cecilia was defeated by Kearney Catholic 6-4. (Independent/Josh Salmon) 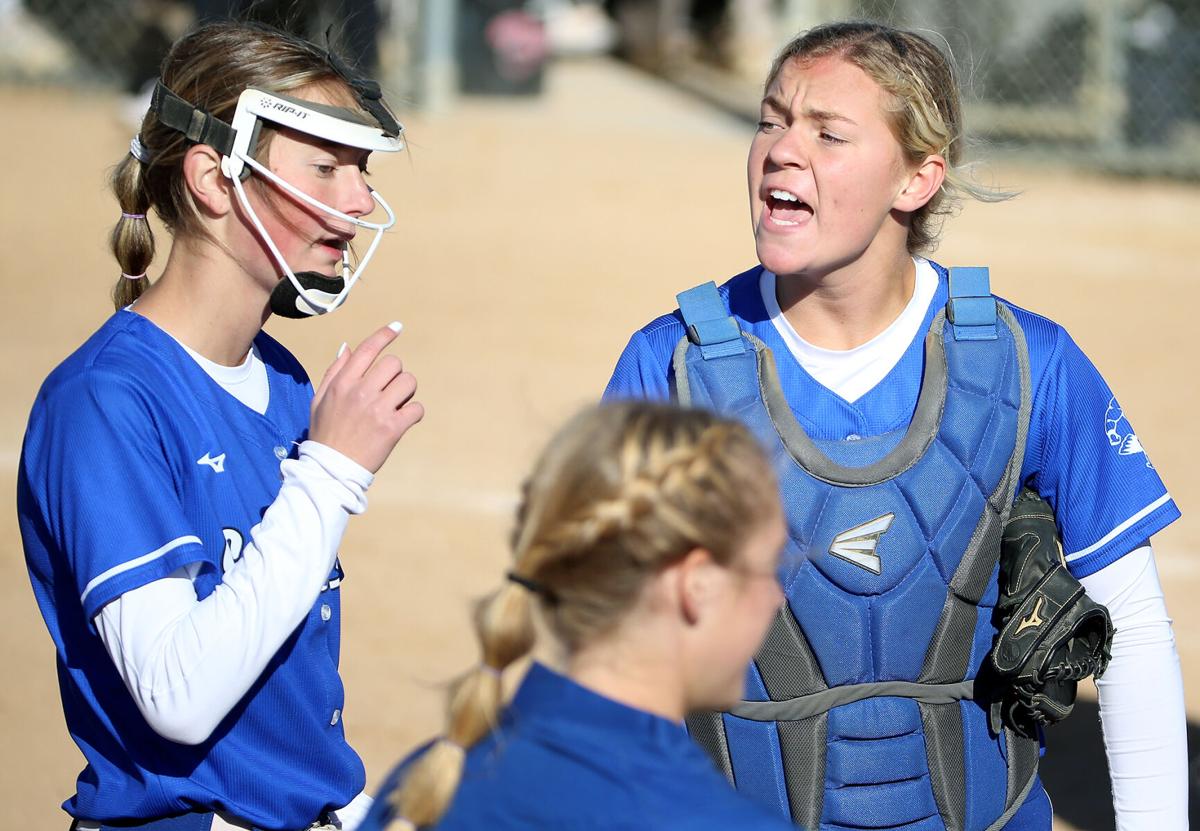 Hastings St. Cecilia catcher Shaye Butler fires up her teammates during Wednesday's round of of the Class C state softball championships in Hastings against Kearney Catholic. (Independent/Josh Salmon) 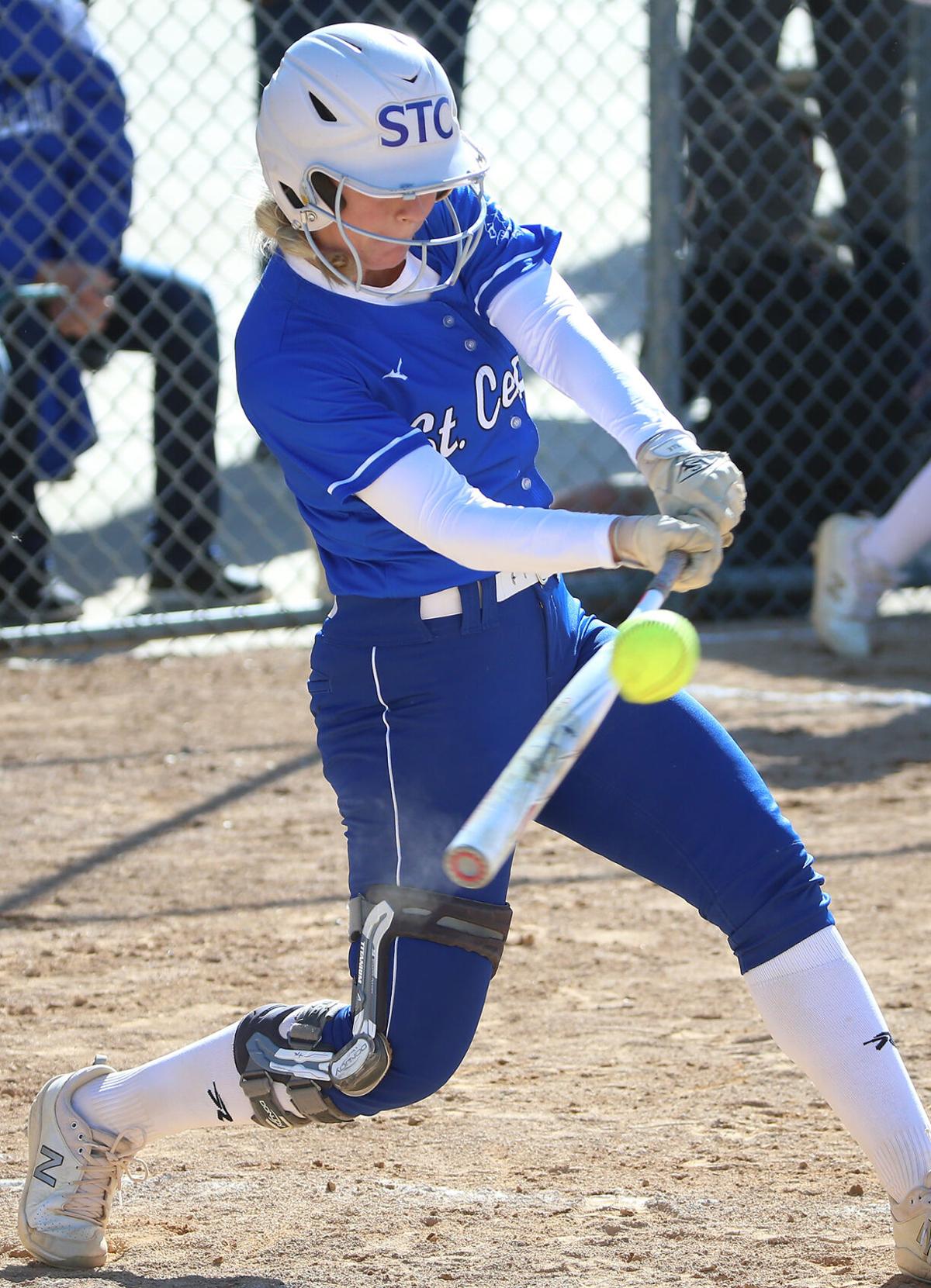 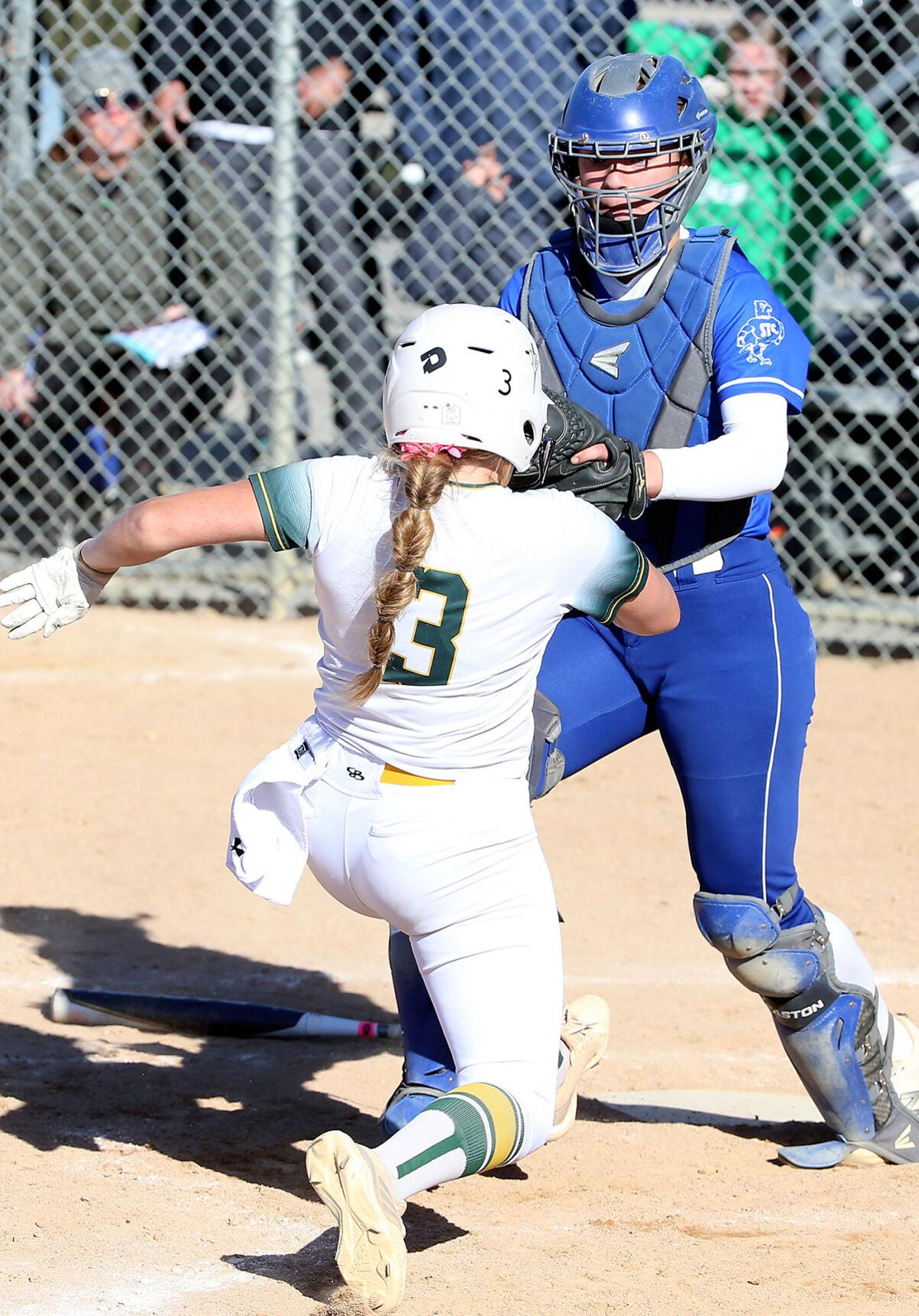 The four-year-old softball program is making its third consecutive Class C state tournament appearance. But the Hawkettes still await their first win after falling to Kearney Catholic 6-4 in Wednesday’s opening round at the Smith Complex.

The No. 5-rated Stars – who lost to No. 2 St. Cecilia three times in the regular season – used a three-run home run in the first inning from Lauren Marker along with a game-saving diving catch from right fielder Kami Kaskie to drop the Hawkettes to 0-7 in state tournament play.

“We’ve just got to forget about it and focus on the next game,” St. Cecilia coach Ryan Ohnoutka said. “It’s tough. Emotions run high here in the state tournament, but I felt we lost that game right away in the first inning by giving up four runs.

“We had chances to get out of that inning, but that’s the way softball is. Sometimes the ball bounces your way, sometimes it doesn’t, and sometimes the wind blows 40 miles per hour and takes a ball somewhere else.”

The Stars (30-6) had one on with two outs in the top of the first before an error and a single resulted in one run. Then Marker sent an 0-1 pitch with the gusty wind over the fence in right field to push the lead to 4-0.

Trailing 5-1, the Hawkettes (28-8) rallied in the bottom of the fourth. Baily Kissinger – who entered the tournament with a .600 average – hit a two-out, two run single to left.

Olivia Kvols followed with a single to close the gap to 5-4.

“Our girls have a lot of pride,” Ohnoutka said. “We’ve come from behind before in games, so I knew we were going to do it. We just fell short.

“We tried to talk with this wind we rely on our long ball at times throughout our season. Depending on what field you’re on, it can be taken away from you. We tried to focus on trying to hit line drives and some ground balls…but we couldn’t get that huge inning that we wanted.”

“Biddlecome was on,” Ohnoutka said. “Her ball was moving, and she just turns it on in the state tournament. She was a lot different than when we faced her the last couple of times.”

The Hawkettes got back-to-back singles from Shaye Butler and Kiersten Kober in the bottom of the seventh to get the tying run on with one out. But after Tatum Krikac lined out to second baseman Payton Schirmer, Kaskie came up with a game-saving diving snow cone catch in right on a fly ball from Tayelor Butler.

Kissinger and Shaye Butler each had two hits for the Hawkettes, who face Freeman in an 11:30 a.m. elimination game Thursday.

St. Cecilia defeated the Falcons 4-3 in its third game of the season. Freeman lost to Guardian Angels Central Catholic 19-11 in five innings.

“I’m not too worried,” Ohnoutka said. “Our girls show resiliency, so they’ll bounce back. They’re going to be ready to go in the morning. I know it’s tough to sit here and think about that one for a while, but we have to get over it and think about the next game.

“We’ve played Freeman before, so we know their style of play. We need to come ready to go in the morning.”

Hastings St. Cecilia's Olivia Kvols has a hard time catching a ball against the high winds in round one of the Class C state softball championships in Hastings. St. Cecilia was defeated by Kearney Catholic 6-4. (Independent/Josh Salmon)

Hastings St. Cecilia catcher Shaye Butler fires up her teammates during Wednesday's round of of the Class C state softball championships in Hastings against Kearney Catholic. (Independent/Josh Salmon)