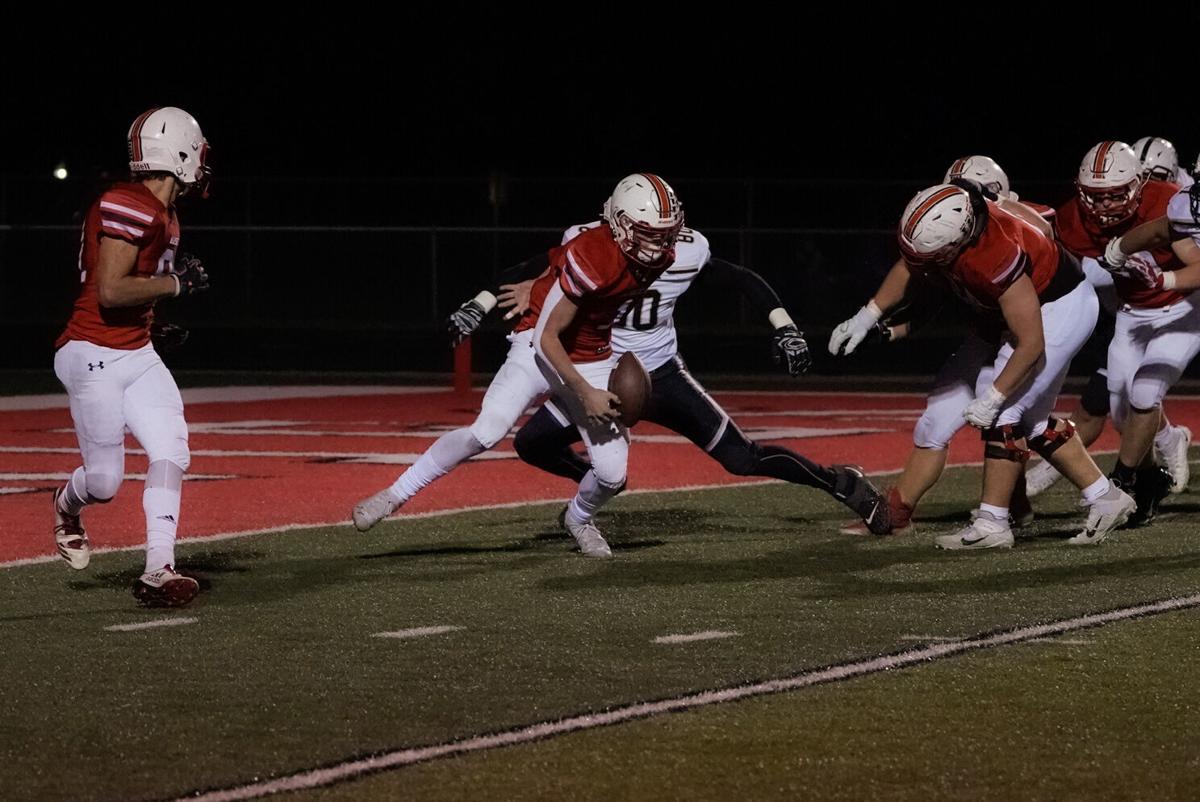 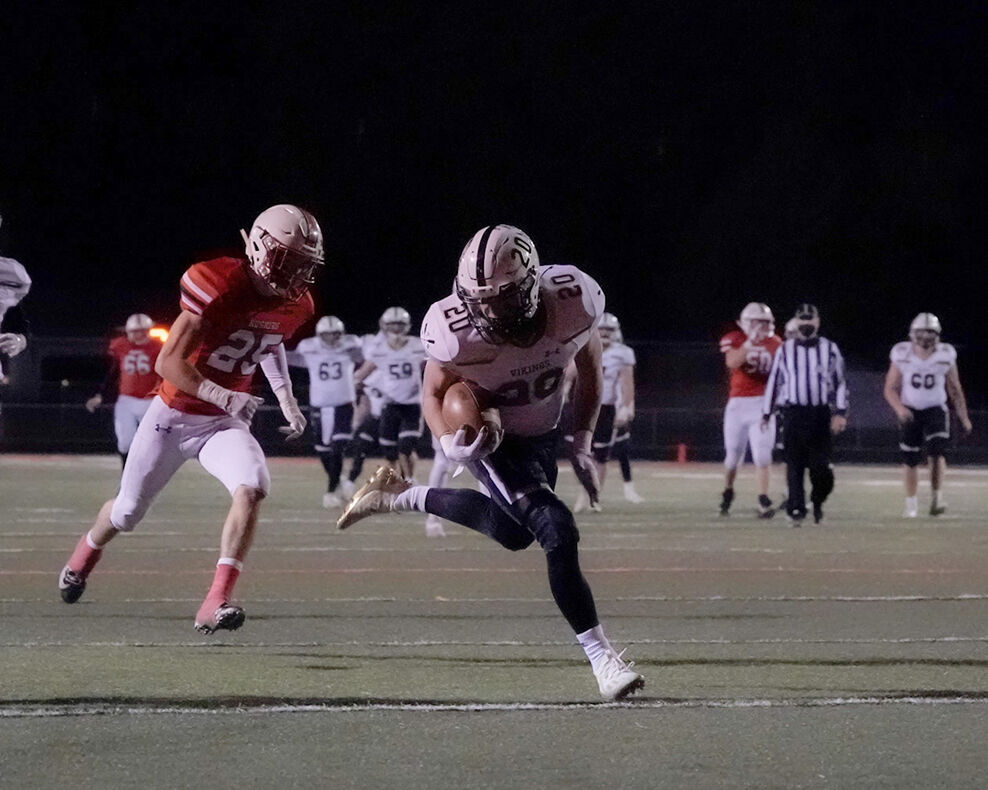 Austin Cooley catches a long pass and scores in the second quarter for Northwest in its 36-29 win over Aurora. (For The Independent/Ellis Collins) 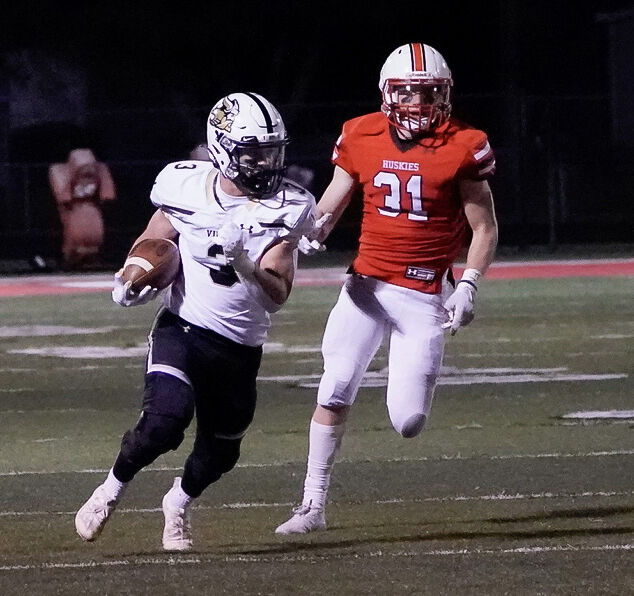 Northwest’s Brady Baasch scampers down the sideline during the Vikings' 36-29 win Friday night. (For The Independent/Ellis Collins)

The Class B, No. 9 Vikings started with the momentum in the first quarter and the No. 5 Huskies just couldn’t find a groove at first.

“We just weren’t quite ready for it,” he said. “Credit to them they had a game plan and stuck to it.”

Northwest scored on their first drive of the game on a 19-yard pass from quarterback Sam Hartman to Riley Anderson. That is where the scored stayed until the second quarter.

After a fumble on the three-yard line the Vikings scored again on a 19-yard rushing TD by Brady Baasch to make it 14-0.

Aurora ran then scored on their next possession on a 14-yard pass from quarterback Ethan Shaw to Jacob Settles. The two-point conversion was no good and Northwest lead 14-6. Settles had 67 yards in the game.

The Vikings scored one more time in the half on a 42-yard pass to Austin Cooley to lead 21-6. That’s when Aurora began their comeback.

The Huskies scored 16 straight points against Northwest and really felt more comfortable, at least according to Ilge.

“The second quarter we played much better football. Things started clicking again and we got the momentum,” he said. “It was reminiscent of the last few weeks in the quarters and the halves.”

The Huskies next scored on a 12-yard strike to Andrew Bell. After a two-point conversion, Northwest’s lead was cut to 21-14.

The Aurora defense then intercepted a pass from Hartman. After two long runs from Britton Kemling, the Huskies were poised to score from the 2-yard line.

Aurora got in the endzone again after they forced a Viking fumble and recovered it. They turned that into a touchdown from Mack Owens.

“We made boneheaded plays on offense and were just a train wreck,” he said. “We started pointing the fingers at each other and momentum got on Aurora’s side. Here we are beating each other up, tearing each other down and they were rolling as a team together.”

Northwest attempted a field goal before the half ended but shanked it wide as Aurora led 22-21.

At the break, Stein said he told his guys to suck it up.

“We told them to shut their mouths and play. That was probably the best coaching point me made all night,” he said.

Aurora brought their momentum with them in the third quarter but fumbled in on their first possession.

The Vikings were unable to capitalize on the turnover due to the Aurora defense.

The Huskies scored on their next possession on a 25-yard strike to Settles to give them a 29-21 lead.

Northwest then scored on their next possession on a 24-yard pass to Anderson to cut the lead to 29-28 after three.

In the fourth quarter, Stein said they switched up their defense a bit and confused Aurora.

“They were getting to the edge and we widened our backers a little bit,” he said. “We tightened our corners a bit. Really just kind of caught some breaks.”

With less than two minutes left, Northwest took it into the endzone on a pass to Anderson, who ended the night with 92 yards total.

This time Stein decided to go for two.

“I was thinking don’t chase points early in the third quarter when we scored, and I hope my decision to kick it then and not go for two didn’t bite us, it almost did. I wish we would’ve there,” he said.

He said he hoped the gamble would pay off in this time, here in the fourth quarter.

“It was a great play call, Sam (Hartman) read the option perfect and we were able to get it and it really gave us another boost of confidence,” said Stein.

Aurora got the ball back with a little over a minute left on the clock but failed to make it to the 50-yard line.

Stein said the week off last week didn’t make any difference in this game, the Vikings are always ready to play rival Aurora.

“We are always fired up to play Aurora,” said Stein. “I think we were healthier this week, that was the biggest thing.”

Another strong dose of “Islander defense” proved to be an encouraging sign for Grand Island Senior High after Friday’s regular-season finale.

The Class A playoffs arrive a week earlier than usual and with a different format.

Crusaders finish fourth in Class B

Austin Cooley catches a long pass and scores in the second quarter for Northwest in its 36-29 win over Aurora. (For The Independent/Ellis Collins)

Northwest’s Brady Baasch scampers down the sideline during the Vikings' 36-29 win Friday night. (For The Independent/Ellis Collins)