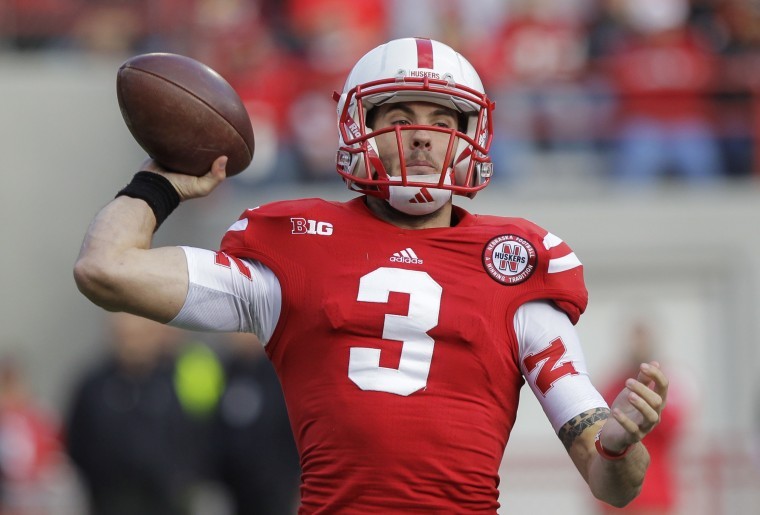 Nebraska quarterback Taylor Martinez attempts a pass during the Huskers' 38-14 win over Minnesota  on Saturday at Memorial Stadium in Lincoln. 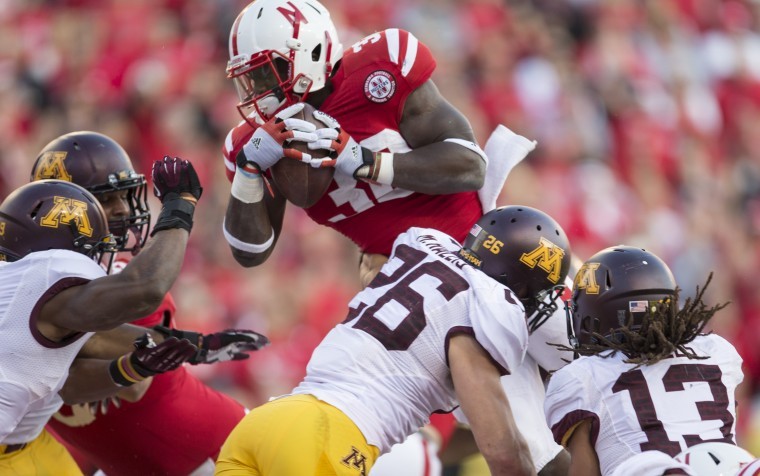 Nebraska running back Imani Cross leaps over the goal line for a touchdown during the second quarter on the Huskers' Nov. 17 game against Minnesota at Memorial Stadium in Lincoln.

LINCOLN – No comeback was needed this time for the Nebraska football team.

Thanks to a strong first-half effort by both the offense and defense, the No. 16-rated Huskers got off to a strong start to lead 24-0 at the break and never let up in a 38-14 win over Minnesota on Saturday at Memorial Stadium.

The Nebraska offense had 306 of its 444 total yards in the first half while holding the Golden Gophers to 60 yards with four first downs. In all, the defense held Minnesota to 177 yards of offense.

Nebraska coach Bo Pelini said it was a good win.

“I’m happy to get to the win,” he said. “I thought it was a pretty good effort by our team in all regards, pretty complete effort. I thought our kids came out and played hard and did some good things.”

Taylor Martinez was a reason why the Huskers were successful against Minnesota. The junior quarterback was 21 of 29 for 308 yards with two touchdown strikes. He became Nebraska’s leading career passing leader with 6,140 yards, surpassing Zac Taylor’s record of 5,850 passing yards.

“That’s awesome because there’s been so many great quarterbacks to come through here,” Martinez said. “(Nebraska graduate assistant) Joe Ganz has helped me a lot. I could not have done that without him, the coaches and teammates.”

Pelini thinks Martinez has played at a high level all year long.

“He’s really comfortable with the game plan — which I think he was today – and really has a good understanding of what we’re trying to do. I thought he executed really well,” Pelini said.

It didn’t take long for the Huskers to get on the board. Martinez was 3-for-3 for 32 yards, while Minnesota helped Nebraska’s cause with a personal foul penalty. Brett Maher completed the drive with a 39-yard field goal with 11 minutes, 49 seconds left in the opening quarter.

After stopping the Gophers (6-5, 2-5) on three plays, it took Nebraska eight plays to get its first touchdown. Martinez went to the air on the final play of the drive and found Kenny Bell for a 36-yard strike to take a 10-0 lead.

Nebraska scored again two possessions later. Bell caught a 29-yard pass from Martinez that took the ball to the 3-yard line. Imani Cross finished the drive with a 3-yard touchdown run for a 17-0 lead.

After Minnesota only got off a 7-yard punt on the next possession, the Huskers took advantage with a four-play drive. Quincy Enunwa’s 29-yard reception helped set up Cross’ second touchdown of the day.

Nebraska drove down to the 1-yard line on its final drive of the first half but couldn’t get points as Cross was stopped.

Meanwhile, the defense made life miserable for Minnesota quarterback Philip Nelson. After Nelson completed his first five passes, the freshmen only completed three of his next 18 passes. He also threw two interceptions, including one returned 48 yards for a touchdown by Stanley Jean-Baptiste in the second half.

In all, Nelson had 59 passing yards. Minnesota coach Jerry Kill said a combination of things led to Nelson and the Gophers struggling.

“But Nebraska is good up front. They make it tough on you, they play an SEC style defense, they are going to play Cover 1 and get guys in the box. They made it tough for anyone to catch the ball as well. There is a reason why they are where they are as a team.”

After the first interception, Bell caught a 30-yard reception for his second touchdown pass from Martinez for Nebraska’s only offensive score in the second half. Bell caught nine passes for 136 yards.

Minnesota did score two touchdowns in the final quarter to complete the scoring. MarQueis Gray scored on a 1-yard run and a 6-yard run.

With the way the Huskers have been winning by coming from behind in three of the past four games, Pelini said he was happy to see Nebraska get off to a good start, even though he couldn’t wait for the game to get over.

“I really enjoyed it,” Pelini said. “It seemed like that second half though lasted three years. That might have been the longest fourth quarter I’ve ever been a part of. Maybe it was just me because of the situation, but that clock...if there had been one more TV timeout, I might have taken it to the house.”

The Huskers will wrap up the regular season with a matchup with Iowa at 11 a.m. Friday in Iowa City. Pelini said it will be a challenge for the Huskers to get ready against the Hawkeyes because of a short week.

“They will need to get their work done and get ready to go,” Pelini said. “Like I told the coaches and players, you have to get everything done in a three-day span. They can do it, it’s just going to require a little bit greater attention to detail all through our practice schedule. We’ll get ready.”

Nebraska quarterback Taylor Martinez attempts a pass during the Huskers' 38-14 win over Minnesota  on Saturday at Memorial Stadium in Lincoln.

Nebraska running back Imani Cross leaps over the goal line for a touchdown during the second quarter on the Huskers' Nov. 17 game against Minnesota at Memorial Stadium in Lincoln.