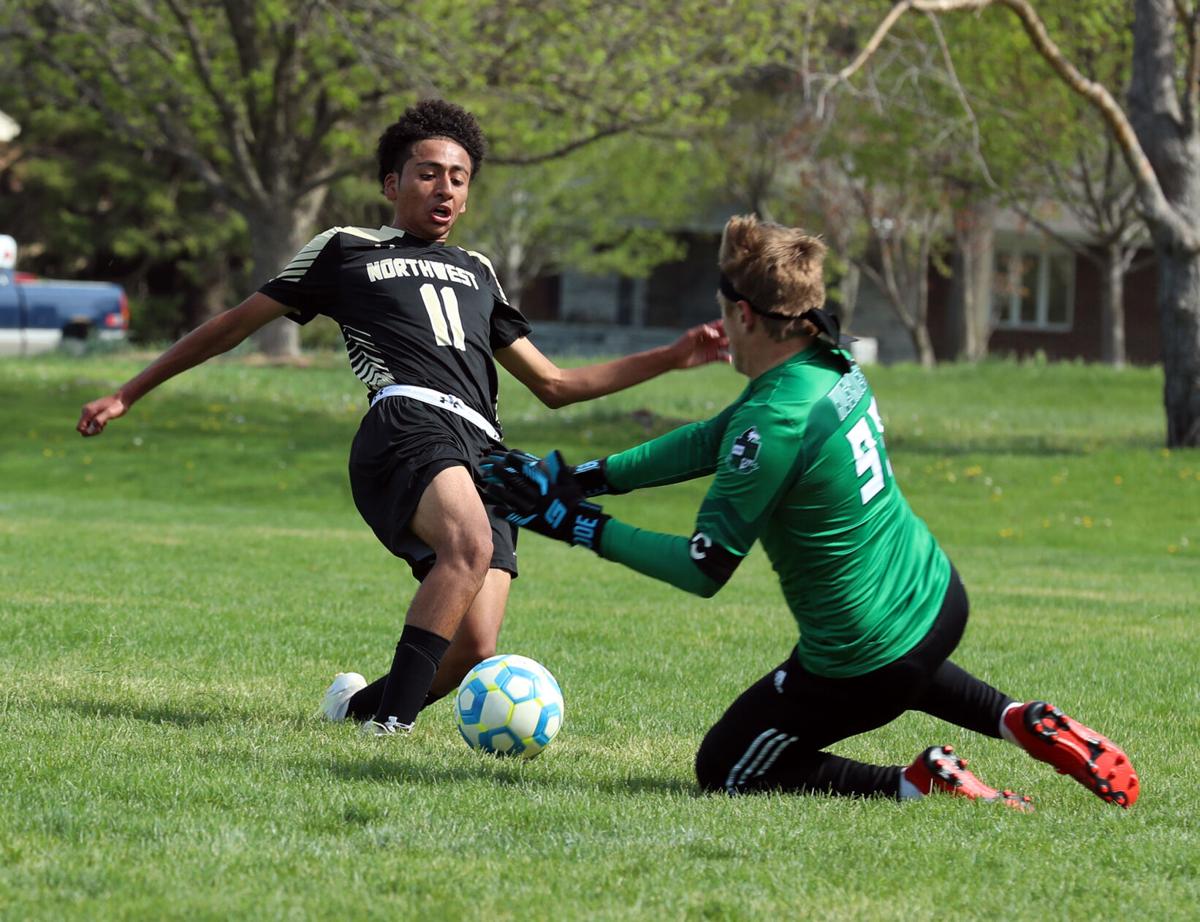 Northwest’s Jarit Mejia tries to get a ball past Aurora goalie Jacob Penner Monday night during the Class B, Subdistrict 7 Tournament. Mejia scored two goals during the Vikings 3-0 win over the Huskies.(Independent/Josh Salmon) 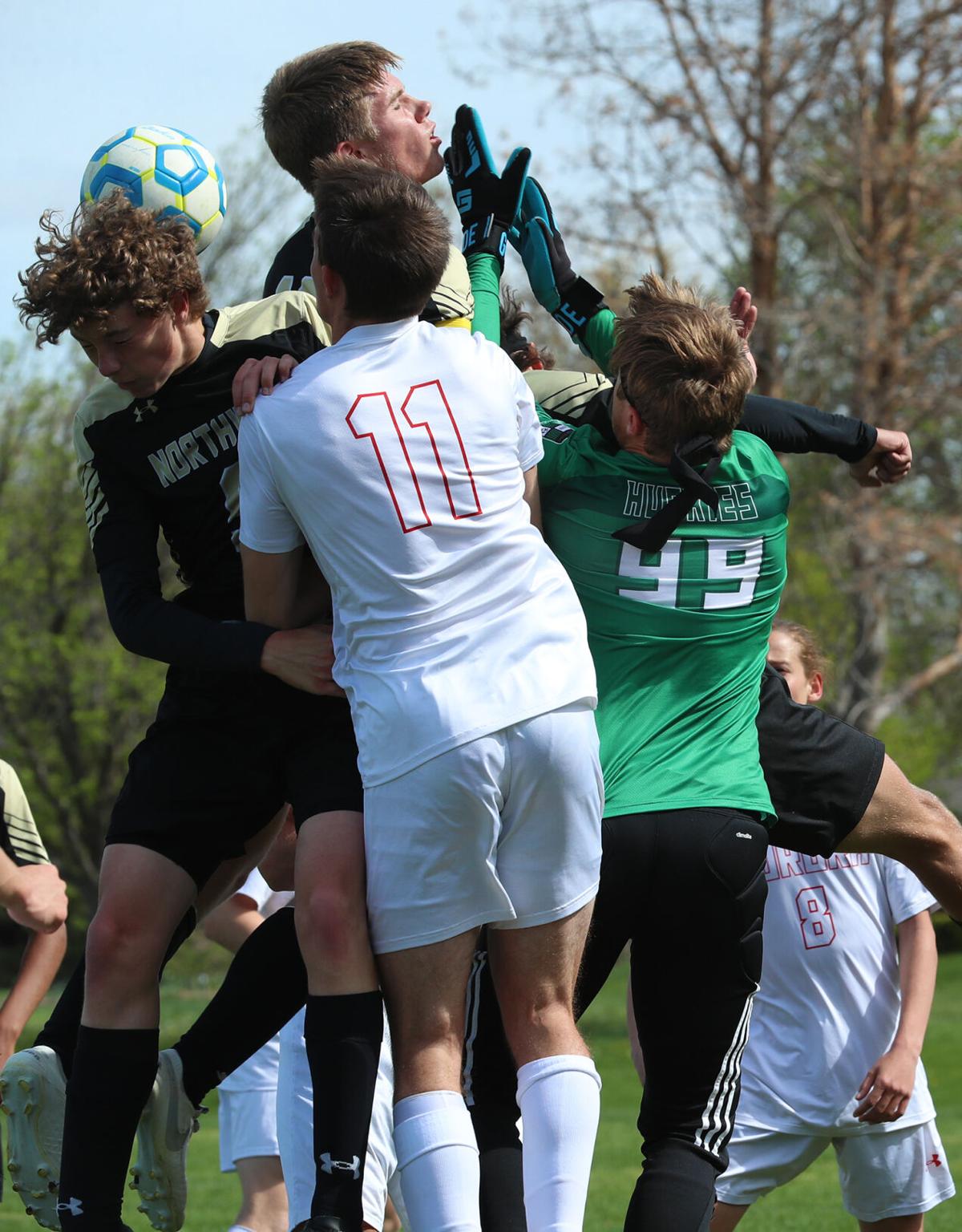 Northwest teammates Trevyn Keene and Parker Janky both go for the ball over Aurora's Andrew Bell (11) and Goalie Jacob Penner during the Class B, Subdistrict 7 Tournament Monday at Northwest High School. (Independent/Josh Salmon)

Class B No. 5-rated Northwest got its postseason off to a more than encouraging start Monday.

The Vikings put together one of their best all-around performances of the season to pick up a 3-0 shutout win over Aurora in the Subdistrict 7 semifinals.

“I feel like we played really well today, better than ever,” said junior midfielder Jarit Mejia, who scored Northwest’s first two goals. “This was one of the best games we’ve ever had so far in our season, so I’m very happy and excited.

“We felt really connected today and played with passion.”

Vikings co-head coach John Kenna said the team did what it wanted to do to control the game and hold a 31-8 advantage in shots.

“Start to finish, I thought we won a lot of the 50/50 balls,” he said. “We played really well executing the game plan. I just love our set pieces when we get them going like that. That really helps when you can score off some of those set pieces that we’re really dangerous in. It makes for a fun game.

“When you are coaching certain things in practices and then you got out and execute them in games, that’s what you’re hoping for.”

That led to the first goal from Mejia in the 24th minute. A Najib Ortiz corner kick just missed connecting in the box for a header, but the ball landed amongst a plethora of legs.

Mejia won the race to get a foot on the ball, and his shot led to the first cannon blast of the contest that followed each Northwest goal.

“I just saw the chance and I took it. That’s really it,” he said.

Mejia struck again five minutes later, angling a shot into the corner of the net off an Ortiz assist.

“The thing we told them at halftime is that you can’t let up on the pressure,” he said. “You’ve got to win all the 50/50 balls, you’ve got to get the balls up in the air because obviously the wind plays a factor in it. You’ve just got to be aggressive and go win those 50/50 balls, and I thought we did that throughout the game.

“Then we connected on a lot of great passes in that second half and moved it side-to-side, really used our wings well and created some great scoring opportunities.”

The Huskies (10-8) received limited opportunities in the second half, and Trevyn Keene tacked on another score for Northwest in the 77th minute off a Jack Kenna assist.

The Vikings (11-3) host York, who defeated Kearney Catholic 1-0 in the other semifinal, in Tuesday’s subdistrict final at 5 p.m. A win would set up a home district final and place the team one victory away from the state tournament.

The Dukes defeated the Vikings twice this season. York won 3-1 on April 1, then won a 4-3 shootout during the Central Conference Tournament on April 15.

“We’ll need to play a bit better than we did today,” Mejia said. “Even though we played good, we had some ups and downs during this game. We need to improve those little bits.”

In a meet that featured a lot of the state’s best in many of the events, the Grand Island Senior High girls triple jumpers shined.

The 1987 State Football Playoffs were held during the tenth, eleventh, and twelfth weeks of the football season. On Wednesday, November 4, Cla…

Steven M. Sipple: The football was good, and seeing all the fans made for a colossal "W"

The cold and desolate nature of the 2020 season gave way to warmth and good feeling for the 2021 Spring Game, and NU gave fans a decent show.

Class B No. 5-rated Northwest avenged two of its three losses in one fell swoop Tuesday.

The Tri-City Storm saw its bid to win a Clark Cup end early.

Northwest’s Jarit Mejia tries to get a ball past Aurora goalie Jacob Penner Monday night during the Class B, Subdistrict 7 Tournament. Mejia scored two goals during the Vikings 3-0 win over the Huskies.(Independent/Josh Salmon)

Northwest teammates Trevyn Keene and Parker Janky both go for the ball over Aurora's Andrew Bell (11) and Goalie Jacob Penner during the Class B, Subdistrict 7 Tournament Monday at Northwest High School. (Independent/Josh Salmon)