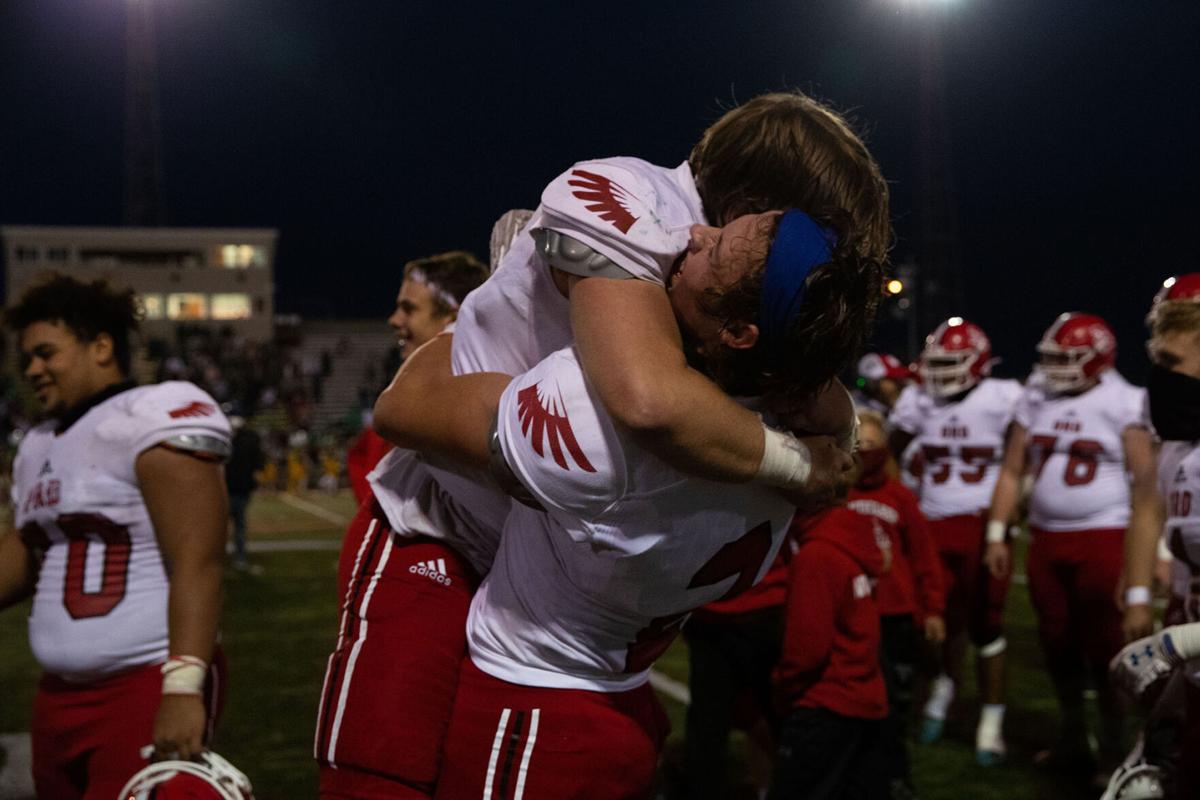 Two Ord players hug after the final seconds of the Class C2 championship game where they defeated Bergan. 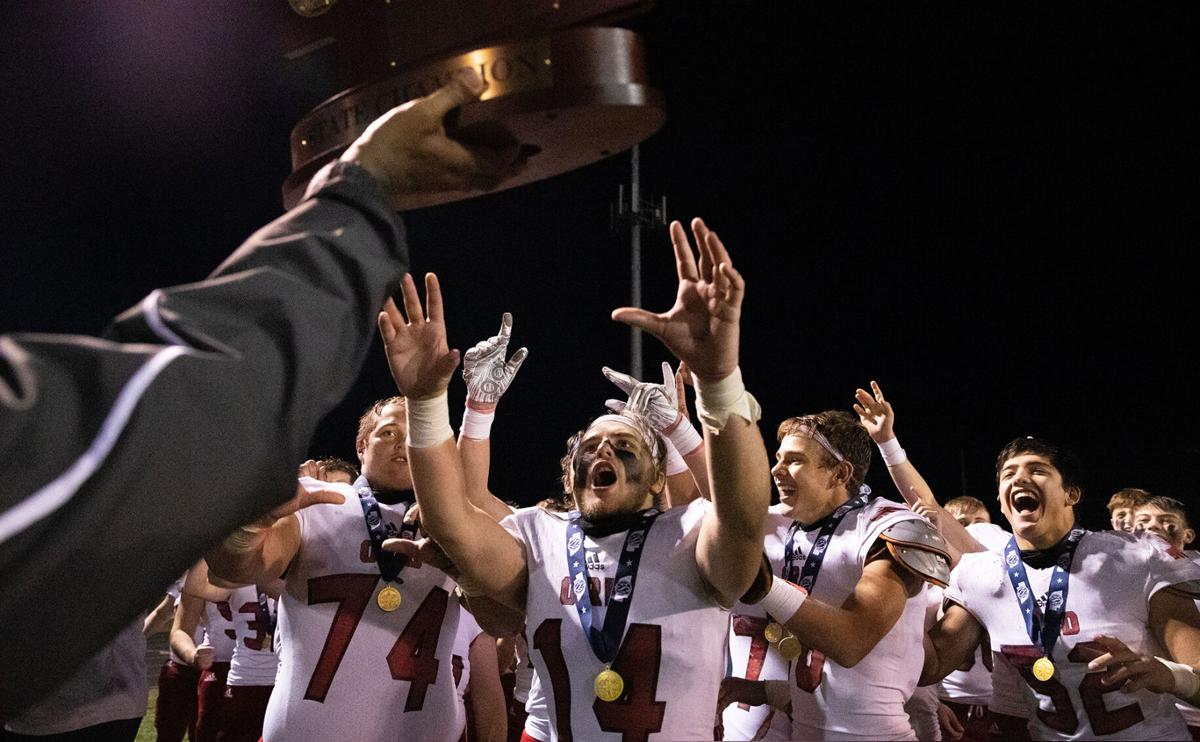 Ord players react as their Class C-2 championship trophy is handed to them after defeating Fremont Bergan. 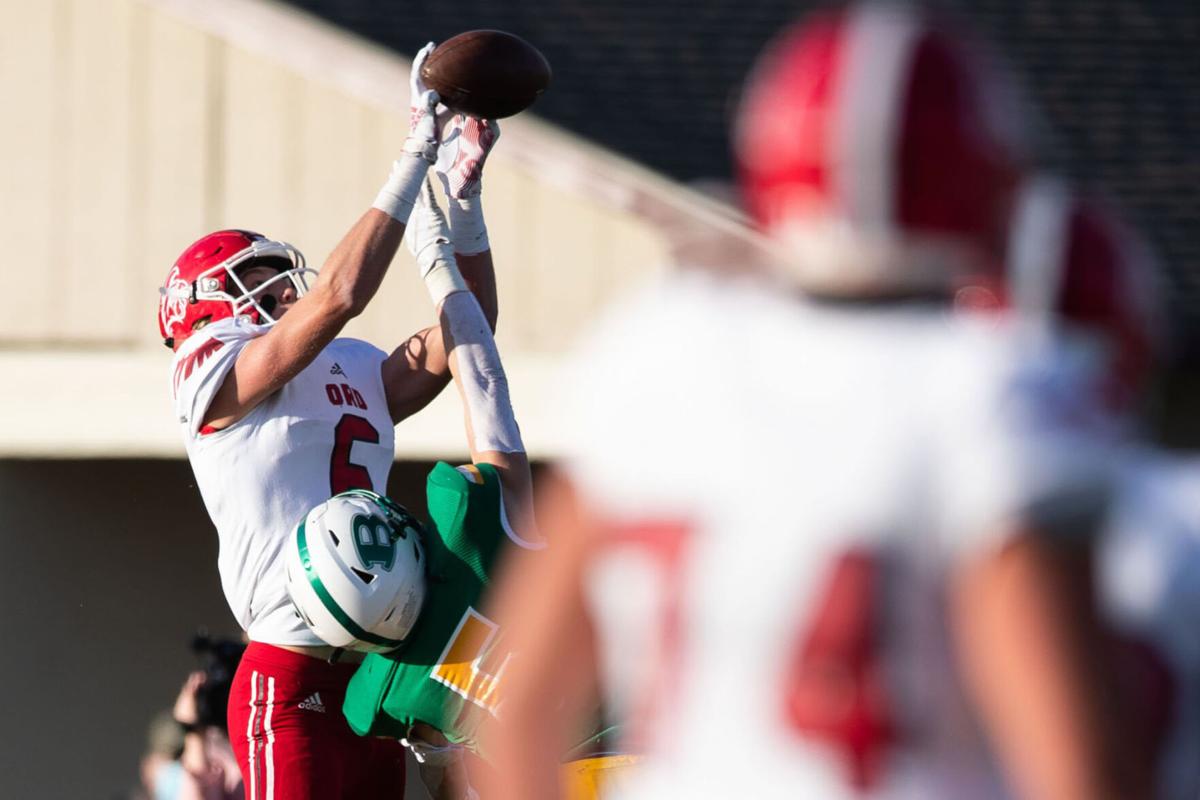 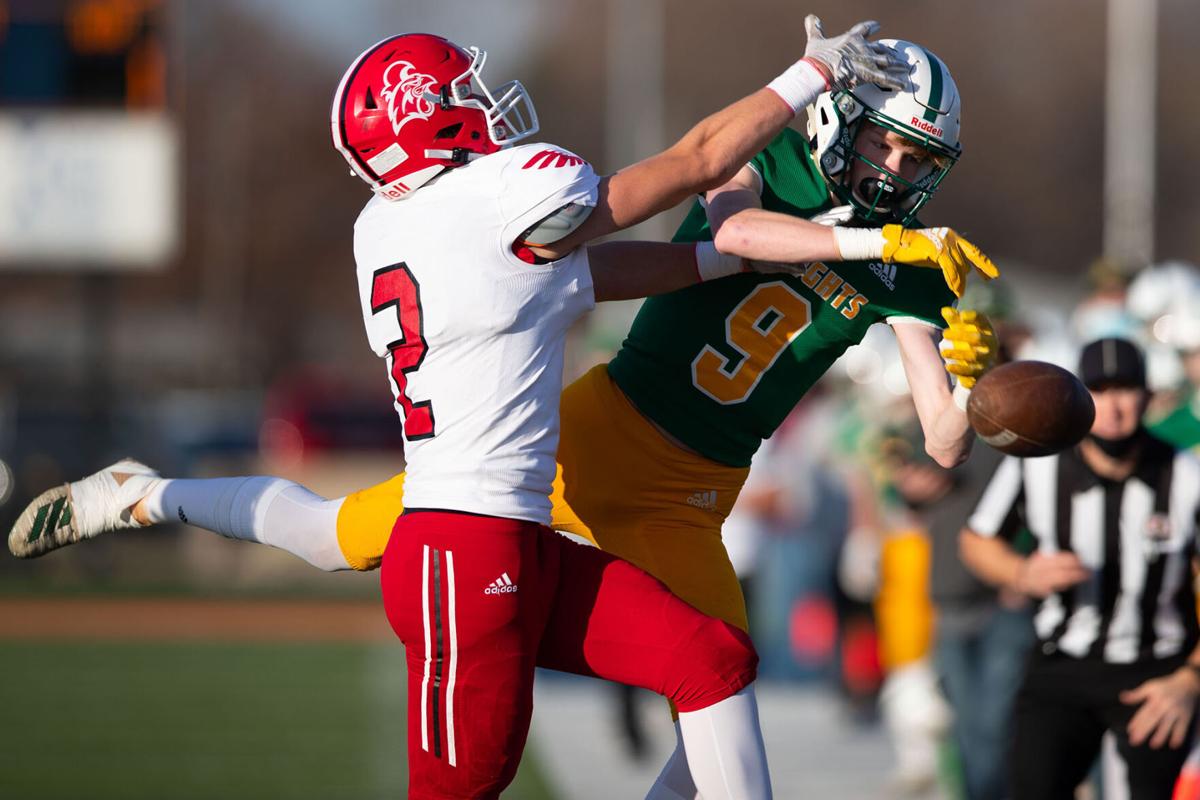 FREMONT — After spending a quarter getting familiar with each other Friday afternoon, Ord decided the courtship portion of the Class C-2 football state championship game has gone on long enough.

The Chanticleers had collected enough intel to score 21 points in the second quarter and eventually post a 28-7 victory over Fremont Bergan before an estimated crowd of 1,200 at Heedum Field.

“I thought both teams played really well in the first half,” Ord coach Nathan Wells said. “We were feeling each other out a little bit, trying to figure some things out. Then we got a couple of turnovers and were able to score off of them.

“When we score touchdowns, it energizes us.”

Turnovers and controlling the tempo were two of the big reasons the Chanticleers were able to win the school’s first state football title. Ord came close two years ago, finishing as runner-up to Aurora in the 2018 Class C-1 title game.

Ord began its initial scoring drive late in the first quarter. It was a nine-play drive that began with senior running back Tommy Stevens turn a screen pass into a 25-yard game and ended with an eight-yard pass from Zachary Smith to Quentin Ries 65 seconds into the second quarter.

After forcing a three-and-out from the Tigers, Ord again methodically worked the ball down the field before committing its only turnover of the game. It was a fumble at the four-yard line, but it took just two plays for the momentum to end up back on the Chanticleers sideline.

Ries picked off a pass from Koa McIntyre and returned it 22 yards for Ord’s second touchdown. Another interception on Bergan’s ensuing drive set up the Chanticleer’s third touchdown in a stretch of just over seven minutes.

Stevens and Smith gained all of the yards on the seven-play drive, with Smith running around right end for the final 19 yards.

“Our tempo bothered them a little in the second quarter,” Wells said. “When we get first downs, we’re hard to stop.”

Bergan coach Seth Mruz said having that many mistakes against a team like Ord isn’t often going to produce the hoped-for outcome.

“We have to string good plays together to put points on the board,” Mruz said. “We just couldn’t do that tonight.”

Bergan did get one string of plays like that. The Knights bounced back to start the second half with a 12-play drive that produced the Knights’ only points of the game.

Jarret Boggs capped the drive with a 1-yard touchdown run with 7:19 remaining in the third quarter. Ord’s response? One final touchdown drive of their own.

Stevens ran for 25 yards and caught a pass for 12 more before running 11 yards through the left side of his line for a touchdown with 4:38 remaining in the third. Stevens led all players with 108 yards on 24 carries.

“The kids worked extremely hard and we have really great leaders,” Wells said. “They’ve learned a lot from former players. This was for everyone who’s been a part of this program.”

2020 Eight-Man Football Championships are as Good as it Gets

The 2020 high school football season may have been in doubt for quite some time, but one thing was never in doubt was the exceptional strength…

Aurora falls to Elkhorn in Class B final

It’s not often that a football team gets a standing ovation at the end of a quarter.

It’s that time of the year to ask the annual question: Who is Burwell playing in the Class D-1 state championship game?

Aurora hopes to claim identity of Class B state champion

After an 0-2 start, Aurora slowly discovered its identity and went on a roll for the rest of the season.

Ord one win away from C-2 title

Two Ord players hug after the final seconds of the Class C2 championship game where they defeated Bergan.

Ord players react as their Class C-2 championship trophy is handed to them after defeating Fremont Bergan.