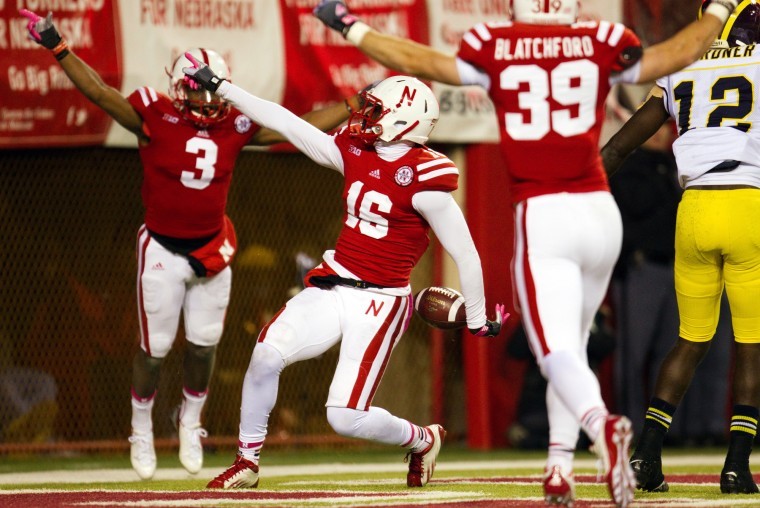 Nebraska corner back Stanley Jean-Baptiste celebrates his interception with 6:56 left in the fourth quarter of Saturday's game against Michigan at Memorial Stadium in Lincoln. Nebraska won 23-9. (Independent/Matt Dixon) 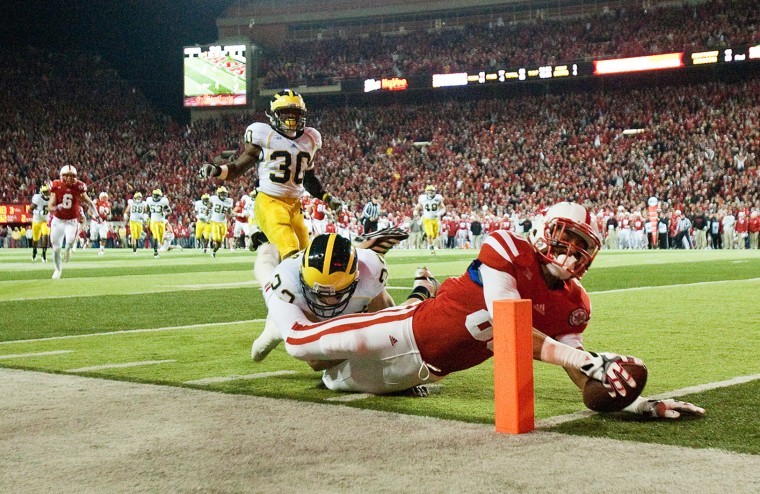 LINCOLN – Michigan’s first trip to Memorial Stadium in 101 years turned into a memorable one for all the wrong reasons for the Wolverines.

But Saturday’s contest was one that put Nebraska in just the position it wanted — in control of its own destiny in the Big Ten Conference’s Legends Division.

The Huskers took full advantage after multi-threat Michigan quarterback Denard Robinson exited with an elbow injury late in the first half, picking off backup quarterback Russell Bellomy three times en route to a 23-9 victory in front of the second-largest crowd (86,160) in stadium history.

The win moves the Huskers (6-2 overall, 3-1 Big Ten) into a tie with the No. 20-rated Wolverines (5-3, 3-1) atop the Legends Division, but most importantly, it gives NU the tiebreaker with Michigan.

“Obviously with the Big Ten standings it was kind of a must have, not that it wasn’t still possible to get to the Big Ten championship, but it was out of our control if we lost it,” said Nebraska linebacker Sean Fisher, who finished with seven tackles. “We kind of talked about we wanted to control our own future, and winning tonight put us one step closer to that.

“Now we can focus on Michigan State.”

That company line was steady from the Huskers about moving atop the division.

“This game just makes the next one more important,” right tackle Jeremiah Sirles said. “Every game we win from here on out raises the stakes more and more to where we want to be, which is a Big Ten champion. This game leads right into the next one.

“Every game is a must win for us because in the Big Ten, both sides are out there for anyone to take. We have to make sure we keep rolling with this momentum into next week and the week after that because it gets more and more important.”

The biggest play of the game might have been on what looked like a routine 7-yard rush by Robinson to give the Wolverines a first-and-goal at the 8-yard line while trailing 7-3.

Robinson stayed on the ground holding his right arm after the tackle and he exited the game with 46 yards rushing and 55 passing.

He finished 3-for-16 for 38 yards with three interceptions and ran five times for 17 yards.

“Maybe we pressured a little bit more,” Nebraska coach Bo Pelini said of his team’s defensive changes when Robinson exited. “We got a little more aggressive on third down, especially after we got a feel for what they were doing and how they were doing it.

“I thought we had a good mix in the second half of playing base, playing some pressure, keeping them off-balance.”

Michigan coach Brady Hoke said Robinson’s injury was to a nerve in his elbow, the same injury he’s been struggling with.

“I checked with the trainers a couple times, but he couldn’t grip the ball real well, and he didn’t feel like he could throw the ball well enough,” Hoke said.

Bellomy, it turned out, couldn’t throw the ball well enough for the Wolverines either.

His three interceptions – one each to P.J. Smith, Stanley Jean-Baptiste and Daimion Stafford – was a welcomed sight to a defense that accepted the traditional Blackshirts following the game after turning them down for not playing well enough a week ago against Northwestern.

“Our guys went up and made some plays on the ball,” Pelini said. “For a while there, I was thinking we didn’t have anybody on the defense that could catch after last week. I think we had five drops (against Northwestern).

“But our guys had some opportunities and made some plays. We needed that.”

Interceptions were a focal point in practices leading up to the Michigan game. All defensive players and coaches had to do pushups following a dropped interception.

Smith estimated the team earned about 120 pushups during the week but he credited those with helping defensive coordinator John Papuchis’ arms growing more muscular.

The teams traded odd interceptions to start the second half. Michigan got its pick first. Linebacker Desmond Morgan tipped a Taylor Martinez pass, and Mario Ojemudia was able to pull it in at the Wolverines’ 46-yard line despite colliding with Morgan when both went for the ball.

The Huskers returned the favor two plays later. As Vincent Smith was going down after a short reception, the ball popped out and Smith took it 53 yards to the 4-yard line.

But Nebraska could only gain two yards on three plays and settled for a 19-yard Brett Maher field goal to go up 10-6 with 11:48 left in the third.

The Huskers got a gift in the form of a personal foul called on backup linebacker Brandin Hawthorne following a Wolverines’ punt to give NU the ball at the Michigan 39-yard line.

NU gained only five yards and again sent Maher out on the field. This time he easily connected on a 51-yard try to push the lead to 13-6 with 8:41 remaining.

A third straight Nebraska possession ended with a Maher field goal when he connected from 31 yards out to make the score 16-6 with 4:43 left in the third.

“I thought we left some points out there,” Pelini said. “There were some drives out there. At times we were pretty good.

“At times we missed opportunities. I think we could have played better. It wasn’t our best effort, but I felt we did some good things. They have a good defense.”

Penalties gave a Michigan offense that had gone three-and-out three straight times a boost. Three flags resulted in 45 of the Wolverines’ 58 yards in a drive that ended with a 38-yard Gibbons field goal to cut the lead to 16-9.

Two of the penalties came on the same play – a personal foul for targeting and an unsportsmanlike conduct on the NU bench – to move the ball to the Nebraska 48.

On the next play, Bellomy made his first completion after starting out 0-for-10. Two plays later came a pass interference call to advance the ball to the 21 before the drive stalled out.

But Bellomy’s passing woes soon continued. He threw a pick right to Stafford on the first play of Michigan’s next possession.

This time NU took advantage. Martinez broke off a 29-yard run to the 12-yard line, and Ameer Abdullah ran it in from there to give the Cornhuskers a 23-9 cushion with 10:19 remaining.

Nebraska effectively ran clock much of the rest of the quarter while the defense was keeping Michigan touchdownless in Lincoln for at least 103 years.

Abdullah finished with what he called a quiet 101 yards rushing. He credited a strategy of running outside early in the game for wearing down the Wolverines’ defensive line to set up runs up the middle late.

Nebraska outgained Michigan 173 yards to 48 in the second half, but it was much more even when Robinson was playing in the first half.

The first quarter ended scoreless, although Michigan had its chance to put points on the board.

At first Roy Roundtree was ruled to have made a diving catch for a 55-yard gain to the Nebraska 17-yard line, but that call was reversed after video review.

“Every point was big in this game,” Pelini said. “They missed one (field goal) that I think hurt them. …We went in wanting to win special teams, and we did a good job. We pinned them down there a couple times and I thought the field position worked in our favor.”

The possession got off to a rough start when a chop block penalty gave the Huskers a first-and-24 from their own 14-yard line.

But Martinez completed consecutive passes to Ben Cotton and Jamal Turner to pick up the first down.

A 19-yard completion to Steven Osborne on third-and-2 moved NU down to the Michigan 32, and on the next play Kenny Bell turned around to make a grab at the 10 and went on to dive into the end zone for the score.

Michigan answered with Gibbons being able to hit a 52-yard field goal with 8:21 left in the second quarter, and he added a 24-yarder on the next Michigan possession to cut the lead to 7-6 with 2:38 remaining after Robinson suffered his injury.

Now Nebraska turns its attention to a road trip to Michigan State – the next most important game according to the Huskers.

“We’ve got to go out, we’ve got to compete, we’ve got to practice hard,” Abdullah said. “We can’t let up. Every week is the most important week of the year, so that’s how we’ve got to take the field at practices this week.”

Nebraska corner back Stanley Jean-Baptiste celebrates his interception with 6:56 left in the fourth quarter of Saturday's game against Michigan at Memorial Stadium in Lincoln. Nebraska won 23-9. (Independent/Matt Dixon)